THIS STORY HAS BEEN FORMATTED FOR EASY PRINTING
Notre Dame 16, BC 14

BC gets effort, lacks result 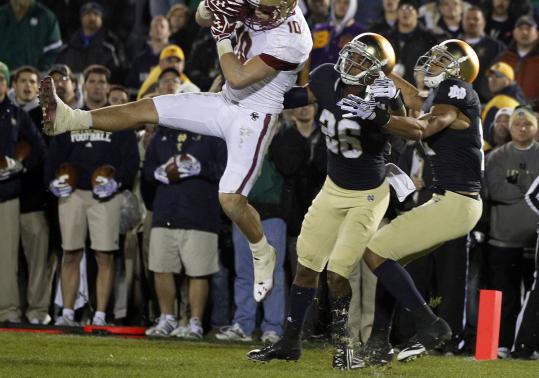 Bobby Swigert’s touchdown catch pulled BC to within 2 with 1:57 left, but the Eagles ran just one play on offense after that. (Michael Conroy/Associated Press)
By Mark Blaudschun Globe Staff / November 20, 2011

SOUTH BEND, Ind. - Boston College came into Notre Dame Stadium yesterday searching for a win and some respect, which has been hard to come by for a team with a 3-7 record.

The Eagles might get a little more respect after making the 24th-ranked Fighting Irish work deep into the fourth quarter, down to the final seconds in fact, before Notre Dame put away a 16-14 victory.

BC closes out its season Friday at Miami.

“We had them, we had them,’’ said All-America middle linebacker Luke Kuechly, who had 14 tackles. “This is so frustrating.’’

The Eagles fell behind, 10-0, in the first quarter but closed to within 13-7 at halftime. They trailed, 16-7, until a 7-yard touchdown pass from Chase Rettig to Bobby Swigert with 1:57 remaining worried the sellout crowd of 80,795.

BC had one timeout left. The options were to attempt an onside kick or boot it deep and hope for a three-and-out.

BC went for the onside kick, which Notre Dame recovered. When asked why he didn’t elect to kick deep and rely on a defense that had basically shut down the Irish since the first quarter, coach Frank Spaziani shrugged.

The Eagles got the ball back at their 20 with eight seconds left, and ran just one play.

Coming up short was the theme for BC all game.

After Notre Dame went 80 yards for a touchdown on its opening drive and then added a 40-yard field goal by David Ruffer with 8:15 left in the first quarter, the BC defense shut down the Irish.

“After the first two drives, we did fine,’’ said Kuechly, who set the ACC career record for tackles and extended his streak of double-digit tackles to 33 games. “We got behind the 8-ball there at the start. But, after that, we outplayed them. We really did.’’

The Eagles at least played on equal terms with Notre Dame (8-3), which finishes its regular season next week at Stanford.

Offensively, the Eagles again showed two different faces, with classic drives early and late and not a whole lot in the middle.

“We mixed it up pretty well,’’ said Rettig, who completed 18 of 38 passes for 170 yards, but was almost flawless in the Eagles’ second-quarter touchdown drive, which covered 80 yards in nine plays and was wrapped up by a 2-yard run by Josh Bordner. “There’s no reason why every drive shouldn’t have been like the first one and the last one. For the first time, I felt like we were spreading the ball around.’’

Bordner’s score pulled the Eagles to within 10-7, but Notre Dame added a field goal at the end of the first half. Neither team scored during the third quarter.

As the game moved into the fourth, the Eagles were holding their own, but not doing much else.

Notre Dame wasn’t doing much on offense either, though Ruffer kicked a 27-yard field goal to make it 16-7 with 8:08 left.

There was plenty of time left for BC, but the Eagles didn’t have the offensive juice to pull off the upset. Rettig, under enormous pressure all day, had 10 straight incompletions in the second half.

He finally found his rhythm on the last drive, with Swigert catching the touchdown as the clock dipped below two minutes. “I almost lost it in the lights,’’ said Swigert.

And Notre Dame almost lost a game it thought it had locked up.

“We had our chances,’’ said Swigert, who, along with tight end Chris Pantale, led the Eagles with five catches. “We had our opportunities.’’

“We needed a couple of heroes, needed someone to step up and make some plays,’’ said Spaziani. “That’s the difference when you’re playing a good football team, you’ve got to make plays. We had our chances.’’