After shocker at school, should sports ever be king? 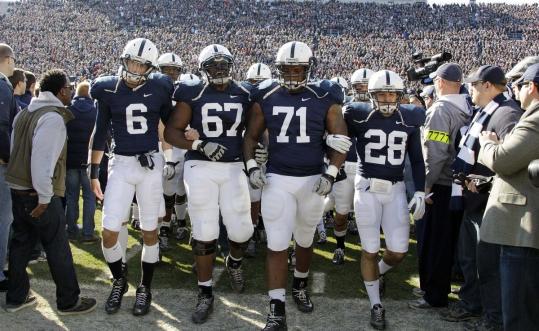 The sexual abuse scandal at Penn State, perhaps the most shameful in the history of college sports, has brought a national outcry, led to the firing of the university’s president and legendary head coach Joe Paterno, and plunged a football-crazed campus into turmoil.

It has also sent a shockwave through higher education, renewing the long-running debate over the outsized influence of big-time college athletics, the entitled status sports enjoy on campuses hungry for prestige and payouts, and the hard trade-offs involved in building competitive teams.

From the power conferences to Division III, the stunning revelations have prompted soul-searching on campuses over the proper role of intercollegiate sports and simmering anger over what critics see as their sometimes corrupting sway.

“You’re making a deal with the devil,’’ said Sol Gittleman, a Tufts University professor and longtime critic of the college sports industry. “It’s big-time money, and these programs become larger than life. It has nothing to do with higher education.’’

With the exception of the University of Connecticut basketball teams, there are no Penn State-like powerhouses in New England, where college teams - at least in the big money sports of football and basketball - are not nearly the fan draw, or booster obsession, that they are in other parts of the country.

Yet even here, aiming high in sports is often seen as a way to raise a school’s profile and attract strong students and faculty. Boston College enjoyed a huge lift in its national profile, and growth in its applicant pool, in the era of Doug Flutie and the 1984 Miracle in Miami.

More recently, the college joined the Atlantic Coast Conference in search of a more prominent platform, especially for its basketball and football teams. And the University of Massachusetts, eyeing the example of rival UConn, is stepping up a level in football in hopes of greater prominence.

The question for many now is how priorities at Penn State got so skewed - it was, after all, a school that prided itself on running a clean program - and whether there are lessons for college athletics generally in the disaster that struck the place they call Happy Valley.

“It’s very hard to grasp that the culture at Penn State allowed this,’’ said Mark Emmert, president of the NCAA. “Certainly something went terribly awry. You can’t allow one person, or any one program, to be seen as more important than the institution as a whole.’’

At Penn State, the game played yesterday, before the usual vast crowd, but with a notable change in tone. Rather than sprint onto the field, the team walked on somberly, arm in arm. There was a moment of silence dedicated to victims of child abuse. Some $22,000 was collected for abuse charities by volunteers. All that was missing was a victory - Nebraska prevailed, 17-14 - and of course Joe Paterno, who was absent from the coaching staff for the first time since 1949.

“This has been one of the saddest weeks in the history of Penn State and my heart goes out to those who have been victimized. I share your anger and sorrow,’’ new school president Rod Erickson said in a video broadcast in the first quarter. “Although we can’t go back to business as usual, our university must move forward. We are a community.’’

It was, in short, a day when the university began to forge its way back, after being slammed time and again this week for seeming to care more about protecting the football program’s storied image than protecting young children.

Authorities have condemned Penn State for failing to report suspected abuse by Jerry Sandusky, a former assistant coach under Paterno who is charged with sexually abusing eight boys over a 15-year span. University employees were told of at least two instances but did not alert police, authorities say. Paterno was told of one, and informed his superiors - but he did not press the matter further.

“Every college and university in the country will be very carefully reviewing their policies around sexual misconduct and reporting of sexual crimes,’’ said Terry Hartle, senior vice president at the American Council on Education, an influential group that represents college presidents.

Hartle and others stopped short of blaming the scandal on the football culture at Penn State, where Paterno was a titanic figure, winning more games than any other major-college coach.

“For all the issues involving intercollegiate athletics, and I’m the first to say there are plenty, I think this is more the setting than the cause,’’ Hartle said.

But others saw a broader context at work, and said the university’s inaction was a clear attempt to protect the well-crafted - and highly lucrative - brand of Penn State football.

“This happened because Penn State decided it was going to put football above all the cherished values of higher education,’’ said Allen Sack, a professor of management at the University of New Haven and prominent critic of major college sports. “In this instance, the entire university bowed to football.’’

At the top levels, college sports are a huge source of revenue, and even at smaller schools, major sports are often seen as a way to generate alumni support and boost their profile with nationally televised appearances.

With that incentive, colleges have spent escalating sums to field top teams. In its report “Restoring the Balance,’’ the Knight Commission on Intercollegiate Athletics found that from 2005 to 2008 athletic spending rose much more than academic spending. In many major conferences, universities spent between six and 10 times more on athletes than non-athletes.

Since most athletic programs do not turn a profit, that spending comes from other priorities, the commission found.

“If the business model of intercollegiate athletics persists in its current form, the considerable financial pressures and ever-increasing spending in today’s college sports system could lead to permanent and untenable competition between academics and athletics,’’ the report concluded.

An earlier Knight Commission survey had found that a large majority of presidents at universities with major football programs said the current trends are not sustainable.

Some critics say the high-stakes pursuit of athletic glory has warped universities’ priorities, and created in some athletic programs an insular, above-the-rules mindset.

“When you get to that level of finances, sometimes people make egregious mistakes in judgment,’’ said Dan Lebowitz, who directs Northeastern University’s Sport in Society center. “What happened at Penn State shows how sports trump too many things. In this instance, they trumped basic ethics.’’

James Antony, an administrator and professor at the University of Washington who has directed a program for prospective college sports administrators, said the scandal raises hard questions about whether sports are too central to campus life.

“We have a responsibility to ask ‘Are we keeping this in perspective?’ ’’ he said. “We need to remember that Penn State is bigger - and its obligations are bigger - than the football team.’’

But many critics question whether even a scandal of this magnitude will give colleges much pause.

“Five minutes,’’ Gittleman said. “That’s all the time they’ll look at it. You’re not going to break the culture.’’

Charles Clotfelter, a Duke University professor and author of “Big-Time Sports in American Universities,’’ said the Penn State scandal is “an order of magnitude different’’ from others that preceded it, and that universities need to have a frank conversation about the tension between sports and academics.

“This is a tremendous commercial enterprise that sits inside many prestigious universities, and yet we haven’t really acknowledged it,’’ he said. “It’s time to be a little more open about it.’’