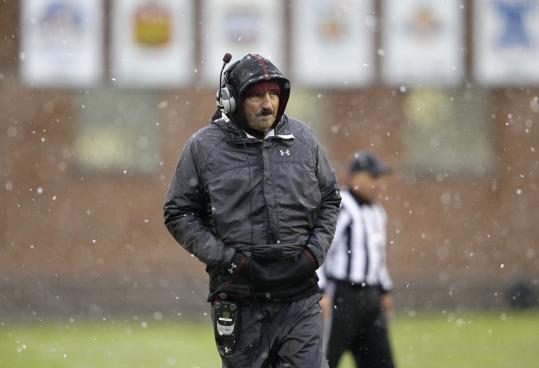 Frank Spaziani knows his team must win out if they want to play in a 13th straight bowl game. (Patrick Semansky/Associated Press)
By Mark Blaudschun Globe Staff / November 3, 2011

The schedule says that after tonight, Boston College has three more games remaining in its football season. And no matter what happens in the prime-time tussle with Florida State at Alumni Stadium, coach Frank Spaziani’s team will adopt its “one game at a time’’ mentality each week.

But make no mistake, the Eagles will bring a postseason mind-set into their meeting with the Seminoles for a simple reason: Unless they win, the streak of 12 consecutive bowl games is over.

Having a 2-6 record means BC’s margin for error has evaporated. One more loss will make the Eagles ineligible (only teams with .500 records or better can participate in bowl games).

BC finally turned its season in the right direction last week with a solid 28-17 victory over Maryland in which the defense and offense finally appeared to be on the same page.

With the offensive line starting to perform like a cohesive unit, the Eagles - and specifically running back Rolandan Finch, who rushed for a career-high 243 yards - rolled over the Terps with an efficiency that brought back memories of BC teams that took pride in establishing the program’s reputation as “O-Line U.’’

And the defense came up with enough big plays to neutralize four turnovers that could have and perhaps should have doomed the Eagles. But Maryland had almost as many injuries and inexperienced players as BC.

Such is not the case tonight with FSU.

“They look like the old Florida State,’’ said former BC coach Tom O’Brien, who watched the Seminoles take apart his North Carolina State team, 34-0, last week. “They’re back or close to being back to what they were when they were in the national championship race every year.’’

That, combined with a short week, can’t be good news for the Eagles. Spaziani and his staff have tried to keep the Eagles competitive each week despite an assortment of injuries that turned potential scout-team freshmen and sophomores into first-line participants.

This game will be the biggest test of the season for the Eagles, and their most important.

Spaziani knows that as much as anyone. He knows he will need more than Finch to pull off the upset. He will need quarterback Chase Rettig to provide at least a reasonable passing threat to take some pressure off the running game.

He will need his defense to avoid a letdown, and will need as many healthy bodies as he can muster.

With Montel Harris and Tahj Kimble out and Andre Williams listed as doubtful, the depth chart at running back is down to Finch and . . . all volunteers.

“They haven’t changed on offense since I’ve been playing them,’’ said Spaziani. “They always have a big, well-coached offensive line. They have skilled wideouts. They’ve got running backs that are fast and athletic and they always have a good quarterback.

“Their defense is a different style and they have upgraded their talent a little bit. They have all the parts. They had chinks in the armor for a while, but I don’t see that anymore. They are a top-five team.’’

But the priorities remain the same.

“We have to run the ball,’’ said Spaziani. “Chase is going to have to do more. There will be more on him. We have to create some opportunities [for the offense], too. That’s the fun of it.’’