THIS STORY HAS BEEN FORMATTED FOR EASY PRINTING
BC NOTEBOOK

BC sophomore Finch gaining some steam 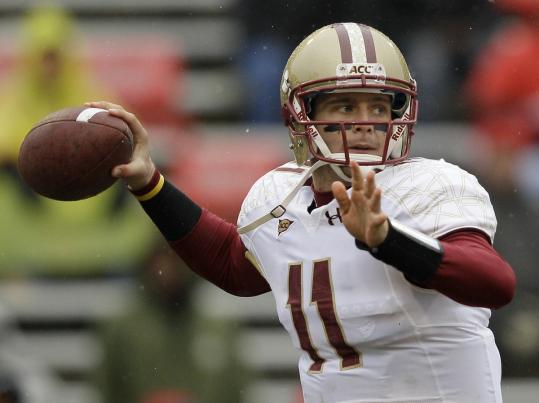 BC’s Chase Rettig searches for a target in the first half. (Patrick Semansky/Associated Press)
By Mark Blaudschun Globe Staff / October 30, 2011

COLLEGE PARK, Md. - The first play of the game was a play-action pass from Chase Rettig to tight end Lars Anderson for a 13-yard gain.

Finch scored from 18 yards on that first drive and finished with 39 carries for 243 yards and two touchdowns in yesterday’s 28-17 win over Maryland. The yardage marked an ACC-best this year.

“I think it was a good performance,’’ said Finch, who moved to the top of the depth chart after injuries to Montel Harris and Andre Williams. “The offensive line did a great job, a lot of the credit goes to them. They were working hard up front. I’m just happy we could come out with a win today.’’

When asked about threatening BC’s all-time rushing record of 264 yards, set by Harris against N.C. State two years ago, Finch laughed. “I didn’t realize I had that many yards,’’ he said.

Middle linebacker Luke Kuechly came into the day leading the country in tackles per game (16.9) and solo stops (9.7). He had 12 tackles yesterday (seven solo), his 30th straight game in double figures to extend the nation’s longest streak . . . The Eagles came into the game ranked 99th in total defense, while the Terrapins were 109th (out of 120) . . . When Finch scored with just 2:35 elapsed, it marked the fastest the Eagles have scored a touchdown since Nov. 6, 2010, against Wake Forest. BC scored 2:59 into last weekend’s game against Virginia Tech . . . BC had 202 yards rushing by halftime, which was more than the Eagles had totaled in a game this season. They finished with 372 yards on the ground, their first 300-yard game since Nov. 3, 2002 against Rutgers . . . Tough season for captains on both teams. Maryland linebacker Kenny Tate and guard Andrew Gonnella are out for the season with injuries, while BC guard Nate Richman (back) has been in and out of the lineup all year and receiver Ifeanyi Momah (knee) is out for the season . . . BC has a quick turnaround, hosting Florida State Thursday night.