THIS STORY HAS BEEN FORMATTED FOR EASY PRINTING
C. Florida 30, BC 3 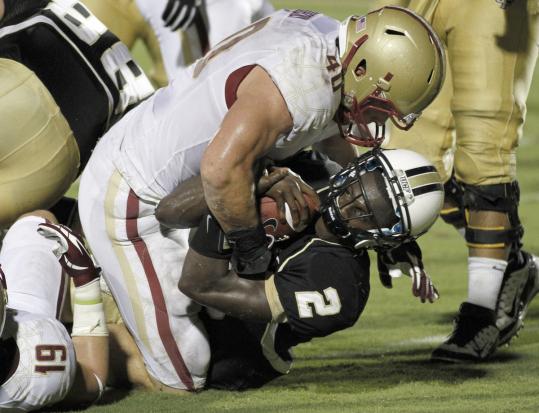 ORLANDO - The road to respectability, not to mention a bowl game for the 13th consecutive season, got a little steeper last night for Boston College when it dropped a 30-3 decision to Central Florida at Bright House Networks Stadium.

Not since BC started 0-2 under Dan Henning in 1994 has a BC team started so slowly. The only good news for the Eagles is that winless Duke comes to Alumni Stadium on Saturday.

Central Florida (2-0) shut down the Eagles’ offense, and wore down BC’s defense.

“We had our chances early,’’ said BC coach Frank Spaziani, after watching his team open with a strong drive, but then get shut down by a defense that has allowed 3 points in two games.

At the start, it did indeed look like the Eagles had shed any lingering negative effects from last week’s 24-17 loss at home to Northwestern.

Quarterback Chase Rettig looked sharp in directing the Eagles’ first possession, which ended with a 47-yard field goal by Nate Freese, who had missed a pair in the opener. But that was the high point for the frustrating Eagles offense. At the half, Central Florida had a 9-3 lead on three Nick Cattoi field goals.

“We shot ourselves in the foot,’’ said Spaziani, who had to reconfigure his defense on the fly when starting cornerback C.J. Jones went down with an injury to his left foot on the opening kickoff. “We didn’t run enough plays. Not being able to do anything on offense had us back on our heels. They wore us out on defense.’’

“It’s very tough,’’ said middle linebacker Luke Kuechly, who led all players with 17 tackles (his 23d consecutive game in double figures). “We were on the field a lot. They hit a couple of big plays on us.’’

If there was a turning point, it came on the opening series of the second half when the Eagles, still within a touchdown of the lead, marched down the field, reaching the the Central Florida 33.

But after having third down and less than yard, BC failed to convert the first down on a pair of runs.

“That killed us,’’ said Rettig, who was harassed all evening and finished 10 of 23 for 70 yards with two INTs and three sacks. “That was a big play for them and certainly would have given us a lot of momentum.’’

Even though BC came up with a fourth-down stop of its own on the next series, the Eagles had emptied the tank. Central Florida, led by the running (13 carries, 69 yards, 2 TDs) and throwing (20 of 25, 187 yards) of Jeff Godfrey, finally got into the end zone on a 1-yard Godfrey plunge on the first play of the fourth quarter to make it 16-3. Two quick scores later - runs by Latavius Murray (10 carries, 72 yards) and Godfrey - and the rout was complete.

After listening to Kuechly explain the defensive effort, Rettig said, “What Luke should have said was that the defense didn’t have anything to play for. We should have put points on the board. The offense and defense work off each other. We’ve got to do a better job of putting points on the board and keeping our defense off the field. They were on the field way too long.’’

Spaziani put it even more simply. “We weren’t able to do what we needed to do,’’ he said. “And we’ve got to get that corrected.’’