To the max on defensive line

Giving it his best is Holloway’s goal 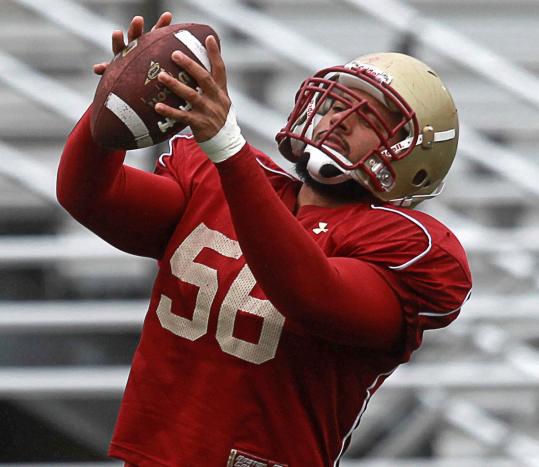 Since he was in high school in Lutz, Fla., Max Holloway has made it a habit to look to the stands and find his father. It’s more strategic than sentimental. The way the father-son dynamic works, something as small as a nod can mean, “Pick it up.’’

His father, Brian Holloway, played eight seasons in the NFL - six with the Patriots and two with the Raiders - and went to three Pro Bowls. He was at Alumni Stadium last week for BC’s season opener against Northwestern, and Max glanced in his direction more than a few times, looking for signs.

Max is fortunate enough to have an expert panel as immediate family. His brother David starred as a linebacker at Maryland, then tripped around the NFL from Arizona to Washington, Cleveland, Jacksonville, and back to Arizona.

David, too, was on hand for the 24-17 loss to Northwestern. He picked up on the little things in his brother’s game, the things that make the inches between good and great feel like miles.

“He basically told me, ‘You were a couple steps away from having a great game,’ ’’ Max said.

Holloway finished with five tackles and a sack, but it was hard not to dwell on the plays he could have made.

His brother and father made sure to get one message across: Don’t harp on it. But it’s hard not to. He knows the recent lineage of BC defensive linemen, the B.J. Rajis and Ron Braces of the world.

“That’s what I’m trying to be,’’ he said. “When I first stepped onto BC’s campus, that was the goal. I didn’t know I was in the room with such greats. B.J., Ron, [Alex] Albright, all these people who are all NFL talent. Now I feel like I’m the leader now, and hopefully I can be like those guys for one of the younger guys.’’

Last season, the defensive line went in as a question mark and ended the season as one of the team’s strongest units. This season, Holloway knows, the line is a question mark again, with two sophomores starting. And when the Eagles gave up 227 rushing yards in the opener, Holloway took it personally.

He heard the talk that the line had gotten pushed around, beaten up, and he couldn’t deny it. Coach Frank Spaziani said the team played “soft.’’

“It was true,’’ Holloway said. “I was looking at the film and saying, ‘God, we don’t look good at all. Not physical. Not really coming after the ball like we should be.’ ’’

Part of it, Holloway said, was Northwestern’s offense.

“We knew they were no-huddle, but we didn’t expect it to be that fast,’’ he said.

It was video game fast.

“No lie,’’ he said. “They would complete a pass for 15 yards or 20 yards, we’d make the tackle, and I’m running back to the line and the linemen are already back in their stances. I was like, ‘You’ve got to be freaking kidding me.’

“It was like someone was holding the triangle button on Madden. I was like, ‘God, they’re not giving us a break.’ ’’

Last year, Holloway saw his window of opportunity crack open midway through the season when Albright broke his leg. Holloway finished second in tackles among defensive linemen with 36. This year, his role is bigger, and he knows his numbers need to be, as well.

Spaziani has certain play calls that give Holloway the green light to wreak havoc.

“He’s been through stuff. He knows what to expect. He’s one of those guys we’ve got to count on. He’s making plays so far.’’

Tomorrow night’s game at Central Florida will be sort of a homecoming for Holloway. He has had the chance to play in his home state before, but UCF, in Orlando, is just 50 minutes from where he grew up.

He is gathering tickets from teammates and bracing himself for the Florida humidity. As far as the heat on the defense to pick it up this week, he doesn’t have a problem with that.

“I wouldn’t consider it pressure, but it’s expectation,’’ he said. “Actually I like that role. I actually like it when coaches come up to me and tell me, ‘All right, we’re leaning on you to make this play.’

“I’m just really excited I can be in this position.’’