BC tight ends may be turned loose 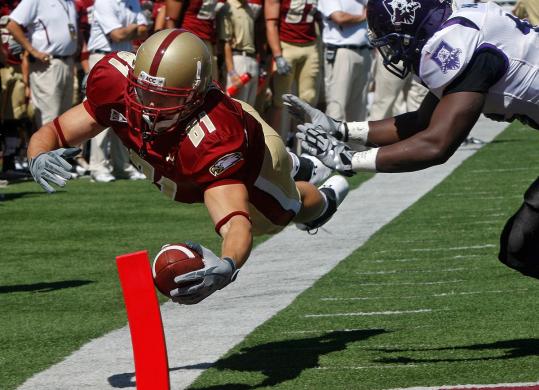 Kevin Rogers came to Boston College with a long résumé, having had experience in college football and the NFL, his most recent stop being with the Minnesota Vikings.

The new BC offensive coordinator also brought with him an outlook on the offense that moves the tight end up on the food chain.

“It gives you a lot of flexibility,’’ said Rogers. “We can do a lot of things. Just look at what the Patriots are doing with theirs, where they are very much in the mix.’’

Not that Rogers is suggesting that the tight ends will become main cogs in the scheme. The offense will not revolve around them. Never has, never will.

But make no mistake, when quarterback Chase Rettig gets in trouble against Northwestern in tomorrow’s season opener, he will be looking for safety valves in his tight ends.

For 6-foot-6-inch, 251-pound junior Chris Pantale and 6-3, 236-pound senior Lars Anderson, it will be a call they hope to answer immediately.

“I think that’s one of the most important things we do,’’ said Pantale, who caught 31 passes in 13 games last season, trailing only Bobby Swigert’s 39 catches for the Eagles. “We want to be a reliable factor for Chase or any part of the offense. We want always to be able to be counted on and not make mistakes.’’

Anderson says he is more of an escape-hatch receiver than Pantale, who also has significant blocking duties.

“I’m like the H-back,’’ said Anderson. “I do a lot of check-downs. I’ve been here for four years now. Being able to be relied upon and being versatile is a good thing.’’

At practice this week, BC coach Frank Spaziani said the tight ends, specifically Pantale, could indeed be a major factor in any offensive success.

“This could be a breakout year for him,’’ said Spaziani.

In the past, tight ends were factors for BC, but not game changers. The offense has run behind talented backs such as Montel Harris and Andre Williams and a beefy, aggressive line.

Rettig, who is beginning his sophomore year, also has a surprisingly deep group of wide receivers, but as Anderson points out, Rogers brings with him an NFL mentality that utilizes the tight ends more.

“If you looked back to the spring game, the tight ends had a lot of catches,’’ said Anderson. “With Coach Rogers coming from the Vikings, tight ends are used a lot.’’

“Which is the way we like it,’’ said Pantale.