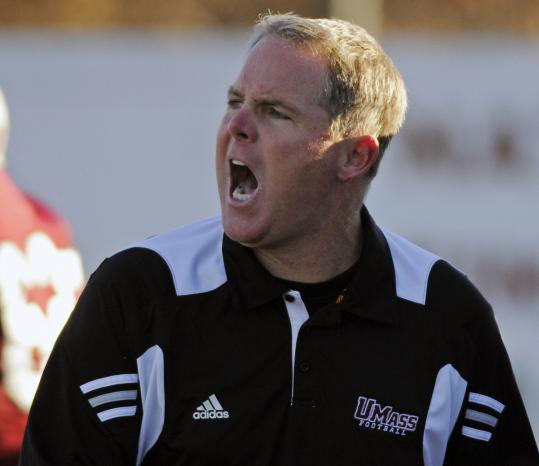 With UMass having no postseason possibilities during its final season in the CAA, coach Kevin Morris will work extra hard to keep the team on track. (File/Nancy Palmieri/Associated Press)
By Nicole Auerbach Globe Correspondent / September 1, 2011

AMHERST - The University of Massachusetts football program is caught between its past and future.

Trophy cases fill the halls of the team’s field house, and the words “1998 National Champions’’ are painted under logos inside Warren McGuirk Alumni Stadium.

Those are relics of the Minutemen’s history in three versions of essentially the same conference: the Yankee Conference, the Atlantic 10, and the Colonial Athletic Association. All three conferences competed at the Football Championship Subdivision (formerly Division 1-AA) level. The Minutemen won the 1998 1-AA championship and were finalists in 2006.

A mile or two from the field house, in the Minutemen’s new football offices, logos of all of the Mid-American Conference teams line the main entrance hallway. They serve as a reminder of what awaits in 2012, the first year UMass will compete at the Football Bowl Subdivision (formerly Division 1) level.

The impending move has brought out a variety of emotions. Understandably, most involved in the program - from athletic director John McCutcheon to coach Kevin Morris - are thrilled.

“You always want to play at the highest level possible,’’ said Morris, who’s entering his third season at the helm. “This move certainly allows us to do so. It definitely solidifies the program.’’

Amid all the excitement surrounding the program, current players have had to pay a price.

Because of the transition, UMass isn’t eligible for postseason play this year - its final in the CAA - or next - its first in the MAC. And that makes preparing for this season different.

“It’s going to be a challenge because of the fact that we are ineligible to go to the postseason,’’ McCutcheon said. “Keeping the guys focused on that and excited for what they’re going to mean for the overall future of UMass football, it’s really important that they understand that. I think they do.’’

For seniors, this transition period is especially tough.

“Some of the seniors [and juniors] were a little disappointed because we can’t play for the CAA championship, which is pretty much the goal every year,’’ redshirt sophomore tight end Rob Blanchflower said. “Because I have an opportunity to play in the MAC for two years, it’s pretty exciting. The younger guys were excited - even the older guys were excited for the transition for us.

“Obviously, there are some slight mixed emotions about moving up.’’

Morris said his players will take a one-game-at-a-time approach to the season, which begins tonight at Holy Cross.

Blanchflower said he and his teammates have broken down their season into smaller goals, too.

“Even though we can’t play for a CAA championship, we can play to be the best offensive [team] in the country, be the best defense in the country,’’ he said. “Shut teams out, put up points, knock people out of the playoffs. We have a very competitive attitude.’’

Despite the two-year postseason ineligibility, there’s plenty of reason to be enthused. UMass’s move comes in conjunction with a partnership with the Kraft family and Gillette Stadium.

This arrangement made the UMass move possible. The Kraft Sports Group will not be charging UMass to play at Gillette. Instead, they will share revenue.

“It was really kind of a chicken and the egg thing,’’ McCutcheon said. “Without Gillette, the conversation wouldn’t have gotten very far. Without a viable venue like that, realistically we couldn’t do it with just what we have here on campus.

The appeal of playing in the Patriots’ home stadium has helped recruiting, Morris said. The team also will increase its football player scholarship allocation from 63 to 85 per FBS requirements.

“On the road this spring after the announcement came out, in the May recruiting period there was a lot of buzz out there,’’ Morris said. “There’s a lot of great talk about UMass, and when they’re talking about your school, that’s a good thing.’’

McCutcheon said the pitch to recruits is simple.

“We can sell them on being the ground floor in this transition, to play in a facility like Gillette, to play a national schedule that we’re putting together,’’ he said.

In addition to games against MAC schools - which will take the Minutemen all over the Midwest, as well as upstate New York and Philadelphia - McCutcheon is hoping to schedule big-name FBS schools for nonconference matchups to draw even more attention. Next season’s home opener will be against Indiana.

Other schools who have made the transition have seen mixed results.

Western Kentucky moved up in 2008, and in their three seasons playing Sun Belt football, the Hilltoppers have gone 4-32.

Marshall jumped to the MAC in 1998, and the Thundering Herd have played in eight bowl games since.

Boise State moved up to the Big West Conference in 1996, and the Broncos’ ascension to the upper echelon of college football has sparked NCAA discussions about an FBS playoff system.

UMass has the luxury of looking at these examples and learning from them, but of course, the Minutemen can’t predict how things will turn out.

The MAC can’t either, but it likes what UMass is bringing to the table.

“The University of Massachusetts will add to the academic stature of the Mid-American Conference and bring a strong tradition and depth to our conference,’’ MAC commissioner Dr. Jon A. Steinbrecher said in a statement. “This addition allows our conference to expand our footprint into New England.’’

College football in this region may never become as popular as the long-standing professional sports franchises. But UMass will become the third team (in addition to Boston College and Connecticut) to compete at the FBS level.

“Us going to Division 1 will really hype up the whole college football atmosphere in the fall,’’ Morris said. “You always have the Patriots and as long as Tom Brady’s there, they’re going to be going places every year. That’s always exciting and keeps football on everybody’s minds.

“Now, with us joining the show with Boston College and UConn, I think that’ll make Saturdays a lot more exciting for football fans as well.’’