Eagles’ Rettig set to wing it around 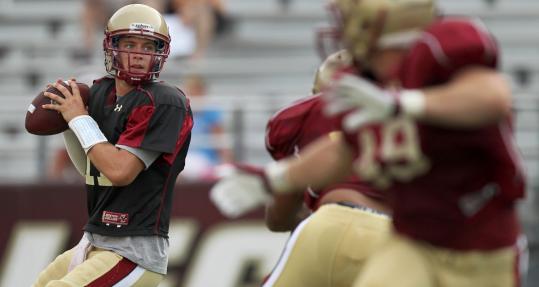 After an inconsistent but promising freshman season, Boston College is eager to see what quarterback Chase Rettig can do in his sophomore campaign. (Jessey Dearing for The Globe)
By Nicole Auerbach Globe Correspondent / August 29, 2011

What’s the best part about a true freshman quarterback? He evolves into a sophomore starter with experience.

And that’s what Boston College has in Chase Rettig, who enters this fall with almost a season’s worth of experience.

Rettig debuted in the third game of the 2010 season and started in nine games, throwing for 1,238 yards with six touchdowns and nine interceptions. Inconsistent, but not bad for a rookie.

Now, with another set of spring practices and August camp under his belt, Rettig looks like a new and improved quarterback - at least according to those who have practiced against him each day.

The defensive backs are getting bored.

“I’ve been talking to the DBs, joking around with them,’’ defensive end Max Holloway said. “[They joke,] ‘Throw me a pick, throw me a pick!’ They’re saying he’s getting so much better.

“He’s making great throws. I was watching film the other day, and I was like, ‘Look at that, that’s a perfect throw.’ He’s gotten a hundred times better since last year.’’

Teammates have used the word “confident’’ to describe Rettig’s demeanor.

“He’s a lot more comfortable with this scheme and the guys on the team,’’ linebacker Luke Kuechly said. “It definitely shows. He’s more confident when he’s passing the ball. He throws the ball better.

“He’s got a better control of the offense, and that’s important.’’

That’s exactly what offensive coordinator Kevin Rogers and coach Frank Spaziani are counting on. Rettig has particularly impressed coaches during recent scrimmages, against a staunch defense.

“There’s a huge difference now,’’ Spaziani said earlier this month. “He’s making tremendous progress mentally. Ever since he started playing in high school he’s been on track. Now he is getting the chance. He’s doing all of the things necessary to get himself in position to get a base hit. Now he has to get the hit.’’

It helps that he’ll have ACC preseason Player of the Year Montel Harris as well as a few receiving threats. Harris, a senior, is already the school’s all-time leader in carries (756) and 100-yard games (21), and he ranks second in rushing yards (3,600). He has the potential to break the conference’s 33-year-old record for career rushing yardage (Ted Brown, 4,602). Harris will miss at least the opener vs. Northwestern after having a procedure on his left knee this month.

What doesn’t help is that the Eagles’ offensive line looks significantly different from last year’s, meaning there could be a few bumps in the road in terms of the running game, pocket protection, and communication.

“We’ve got guys that are stepping in and doing well that didn’t play a whole lot last year,’’ Kuechly said of the rebuilt offensive line.

On the defensive side, the Eagles hope seven returning starters will help them build on what they did during the second half of last season. Over the final five regular-season games, the defense did not allow more than 16 points in any game.

It was the defense - particularly during Rettig’s moments of inexperience - that carried the Eagles to five straight wins to end the season and send the program to the Kraft Fight Hunger Bowl.

Kuechly, an All-American, led the nation in tackles last season with 183. Fellow linebacker Kevin Pierre-Louis recorded 93 tackles, and could have another big season beside Kuechly. The Eagles will be a little shorthanded at safety, though, after Okechukwu Okoroha was dismissed from the team and Dominick LeGrande decided to transfer last week.

But Kuechly said the only limits the defense has this season will be what it imposes on itself.

Holloway said he expects a lot from himself and the rest of the defensive line, and after camp and watching film, he’s confident that the line will be ready to go at the start of the season.

The Eagles hope the defense can anchor a team that was streaky last season. They won the first two games and lost the next five before the strong finish.

Consistency is the goal this time around, though a challenging schedule awaits.

The Eagles will play Virginia Tech and Notre Dame (both ranked in the Associated Press Top 25) on the road, as well as home games against No. 6 Florida State and Miami.

The Eagles feel a good start can set them up for a consistently successful run.

“Obviously, we’ve got to take care of the first game first,’’ Kuechly said. “It’s going to be a difficult season, and we’ve got a tough stretch of road games toward the end.

“The thing with us is we need to start out fast. If we start on a hot note, we’ll build confidence heading into those tougher road games that we have down the line.’’

Nicole Auerbach can be reached at nauerbach@globe.com.