THIS STORY HAS BEEN FORMATTED FOR EASY PRINTING
BC FOOTBALL NOTEBOOK

Depth at the Heights 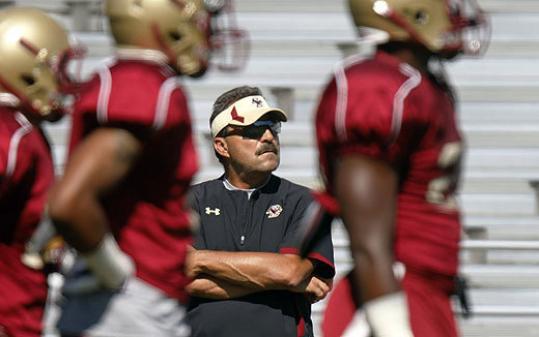 There is a plan in place, said the Boston College coach during media day yesterday. There is still much work to be done, starting with the regular-season opener against Northwestern Sept. 3 at Alumni Stadium.

If you believe the preseason polls, the Eagles are going to be in the back of the pack in the Atlantic Division of the Atlantic Coast Conference.

Too many question marks and a challenging schedule - Northwestern, Central Florida, Massachusetts, and Notre Dame are the nonconference foes - await Spaziani.

But none of that bothers him.

“For the first two years, we were looking for a quarterback,’’ said Spaziani, who has found one in sophomore Chase Rettig. “Now we’re looking to find a backup. That’s progress. Before there was no one there.’’

When Spaziani goes through the depth chart, he sees positions where there are virtually no battles for starting spots.

“Look at running back,’’ he said with a smile knowing he has Montel Harris, who is closing in on becoming the ACC’s all-time leading rusher, and solid runners in sophomore Andre Williams and redshirt freshman Tahj Kimble.

“We’ve got some good kids,’’ he said. “Now they have to prove themselves. We’re doing what we are supposed to be doing. We’re laying a foundation.’’

But Spaziani also knows he has some true freshmen providing back up, which is always risky business.

“You always want more, of course,’’ said Spaziani with a laugh. “And we are not that deep. And we’re not quite where we want to be, but we are headed in the right direction.’’

Some players say things are different this season.

“There’s a feeling of togetherness,’’ said linebacker Luke Kuechly, a first-team All-America selection in 2010. “We feel that we have the back of the offense and they have our back when we need them.’’

Rettig appears more mature and confident than he was a year ago when he was thrust into the starting role three games into his freshman season.

Harris is an All-ACC first-teamer, and Williams is ready to become one. Colin Larmond Jr., after a year off because of knee surgery, and Ifeanyi Momah, who has lost 20 pounds, lead the receiving corps, along with stars in waiting Bobby Swigert and tight end Chris Pantale.

Even the kicking game, which was solid with punter Ryan Quigley and kicker Nate Freese last season, appears stronger.

“Last year, we were comfortable kicking from the 30-yard line,’’ said Freese. “This year we want to increase that to the 35 at the very least, which I feel I can do.’’

“The goal,’’ he said, “is to win the Atlantic Division, then to win the ACC championship game in Charlotte, and then get to the Orange Bowl.’’

Strong competition One spot where battles for starting jobs are being waged is linebacker. Sophomore Steele Divitto is battling junior Nick Clancy for the slot on the strong side. Divitto cleared up a question regarding his first name, confirming his mother was a fan of novelist Danielle Steele . . . For freshman defensive end Mehdi Abdesmad, who grew up in Montreal, BC is the first school he has attended where English is the main language . . . Freshman linebacker Sean Duggan continues the tradition of St. Xavier of Cincinnati players with BC links. Former coach Tom O’Brien and former players Alex Albright and Nick Larkin are St. Xavier products. BC also recruited Graham Stewart and Steve Daniels from the high school, but Stewart opted for Florida and Daniels did not have the grades and may apply at BC for January admission . . . The first scrimmage is tonight . . . Former BC QB Brian St. Pierre will be a sideline reporter this season for WEEI.