THIS STORY HAS BEEN FORMATTED FOR EASY PRINTING
BC Notebook

Rettig on a new level

QB comfortable as camp kicks off 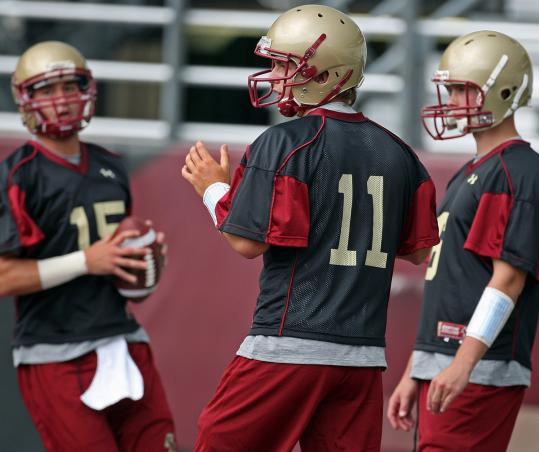 Chase Rettig has chatted with Tom Brady and Matt Ryan about playing quarterback, has a year of classes under his belt, and has played almost a full season for Boston College.

So, how would he grade his performance last season as a freshman? “Probably about a C,’’ he said with a smile yesterday, the first day of summer training camp.

“I don’t think the stages I went through were too big for me,’’ said Rettig, who made his collegiate debut in the third game of the season, a prime-time appearance against Notre Dame. “Just being out there increases your comfort level, increases your experience.’’

Rettig played in nine games, throwing for 1,238 yards with six TDs and nine interceptions. He had a TD pass against Notre Dame and then suffered a foot injury and had to sit out a week before returning against Florida State.

Like the Eagles (7-6), Rettig had an up-and-down season. He won the quarterback derby against sophomores Dave Shinskie and Mike Marscovetra, and played in losses to Notre Dame, Florida State, and Maryland. But he was at the helm when the Eagles went on a five-game winning streak to earn a spot in the Kraft Fight Hunger Bowl against Nevada.

The learning curve for the 6-foot-3-inch, 212-pound Rettig was steep, but the experience he gained was invaluable.

He is BC’s starting QB, something he only hoped to be when he arrived at The Heights from Sierra Madre, Calif.

“There’s a huge difference now,’’ said coach Frank Spaziani, who has five QBs in camp. “You don’t want to see any quarterback looking over his shoulder if he can help it. They still have to earn their job like everyone else. But he’s in a position now where he has to move forward. We don’t want him to look over his shoulder. He’s making tremendous progress mentally. Ever since he started playing in high school he’s been on track. Now he is getting the chance. He’s doing all of the things necessary to get himself in position to get a base hit. Now he has to get the hit.’’

In high school, Rettig wasn’t sure where he would end up in college.

“I wanted an offer so bad and I wasn’t really getting any,’’ he said. “I went to a lot of camps and changed high schools and then had an offer from BC and then I got an offer from Tennessee and it kind of picked up.’’

Rettig settled on BC and was thrown right into the fire, showing what his coaches called “swagger’’.

With new offensive coordinator Kevin Rogers promising to open up the playbook and with stellar offensive threats in running back Montel Harris and wide receiver Colin Larmond Jr., Rettig sounds like he’s embracing the swagger.

“It’s been great,’’ said Rettig. “I feel [Rogers] is the best coach we could have gotten. He’s a great teacher. The offense we’re running now makes a lot of sense. I’m really looking forward to opening the book up.’’

Rettig also is opening himself up. When Ryan returned to watch this year’s spring game, the Falcons quarterback talked with Rettig about life at BC. When some of the Patriots worked out at Alumni Stadium during the NFL lockout, Rettig got to meet Brady.

“He just wished me good luck and said he would be following what I did,’’ said Rettig.

Rettig, who wore No. 7 last season, trotted out yesterday wearing No. 11.

“[That was ] my number in high school,’’ said Rettig. “Last year, I just took what they gave me. But this season I had a choice and I picked No. 11. It’s my favorite number. New number, new QB.’’

Appointed leaders BC elected its captains after practice: linebacker Luke Kuechly, defensive back Donnie Fletcher, wide receiver Ifeanyi Momah, and offensive lineman Nate Richman . . . All of the Eagles with the exception of injured offensive tackle Mike Goodman (leg) are in camp . . . Spaziani elevated backup punter and holder Gerald Levano to full scholarship status . . . The Eagles’ first practice in full pads will be Friday, with the first scrimmage Saturday . . . Other number changes were Larmond from No. 10 to 1, wide receiver Johnathan Coleman from 80 to 14, and linebacker Kevin Pierre-Louis from 32 to 24 . . . Freshman offensive lineman Dave Bowen will wear No. 74, the number worn last year by offensive tackle Anthony Castonzo, who was a first-round pick by the Indianapolis Colts.