Eye-popping numbers tough to bring down 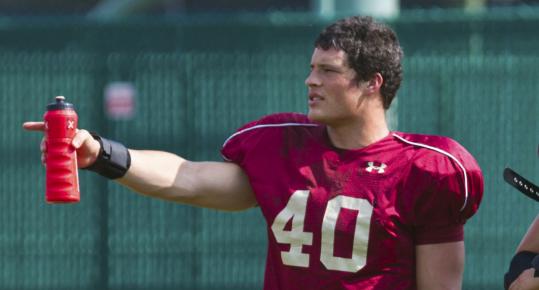 Luke Kuechly is a finalist for the Nagurski Award, awarded to the best defensive player. (File/Aram Boghosian for The Boston Globe)
By Bob Ryan Globe Columnist / November 23, 2010

“You buy a ticket to a BC game and you get entertainment,’’ said Boston College coach Frank Spaziani. “Suppose you go to the game with a guy from Finland, or somewhere. He doesn’t know a thing about football. You say, ‘The idea is to get to the guy with the ball. Watch No. 40.’ ’’

The coach is referring to sophomore linebacker Luke Kuechly, No. 40 for the Eagles and No. 1 among college football players in getting to the ball and making the play.

Kuechly has been in on 161 tackles this season, 25 more than Memphis’s Jamon Hughes. Kuechly made a name for himself last season as an extremely precocious freshman, and in his second season he has found himself among the game’s elite, having been nominated as one of five finalists for the Nagurski Award, given to the defensive player of the year.

Coach Spaz said he’s in no position to evaluate the competition other than Clemson defensive end Da’Quan Bowers, perhaps, but he does feel pretty safe in saying “it’s hard for me to believe anyone has been more productive than this kid.’’

The production is truly astounding. Starting with Game 5 of the 2009 season, when he had 12 tackles against Florida State, Kuechly has had at least 10 in every game. That’s 20 straight heading into the regular-season finale Saturday at Syracuse. Twice this season he’s had 20.

Kuechly is 6 feet 3 inches and still listed at a relatively string-beany 235 pounds, which is hardly a Southeastern Conference, Big Ten, or Atlantic Coast Conference physique. The present is pretty good, but Spaziani practically salivates when he thinks of the future.

“He’s nowhere near where he’s going to be physically,’’ the coach said. “He’s only now starting to get really physical. In the beginning it was, ‘Oh, wow, he gets to the ball.’ Now he’s spinning guys around.’’

Did anyone from BC really know what they were getting when assistant coach Ben Sirmans, in the course of his Ohio recruiting, checked out the kid from Cincinnati’s St. Xavier, where Kuechly was a hybrid linebacker/strong safety? No way. How could they? No one was even sure what he was. Check that. They knew he was a good football player from a good football school that already had given them the likes of Nick Larkin and current defensive end Alex Albright. But no one was projecting him to be an instant starting linebacker.

“Sometimes people get carried away with the numbers,’’ said Spaziani. “The elite schools might say, ‘We’re not in the developmental business,’ and pass on an in-between kid.’’

The BCs of the world are happy to take that chance. “We get two-star players and turn them into five-star players,’’ said Eagles defensive coordinator Bill McGovern.

And when Mark Herzlich was stricken with Ewing’s sarcoma and Mike McLaughlin tore an Achilles’ tendon, there was a need for a linebacker and an opportunity for Mr. Luke Kuechly to show what he could do.

“I was just trying to figure out what college football was all about,’’ Kuechly said.

Here’s what the coaches figured out: Kuechly was a natural.

“He has that innate instinct you can’t coach,’’ Spaziani said. “And the bigger the situation, the better he gets.’’

Kuechly has been used at both the “Mike,’’ or middle linebacker slot, and “Will,’’ or weak-side backer position. He’s currently playing the Mike, which Spaziani thinks takes better advantage of his mobility and whatever that honing device is that takes him to the football.

And while Kuechly always will have responsibilities, Spaziani doesn’t want him to get too hung up on the details.

“I learned a long time ago that when you have someone like this, all you do is line him up and then get out of the way,’’ said Coach Spaz. “Let him play.’’

That’s sound journalistic advice, too. When you’re attempting to portray a kid like this, the best thing is to toss the ball to the coaches and get out of the way.

In McGovern’s 12 years at BC he’s been blessed to coach some fine defensive talents, Herzlich included. But Kuechly forces him into another conversational gear.

“Two things really stand out,’’ McGovern said. “At the meetings he always asks questions and they’re always good questions. He wants to know what’s going on, and why.

“Secondly, last year we were happy with what we were seeing from him in the practices. And then we started to scrimmage. It was, ‘He’s always at the ball.’ He sees it and he goes and gets it. He plays fast. Some guys are just like that.

“His approach is just what you’d imagine it to be. He studies. If he’s not the first guy on the field, he’s the second. And he’s stayed very humble through this whole thing.’’

Spaziani chimes in with the big one. “He’s the Matt Ryan of defense,’’ said the mentor. Around these here parts, there is no higher praise.

“Personality, leadership, intelligence, football skills, he’s got them all,’’ Spaziani said. “He has handled this whole thing the way Matt did.’’

A Nagurski Award wasn’t part of Kuechly’s master plan. He says he wanted to go to a school that wasn’t “gigantic,’’ and then he had to be reassured that BC was the right place when Jeff Jagodzinski bungled his way out of town.

“But the defensive coaches were still there, and Alex Albright told me he was sure Coach Spaz would be a great head coach, so I came,’’ he said.

When the injuries to Herzlich and McLaughlin opened the door, Kuechly was anything but sure he was ready for the job. (Spaziani said that in a normal circumstance he probably would have been redshirted). “I was just hoping I wouldn’t get crushed,’’ he said.

So now that he’s nominated for the award, you know he’s going to tell you it’s not all about him.

“When you are nominated for an award like this, it’s not just a reflection of you,’’ he said. “It’s the other players and coaches, too. You don’t get anywhere by yourself. They all work as hard as I do, but I’ve been put in this situation. They have all helped get me where I am.’’

Well, yes, football is a consummate team sport. But even that guy from Finland would pick out No. 40.