THIS STORY HAS BEEN FORMATTED FOR EASY PRINTING
BC Notebook 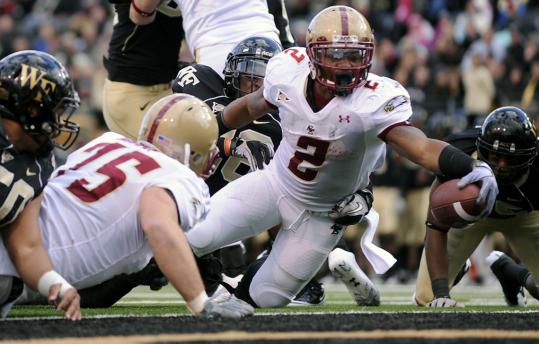 WINSTON-SALEM, N.C. — Anthony Castonzo can concentrate more on football now, his flirtation with a Rhodes Scholarship over. But Boston College’s left tackle still can do advance work toward a degree in the National Football League.

Yesterday was a start in the right direction, as Castonzo and his linemates pounded the ball down the field to set up a 25-yard field goal by Nate Freese, the final points in BC’s 23-13 win over Wake Forest.

“It was great, we were running power, getting 5 and 6 yards a pop,’’ said Castonzo, who has been a fixture at left tackle since he arrived at BC four years ago. “We kind of imposed our will. It was exactly what we wanted to do. We were pretty amped up on that drive. We just simplified things. We ran one play over and over again.’’

As for the Rhodes Scholarship? “Unfortunately, I did not get the invite for the interview,’’ said Castonzo. “That’s over.’’

Castonzo did receive an invitation to play in the Senior Bowl at the end of January, an opportunity to solidify his position as a first-round draft pick.

He’s No. 1
Montel Harris was the offensive star of the game with 183 yards rushing and three touchdowns, and is now BC’s all-time leader with 19 100-yard games, breaking a tie with Derrick Knight and Mike Cloud. Harris also surpassed former North Carolina star Amos Lawrence as the Atlantic Coast Conference’s most prolific rusher through his junior season. Harris has 3,377 rushing yards; Lawrence had 3,273.
Rack ’em up
Sophomore linebacker Luke Kuechly again led the way for the BC defense with 14 tackles, extending his streak of double-digit games to 18, the longest active streak in the nation. Kuechly had 10 tackles by halftime . . . Senior cornerback Chris Fox recorded the first interception of his career . . . Freshman Johnathan Coleman led the Eagles with three receptions for 59 yards, all of them key catches . . . BC had four interceptions, all in the first half, its most since Nov. 8, 2008, when the Eagles had four against Notre Dame . . . Guard Thomas Claiborne (back) and defensive tackle Jaryd Rudolph (knee) did not make the trip . . . Although both players are injured, defensive cocaptains Alex Albright (leg) and Wes Davis (neck) came out for the pregame coin toss for the Eagles.