THIS STORY HAS BEEN FORMATTED FOR EASY PRINTING
College football notebook 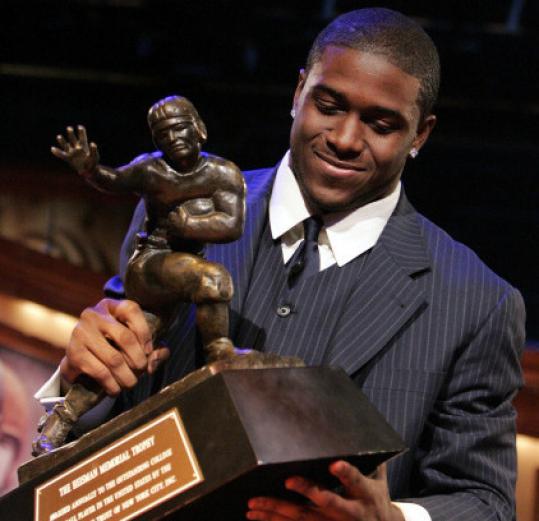 Reggie Bush took the unprecedented step of giving back his Heisman Trophy yesterday, saying the scandal over improper benefits while he was a star running back at Southern California should not stain “the dignity of this award.’’

The New Orleans Saints star won the Heisman — symbol of the best player in college football — in 2005.

Returning the trophy has no practical effect on Bush since he’s already in the pros and a member of a Super Bowl championship team. However, it is the first time in the award’s 75-year history that a player has forfeited it.

USC was hit with heavy sanctions by the NCAA this summer after it determined Bush and his family had received hundreds of thousands of dollars in gifts from two fledgling California-based marketing agents. The NCAA ruled that Bush was ineligible for the 2005 season, which opened the possibility that the Heisman Trophy Trust would take back the award.

One of the few guidelines given to Heisman Trophy voters is that a player must be in compliance with NCAA rules to be eligible for the award.

“The persistent media speculation regarding allegations dating back to my years at USC has been both painful and distracting,’’ Bush said in a statement. “In no way should the storm around these allegations reflect in any way on the dignity of this award, nor on any other institutions or individuals.

“For the rest of my days, I will continue to strive to demonstrate through my actions and words that I was deserving of the confidence placed in me by the Heisman Trophy Trust.’’

Shortly after USC was sanctioned, the eight-member trust, based in New York, said it was considering what to do about Bush, who won in a landslide vote over Texas quarterback Vince Young.

The trust met yesterday; it had no comment. Whether the 2005 Heisman will be vacated or given to Young remains to be seen.

Allegations of improper benefits to Bush and his family led the NCAA to come down hard on USC. The penalties levied included the loss of 30 football scholarships over three years and vacating 14 victories in which Bush played in 2004 and 2005.

Gators star arrested
Florida receiver Chris Rainey was arrested and charged with aggravated stalking, a third-degree felony, for allegedly sending a former girlfriend a threatening text message. The school did not announce any disciplinary action against the junior, but offensive coordinator Steve Addazio said, “Chris Rainey is not a part of our team right now.’’ According to Gainesville Police, Rainey sent the woman he dated on and off the last three years a text message that read, “Time to die, [expletive]’’ after leaving her home . . . West Virginia cornerback Brandon Hogan was suspended indefinitely after a drunken driving arrest Sunday— his second run-in with police in five months . . . Pittsburgh defensive end Greg Romeus, the Big East co-defensive player of the year, will have surgery tomorrow to repair a disk in his lower back and will miss an undetermined number of games . . . Miami’s players just got a direct message: No more Twitter. The 17th-ranked Hurricanes have been told to stop using accounts on the popular social network, the university’s athletic department said — making the announcement through its own Twitter feed. The statement read: “Football program has asked players to shut down Twitter accounts. Goal is to limit distractions & focus.’’