UMass lineman blocks out the anguish 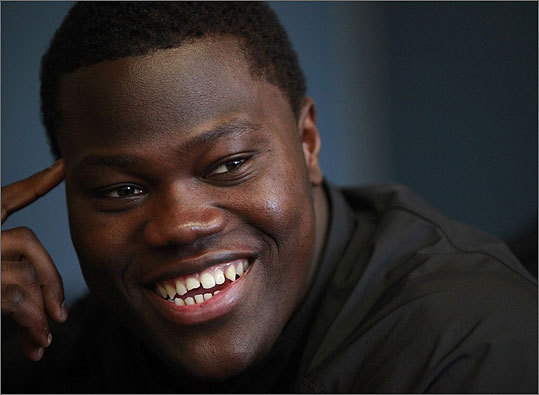 (Steven Senne/AP) University of Massachusetts offensive tackle Vladimir Ducasse, originally from Haiti, speaks with a reporter on the school's campus, in Amherst, on Friday, Jan. 22. Ducasse, who has lived in the United States since he was 14, is headed to the Senior Bowl college all-star football game with thoughts of impressing pro scouts, and concerns about his native Haiti.
By Albert R. Breer Globe Staff / January 27, 2010

MOBILE, Ala. - Vladimir Ducasse doesn’t watch the news, so he doesn’t have to see the images.

His family is fine, so he doesn’t have to worry about them.

He’s plenty busy, so there is enough to take his mind off the terror.

But the big tackle from the University of Massachusetts, who is on the Gulf Coast this week to audition for NFL scouts at the Senior Bowl - just a body of water away from his native land - does care about his home country of Haiti, rocked by an earthquake two weeks ago that qualifies as one of the greatest natural disasters of our time.

The natural question he, and so many other Haitian-Americans, have asked themselves is how they can help. The best answer for Ducasse is to knock it out of the park this week, and keep hitting home runs all the way up to the April draft.

“I just don’t like thinking about it,’’ Ducasse said. “I have a lot going right now, lots of positive things. I can’t worry too much about the negative.

“I just want to be able to give back, donate money, food, clothes. Wherever I go, no matter how much I’m making, I know I’m going to have the possibilities to give back.’’

By the looks of it, Ducasse is going to be able to give plenty back. The 6-foot-5-inch, 330-pound Minuteman’s star has risen to the point where he may well be a first-round pick. Surprised? Those around him no longer are.

But his story isn’t the most common one.

Ducasse and one of his brothers ar rived in Stamford, Conn., to live with an aunt and uncle from Haiti midway through his freshman year of high school, and he came to Kevin Jones’s football team during spring practice of his sophomore year.

At the time, he couldn’t tell a hash mark from a foul line. Which, when Jones took a look at him, didn’t matter much.

“We have our tryouts in the spring and he came out and said, ‘I want to play,’ ’’ Jones said. “And I looked at him and said, ‘You made the team! Congratulations!’ He didn’t even know what a helmet was.’’

He’d soon find out, and Jones would find out just what kind of kid they had on their hands. Because Ducasse was so raw, the scholarship offers were slow to come. UMass’s came first. Ducasse accepted. And that was that.

Division 1-A schools like Buffalo and Temple knocked on his door, which didn’t matter, because Ducasse had given UMass his word.

“He went up there early, loved [coach] Donnie Brown, loved [assistant] Brian Picucci, trusted them,’’ said Jones. “He was more concerned with the academic feel of the school, and knew he was going to get a good education at UMass.

“The football was kind of secondary, which is a great way to choose a school. As a high school coach, you wish everybody would do the same thing.

“And a lot of schools got frustrated and said some things that were disturbing: ‘Why wouldn’t he want to come to us?’ I said, ‘He’s made his choice, it’s done.’ ’’

Though Ducasse had shown loyalty to the UMass program by sticking to his commitment, he made the coaches earn his trust.

“When he first got there, I don’t know if it was how he was brought up, how he was raised, but he wouldn’t look me in the eye,’’ said Picucci, his position coach for three years before becoming offensive coordinator in 2009. “But eventually, as he started to trust me, things got better for him off the field and on the field. He sat right next to me in meetings, and never left my side.’’

And as he grew closer to his coaches and teammates, he grew as a player.

“He’s the most valuable player on our team, period,’’ Picucci said. “He brings such a foundation to our offensive line. We went to the national championship game when he was a young guy, we won the league the year after that. We’ve had first-team all-league tailbacks, we’ve led the league in sacks allowed, all those things add up to a guy who’s a stable guy, who’s never missed practice and is a leader on the team.’’

So now, the kid who couldn’t buckle a chinstrap as a high school sophomore is months away from become a professional in a sport he’s still relatively new to. Getting there is now his focus.

And he’s blocking out as much as he can of what’s happening in Haiti.

The brother that moved north with him still lives in Connecticut, and his mom had since relocated to Miami.

But his father, stepmother, another brother, and his sister were all in Haiti at the time of the devastation. His father remains there, while the rest have moved to Florida.

On the day Ducasse was informed of the disaster, he explains that he “found out that they were OK, and at the time I was working out, and I went back to my daily stuff.’’

He has kept his eye on the prize as the news has become more dire.

“Without question, when it comes to character, dependability - you know, a boy scout? - Vladimir is without question the No. 1 kid we’ve had, and he cares deeply about Haiti,’’ Jones said. “This affected him in the way that 9/11 affected us. It bothers him.

“But he and I also talked about how, in his mind, he knows the No. 1 thing he can do for Haiti is to really do well here, garner a lot of national attention, and that’ll draw more attention to Haiti and that’ll help his country out even more.

“He knows that if he gets drafted and plays in the NFL, he can continue to help. It’s going to be years [of recovery], it’s not going to be six months.

So here he is in Alabama, taking steps to do it in his very own way.