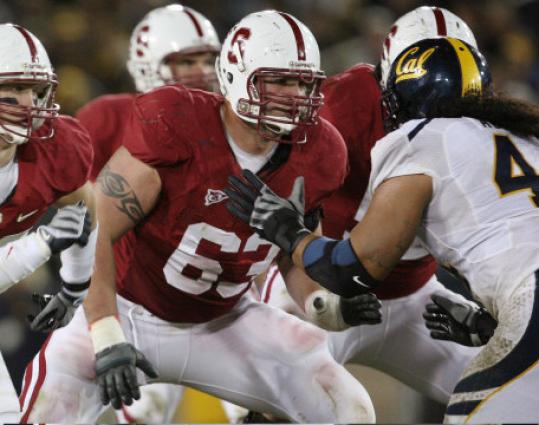 Chris Marinelli of Stanford sets up for a block against California. (David Gonzales)
By Phil Perry Globe Correspondent / January 7, 2010

Chris Marinelli understands football’s great irony. At 6-feet-7 and 300 pounds, he’s not bothered that the game’s largest players are often the least noticed. In fact, it makes him proud. He relishes the digging and scrapping that characterizes play at the line of scrimmage, even if it occurs outside the spotlight.

“It’s about just going out and going to work every day and not making excuses,’’ said Marinelli, who, as a senior right tackle at Stanford, earned first-team All-Pac 10 and second-team All-America honors this season. “If you do all of the little things, everything else will fall in line.’’

Marinelli, whose family lives in Braintree, has seen the benefits of that kind of attitude long before he threw his first block. His father, Jim, has been a member of Tunnel Workers Union Local 88 in South Quincy for close to 30 years, so it was no surprise Marinelli was familiar with the group that works underground and out of sight.

When the members of the Cardinal offensive line considered nicknames before the season, Marinelli suggested the Tunnel Workers Union. For the seldom-recognized behemoths that cleared tunnels for Stanford’s offense, it was a good choice.

“It’s an analogy that fits perfectly for the offensive line because we need to open up holes and grind no matter how we feel,’’ said Marinelli. “The union guys are never recognized for their work, and with offensive linemen, it’s usually pretty similar. It’s just all about having that blue-collar attitude.’’

When Frank Calabro, a Local 88 business agent, heard there was a new group of tunnel workers across the country at Stanford, he sent the team a letter emphasizing the importance of teamwork along with hats emblazoned with the Local 88 logo to wear around campus.

“We couldn’t have been more proud to be associated with the team,’’ said Calabro. “Our saying for the union is ‘Together we can,’ so that’s exactly what I told them. It’s amazing how receptive they were to it all.’’

Perhaps no one benefited more from the line’s new identity than Marinelli. He anchored a unit that plowed holes for Heisman Trophy runner-up Toby Gerhart and helped create the most productive rushing attack in program history. The Cardinal also allowed just .5 sacks per game, second in the nation behind Boise State.

“The Tunnel Workers Union idea has really given us an identity for the team to be successful,’’ said Stanford offensive line coach Tim Drevno. “And it’s something that started with Chris. He’s an amazing leader. I have been coaching for 17 years and it’s so rare to see a young man with Chris’s toughness who is as smart and as football-savvy as he is.’’

In earning its first trip to a bowl game since 2001, Stanford set school records for points, total yards, and rushing yards. The Cardinal rushed for 145 yards and three touchdowns on New Year’s Eve but lost to Oklahoma, 31-27.

The close of Marinelli’s college football career coincided with the completion of his course work at Stanford. He earned his final credits this fall and will graduate with a double major in classics and economics.

Marinelli, whose scope of interests rivals the size of his frame, has translated Virgil’s “Aeneid’’ in its entirety and says he may one day pursue a career in finance.

For now, though, the former Catholic Conference All-Star who pored over Homer’s “Odyssey’’ at BC High has his sights set on completing a trying journey of his own - one that he hopes will end at an NFL training camp next summer.

Marinelli hired an agent this week and will soon begin working out for the NFL Scouting Combine and Stanford’s Pro Day. Before that, however, Marinelli will suit up in the annual East-West Shrine game in Orlando, Fla., Jan. 23.

He said he hopes to be selected in the NFL draft on the weekend of April 22. It would be a new life, with new trenches and a new spotlight to avoid.

Wherever he ends up, he’s sure to bring with him the mentality that has driven him to this point.

“Everyone back at Stanford has been doing interviews and getting jobs,’’ Marinelli said. “Now I’m just trying to live out my dream. I’m going to keep playing until they kick me off the field.’’