THIS STORY HAS BEEN FORMATTED FOR EASY PRINTING
Bowl roundup 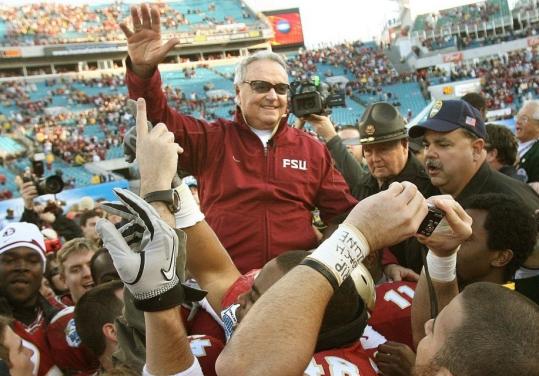 Florida State’s Bobby Bowden was on top of the world after capping his 44-year head coaching career with a victory in the Gator Bowl. (Associated Press)
Associated Press / January 2, 2010

Bobby Bowden watched the clock run down to :00, then took his last walk to midfield as his Florida State players jumped up and down, thrusting their helmets into the air.

The coach went out a winner yesterday, carried off by the Seminoles.

Jermaine Thomas ran for two touchdowns, Florida State scored 20 straight points to take control, and the Seminoles knocked off No. 18 West Virginia, 33-21, at the Gator Bowl in Jacksonville, Fla., in the final game of Bowden’s storied 44-year career as a head coach.

“I will not forget it. I won’t forget the other ones we have here, too,’’ Bowden said, his hands wrapped around the Gator Bowl trophy. “Nothing like a win.’’

Bowden finished with a 389-129-4 record, and most importantly to him, a 33d consecutive winning season. Next week, Jimbo Fisher takes over at Florida State, which finished 7-6 for the third time in four years.

That run of mediocrity was the 80-year-old Bowden’s downfall - he wanted to stay at least one more season - but on this day, none of that mattered to the Florida State faithful, which serenaded him with “Bob-by! Bob-by!’’ chants throughout the day.

With 1:39 left, Bowden trotted down to the Florida State band section, removing his autographed white cap and tossing it into the seats - and the celebration began. When it was over, Bowden was surrounded by a wall of photographers, trying to make his way over to shake the hand of West Virginia coach Bill Stewart - who was a 177-pound walk-on for Bowden’s first Mountaineers team in 1970.

Noel Devine rushed for 168 yards and a touchdown for West Virginia (9-4), which ran out to a 14-3 lead, then sputtered the rest of the way.

“Well, like so many games, when you’re behind like we were in that first quarter, there’s always an opportunity to quit and to give up,’’ Bowden said. “And the kids did not. That’s what you want.’’

Penn St. 19, LSU 17 - Collin Wagner kicked a 21-yard field goal with 57 seconds left, and the No. 11 Nittany Lions staved off a last-ditch drive by the No. 13 Tigers to win the Capital One Bowl in Orlando, Fla.

Paterno got his record 24th bowl win and handed Les Miles his first loss in five bowls as LSU coach.

On the game’s final play, the Wildcats (8-5) sent backup kicker Steve Flaherty onto the field with the opportunity to force a second overtime. But a fake field goal failed when holder Zeke Markshausen took the snap, circled right end, and was forced out of bounds by Auburn’s Neiko Thorpe at the 2-yard line. Northwestern kicker Stefan Demos had been injured earlier in the overtime.

Mike Kafka threw for a career-best 532 yards and four touchdowns, rallying Northwestern from a 14-point deficit in the closing minutes, but also was intercepted five times, twice in the end zone.

Thinking they had won the game in overtime when officials ruled Kafka fumbled when he was sacked for a 10-yard loss, the Tigers (8-5) started to celebrate until the call was overturned.

Four plays later, Demos lined up for a 37-yard field goal to tie but hit the right upright, setting off another premature celebration. This time, Aairon Savage was penalized for roughing the kicker, giving Northwestern new life - but also leaving the Wildcats without Demos, who limped off the field.