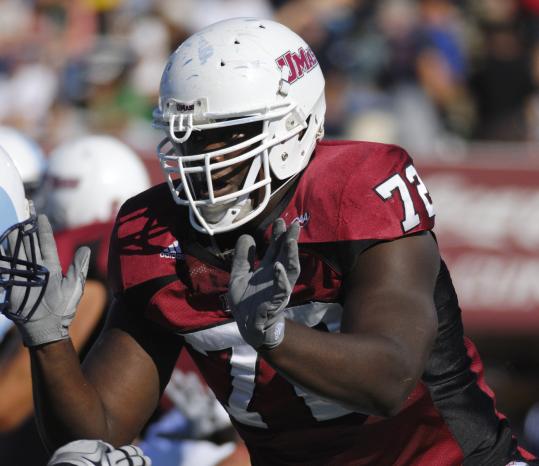 AMHERST - One man can provide only so much protection.

As Delinois Ducasse surveyed the scene in Port-au-Prince in 2002, he was worried for his sons, 15-year-old Macarthur and 14-year-old Vladimir. Haiti was home, of course. It had always been home, but Delinois wanted a big future for his boys, and he wasn’t sure they could find it there. For all the draw of family roots and natural beauty, Haiti had troubled schools and an economy that was one of the poorest in the world. Corruption was rampant. Crime was all around.

Students were sometimes kidnapped coming home from school, recalls Vladimir Ducasse, now a standout on the University of Massachusetts football team. Families that were educated and relatively more affluent - his dad is an accountant - were more vulnerable. Sometimes the kidnapping was so common, Vladimir says, that the schools were closed entirely.

So Delinois Ducasse made a hard decision. He decided to ship his boys up to the United States. His brother, Lezanord, lived in Stamford, Conn., where he drove a cab. It would be a wrenching separation, to be sure - all the more so because the boys’ mother had died when they were just 5 and 6, respectively. He pleaded with them to work hard, to go to college, and to develop a career where they could make some money.

The boys arrived in Stamford, fluent in French and Creole, and speaking hardly a word of English. They moved into Lezanord and Virginia Ducasse’s apartment, which happened to be next to the football field at Stamford High School. That had no significance to Vladimir at the time. The only touchdown he had ever experienced is when his plane landed in the States. He had never even seen the game played.

Today, though, Vladimir Ducasse is a bona fide star at the University of Massachusetts, the starting left tackle and co-captain. He is big and strong, agile and smart, and has a ravenous hunger for hard work. Though UMass currently has three alums playing in the NFL (James Ihedigbo with the Jets, Matt Lawrence with the Ravens, and Jeremy Cain with the Jaguars), none was considered the prospect that Ducasse is.

According to UMass assistant coach Brian Crist, the staff’s pro coordinator, virtually every NFL team has sent at least two scouts to watch Ducasse in practice. He was recently scouted by Chiefs general manager Scott Pioli, who earned his stripes as perhaps the game’s foremost talent evaluator with the Patriots.

“Our assessment is that he’s a great player for us,’’ said UMass head coach Kevin Morris. “It’s up to the NFL to assess where they feel his level is. But there has been a lot of attention, projections that have been extremely high.’’

Ducasse is taking the whole thing in stride. “You don’t want to think about it too much because you can get carried away and forget what you need to do to get there,’’ he said.

He is determined to keep his focus on the matter at hand. Today, the 4-2 (2-1 Colonial Athletic Association) Minutemen take on undefeated and top-ranked Richmond, the defending national champions in the championship subdivision.

A raw talent
Ducasse is a soft-spoken young man with a predilection for precision. Asked if the team’s listing of his size at 6-feet-5-inches and 330 pounds was correct, he shook his head and said in a serious tone, “Nope. 6-5, 328.’’

Not surprisingly, it was his size that first caught the attention of Kevin Jones, the coach at Stamford High. Noticing “probably the biggest freshman I had ever seen,’’ Jones wondered about what Ducasse might be like in pads. Stamford has a large Haitian enclave, and Jones had had a number of standout players who were Haitian émigrés, but Ducasse wasn’t interested. He liked to play soccer and basketball.

A couple of Ducasse’s friends began hounding him, though, and one day after the season was over, Ducasse told Jones he’d like to give football a shot. Jones smiled, and said, “You got it.’’

The first day of spring practice Ducasse started putting his pads on over an enormous turtleneck sweater. “It looked awful,” Jones recalled. “That’s how raw he was.”

But after a year of junior varsity ball, Ducasse got the bug. One day early in the summer he walked from his apartment to Jones’s office to watch film. He stayed for hours. Then, to Jones’s amazement, Ducasse was back the next day. And the next. And pretty much every day of the summer. He studied every high school game he could find, then took in the DVDs Jones had made of the previous year’s college bowl games. “He watched everything,” Jones said. “He’s got this tremendous, tremendous work ethic. From there, he just started to take over.”

Because Ducasse had started football so late, teams like Connecticut and Boston College had their eyes on other, more polished, prizes. During a one-day workout at UMass after his junior year, the Minutemen’s staff was stunned to see someone with such size, strength, and quickness who had not been swallowed up by a bowl subdivision team. Jones remembers UMass line coach Brian Picucci (now the team’s offensive coordinator) staring at him in wonderment. “He kept looking at me, like, ‘Are you kidding me?’” said Jones.

A major force
Ducasse played in four games as a freshman. “College was different,” he said. “It’s a serious business. It wasn’t like high school, where you could pretty much rely on your size. Now you had to use your mind, all your techniques. The speed, I had to get adjusted to, down after down. My first game, it was crazy. I was supposed to block the lineman, and he just walked across my face. I was like, ‘Whoa, what happened?’ ’’

In his sophomore year he became the starter at left tackle, the critical spot on the offensive line designed to protect the quarterback’s blind side. Increasingly, defensive linemen found themselves pancaked into the turf or driven off the play by the relentless Ducasse. He took some of his inspiration from BC senior Gosder Cherilus, a Haitian-born offensive lineman he met over the summer. Cherilus had emerged as a top-flight pro prospect. He was ultimately drafted in the first round by the Detroit Lions, and signed a 5-year contract for almost $15 million.

Last season Ducasse emerged as a force. He was a first-team All- CAA selection, and was voted by his teammates to be a co-captain (along with safety Jeromy Miles). “It’s who he is off the field that’s made him a captain,” said Morris. “Guys who are great players don’t always make great captains. But he’s a hard-working kid. He gets along with everybody, and he does well in school. Everybody on the team looks at him and says, ‘Hey, there’s a guy who’s doing it right.’ ’’

This year the buzz has only gotten louder.

Last week, UMass found itself in a critical spot against fourth-ranked New Hampshire, trailing, 17-13, with just over five minutes to go. The Minutemen knew that a loss - their third - would likely mean zero margin for error the rest of the season if they wanted to make the playoffs. They were playing against the league’s top-rated defense, and they were doing it without their standout tailback, Tony Nelson, who was out with a thigh injury. No running play all game had gone for more than 8 yards.

And then, with a stunning suddenness, Jonathan Hernandez ran left, bursting into the clear for a 42-yard touchdown. It was the play of the season so far, the one that ultimately led to a 23-17 triumph. In the postgame press conference, Hernandez marveled, “The hole was huge.”

On the tape, you can see why. There were great blocks thrown by tight end Matt Silver and fullback Chris Zardas. And then there was big No. 72, Vladimir Ducasse, riding Wildcats defensive end Kyle Maroney hard to the sideline, as if he wanted to personally show him a prize seat in the homecoming crowd.

Ready for next step
Ducasse has not been back to Haiti since he left at age 14, though he says he would like to go at some point. He speaks to his father every week, and knows his dad is proud. His older brother Macarthur is well on his way to becoming an architect. And Vladimir, an African-American Studies major, appears headed to the lucrative career his dad had hoped for - even if Delinois has yet to see a football game himself. Vladimir’s plan is to get his dad tickets for an NFL game next year.