He’s on a Crusade 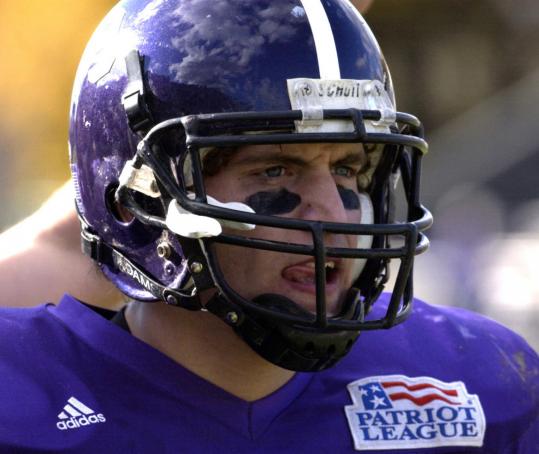 “Really? I didn’t know about any of that,’’ he said. “I just play the game and let the chips fall as they may.’’

The three-time captain does know that all the accolades that come with the records - inclusion on the Walter Payton Award watch list (the Heisman Trophy of the Football Championship Subdivision), a No. 25 national ranking for Holy Cross, and the prospect of being an NFL draft pick next April - will draw attention to the Crusaders’ 2009 campaign.

“All that makes it more fun,’’ he said. “It’s nice. The team is getting more respect. We’re getting Holy Cross’s name out there. But I don’t focus on that. That’s not something I think about.’’

Randolph generally is uncomfortable talking about himself. Coach Tom Gilmore says that’s why he likes his player so much.

“He’s an awfully talented football player,’’ said Gilmore. “The coolness, the experience - he does a great job. But he’s a very unassuming guy, too. He’s a very positive guy who leads by example. There’s a way about him where he brings out the best in the players around him. It’s an invaluable part of him as a football player.’’

Gilmore said he’s had players in the past who were scouted by NFL teams, players who racked up acclaim and awards. In some cases, he would have to sit down and talk to those players to temper them a little, to tell them that they’re not above the team.

“Fortunately, I haven’t had to have that conversation with Dom,’’ he said. “His number-one concern is winning football games. He’s not overly concerned with how he looks in that process.’’

That preseason ranking of the Crusaders may be testament to how other coaches view Randolph’s leadership ability. Holy Cross graduated its two leading rushers (Mike Kielt and Terrance Gass) and three of its top-four receivers (Jon Brock, Brett McDermott, and Ryan McGuire). Gilmore stresses that Randolph will be handing the ball off to Matt Bellomo, an experienced sophomore and 2007 Massachusetts Gatorade High School Player of the Year, and passing to a pair of senior wide receivers (Luke Chmielinski and Taylor Glor).

“A lot of people say that we graduated our two top receivers and that we’re too young, but that’s not really true,’’ said Gilmore. “Our big name guys are gone, but we have three or four guys that played or started consistently last year. We have an experienced quarterback and offensive line who will bring them along very quickly.’’

Randolph’s offensive line includes Aaron Jones, a 6-foot-4-inch, 360-pound senior whom Gilmore calls a “legitimate pro prospect,’’ and center Chris Smith, who also is getting looks from pro scouts, which means Randolph likely won’t be the only one attracting attention. And their star quarterback would love for that to be the case.

“He probably won’t say this, but he’s very unselfish,’’ said Gilmore. “He doesn’t put a lot [of pressure] on himself. Any pressure that he takes on, it just motivates him to work harder.’’