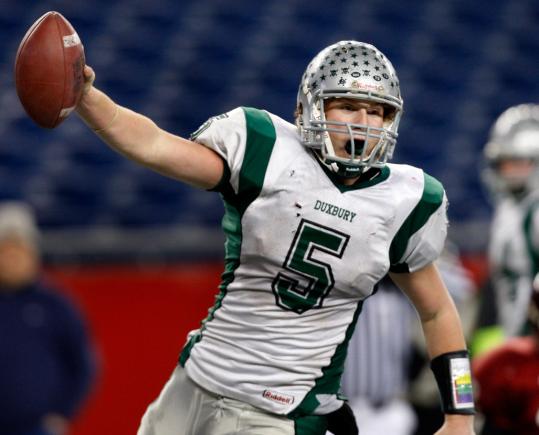 DUXBURY - During his visits to Iowa City, the exchange became familiar for Shane DiBona. He would tell a stranger he had committed to play running back and linebacker for the Iowa Hawkeyes. They would ask him where he was from.

DiBona would answer, "Duxbury, Mass." Brows would furrow, heads would tilt. The questioner would ask again, "Where?"

DiBona's choice represents a meaningful step for Massachusetts. By the end of today, college football's National Signing Day, the state will send three players to powerhouse programs outside the Northeast. Arthur Lynch, a tight end from Dartmouth, will sign with Georgia. Brennan Williams, an offensive lineman from Catholic Memorial, has chosen North Carolina.

Often overlooked as a recruiting basin, Massachusetts rarely produces players who travel outside the Northeast to play for elite programs; the last player Duxbury coach Dave Maimaron could recall earning a football scholarship to a Big Ten school was Everett's Omar Easy, who committed to Penn State in 1996. DiBona, Lynch, and Williams, though, have an opportunity to improve perceptions about high school football in the state.

"Massachusetts gets a bad rap, that these kids can't play at that level," Maimaron said. "When you watch these kids up close, there's plenty of kids from around here that should be going Division 1. It's a shame that doesn't happen more often.

"For those three kids to go, I'm hoping this opens doors not only to kids at Duxbury, but other kids in Eastern Mass. These kids can go and play on a national level. It's saying something. You hope that these kids can have success, and maybe bring some attention to the quality of Eastern Mass. football."

DiBona landed at Iowa largely because of a fortuitous connection. He decided to mail highlight tapes of himself to 20 schools. He and Maimaron compiled the list, mostly schools along the East Coast. As the number of schools grew, Maimaron mentioned Iowa. He had grown up in Quincy with a friend named Chris Doyle, who is Iowa's strength coach. Why not, DiBona decided.

Doyle called Maimaron two days after he and DiBona had mailed the film.

"Would Shane really consider going out to the Midwest?" Doyle asked. Yes, Maimaron told him. "Good," Doyle said. "Because we love him."

DiBona received a letter from Iowa three days later - an official scholarship offer. Less than a week after DiBona had sent his highlight tape, Iowa had come calling.

Wake Forest, Connecticut, and Boston College would show interest later, but DiBona and Maimaron became enchanted with Iowa. They visited Iowa City in April, during spring practice. DiBona loved the enormous stadium. The coaches were welcoming. Downtown Iowa City reminded him of a smaller Boston.

"I felt at home, even though it was so far away," DiBona said.

DiBona also realized how important football is in Iowa. Maimaron later asked Peter Marciano, a quarterback from Brockton who started for Iowa in the '80s, about playing there.

"You're a professional athlete, basically," he said Marciano told him. "Everyone knows who you are."

During DiBona's spring visit to Iowa, in the lobby of his hotel, a security guard confronted him. DiBona wondered what he had done wrong. The guard shook his hand and wished him well on his visit - he recognized DiBona as a recruit.

"I think everybody is a big Hawkeye fan out there," DiBona said. "Everybody loves you."

Maimaron spent the weekend observing the program and meeting Iowa's coaches. He talked with head coach Kirk Ferentz and offensive coordinator Ken O'Keefe, who primarily recruited DiBona. They offered him a chance to sit in on staff meetings.

"I came away thinking I had never met an individual that exudes leadership more in my life," Maimaron said. "I literally came out of there saying, 'This guy should be president of the United States.' You're worried about sending a kid somewhere. You have no doubt that he's going to be taught the right things."

Maimaron was convinced, but he quietly waited for DiBona to reach his decision. DiBona had wanted to play college football since he played Pop Warner, and now, he didn't want to rush. DiBona was once a skinny, 180-pound sophomore. By his senior season, thanks to lifting weights four days a week during the summer, he had become a brawny 225-pound running back. His decision weighed on him, but DiBona never allowed it to show.

"With all that he was going through, he had every reason in the world to not be a leader," Maimaron said. "Kind of worry about himself and put himself first. That never happened. We had three great captains, but he was our best captain. He was the leader of our team."

On Nov. 8, a day after Duxbury improved to 9-0, DiBona watched on television as Iowa toppled then-unbeaten Penn State with a last-second field goal. The stadium trembled as Iowa players mobbed one another. He called his coach.

"I just committed," DiBona told Maimaron. "That was awesome."

DiBona led the Dragons to a Super Bowl championship, and he finished his career with a 41-7 record in four years.

While Iowa pounced immediately, BC showed mild interest early in the process. A coach from BC called him Sunday night, DiBona said, but he told them his commitment to Iowa was firm. DiBona admitted he has some hard feelings about how his hometown college recruited him.

"It didn't work out. They recruit differently than other schools. It's kind of like, with the Massachusetts kids, they think they're going to go to BC. I kind of expected it."

Instead, DiBona will spend his next four years in Iowa. And he will let everyone know just where he is from.