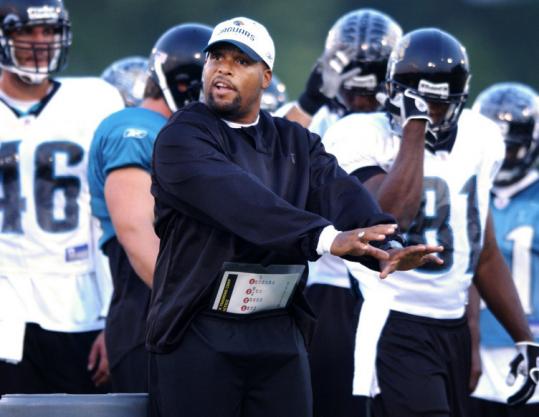 Tom Williams left the Jaguars after two years as an assistant when opportunity knocked to be a head coach at Yale. (file/Jarrett Baker/Florida Times-Union via AP)
By John Powers Globe Staff / January 25, 2009
Text size – +

NEW HAVEN - His temporary home is the Courtyard Marriott on Whalley Avenue, right across from his new office upstairs in Ray Tompkins House. Tom Williams was in town for a few days this month, being introduced as Yale's 33d football coach, meeting with the assistants, greeting recruits, getting his bearings amid the school's Gothic maze.

"It's been a whirlwind tour," says Williams, who comes here from Jacksonville, where he was a defense and special teams assistant with the Jaguars after stints with four colleges and one semipro team in Japan.

But if the school's tradition is any guide, Williams's first head coaching job will be his last. Since 1952, there have been 11 US presidents, six popes, and 17 Red Sox managers (not counting multiple interims) but only four Yale football coaches. "The decision to come to Yale is not a four-year decision," says athletic director Tom Beckett. "It's a lifetime decision."

The last two men to hold the job still are on the premises. Carm Cozza, who coached for 32 years, is Beckett's special assistant as well as the color analyst for WELI radio. Upon retiring in November after 12 years, Jack Siedlecki took a job as an assistant AD. "When you're at a place that long," he says, "you start to become part of the fabric."

For the 39-year-old Williams, that was a major attraction of the job - that it rarely was open. The fact that he'd be Yale's first black head coach, he says, was less important. "That was a factor in my decision, but it was not an overriding factor," says Williams, who was preceded by Columbia's Norries Wilson as the Ivy League's first African-American coach.

It was a confluence of attractions. There was the extraordinarily rich football history - 137 years, more than 850 victories, 26 national titles won or shared, back-to-back Heisman winners. A landmark stadium in recently renovated Yale Bowl. A magnificent campus. A gym that looks like a cathedral. "It's got that medieval feel," says Williams. "It's almost like you're on the set of Harry Potter." Smart, motivated players. And a program that doesn't need to be rebuilt from the basement up.

The Bulldogs have won 23 of their last 30 games, including a 9-1 record and an Ivy crown. Last season, they shut out Princeton for the first time in more than 70 years and handed cochampion Brown its only league loss. Yet that didn't keep Old Blues, disgruntled by seven losses in eight years to archrival Harvard, from calling for Siedlecki's scalp. Winning nine games matters little if you lose The Game. "It's our bowl game," says Harvard coach Tim Murphy, who's won 10 of 15. "End of sentence."

Siedlecki acknowledged the lopsided emphasis on beating Harvard. ("It comes with the territory," he said when he retired in the wake of last season's 10-0 loss.) So does Williams, who'd never seen Yale until he interviewed for the job. "I think you understand that when you come through the door," he says. "That's a game you have to win."

Cultural comfort zone
Had he made a different choice two decades ago, Williams would have played in it. Cozza sent him a recruiting letter but Williams, an imposing linebacker out of Fort Worth, opted for Stanford, where he lettered all four years and captained the 1992 varsity that shared the Pac-10 title and crushed Penn State in the Blockbuster Bowl.

That's where Beckett, who was the school's associate athletic director, got to know Williams. "You could tell he was going to be a difference-maker," says Beckett, who kept tabs on Williams's subsequent progress as a defensive assistant at Hawaii, Washington (under Rick Neuheisel), at Stanford (under present Dartmouth coach Buddy Teevens), at San Jose State, and with the Jaguars.

When Siedlecki retired four days after the season, Yale formed four advisory committees - players, football alums, athletic department staffers, and university officials - to identify a successor who would be the "perfect fit" among a group of candidates that included Don Brown of UMass (since named Maryland's defensive coordinator) and Tom Gilmore of Holy Cross.

Perfect, in Yale terms, means someone who could appreciate the culture of the place without feeling constrained by it, who would understand that the admissions office ultimately selects the team, which is made up of undergraduates who just happen to wear helmets. And someone who planned on staying for a while. "We wanted to get a person who not only fits, but who really wants to be here and isn't necessarily looking at it as a steppingstone," says Cozza, who served on one of the committees.

Fit was important to Williams as well. "The college football landscape is littered with what I think are bad fits," he says. "Coaches are in positions where they don't necessarily understand the culture, the history, and the background of the institution. A knowledge of those things helps you be successful at that place."

Stanford might be at the opposite end of the country, but its culture isn't all that much different from Yale's. "You could close your eyes and listen to conversations on both campuses, and you couldn't tell whether you were in New Haven or Palo Alto," Williams says.

Williams sensed he'd be comfortable with Yale's culture. The question was whether he wanted to leave the NFL after only two years. "I had a conversation about that with myself, about my family and my career track, and what I really wanted to do," says Williams, who has four young children. "I had to make a decision about the direction I was heading."

The chance to be a head coach before he was 40 was a powerful incentive. Dirk Koetter, Jacksonville's offensive coordinator, told him he'd regretted having turned down his own opportunity because he thought he wasn't ready. "He said, 'You're ready for this,' " Williams says. " 'It'll be a mistake not to take advantage of it.' "

Jack Del Rio thought Williams had the goods to be a collegiate head coach. "He just needed an opportunity," says the Jaguars' head coach. "He's very bright, very articulate, and he does a great job communicating with players. He had a lot of ideas about how we could do things. He was always thinking big picture."

Williams's energy and directness impressed the lineups of Yale interviewers. "He seemed genuinely enthused about taking over from what Coach did and taking it to another level," says outgoing captain Bobby Abare. "Usually, we'd have questions for an hour and the interview would be over. But he had questions for us, too, and we were really impressed by that."

Rivalry a top priority
Though news stories prominently noted that Williams would be the program's first black head coach, the school's press release mentioned that fact at the bottom. "The issue of race wasn't a factor," says Beckett. "Finding the right man was the factor. Tom Williams is that perfect fit."

Williams, a Rhodes Scholar candidate and academic All-American who was on the 49ers' practice squad, was the kind of football player that Yale wants to attract and the kind that he says he'll be looking for. "When I'm recruiting, when I'm talking to moms and dads and telling them about the Yale experience, I can speak from true experience," he says. "Because I've done those things."

Williams also played in a storied rivalry - the "Big Game" between Stanford and Cal - which the Cardinal won each of his four years. When he questioned the Yale players, he bluntly asked them why they hadn't been beating Harvard and declared at his introductory press conference that it would be the biggest priority after winning the Ivy title.

"A rivalry is give-and-take," Williams says. "Right now, it hasn't been a rivalry for the last 10 years, so we've got to turn it back into a rivalry. We've got to make this thing as interesting and as fun as it can be."

Not that it's going to be easy. Harvard, which is 64-15 the last eight years with two perfect seasons and four outright or shared league titles, is having its best run in nearly nine decades. And Williams will have to replace nearly three dozen seniors, 14 of them starters, including Abare, an All-America linebacker, and tailback Mike McLeod, the school's career rushing leader.

Still, he'll have a foundation of recent success to build on. "Jack did a great job here," says Williams. "He's won a lot of games, he's won championships, he's recruited well. That's something that I've got to live up to, but I'm encouraged by the opportunity. I certainly don't think it's a daunting task." Nor is Williams daunted by having his predecessor still in the building. "I'm not threatened by Jack being in the athletic department," he says. "I think he'll be a tremendous resource for me."

So Cozza was for his successor, after prudently keeping his distance for the first season. "Carm made my job easier, not harder," says Siedlecki. "I never had any feeling that it was a detriment." Siedlecki says he'll be happy to consult with Williams but wants to give him plenty of space next season. "I don't in any way want to be perceived as a guy looking over his shoulder," he says.

As soon as Yale president Richard Levin formally gave him the job, Williams had a sitdown with Cozza, who came to New Haven as an assistant in 1963. "It's his program," Cozza says. "If he asks me what mistakes I've made, what I'd have done differently, I'll be happy to tell him."

For all of the institutional memory that's available, Williams won't truly know what he's signed on for until September. Despite its gentlemanly image, the Ivy League is fiercely competitive. Within a millisecond after Williams said, "We are going to beat Harvard," word reached Cambridge. "I already sent it to our players," says Murphy, who recently lured away Yale defensive backs coach Tony Reno. "I took it right off the wire."

Teevens, who hired Williams when he was at Stanford, wouldn't comment on him for this story. Dartmouth and Yale have been blood rivals since 1884, when the Bulldogs beat them, 113-0, in their first meeting. Princeton and Yale have been gnawing at each other for 136 years. At Yale, as Williams will discover in November, your coaching career doesn't begin until you've faced Harvard. "Until you actually stand in the tunnel and come out for the game in front of all those people," says Siedlecki, "I don't know if you can ever totally understand it."