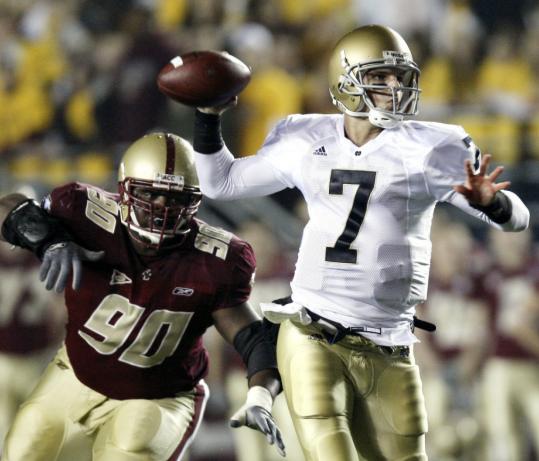 B.J. Raji - and fellow tackle Ron Brace - have made everyone else's job on the Boston College defense a little easier.

For Raji, a 6-foot-1-inch, 323-pound senior who missed last season because of academic issues, this season has been one of redemption.

If the Eagles beat Wake Forest tomorrow afternoon in Winston-Salem, N.C., they will be on the cusp of making it to the Atlantic Coast Conference championship game for the second consecutive season, and Raji will have been an integral part of it.

"A lot of [the credit] has to do with [defensive line coach Jeff Comissiong]," Raji said earlier this week. "Even when I wasn't playing, we would look at film of what I had done before and he would say, 'B.J., on this play you should be doing this. You should be doing that.' "

Raji has been doing the right things more and more this season. In a wild 38-31 win over North Carolina State Oct. 4, Raji sacked quarterback Russell Wilson three times, the most sacks by a BC player since Mathias Kiwanuka had 3 1/2 in a game in 2005.

Raji's stock as an NFL prospect also has been rising. A year ago, he was projected as a middle-round draft choice, which is part of the reason he chose to come back for his senior season.

Now he is ranked from the middle of the first round to the middle of the second round. "It depends on who you ask," said Raji. "It doesn't matter right now because [the draft is] still a few months away. That will take care of itself."

The defense has been the catalyst for the revival of BC's conference title aspirations, which appeared to be doomed after back-to-back losses to North Carolina and Clemson left the Eagles 5-3, 2-3 in the ACC.

But a 17-0 shutout of Notre Dame boosted the Eagles' confidence, and last Saturday's 27-17 win at Florida State enhanced their chances further. Victories over Wake Forest, and Maryland Nov. 29, will put the Eagles in the ACC title game in Tampa Dec. 6.

Raji says he plays only a small part in the team concept preached by defensive coordinator Frank Spaziani.

"I'm having a decent season," said Raji, whose pressure along with Brace's and the rest of the line's has allowed the linebackers and defensive backs to roam more and be more aggressive. "I'm not trying to do too much. I'm not going to force something the defense doesn't require me to do."

The success of the defensive line has had the desired trickle-down effect. "The guys up front are better," said Spaziani. "Raji is playing better and Brace is taking his game to another level."

Raji, who is rooming with defensive backs Roderick Rollins, Wes Davis, and Chris Fox, deflects the compliments to his teammates. "We have smart guys back there," he said.

Two more regular-season games, a possible spot in the ACC title game, a bowl game, and Raji's career at BC will be over.

He has progressed from a year ago, when the unexpected downtime had him pondering if he should stay at The Heights.

"It's much better," Raji said with a smile. "It has been fun this season. We're in a great situation, but we just have to stay focused."