THIS STORY HAS BEEN FORMATTED FOR EASY PRINTING
On college football

It's time Notre Dame earned it

Bowls should stop favoring the Irish 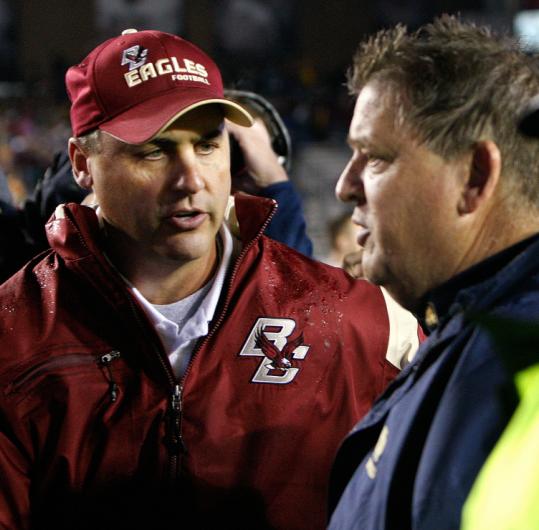 Let's look at some facts as we approach college football's second season. And let's throw in some speculation based on the sometime cryptic messages sent out by bowl representatives.

Oklahoma and Texas Tech will face each other tomorrow night for the lead in the wild Big 12 South race. If Texas Tech wins, Oklahoma will be eliminated from the national championship picture.

If Oklahoma wins, the Big 12 South will have three teams with one loss, which would set up all sorts of possibilities, including a rematch of two of the Big 12 South teams in the Bowl Championship Series title game.

But let's start dealing with simple facts on another bowl issue and see how, once again, perception trumps reality.

: Notre Dame, still perceived as a national attraction after so many mediocre seasons, is bowl-eligible with a 6-4 record going into tomorrow's game against a hapless Syracuse team that just announced the firing of coach Greg Robinson. Let's be generous and say the Irish will be 7-4 going into their regular-season finale against Southern Cal Nov. 29.

Fact: Of the teams Notre Dame has defeated, only Navy (6-4) has a winning record.

Fact: The combined record of the six teams Notre Dame has beaten is 18-46.

Fact: In the Charlie Weis era, the Irish are 12-17 against teams with winning records.

Fact: Over the last 12 seasons, Notre Dame has averaged slightly more than seven wins per year.

Fact: BC is 7-3 going into its final two regular-season games against Wake Forest and Maryland.

Fact: Over the past five seasons, BC has averaged slightly more than nine wins.

Fact: The Eagles have been bowl-eligible for the last 10 seasons.

Fact: BC has won its last eight bowl games.

Fact: BC has beaten Notre Dame the last six times, including a 17-0 victory Nov. 8.

And yet, unless BC wins the next two games and the Atlantic Coast Conference title (with the automatic bid to the Orange Bowl), the Eagles will go to a less prestigious, lower-paying bowl than Notre Dame.

The buzz around bowl circles is that Notre Dame at 7-5 (presuming a win over Syracuse and a loss to USC) will get invited to the Gator Bowl Jan. 1 to face an ACC team; and the Gator Bowl will take Florida State, Miami, Virginia Tech, or Maryland as its ACC representative.

That would be interesting, since BC has already beaten Florida State and Virginia Tech, and will have beaten Maryland if it makes it to the ACC title game.

We all know the bowl business is not so much about how many games are won and lost, but how many people see those wins and losses.

BC - fairly or not - is regarded as one of the "have-nots." Last season was a perfect example: Led by quarterback Matt Ryan, with victories over Clemson and Virginia Tech and a 10-3 record, BC did not get chosen by the Gator Bowl or the Chick-fil-A Bowl, the next two games in the ACC bowl pecking order.

BC went to Orlando and the Champs Sports Bowl, and beat what turned out to be an emerging Michigan State team for the Eagles' 11th victory.

"We did have a great time and we brought about 6,000 people," said BC athletic director Gene DeFilippo.

It is too early in the process to say that BC will be slimed by the bowls again. If the Eagles lose the next two games and finish 7-5, a spot in the Emerald Bowl in San Francisco or the Music City Bowl in Nashville seems about right.

But what if they win the next two and then lose the ACC title game? That would give the Eagles a 9-4 record. That would certainly seem to merit the Gator Bowl or the Chick-fil-A Bowl.

And even if tickets are an issue - the Chick-fil-A Bowl people say the game is already sold out - an SEC team with a large and vocal fan base such as South Carolina or Mississippi could fill the void.

And the Gator Bowl could be bold and take the Eagles. It could tell Notre Dame thanks, but no thanks. It could go out and invite a hungry Big 12 team such as Nebraska or Missouri to face the Eagles.

The point here is simple: Enough catering to Notre Dame.

Let Notre Dame earn its way back into the New Year's Day grouping of bowl games.