Jagodzinski has seen the light 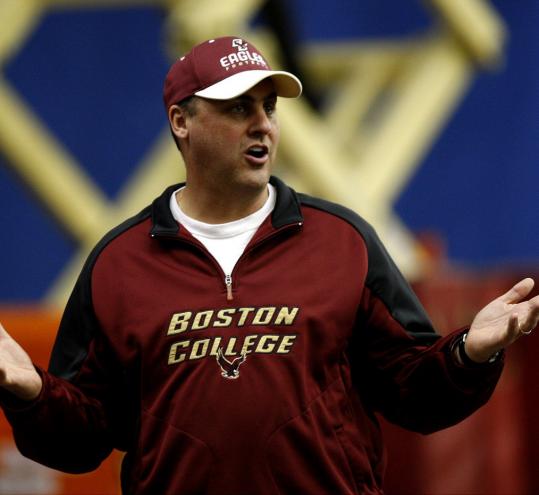 With one year under his belt, Boston College coach Jeff Jagodzinski knows what to expect this season - for the most part. His biggest unknown is at quarterback. (Robert E. Klein/For the Globe)
By Mark Blaudschun Globe Staff / August 29, 2008
Text size – +

He has already thought about what he will say to the team before tomorrow night's opening game against Kent State in Cleveland, just like he knew well in advance what he was going to say to his team before last year's opener against Wake Forest.

Only this time it will be a bit different for Jeff Jagodzinski. The Boston College football coach will be more relaxed - if that is possible for any coach before a season opener.

"This time," said Jagodzinski with a laugh, "I know what I have. I know what to expect. Last year, I really didn't."

Last year was Jagodzinski's first season as the coach of a team with great expectations. Nothing less than a division crown was expected from a veteran Eagles team led by quarterback Matt Ryan and a fifth-year senior class that was on its way to winning the most combined games of any class in BC history.

The Eagles fell short of their ultimate goal - winning the Atlantic Coast Conference title and getting a Bowl Championship Series bid. But they won 11 games, more than any BC team in more than 60 years, and they won their eighth straight bowl game, the longest active winning streak in college football.

Before last year's opener, Jagodzinski sought the advice of veteran BC hockey coach Jerry York about how to know what to expect. "He said, 'You don't.' I said, 'Good advice, Jerry,' " said Jagodzinski with a laugh. "I know the difference between this year and last year is night and day. Last year I was anxious because I wasn't really sure what we had. I knew we had a good run defense and we moved the ball OK on offense, but I hadn't seen it yet in a game."

When Wake Forest came out of the gate and took a 14-0 lead, Jagodzinski was stunned. "The way the game started, I wanted to crawl into a hole. I said to myself, 'This isn't the way it's supposed to work.' "

But the Eagles had Ryan running the offense, and he eventually led the Eagles to a 38-28 victory.

"The issue that most people are anxious about is the unknown," said Jagodzinski. "Now I've been through all the game stuff with these guys that I never was last year. I had no idea how they were going to react. But when I walked among those guys [when the Eagles trailed, 14-0], there wasn't one person panicking. I said, 'There you go, let's go play,' and we did."

Tomorrow night, the Eagles will go play again and Jagodzinski is more sure of what he has, but not at quarterback, where fifth-year senior Chris Crane will make his second career start.

"The unknown for me is my QB," said Jagodzinski. "That's my biggest unknown. I knew how Matty performed last year in practice. I said, 'I think we'll be OK.' Now I'm not sure because it's a different style."

Jagodzinski has confidence in what Crane can do - so much so that the coach temporarily abandoned the idea of inserting backup quarterback Dominique Davis in the second quarter in certain situations.

"My players have no doubt about what their role is," said Jagodzinski. "Every single one of them know. I told Chris, 'Your job is to manage the game. No heroics. You don't have to be Matt. You just have to manage the game for us.' If they do what they are supposed to do, we'll win."

The Eagles went through a light workout yesterday and will have an even lighter workout today before flying to Cleveland . . . Jagodzinski said he gave former BC wide receiver Dominick Magazu's scholarship to sophomore linebacker Mike Morrissey. Magazu left BC earlier this summer and transferred to Appalachian State . . . The Eagles have no serious injuries; everyone is expected to play tomorrow.