THIS STORY HAS BEEN FORMATTED FOR EASY PRINTING
Boston College Notebook 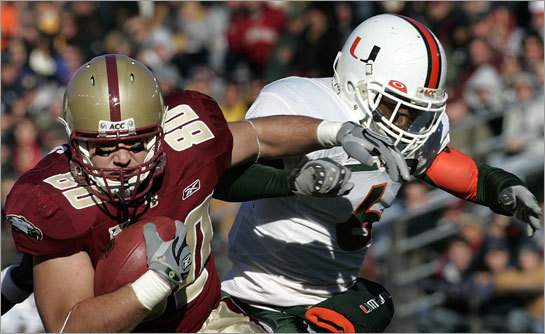 "To be on the brink of a BCS game and championship games my whole career and to get a taste of it last year [the Eagles lost to Virginia Tech in the Atlantic Coast Conference title game, ruining a shot at a BCS berth] and not winning it, fires me up even more," said the 6-foot-4-inch, 260-pound fifth-year senior at yesterday's ACC media day. "It was just a great feeling of getting there and gut-wrenching when we didn't get it."

BC's kindred spirit in the ACC has been Clemson, which is a solid preseason favorite. The Tigers, like the Eagles, always seem to come up short with a championship on the line.

Part of the reason for Clemson's failures the past two years has been losses to BC. This year the Tigers have been picked in the top 10 by many outlets, and return 17 starters, including senior quarterback Cullen Harper and all-conference running backs James Davis and C.J. Spiller.

Harper is excited about his team's chances this season.

"I think we have everything we need to win a championship," the quarterback said.

BC's veterans report Aug. 3. Purvis said that the first glance at running back Jeff Smith was impressive. Smith's 2007 season was cut short by a series of head injuries and it was feared his career was over. After consulting with doctors and the coaching staff, Smith is back in the mix. "It doesn't look like he lost a step," said Purvis. "He is fast." . . . With the 5-9, 198-pound Smith and 5-8, 182-pound freshman Josh Haden, BC could have the smallest and quickest pair of running backs in the ACC. Coach Jeff Jagodzinski, however, has yet to determine what role Smith will have in the offense.