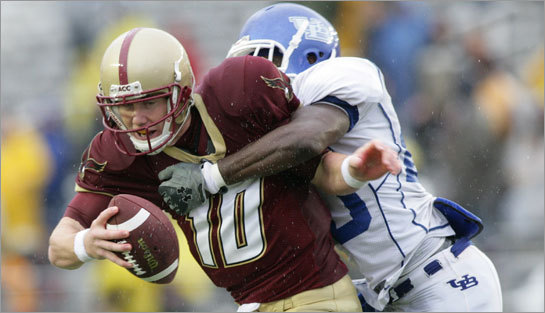 GREENSBORO, Ga. - It is different this year for Jeff Jagodzinski. No longer the new coach on the ACC block, the second-year Boston College football mentor won't have quarterback Matt Ryan around to run his offense.

So what can we expect from the Eagles in the 2008 season, which unofficially got underway with this weekend's ACC football kickoff meetings?

Not much, if you believe the preseason prognosticators who have tucked the Eagles into the depths of the Atlantic Division. With 14 starters returning from an 11-3 squad that made it to the ACC title game before losing to Virginia Tech, the Eagles are in transition, especially on offense as senior Chris Crane gets his shot under center and freshman Josh Haden leads the rushing attack.

Yesterday, two of the players Jagodzinski is relying on to provide leadership, tight end Ryan Purvis and defensive tackle Ron Brace, offered insights on the upcoming season, which kicks off Aug. 30 against Kent State in Cleveland.

"It's going to be leadership by committee," said Purvis, who earned all ACC honors last season with 54 receptions for 553 yards and four touchdowns. "Matt was such a vocal leader. It's hard to replace a guy like that. But we've got a close group of about nine fifth-year guys and we're going to have a veteran in each [position] group and try to control each area."

Purvis probably knows as much about Crane's credentials as anyone at BC, having been his roommate since they were freshman, although that will change this season. "That figures," said Purvis with a laugh, sitting at the Ritz-Carlton Lodge at the Reynolds Plantation yesterday. "It's all set up for me with Chris in our senior year and he moves out, although it won't be too bad. He's only living a floor below me."

Purvis said Crane has similar physical skills as Ryan but with more mobility. What he doesn't know for sure is whether Crane can take over a huddle the way Ryan did, an essential quarterback skill. "We've seen flashes of it," said Purvis. "And we'll see more as Chris gets more comfortable."

Purvis has seen those skills up close and personal, dating back to high school when Crane and Purvis were rivals on Pennsylvania football powerhouses Lancaster Catholic (Purvis) and Trinity High (Crane). "He's competitive in everything he does," said Purvis. "I think it's going to be a smooth transition."

Purvis wants BC to shed its reputation.

"Ever since I've been at BC, we've been the underdog," said Purvis, who said the bitterness of coming so close to a Bowl Championship Series bid last season still lingers. "We have something to prove. The mentality is that BC is perceived as underrated and it's no different this year."

Defensively, despite losing five starters including linebacker Jo-Lonn Dunbar and All-America safety Jamie Silva, the outlook seems brighter. Brace, who will be one of the anchors on the defensive line, believes the defense will be strong, but warns opponents not to take the offense too lightly.

"I think people are overlooking our offense," said Brace. "We don't have that much experience in some areas, but I see us being really stacked."

Still, the absence of Ryan creates a leadership gap. "A lot of guys lead by saying things as well as doing things," said Brace. "My attitude is to lead by example."

Brace says the challenge is obvious to the Eagles. So is the solution. "It's going to be crazy [in the ACC] this year," said the 6-foot-3-inch, 324-pound tackle. "Every team is hungry. We want to win games and work hard and that's what we are going to do."