From walk-on to pro prospect, Spatola handles the pressure 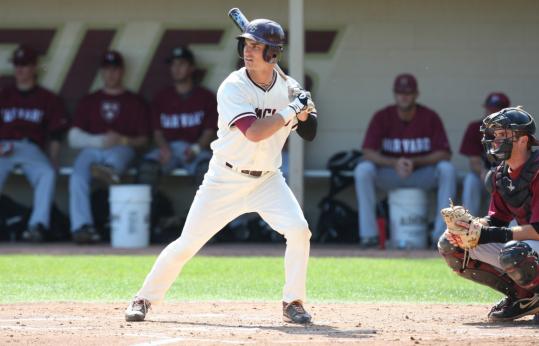 John Spatola was a walk-on athlete at Boston College, yet the former Milton American Legion standout became one of the toughest hitters in his college lineup. (Boston College)
By Phil Perry Globe Correspondent / June 6, 2010

The butterflies were there before every at bat. But with a deep breath as he stepped into the batter’s box for Boston College, he calmed his nerves. Every time.

And then John Spatola went to work, his methodical approach at the plate allowing him to handle those bite-your-nails moments. He was impervious to jitters with the game on the line, and the former Milton American Legion standout often showed a flair for the dramatic.

His story is quite remarkable: a former walk-on who rose to become a highly respected team captain for the Eagles, and a player who will quite likely be selected in Major League Baseball’s first-year draft this week.

Spatola has earned a shot. As a senior, the 5-foot-10, 184-pound outfielder hit .316, belted a career-high 17 home runs — the third-highest single-season total in school history — and knocked in 61 runs.

“Without any question, he was our MVP,’’ said BC coach Mik Aoki after his 30-28 squad was eliminated from the Atlantic Coast Conference tournament in a 12-2 loss to Florida State. “He worked his rear end off and did a phenomenal job leading our kids. . . . I’ve been a Division I baseball coach at some level for 19 years now, and I’ve never seen a walk-on who’s had the kind of impact that Johnnie has.’’

This afternoon at 3, he will cap his collegiate career at Fenway Park, suiting up for the Division 1 team in the New England Intercollegiate Baseball Association All-Star Game, playing a collection of Division 2-3 all-stars.

Not bad for a player who received little interest from colleges after prepping at Roxbury Latin, even though he hit .468 with 22 RBIs in 15 games his senior year. He also helped spark the Milton Legion team to state and Northeast Regional titles. That Post 114 squad included infielder Matt Duffy, the starting third baseman at Tennessee this season after his transfer from the University of Vermont; All-Ivy pitcher Mark Gormley (Brown); and Red Sox prospect Alex Hassan, who starred at Duke.

Spatola chose to attend BC with no guarantees and nailed down a roster spot as a freshman, appearing in 17 games, with five starts. His sophomore year was fairly nondescript, but he broke through in the first round of the NCAA tournament a year ago, at the Austin Regional.

Starting all three games, he belted a go-ahead three-run homer in the top of the ninth inning against Texas State to lift the Eagles to their first tournament win in 42 years.

As a senior, he started all 58 games, often hitting cleanup, and, once again, he delivered clutch hits for the Eagles.

Last weekend, at the ACC tournament in Greensboro, N.C., he blasted a game-tying two-run homer against top-seeded Virginia in the seventh inning. The following day, his three-run bomb against Miami was the key blow in a five-run, game-tying rally in the bottom of the ninth. The Eagles pulled out a wild 12-10 win in the 12th on a homer by Andrew Lawrence.

“You have to want to be up in those situations,’’ said Spatola. “You just treat it like any other at-bat. You might feel [nerves] walking up, but once you’re in the box, it’s just you and the pitcher and hopefully you come out on top.’’

Back at Roxbury Latin, no one is surprised that Spatola, who didn’t make the cut with the Milton Legion team after his freshman year of high school, might be playing as a professional in the near future.

“I’m not shocked,’’ says Roxbury Latin baseball coach John Lieb, who also coached Spatola on the football team. “I’m impressed. If you told me he would do this four years ago, I wouldn’t say it’s out of the realm of possibility because he was such a good athlete. He was never one of these year-round baseball kids, but he had an opportunity to focus on one sport in college and made the most of it.’’

Spatola has been contacted by several Major League teams, including the Rays, Phillies, and Cubs.

Aoki said he believes that because of his performance in the ultra-competitive ACC, Spatola deserves to be taken somewhere on the draft’s second day.

“He has hit some of the country’s best pitching,’’ said Aoki. “That’s not hyperbole. And he has hit consistently for a program that, the last I checked, played the 13th most-difficult college baseball schedule in the country. To me, that merits being taken in the top 12 rounds. Whether or not that will happen, I don’t know.’’

Rather than sit through three agonizing days of following the draft pick-by-pick, Spatola and a few draft-eligible Eagles teammates will hang out, maybe go golfing, and wait to be called.

“I wouldn’t say I’m nervous about it. I’m just interested to see how it goes,’’ said Spatola, who graduated from the honors program at BC with a degree in economics.

“I gave it my all this season, and if 30 scouts don’t think I’m good enough to play at the next level, then I’ll be on the job hunt like every other college senior. If it does work out, then I will dive right in and see how far I can make it.’’

If the call comes, so be it. There will no butterflies.

Phil Perry can be reached at paperry27@gmail.com.