The road to respect 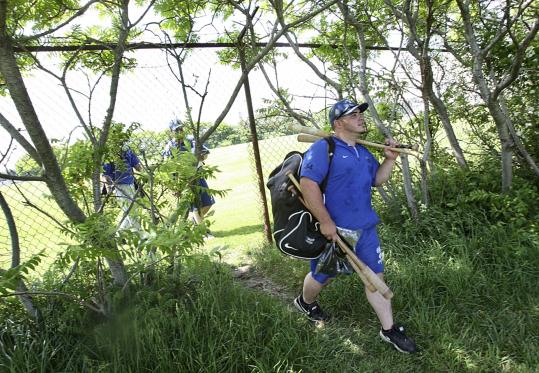 Getting to practice can be inconvenient for Mike Manzo and his team but they’re on their way today to the NCAAs. (Suzanne Kreiter/ Globe Staff)
By Brian McGrory Globe Columnist / May 26, 2010

First off, the players have to climb through a hole in a rusty chain link fence to get to the dusty practice field they borrow from a neighboring high school. The UMass Boston baseball team doesn’t even have its own diamond, which means it plays every game on the road.

Then there are the players themselves. The 24-year-old ace pitcher cooked in a restaurant in the shadows of Fenway Park before his head chef persuaded him to take another run at college. A starting outfielder showed up looking for friends after his rock band broke up. The right fielder was thrown off a rival team. The head coach is a kid himself.

They are, by their own collective admission, something of an Island of Misfit Toys — a group of young men who either dropped out, flunked out, or were ignored by larger and more prestigious schools and ended up together in a makeshift program where the only expectations they faced were the ones they applied to themselves.

Which leads to the most notable fact about the UMass Boston baseball team. Having won its conference, and then the New England region, the team is headed today to the NCAA Division 3 national championship in Wisconsin, where it will square off against some of the most storied small college teams in the country.

Not bad for a commuter school that hasn’t vied for a title in any sport since the track team did it in the 1980s, and certainly has never before had a baseball team like this one.

“We have a whole list of guys who were a step too slow or too skinny or too fat’’ to thrive at schools with better-known baseball programs, said Brendan Eygabroat, the 31-year-old head coach. “We have a group of hard-working guys with a chip on their shoulder who are always playing like they have something to prove.’’

And prove they have. The 2010 UMass Boston Beacons have set school records for most home runs, runs per game, highest average, most stolen bases, most wins, most doubles, and most of just about everything else. Their star second baseman, Ryan Walsh of Newton, has set a bushel of individual records and he still has a year left to play. Five UMass players made the all-New England team.

But while the records and results are impressive, it’s the pockmarked road the baseball team has traveled that makes the squad and so many of its members unique.

Take the facilities. Some of their opponents in the Little East Conference have multimillion dollar ballparks with finely groomed fields. “You should see Eastern Connecticut,’’ said catcher Tim Fontaine. “It’s got stadium seating, a press box, bullpens down the foul lines.’’

UMass Boston has nothing of the sort. Their borrowed practice field has a dried-out diamond, foul lines that are barely visible, and no outfield wall. They play all their games on the road. Yet, it’s a source of laughter, not frustration.

“Some guys said they’d rather play for a team with no field than have a great field and never play,’’ Eygabroat said.

The team is, in many ways, a throwback to the more wistful days of Boston sports, before professional franchises bred an expectation of success by tossing around unfathomable sums of money in pursuit of the best players. At UMass, a scrappy group of appealing underdogs is pursuing the kind of impossible dream ingrained in the city’s distant past.

Pitcher James Dalton stood under hot sun on the BC High field yesterday and casually declared that, before he joined the Beacons, “I hadn’t picked up a baseball for five years.’’

After high school, Dalton went to a Division 2 South Carolina baseball powerhouse, from which he promptly flunked out. He ended up in Boston and worked at the popular Eastern Standard restaurant in Kenmore Square, where the head chef, Jeremy Sewall, persuaded him to go back to college. “I told him he owed it to himself to take another shot,’’ Sewall said yesterday. So Dalton enrolled at UMass Boston, stopped in to see Eygabroat, and informed him that he was a left-handed pitcher.

Then there’s starting left fielder Drew Tambling of Sterling. When his teammates call him a rock star, it’s because he was, well, a rock star — or at least he played in a band in Los Angeles before it broke up. His mother pleaded with him to go back to school, so he enrolled at UMass Boston because it was cheap. Once there, he needed to make friends, so he tried out for baseball. First he eked in as a pinch runner. Then he was cut. Then he ended up starting in left field and making the all-New England team this year.

The list goes on. Fontaine, another walk-on, got just one hit in the fall scrimmage season his freshman year — and that was actually a foul ball that his coach called fair to boost his confidence.

He just about took up residence in the school’s only batting cage. “I’d leave my office at 7:30 or 8 every night and he’d be in there, hitting balls,’’ said Eygabroat. The result: 11 home runs this season, a winning home run in a decisive playoff game, and a spot on the all-New England team.

Jose Roman Santos was a star at Madison Park High School in Boston and enrolled at Wheaton College in Norton, which he quickly got himself thrown out of because of run-ins with the coach. “I didn’t think I’d play anywhere again,’’ he said. This year, he’s the starting right fielder for the Beacons, hitting over .300.

Santos, like virtually every other player at the team, credits Eygabroat for their success. He relates to the players, they said, and knows how to guide them to the kinds of success few have ever achieved.

“It’s like he’s one of the nine on the field,’’ Tambling said.

When the team gathered for a practice yesterday afternoon before a dawn flight today to Wisconsin, the camaraderie was apparent in everything they did — from yelling “Hip, hip, Jose,’’ when Santos’s name was called (something they do whenever he gets a hit), to backing one another up at bases, to needling one another during calisthenics.

John Casey, the respected coach at Tufts University, which has a storied baseball program, has a hard-earned perspective on UMass Boston after losing twice to them in the New England playoffs this month. “They are city guys who have found a place,’’ Casey said yesterday. “From my standpoint, they are a good baseball team. I don’t want that to be shortchanged. They just don’t believe they can lose.’’

It’s Rocky meets the Field of Dreams with a little Bad News Bears for good measure. The motley crew isn’t just marveling over the ride. It’s aiming for the national title.

Brian McGrory is a Globe columnist. His e-mail is mcgrory@globe.com.

Also on The Angle: Cut the Pentagon budget