A friendship on hold 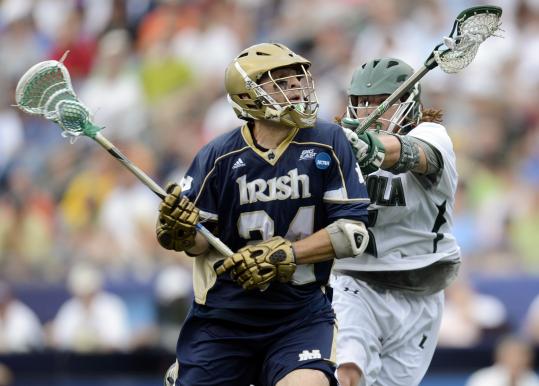 FOXBOROUGH - Josh Hawkins wound up at Loyola of Maryland through one of those friend-of-a-friend situations.

Hawkins said he didn’t know that in order to get the kind of exposure he needed to earn a lacrosse scholarship, he’d have to get out and play in some summer tournaments.

The first one he got word of was the one John Tillman used to run back when he was Harvard’s coach.

He never had met Tillman, but Tillman could spot talent.

Hawkins was competitive. He was athletic. He was a former football player, and he played lacrosse with a running back’s mind-set.

“I came off the field, [Tillman] came up to me, and he said, ‘You need to be playing Division 1 lacrosse,’ ’’ said Hawkins. “He was very, very impressed by my game.’’

Even though he was from Amherst and went to Deerfield Academy, Hawkins couldn’t see himself as a Harvard guy.

But Tillman said he had a close friend who coached at Loyola, Charley Toomey.

“He gave me his number and had him call me and started that process,’’ Hawkins said.

Now, Tillman is coaching at Maryland and he’s guided the Terrapins to the national title game for the second time in his two seasons there. They’ll face Loyola Monday at Gillette Stadium, and for a few short hours, the lines between friends and foes will go haywire.

He’s the reason Hawkins landed at Loyola, and now he’ll have to deal with him. But beyond that, his relationship with Toomey goes back nearly two decades, and his longtime friend is looking to lead the top-seeded Greyhounds to their first national title in school history.

Tillman and Toomey are as close as two coaches can be.

They both coached at the Naval Academy in the mid-1990s. Toomey was in Annapolis as an assistant coach in 1994 and ’95. When he left, Tillman took his place on the coaching staff.

Toomey became an assistant at Loyola in 1999, and he lived about 40 miles from Tillman and his old stomping grounds.

“Charley is one of the finest people I know, and probably the closest guy or friend that I have as a coach in the coaching business,’’ Tillman said. “He’s a good coach. He’s a better friend.’’

Toomey returned the compliments. “He’s been a success everywhere he’s been,’’ Toomey said of Tillman. “He’s as good a recruiter as there is out there.’’

There’s the professional friendship. They run camps together, and hang out in the offseason.

But there’s a personal relationship that makes the pair seem almost like extended family.

Toomey’s a family man with a wife and three daughters. Tillman’s a bachelor. They live a block away from each other now, and Tillman said he’s always over for dinner.

“I can’t tell you the number of times I’ve come home from work and my kids are moving around in the living room and all of a sudden John picks his head up from the couch and he’s like, ‘Hey, welcome home,’ ’’ Toomey said. “It’s like he’s the surrogate dad.’’

They’ve talked throughout the tournament. Not as much as usual. Mostly trading notes on opponents.

“I think both of our noses are in the grindstone right now,’’ Toomey said.

When they were done with their news conferences Sunday, Tillman saw Toomey walking by in the hallway and told him he’d shoot him a text.

“We all have guys that we consider as coaches in your corner and John Tillman is one of those coaches I know is in my corner,’’ Toomey said. “Just not on Monday.’’

Their teams are cut from similar cloth. Loyola’s the jilted top seed that was unranked in the preseason. Maryland’s marched to the championship game despite being unseeded.

When he was at Harvard, Tillman would bring his teams to Loyola to scrimmage. He did the same with his Maryland team this year.

Still, when Toomey saw Tillman Sunday, he picked on him a little about the matchup.

“He’s never wanted to schedule Loyola because he says he doesn’t want to play a friend,’’ Toomey said.

Now they’ve got each other penciled in for the final day of the season.

“This is what he gets,’’ Toomey joked. “If this is our opportunity to play them, I guess it’s a good problem for both of us. We’ll be enemies for two hours and then we’re going to be best friends again.’’