In ACC, BC hasn’t been out of its league

By most measures, switch is a success 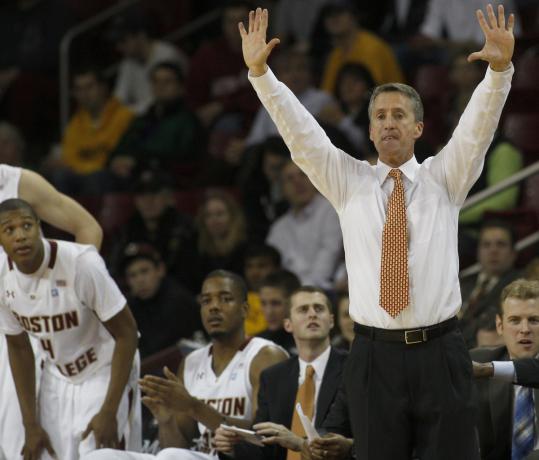 The new deal with ESPN kicked in last summer, and everyone around the Atlantic Coast Conference is smiling. Putting a minimum of $13 million per year on the plus side of the ledger for the next 11 years will make even the most conservative of bean counters feel good about the economy.

At Boston College, which remains the northernmost outpost in the ACC, the feeling was more of contentment and — for the long-term outlook — security. The switch the BC administration made six seasons ago was working, at least financially.

Competitively? That is a matter of interpretation. BC has 31 men’s and women’s varsity sports, by far the most in the ACC. Of that total, the Eagles have produced only one league champion — men’s soccer in 2007 — since joining the ACC in 2005. Of the 23 championships held in the ACC the past athletic season, only BC and Miami failed to win a title.

Success, however, is not based solely on championships. Winning consistently is a more realistic goal.

Take BC’s efforts in the major revenue sports such as men’s and women’s basketball, football, and baseball. Based on wins and losses, the switch from the Big East to the ACC has almost been a push.

O’Brien built a foundation that has withstood the turmoil of having three coaches in four years. Spaziani has continued to build, although he sees some choppy waters ahead.

“When we came into the ACC, Florida State and Miami were in down cycles,’’ said Spaziani. “Now they’re both on the up cycle. It’s not going to be easy.’’

Steve Donahue replaced Skinner last season and is trying to build a program that can sustain success over an extended period of time; the Eagles have missed the NCAA Tournament the last two years.

In women’s basketball, in the last five years in the Big East under Cathy Inglese, the Eagles recorded 106 wins. In the first five in the ACC under Inglese and Sylvia Crawley, they won 95.

In baseball, the Eagles won 161 games in their last five years before joining the ACC. In their first five years in the ACC, they won 142 games.

Former Big East commissioner Mike Tranghese, who had an up-close look at BC’s departure six years ago, says that while he didn’t agree with the way BC departed, he understands the reasons.

According to Tranghese, the BC president, Rev. William Leahy, “had concerns about the league getting away from its base and adding schools, and Gene [DeFilippo, the athletic director] was worried the league was going to implode. And both of those concerns had some merit.’’

By most measures, the Eagles seem to be doing just fine, and with the additional revenue, the move to the ACC appears to make sense.

DeFilippo certainly feels that way, citing the success on the field and in the classroom, as well as financially.

“We’re a hell of a lot more competitive,’’ said DeFilippo.

He acknowledges that the championships have not come, but the overall level of competition has risen.

“Take women’s soccer,’’ he said. “In the last five years, we’ve been to the Round of 16 four times, and this year we went to the Final Four.’’

In the revenue-producing sports, DeFilippo has tried to schedule wisely, aware that, for fan interest, wins can count as much as — if not more than — competitive but losing games against big-time opposition.

Rivalries are scarce What is missing, however, is something more subtle. BC has no natural rivals in the ACC.

Football is a case in point. Had the original ACC plan been approved, BC would have had a natural travel partner in Syracuse. But Syracuse was bumped by Virginia Tech, and BC was left as the only Northern entry.

“We’re trying,’’ said DeFilippo, who has put Syracuse back on the schedule.

That should establish a natural rival at the end of the season. Starting the season with a similar rival is more problematic.

With the University of Massachusetts moving to the FBS level, DeFilippo has offered it two-for-one deals over a six-year period, meaning the Eagles would host UMass four times and play twice on the road (which would be at Gillette Stadium).

“We’ve offered UMass what we’ve given every MAC school — a two-for-one deal. I think it’s fair,’’ he said.

UMass-BC is not Florida State-Miami or even South Carolina-Clemson, but it would be a start, especially since DeFilippo steadfastly refuses to put Connecticut back into the loop.

In basketball, BC will play UMass, Providence, Holy Cross, and Harvard on a regular basis in nonconference competition.

Rivalries are important, especially with a fan base that can be fragile. Other than appearances by Notre Dame, Florida State, or Virginia Tech, Alumni Stadium has little sizzle on most football weekends.

O’Brien, who became the winningest football coach in BC history before leaving for North Carolina State in 2007, deserves most of the credit for building a solid foundation in the program, which was ravaged by a gambling scandal when he took over in 1997.

BC’s nonconference record since 2000 is 48-9. But in those 57 games, it faced only five ranked opponents. In fact, until the Eagles faced (and lost to) No. 13 Nevada in last season’s Kraft Fight Hunger Bowl, they had not played a ranked nonconference opponent since 2004.

“It helped Tom to build,’’ said DeFilippo. “Tom’s a good football coach and he did a fine job here.’’

It should be noted that BC faced Southern Cal, Notre Dame, and Michigan State when none of them was ranked, which is an aberration. But some of the nonconference slates have been particularly nonthreatening, such as in 2006, when the Eagles went 5-0 against Central Michigan, BYU, Maine, Buffalo, and Navy.

Rough spots in football When the move to the ACC was made, DeFilippo had to make tough choices regarding longtime season ticket-holders in football. Prices went up, and seats were moved to accommodate bigger donors.

DeFilippo maintains that this is standard practice for schools in major conferences. But BC, as the administration likes to say, is not like everyone else.

College football is not a hot-button topic in New England. The Eagles need to market what they have and fill the stadium.

Parking, never an abundant commodity for BC games, became even more of a premium. Tailgating, the lifeblood of a college football Saturday afternoon, became an exercise in frustration for many fans who were given tight time limits for their festivities.

“Parking is a legitimate gripe of the fans, but we only have so much space,’’ said DeFilippo. “I don’t know what we can do.’’

Still, the BC-ACC marriage appears solid, despite the Big East’s standing offer for BC to return. ACC commissioner John Swofford said BC has brought much more to the conference than simply a New England address.

“It has been just a tremendous fit,’’ said Swofford. “Everything we hoped it would be when we first began this process seven years ago. It’s a school with tremendous academic and athletic balance that is run extremely well.’’

While BC has not produced championships, said Swofford, it has been more than competitive.

“They were in two football championship games and one in basketball, and that may have surprised some people,’’ said Swofford. “They have made our conference stronger and fit in extremely well.’’

Swofford acknowledges that BC does not have any natural rivals in the ACC, although he points out that, geographically, it is closer to Maryland than Florida State is to Miami.

“I think building up rivalries has to evolve over time, based on great games which are meaningful,’’ he said.

Swofford said there is a mutual sense of satisfaction.

“It has worked out well for both BC and the ACC,’’ he said. “It’s the kind of marriage that everyone thought it would be and hoped it would be.’’

Then and now Given the chance, DeFilippo said, he would not do anything differently; he feels this was the right move for BC.

“What people forget is what I inherited when I got here [in 1997]. Football had three winning teams in 10 years, hockey had six consecutive losing programs. Our basketball coach [Jim O’Brien] had gotten into a brouhaha with the admissions director, and he left and most of our players transferred out.

“We had a class-action complaint [about equity in funding men’s and women’s sports] that took us five years to settle because 72 percent of our athletic aid was going to men and 28 to women. Now we’re 50-50. And we had asked 13 players to leave school because of a gambling scandal. Now that’s what we inherited here in 1997.

“People ask me, ‘What are the two things that have changed in your 14 years here?’

“The expectations are way different.

“No. 2 are the facilities. Every single thing in Conte Forum is brand new. We built a soccer/lacrosse stadium. We built a field hockey stadium. Baseball, we have most of the money raised. As soon as our strategic plan is approved, we’re going to build a baseball and softball facility on the Brighton campus.

“Our fans sometimes forget where we came from. I don’t, because I lived it every day.’’

BC, for all intents and purposes, is living pretty well, just in a different neighborhood.