Making it on her own

Daughter of Belichick succeeding at coaching 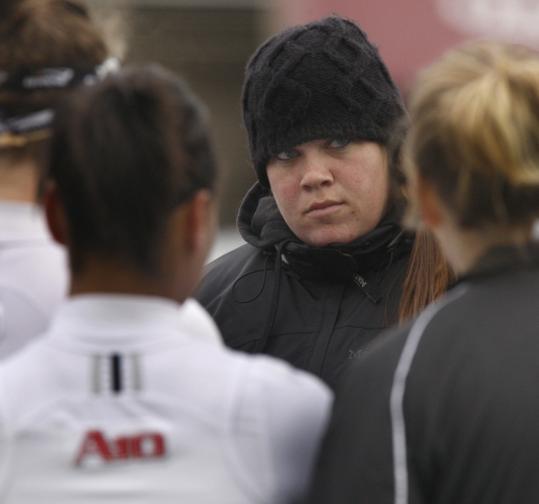 AMHERST - The windchill made the temperature feel like zero the morning of Jan. 30, but the University of Massachusetts Minutewomen persevered, shivering on the football field at McGuirk Stadium while practicing for their upcoming lacrosse season. One very famous parent showed up, too.

“He wasn’t just standing around,’’ said midfielder Haley Smith about Patriots coach Bill Belichick, whose daughter is a first-year assistant coach for the program. “We were just shooting and he’d go and get the balls, y’know. He was like a ball guy.’’

“They giggled at first and said, ‘Oh my God,’ but they’re polite,’’ she said. “They’re cool, they get it. They introduced themselves. Now that they’ve seen him a lot they treat him like any parent.’’

And like any parent, the three-time Super Bowl-winning coach gets more nervous watching his kids than he does coaching the Patriots.

Coach Belichick, who played lacrosse at Wesleyan in the 1970s, is sometimes cryptic, but he minces no words talking about his daughter.

“She always worked really hard,’’ he said. “Her lacrosse career is her lacrosse career, not mine. She paved her own way. I’m really proud of that. I’m just glad she’s happy with what she’s doing. We talk sometimes. We talk about coaching no different than I would with [St. Louis Cardinals manager] Tony La Russa or [University of Florida football coach] Urban Meyer.’’

“He says, ‘You should work on this, because if I was scouting you I’d do this.’ Or, ‘Figure out how to stop that.’ Stuff that we kind of know, too, but it’s nice because there are so many moving parts on the sideline it’s always helpful.’’

Bill Belichick said he is not qualified to grade his daughter as a coach.

“Ask her peers,’’ he said. But he stressed that lacrosse is a totally different game than football.

“In football you go back to the huddle after every play,’’ he said. “In hockey, basketball, lacrosse, and soccer you keep playing, so you don’t get as many set plays.’’

3d-generation coach
Belichick’s daughter joined the UMass coaching staff last August after being head coach at Choate Rosemary Hall, a boarding school in Connecticut, for two years. She had an 8-8 record in 2008 and improved to 9-6 in 2009.

“She was great,’’ said Ned Gallagher, Choate director of athletics. “She brought a lot of energy here.’’

Before that, she was cocaptain of the Wesleyan women’s lacrosse team, where in 2006 she became just the second player in program history to score 50 points in a season.

“Growing up we were definitely a lacrosse family,’’ she said. “I always loved it because I wasn’t playing football, but it was a sport I could throw around with my two brothers and my dad. We have a goal in our backyard and we’d be playing catch.’’

When she became a coach at Choate, she became a third-generation Belichick to lead others onto the field. Her grandfather, Steve, was an assistant football coach at Navy for 33 years. Her dad is going strong after 35 years. With those bloodlines, is she striving to hit the century mark for Team Belichick?

“I’ve never thought about it,’’ she said. “I’m not doing this to prove anything or set any records. I love coaching.’’

Both of her brothers play lacrosse competitively. Stephen is at Rutgers, and her youngest brother, Brian, plays the sport in high school.

But the former Wesleyan attacker also quickly distances herself from her dad. Speaking after an 11-8 loss to the University of New Hampshire, she is brutally honest.

“He’s not my rock as a coach,’’ she said. “He’s not the first person I call. There’s been a lot of other influences in my life. I’m just like a lot of college assistants out there. I come to work. I work hard. I had to do a lot to get here.’’

“I don’t think I’ve earned anything because of who my dad is. This is about my hard work.’’

Bill Belichick goes to most home games, wearing a Patriots parka in the nearly empty stands.

Then she smiled and looked relaxed.

“My dad’s not the biggest women’s lacrosse fan in the world, but we’re here to support each other,’’ she said. “That’s family. Just like all the parents who support their kids here today.’’

She credits Wesleyan head coach Holly Wheeler for being her true mentor.

“I had to make a rule because of her,’’ said Wheeler. “She would spend so much time out there before practice shooting, it was too much. I had to limit it.’’

Wheeler said Bill Belichick once admitted to her that his daughter was a better lacrosse player than he was.

“Her sophomore year he said that he’d come to grips that his daughter would score more goals than he did in college,’’ Wheeler said. “He was OK with that. She wasn’t very athletic but she was one of the best shooters we ever had.’’

But when the history major graduated in 2007, she changed her mind.

Doing it all
During the UNH game, Amanda Belichick was mostly stoic on the sideline like you know who. Flashing cards to substitute midfielders on the fly, she gave her subs a little push to launch them into the field of play. There was one moment when a UNH player ran toward the UMass players on the sideline and Belichick gave her a gentle shove away from her girls.

Midfielder Jackie Lyons, one of the team’s top scorers, agreed.

“She’s a great coach,’’ Lyons said. “She brings a lot of inspiration and great ideas. She’s a really good listener and she has great ideas all the time. We love having her as a coach.’’

Amanda Belichick routinely works 12-hour days. She said her job is part coach and part shrink, and that winning is not the only thing.

“One of the big differences about what I know about the NFL and what I’m doing here at UMass is the girls are much younger,’’ she said. “One of the important things about being a college coach is helping to form these girls into becoming strong women who are competent in everything, not just lacrosse.’’

‘He’s my dad’
Press her about what her dad is really like in the bunkers of Gillette Stadium and you won’t get far.

“He’s my dad,’’ she said. “I’m not going to give out the secrets. I learned from him that things that happened with your team don’t need to be vented to everybody else.’’

She said she’s never been accosted by a Jets fan, or been heckled about Spygate.

Amanda said her dad is one of a kind.

“He’s a simple guy. He’s very much like what people see in him, he’s just more invested in his own relationships than he shows people. He’s very devoted to his friends. He keeps people in his life that help him, that are good friends.

“He’s smart, he’s hard-working, and that is why he’s become so successful, not because he’s doing crazy things off the field. I think people are trying really hard to find those things and they’re not going to because they are not there.’’

She sees a gentler side of him.

“He likes to play charades at Christmas but he isn’t very good,’’ she said.

Her favorite trip with him was to Williamsburg, Va. Belichick would scout William & Mary players in the morning and tour the historic settlement in the afternoon. He even put his head and arms into the stockade.

She scoffs at those who worship her father as a football deity.

She pauses, then chuckles aloud.

“It is what it is,’’ she said, sounding like a chip off the old block. 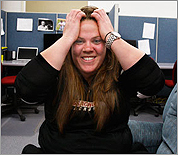 Photos: On the job with Amanda Belichick 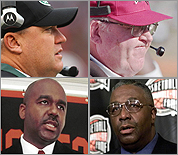 Coaches and their kids