THIS STORY HAS BEEN FORMATTED FOR EASY PRINTING
Globe West Sports

Peterkin ready to wrestle his way back to NCAAs

A strong finish for Penn sets stage for '10 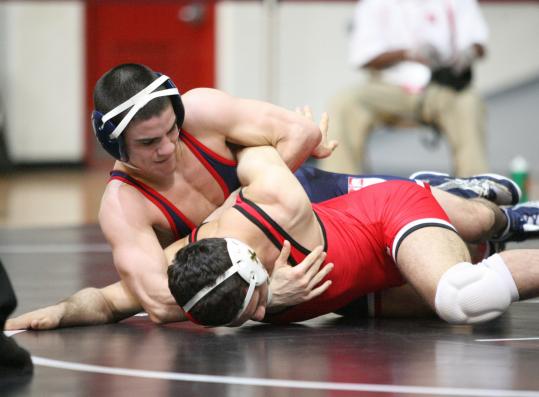 Rollie Peterkin is known in the University of Pennsylvania wrestling program as an explosive competitor, and an athletic, flexible grappler capable of positioning himself for the decisive move at any moment.

His technique can be unorthodox, but he knows exactly where his body is at all times.

Which can be a pain to Peterkin's competitors in the 125-pound class.

"He's very uncanny to wrestle. I'm his size, so I have to be careful when I work out with him," Quakers head coach Rob Eiter said of Peterkin, who earned All-America honors while wrestling for Wellesley High, where he was a three-time Division 2 state champ. "He's got what we call a sixth sense, things you can't teach, to be honest with you. That's what makes him special, separates him from the pack."

Some wrestlers keep things light-hearted before a match; Peterkin calls those moments "tunnel vision" and he remains quiet and focused, with "no distractions out there, really."

When not in competition, he demonstrates a patient, even-keeled demeanor. But it wasn't until he translated that fortitude onto the mat that he truly picked up steam this season for Penn.

It was a tremendous season for someone in a weight class as competitive as his, one that has maintained the great wrestling tradition at Penn. But when he was down in matches in the early part of the season, he had a tendency to try and force something; he'd aim for the big, flashy move that yielded a high number of points but had a low percentage of completion.

"Wrestling season is really long," said Peterkin. "Halfway through the season, it's easy to get discouraged . . . it feels like forever."

In a dual meet in late November, Peterkin tried to force things and fell behind early against Michigan's Mike Watts, resulting in a 10-4 loss.

A day later, in the Keystone Classic, also held at the famed Palestra on Penn's campus in Philadelphia, Peterkin ran the table, defeating American University's Thomas Williams, 10-6, in the finals to take first place in his weight class.

Peterkin picked up steam on the first weekend of December at the Cliff Keen Invitational in Las Vegas.

The top seed, he played the aggressor and put each of his five foes away by 4 points or more. In the finals, he seized a 4-0 lead after one quarter on Minnesota's Zach Sanders and held on for a 10-6 victory.

"I think that was where he really turned the corner," Eiter said. "In that Michigan match, he got behind and tried to force the issue, and to his credit he didn't let it bother him."

Patience was the biggest virtue in his emergence as a junior this season. But at the same time, Peterkin notes: "I could go out there and be aggressive, scoring those points. There's two sides of the coin."

Peterkin has been fortunate to have had plenty of guidance along the way.

After prepping at Blair Academy in New Jersey, he arrived at Penn for his freshman year in the fall of 2006 and immediately had a mentor in two-time national champion Matt Valenti.

"He taught me a lot, it was definitely great having him around," said Peterkin, who racked up a 17-9 mark as a frosh, followed by a 31-5 record last season, when he advanced to the NCAA quarterfinals.

This season, he continued his impressive run, again advancing to the NCAA quarterfinals, held last weekend in St. Louis, before falling 7-3 to Edinboro University senior Paul Donahoe, the eventual national champion. Peterkin also lost to Scotti Sentes of Central Michigan, 4-0, finishing his season with a 23-7 record.

"In that last match, I don't think I played to my full potential," Peterkin said. "I wasn't clicking out there. It's too bad, because I had the potential to do a lot better."

There will be no shortage of motivation for Peterkin this off-season. The top eight finishers in each weight class at the NCAA championships earn All-America status; Peterkin just missed the cutoff for the second straight season.

During the season, Peterkin had defeated four of this year's All-Americans from the 125-pound weight class, most notably Cornell's Troy Nickerson, who lost to Donahoe in the NCAA finals.

"I start training now for next year," he said Sunday night. "I'm definitely going to let this fuel me. I'm really disappointed, but the only thing I can let it do is really drive me, and not settle for anything less next year."

There's a lot left in the tank, for certain. But he's going to approach things with the same aggressive patience that got him here in the first place.

"I know all the sacrifice it takes. It's hard work," Peterkin said. "You put in time, and hopefully you do better next year."