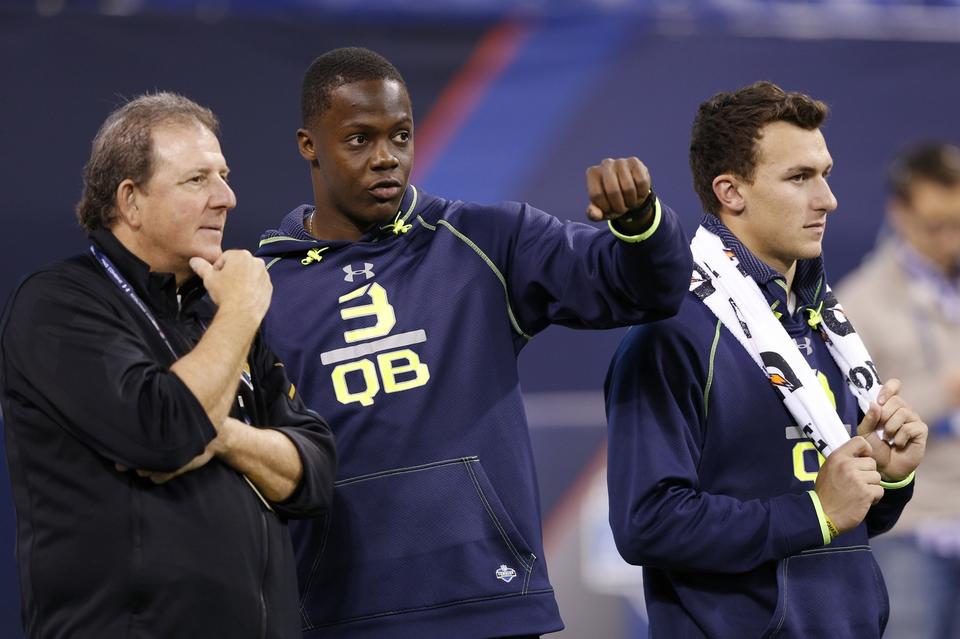 (Photo: Joe Robbins/Getty Images)
Each NFL team is allowed to host 30 prospects at their facility each year, in advance of the NFL draft.

With news that the New England Patriots will be hosting Texas A&M quarterback Johnny Manziel and Louisville quarterback Teddy Bridgewater for visits at Gillette Stadium, one may begin to wonder why the Patriots would waste two of their private visits on two of the top quarterback prospects. Both players could be off the board well before the Patriots pick, and the Patriots don't have a pressing need at quarterback with Tom Brady still in the fold.

Per league rules, the Patriots cannot work out the players at their facility, so the visits are mainly for off-field purposes. Even without getting to see them run and throw, there are other underlying benefits to having the two players in for a visit.

It's not out of the question that one of these players could freefall on draft day  just ask Jets quarterback Geno Smith, who was considered by many to be the best quarterback in the 2013 class, only to fall all the way out of the first round. If that happens to either Bridgewater or Manziel, the Patriots could raise the asking price if a team wants to take whichever one is available.

A closer look at competition

As Christopher Price of WEEI.com notes, the Patriots play five games against teams with a top-10 pick: two games against the Buffalo Bills, and one game each against the Detroit Lions, Minnesota Vikings, and Oakland Raiders. Specifically, the Vikings and Raiders are considered buyers in the quarterback market.

A little inside knowledge could help in the immediate future, but even in the long-term. It's a quarterback-driven league, so why not take an opportunity to get a closer look at two players who could be the face of their respective franchises for the next 10 to 15 years?

It's also possible that the Patriots are trying to get more information on other players by bringing in teammates. The Patriots have been in contact with Texas A&M wide receiver Mike Evans, a projected first-round pick who has been Manziel's favorite target in college. The Patriots could just be looking to collect as much information on the 6-foot-5-inch, 225-pound receiver as possible, in the event he is available when the Patriots pick.

On that note, the Patriots could be trying to get some information from Bridgewater on his favorite target at Louisville, wide receiver Damian Copeland. It would make sense, since Copeland aced the three-cone drill with a 6.53-second finish that was the best among all wide receivers in Indianapolis. The three-cone drill has been a recurring theme among Patriots draft picks, and Bill Belichick could be looking to get a better idea of what Copeland brings to the table.

This wouldn't be the first time the Patriots have used this tactic; Tim Tebow visited the Patriots in 2010, and the Denver Broncos traded up to move past the Patriots to grab him at the end of the first round.

Maybe the interest is entirely legitimate. You just never know when a player might slip, and the Patriots may want to have as much intel as possible in order to make the best decision in the event that one or both players are available.