In this final installment of the 100 Best Sports Photographs of 2010, the months of October, November, and December are featured. The Commonwealth Games in India and the Asian Games in China were the major events on the calendar, but smaller competitions and solitary athletes made for brilliant photographs as well. ( 25 photos total) 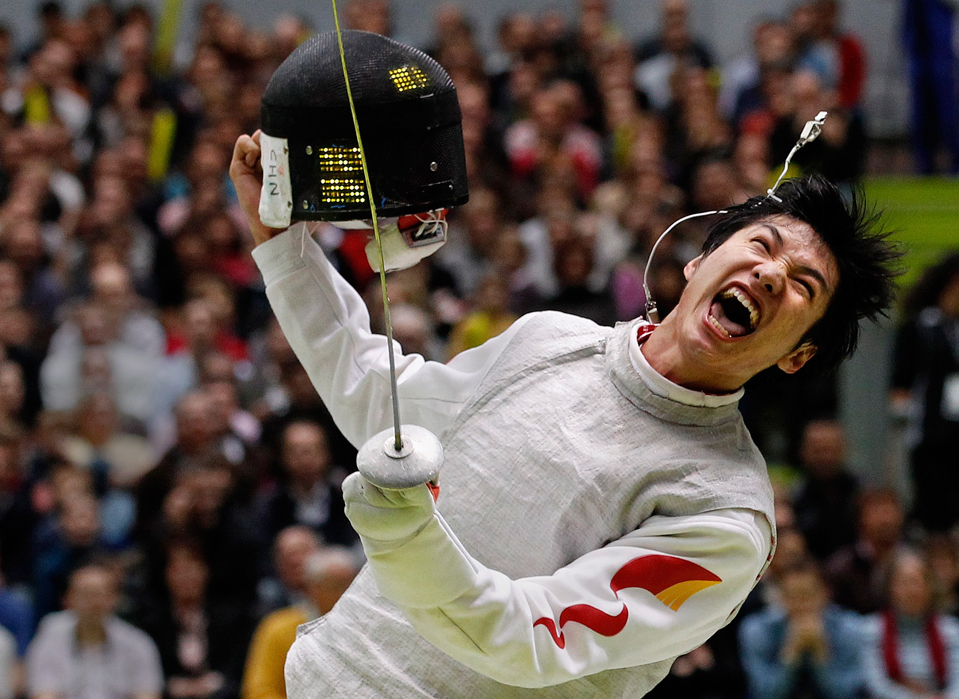 Lei Sheng of China celebrates defeating Yuki Ota of Japan in the semifinals of the foil competition at the World Fencing Championships at the Grand Palais in Paris November 7. (REUTERS/Eric Gaillard) 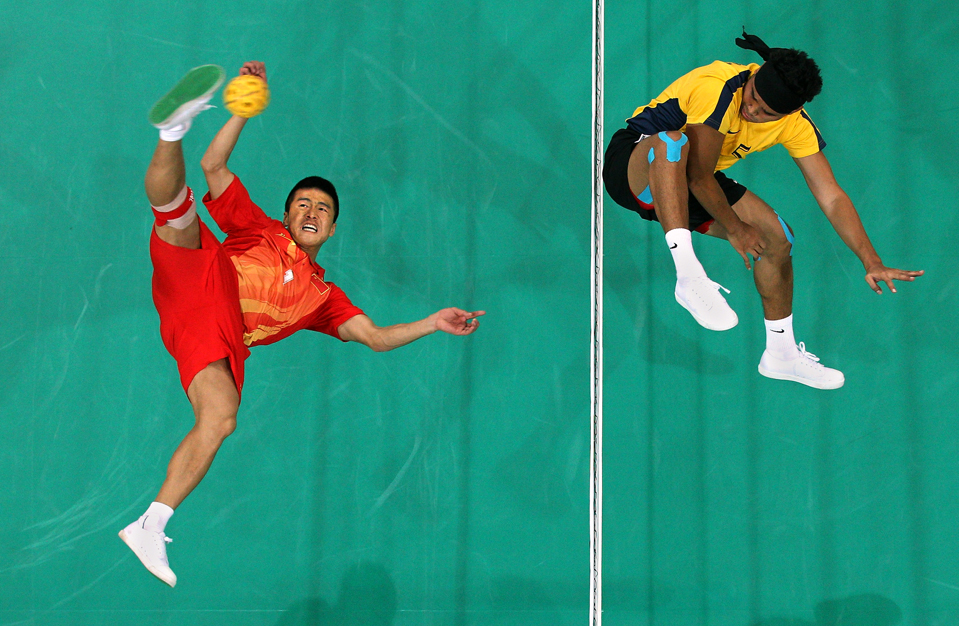 2
Muhammad Sya Husin of Malaysia attempts to block the shot from Wang Jian of China in their Sepak takraw team preliminary match at the 16th Asian Games in Guangzhou in the Haizhu Sports Centre November 16. (Mark Dadswell/Getty Images) # 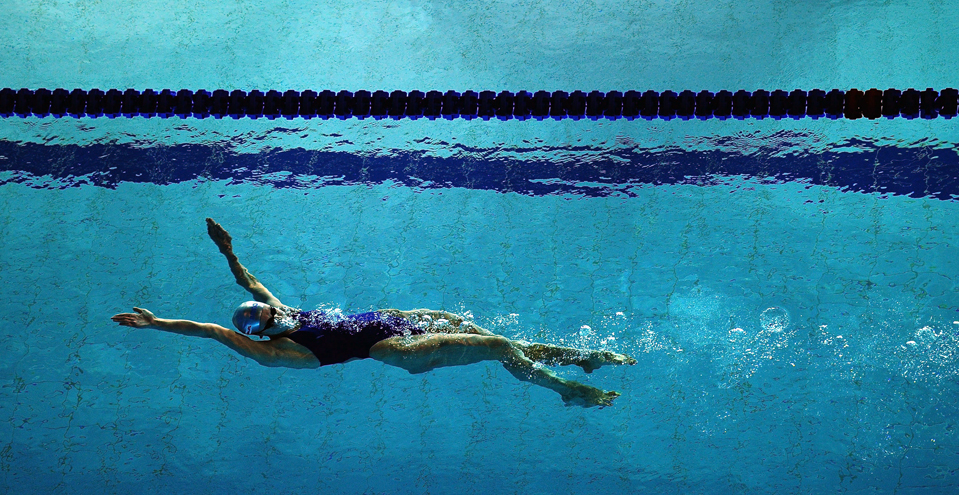 3
A swimmer warms up prior to the evening finals session for the 25m event during the 10th FINA World Swimming Championships at the Hamdan bin Mohammed bin Rashid Sports Complex December 19 in Dubai. (Shaun Botterill/Getty Images) # 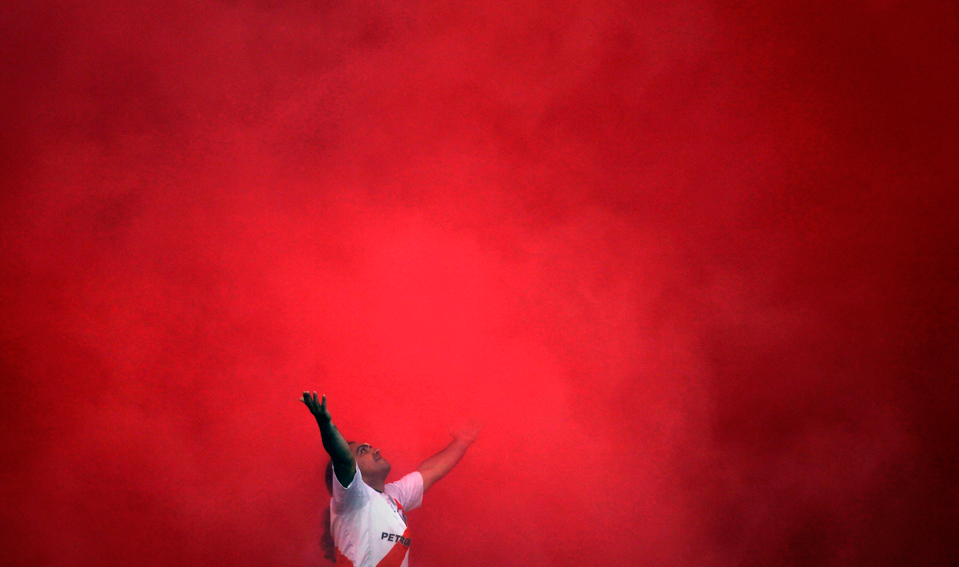 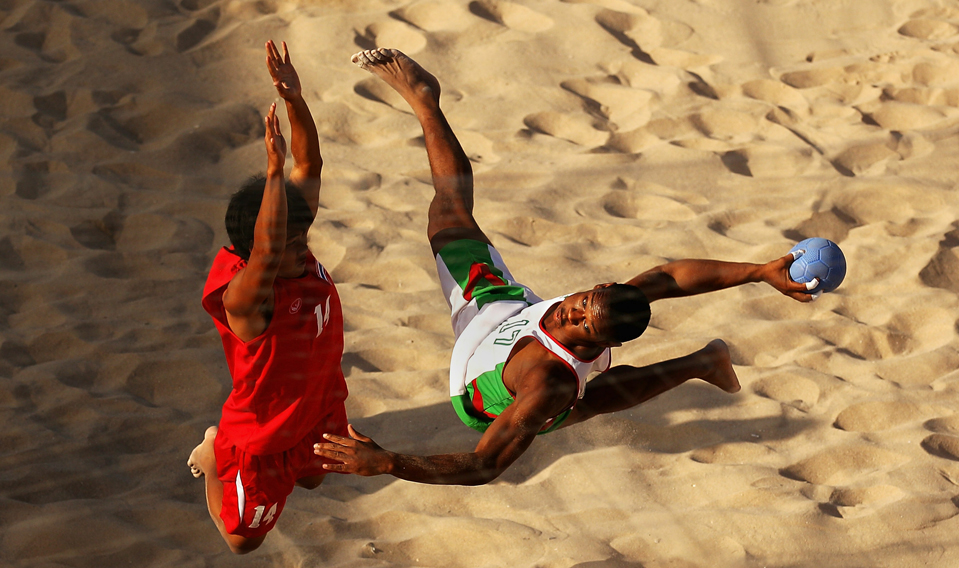 5
Hisham Alwahaibi of Oman shoots past Wanchalerm Natehanon of Thailand during their handball match at the beach handball event at Al-Musannah Sports City at the 2nd Asian Beach Games December 16 in Muscat, Oman. (Ryan Pierse/Getty Images) # 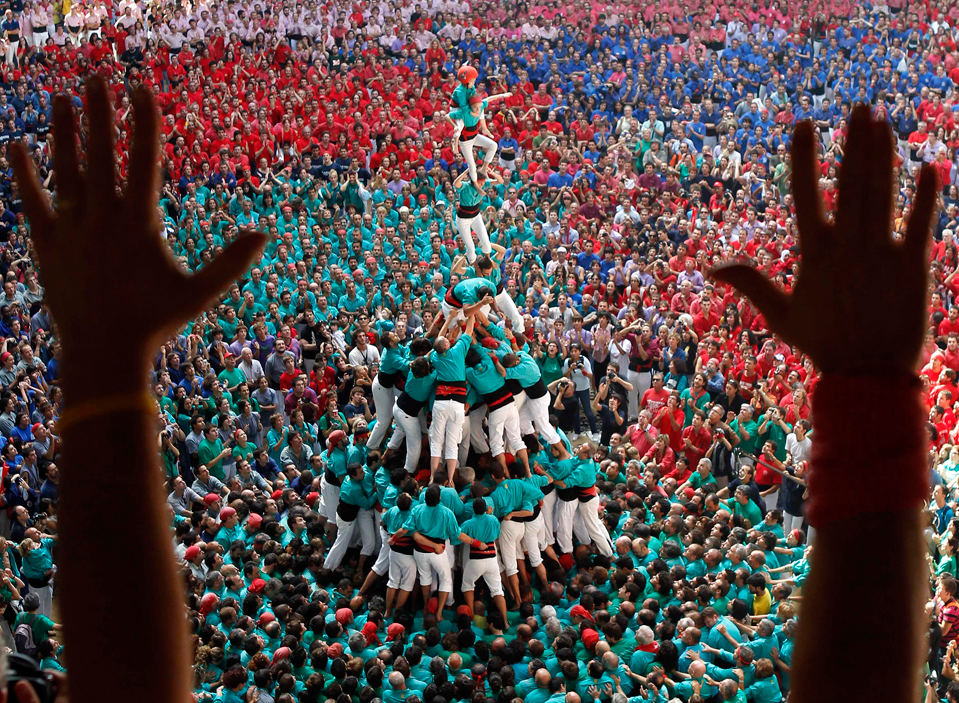 6
The group 'Castellers de Vilafranca' falls after forming a human tower called 'Castell' during a biannual competition in Tarragona, Spain October 3. The formation of human towers is a tradition in the area of Catalonia and between 100 and 200 people are needed to complete a big tower. (REUTERS/Albert Gea) # 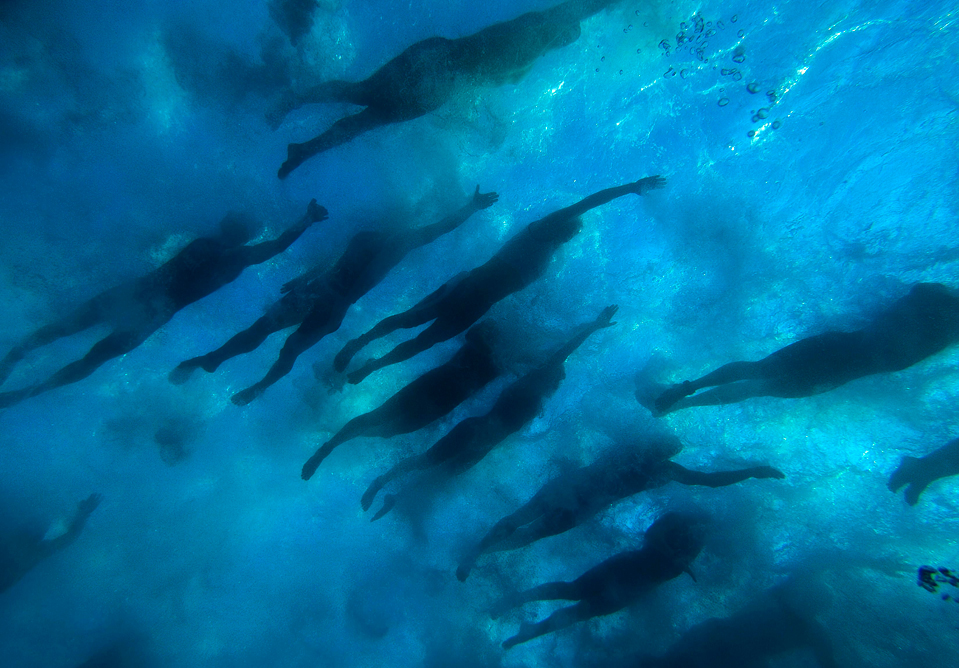 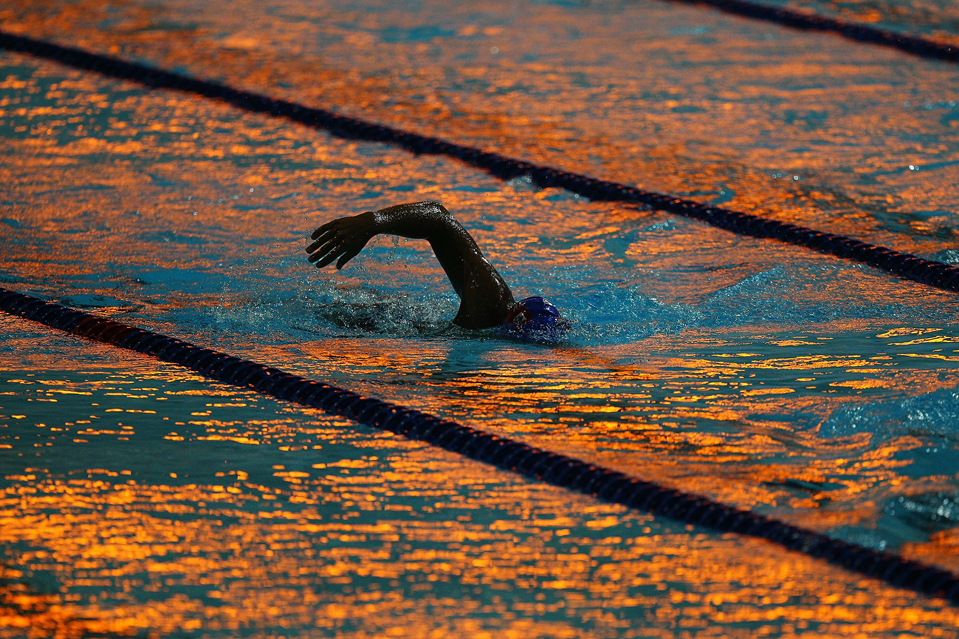 9
A competitor swims during a training session at the Dr. S.P. Mukherjee Aquatics Complex ahead of the Commonwealth Games October 1 in Delhi. (Adam Pretty/Getty Images) # 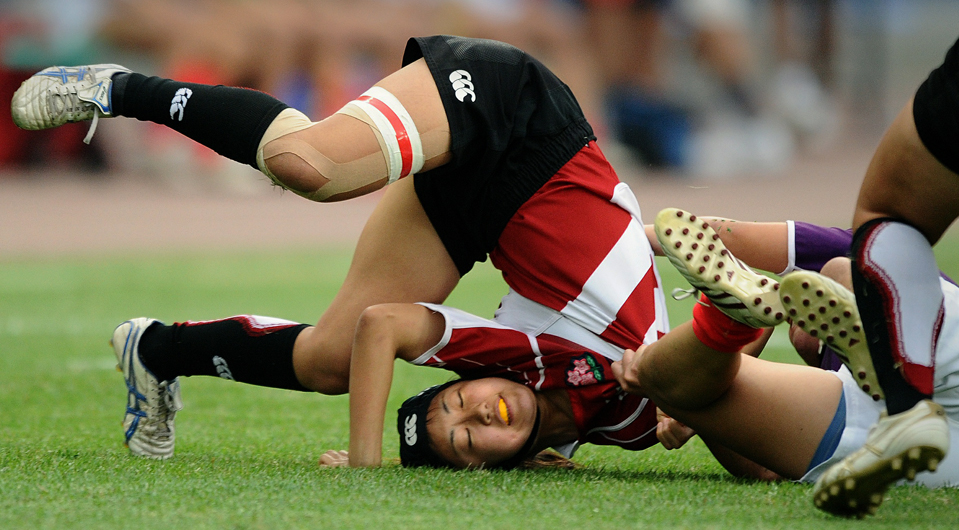 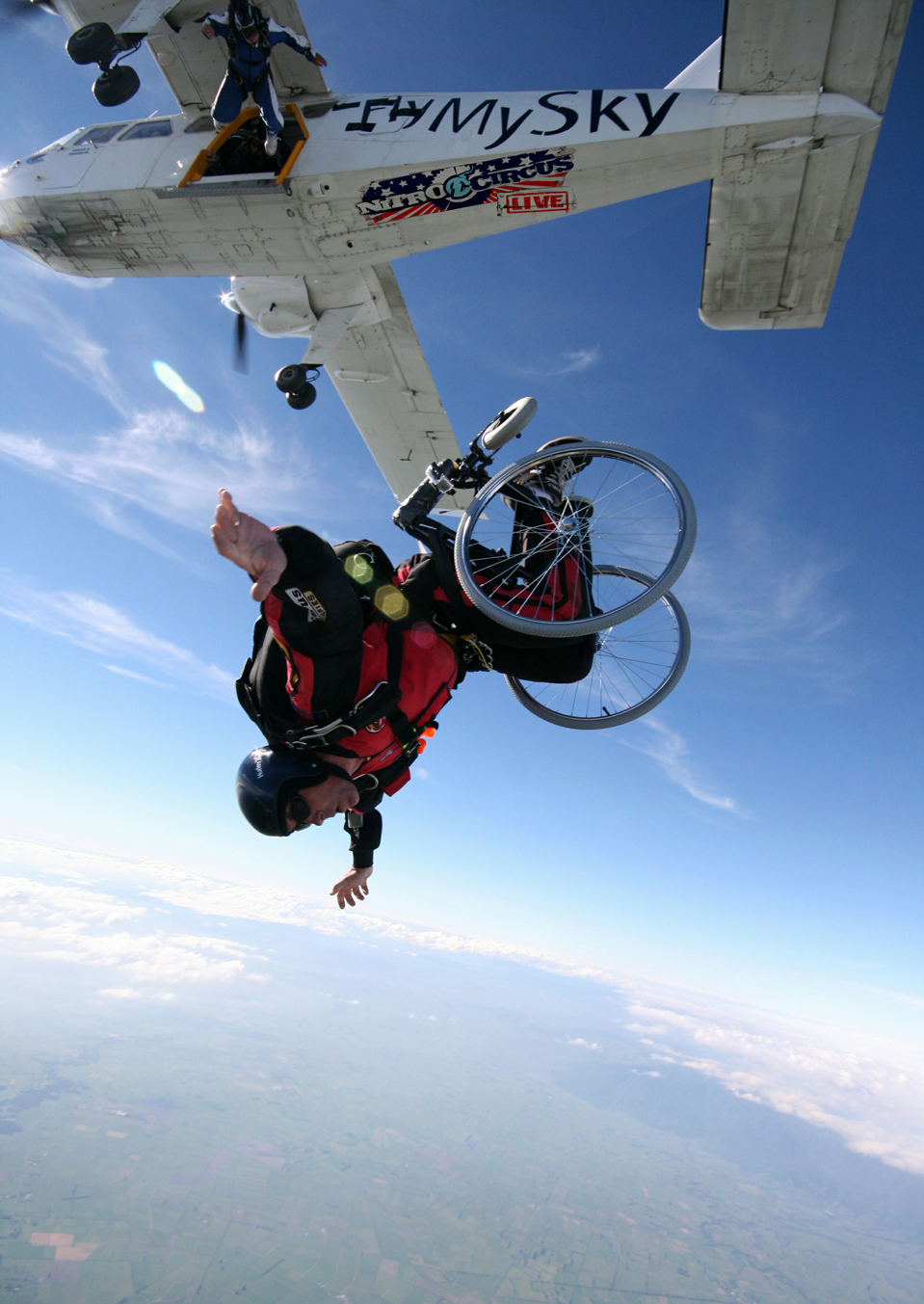 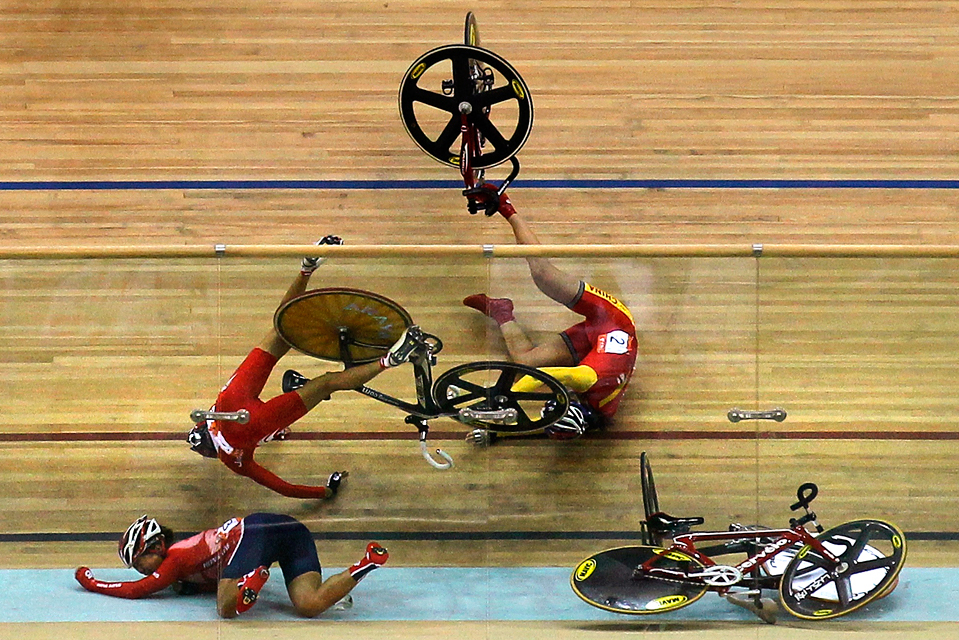 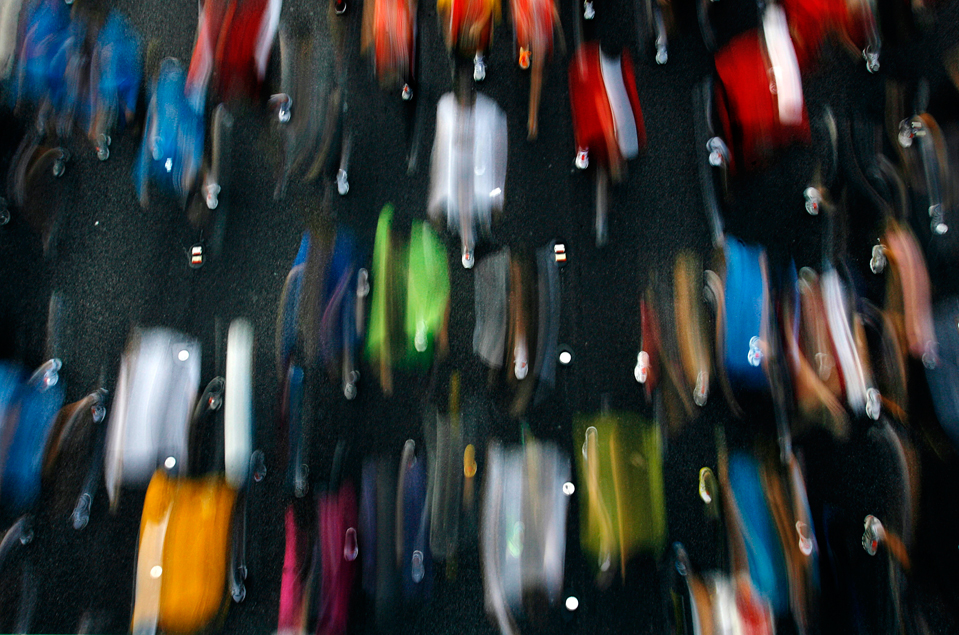 13
With endless all-you-can-eat buffets and the loosest slots in town motivating them, more than 28,000 runners participated in the Las Vegas marathon and half-marathon December 5. (AP Photo/Isaac Brekken) #

14
Dog breeders try to encourage their Saluki dogs as they drive alongside them during the first Gulf Challenge of the Arabian Saluki Championship in the Qatari desert near Khor October 10. The dogs chase a gazelle along a 2km route. (REUTERS/Stephanic McGehee) # 15
A rider on his horse participates in the International Wadi Rum Endurance Race in the Jordanian desert of Wadi Rum in Jordan November 14. (AP Photo/Nader Daoud) # 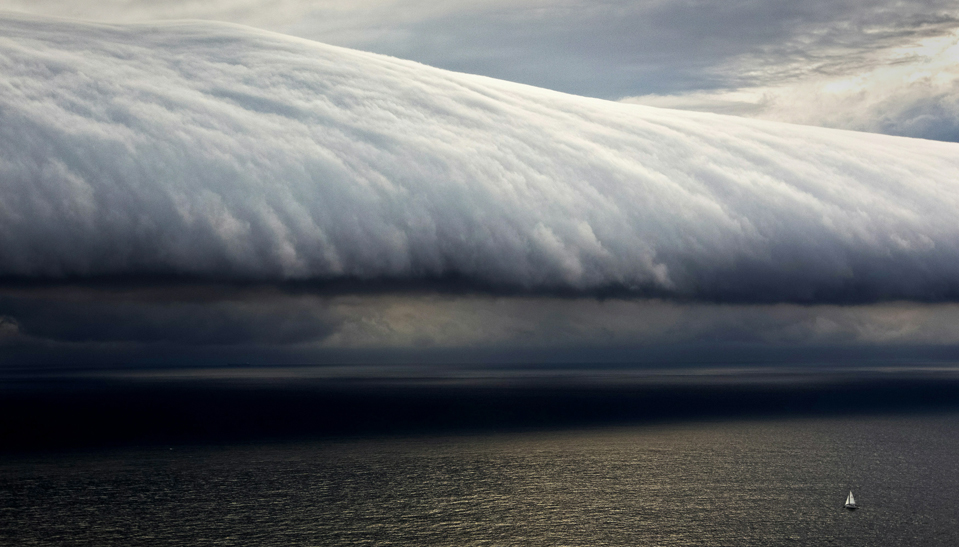 16
A competitor heads toward a storm front near the Bass Strait during the 66th Sydney Hobart Yacht Race December 27. (CARLO BORLENGHI/AFP/Getty Images) # 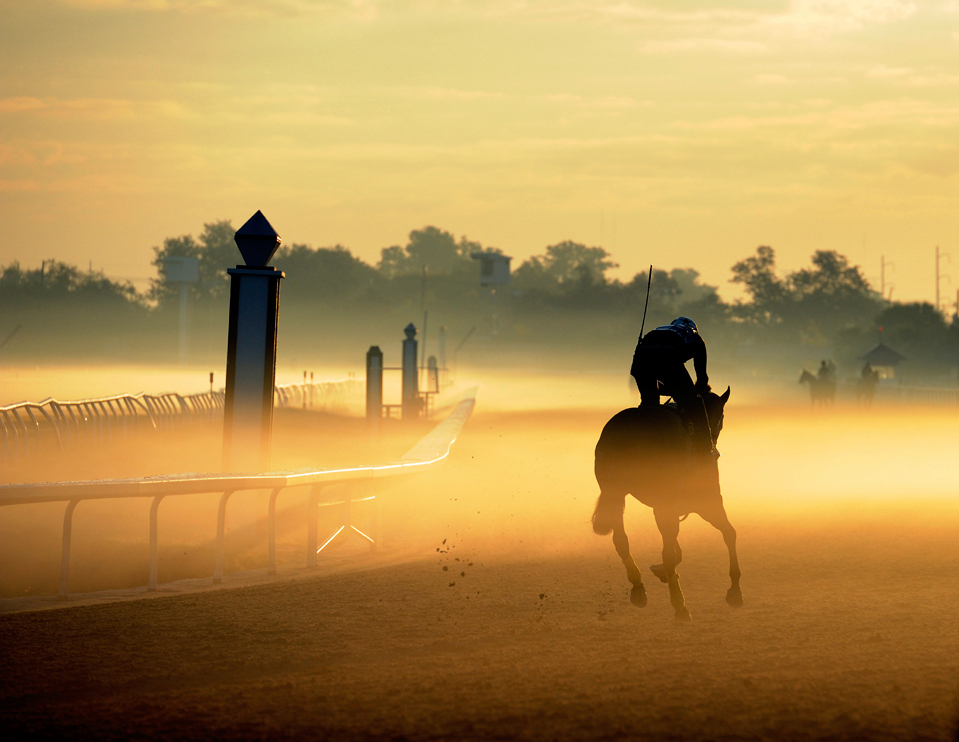 17
A horse and rider make their way through the early morning fog at the Fair Grounds Race Course in New Orleans October 11. (AP Photo/Alexander Barkoff) # 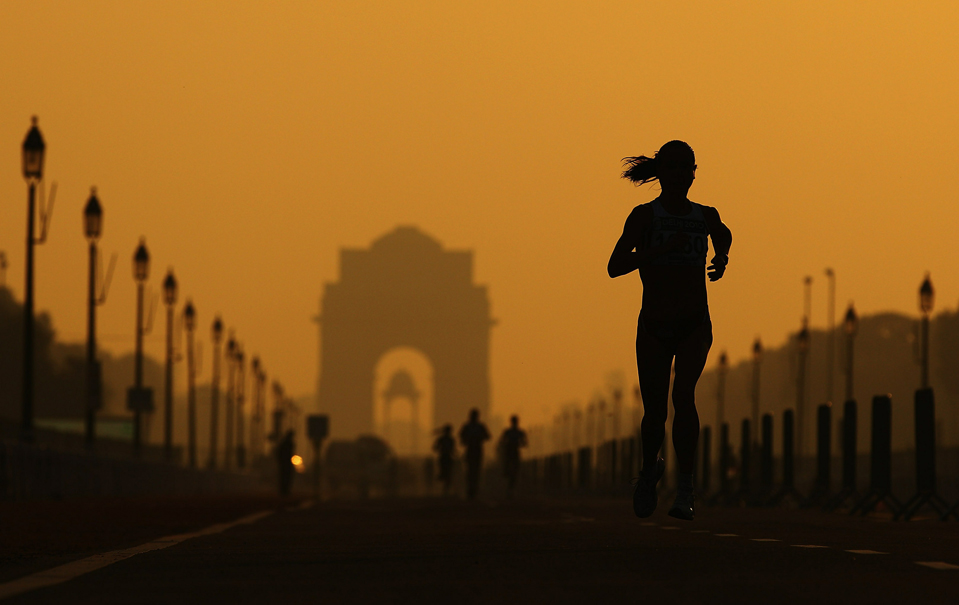 18
An athlete competes in the marathon at Vijay Chowk during the Commonwealth Games October 14 in Delhi. (Mark Dadswell/Getty Images) # 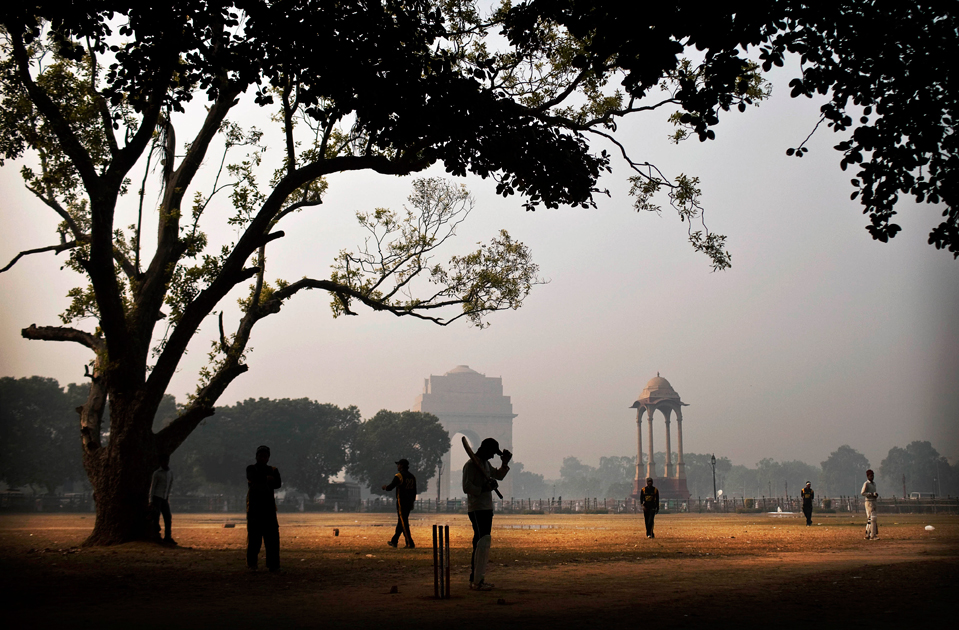 19
An Indian youth waits to bat during a pick-up cricket match on a foggy day near the India Gate monument in New Delhi December 26. (AP Photo/Kevin Frayer) # 20
Surfers walk along a snow-covered path as they leave the Baltic Sea in Timmendorf, Germany December 2. (REUTERS/Christian Charisius) # 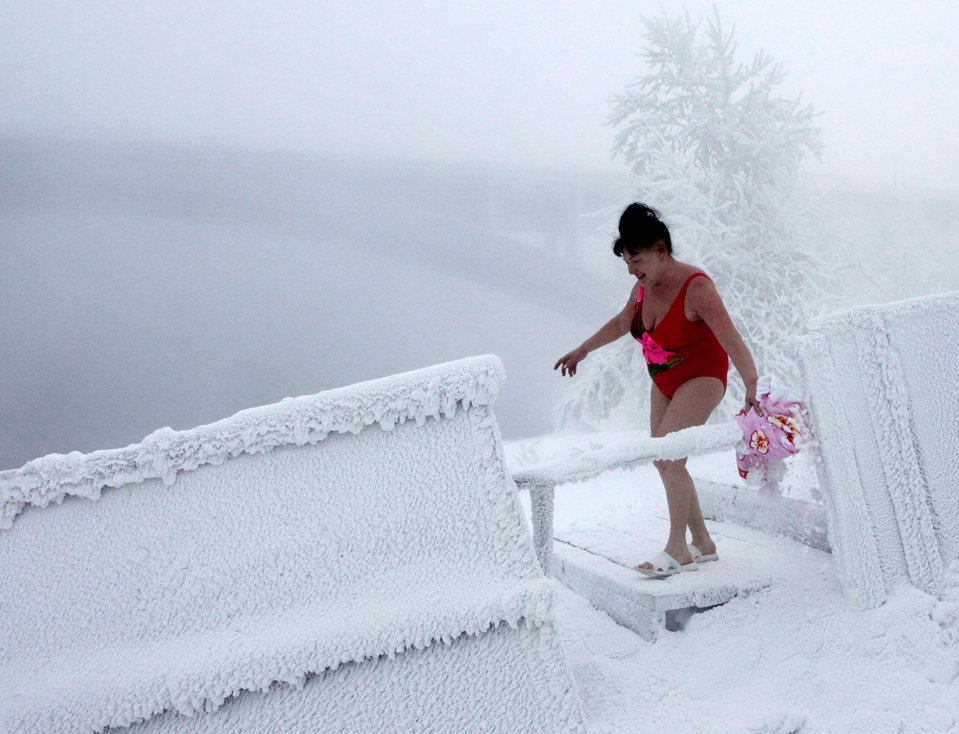 21
A member of a local winter swimmers' club walks to bathe in the Yenisei River amid air temperatures measuring about -33 degree Fahrenheit in the Siberian city of Krasnoyarsk December 12. (REUTERS/Ilya Naymushin) # 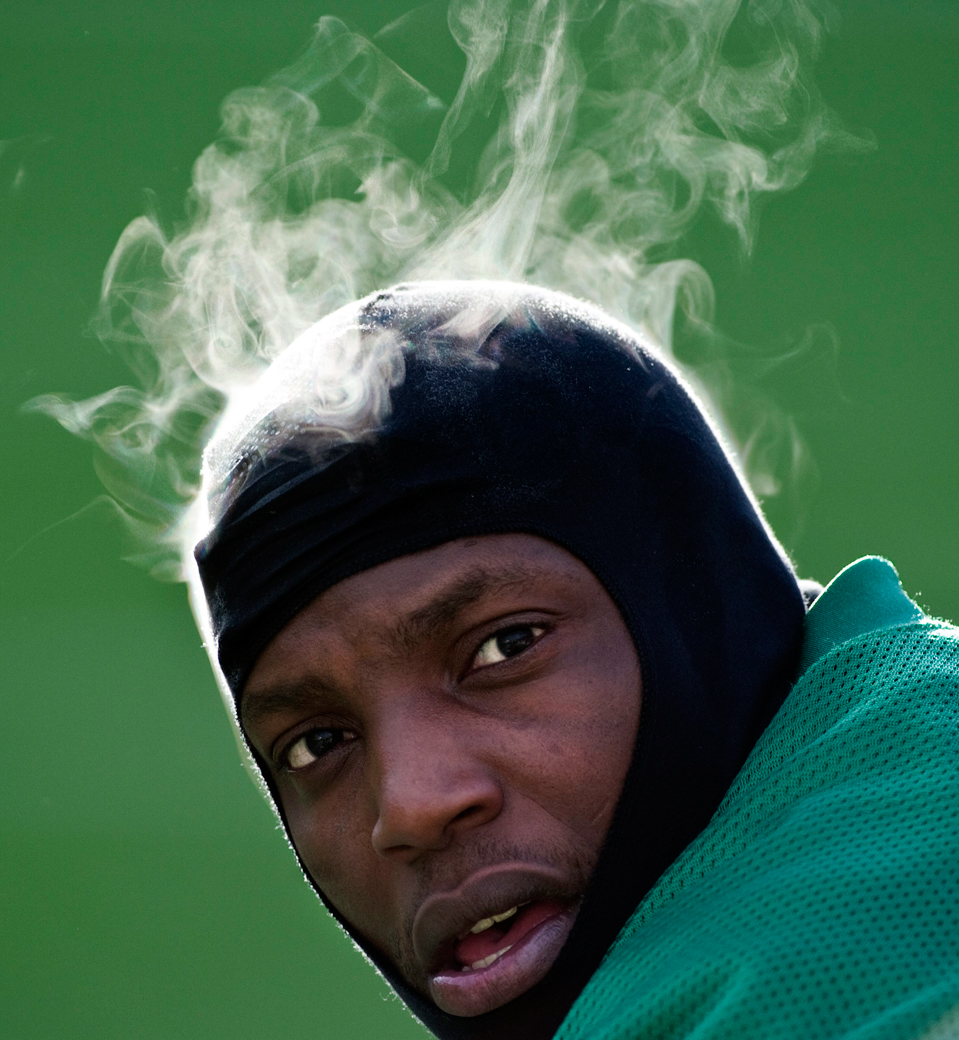 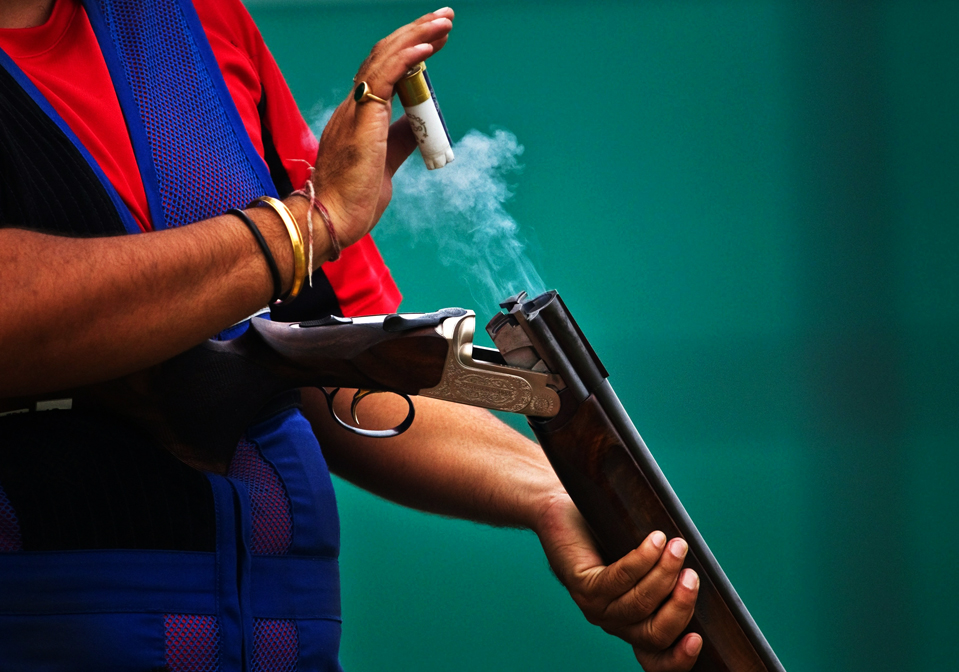 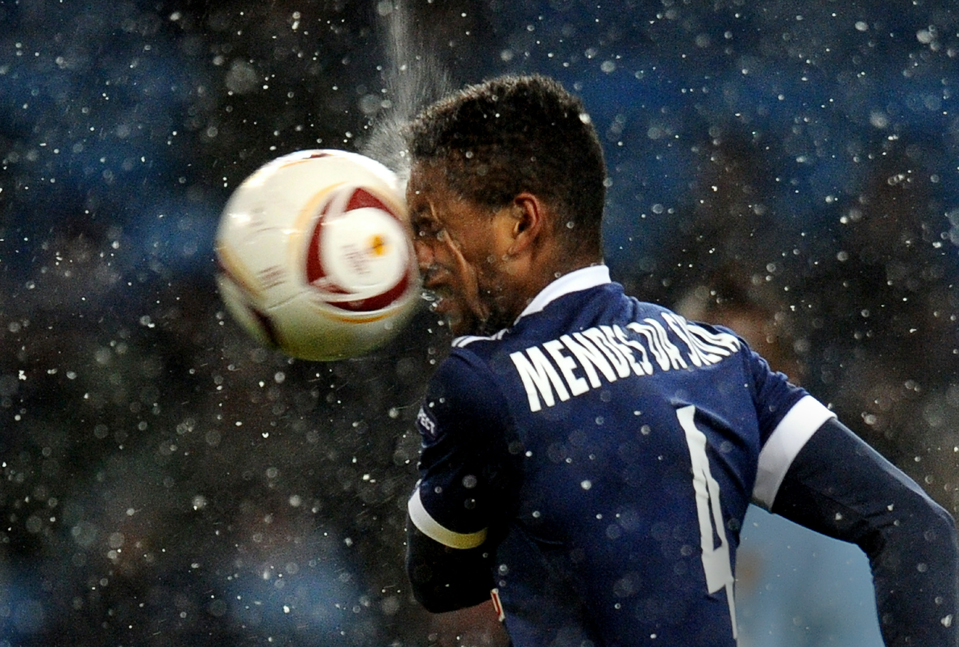 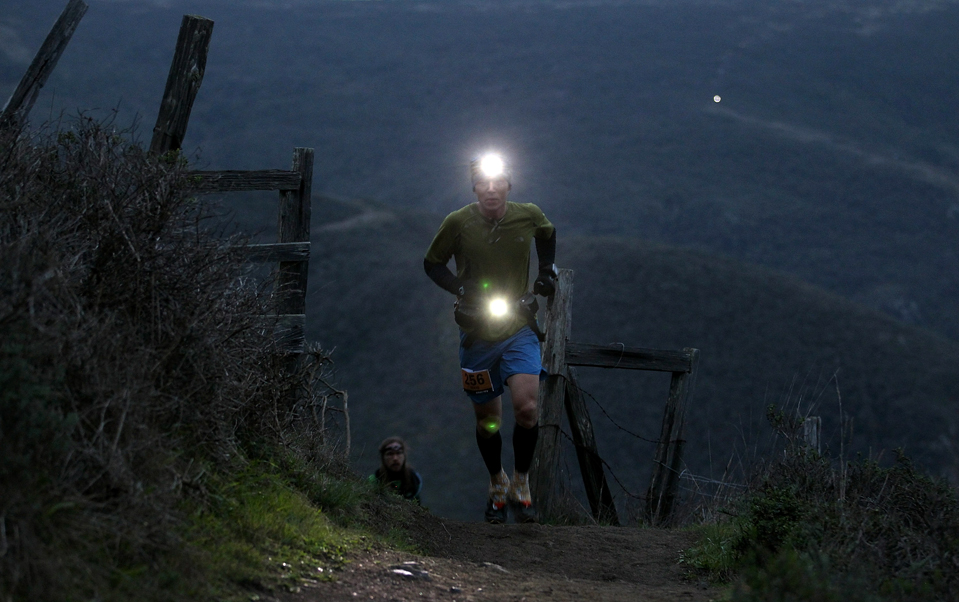 Is that one of the TNF ultras in the last photo? Thanks for highlighting our weirdly frowned upon sport.

Posted by FRED February 25, 11 02:06 AM
recent entries
Advertisement
(only click once)