Part three of the 100 Best Sports Photographs of 2010 showcases the months of July, August, and September. Singapore hosted the Youth Olympic Games in August, a competition that drew teams from over 200 countries. And the annual Tour de France drew 180 cyclists and millions of spectators to the largest stadium in the world - the roads of France. But smaller events caught the eyes of photographers all over the world, as did individuals enjoying their sports away from the glare of competition. Next week I'll conclude the 100 Best with an entry featuring the months of October, November, and December. Check the links below to see parts 1 and 2, as well as the 100 Best from 2009.( 25 photos total) 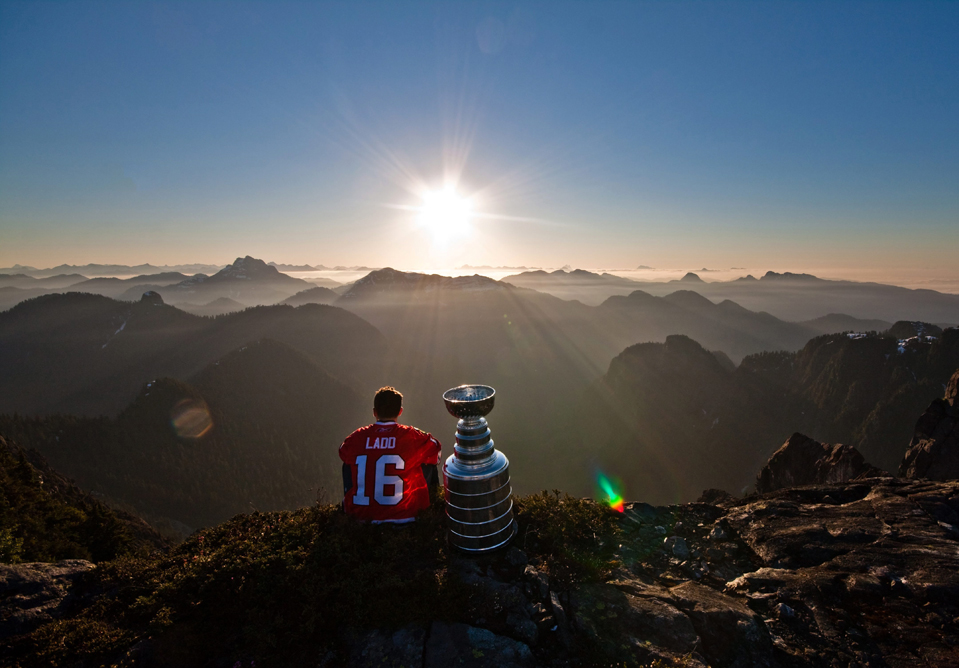 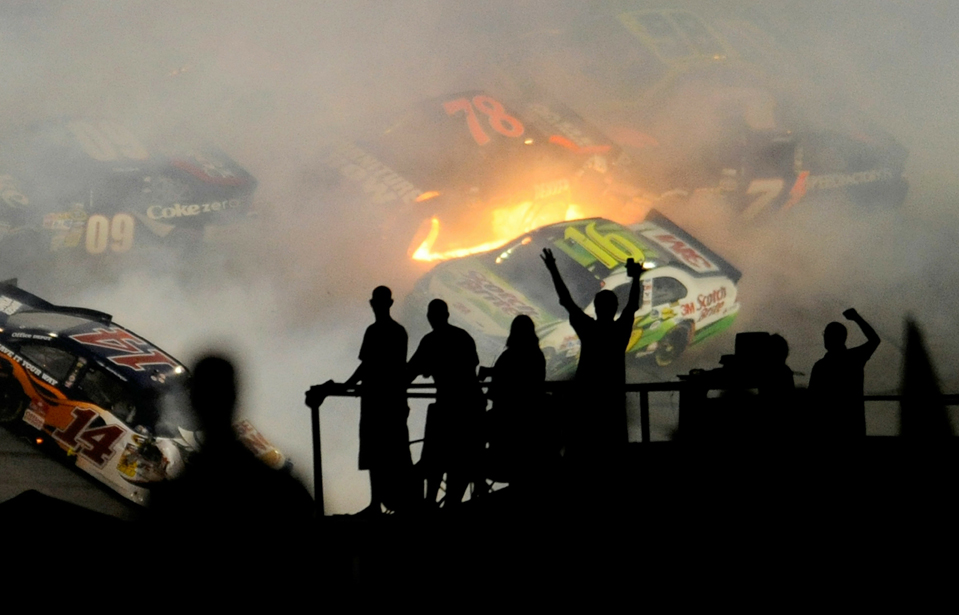 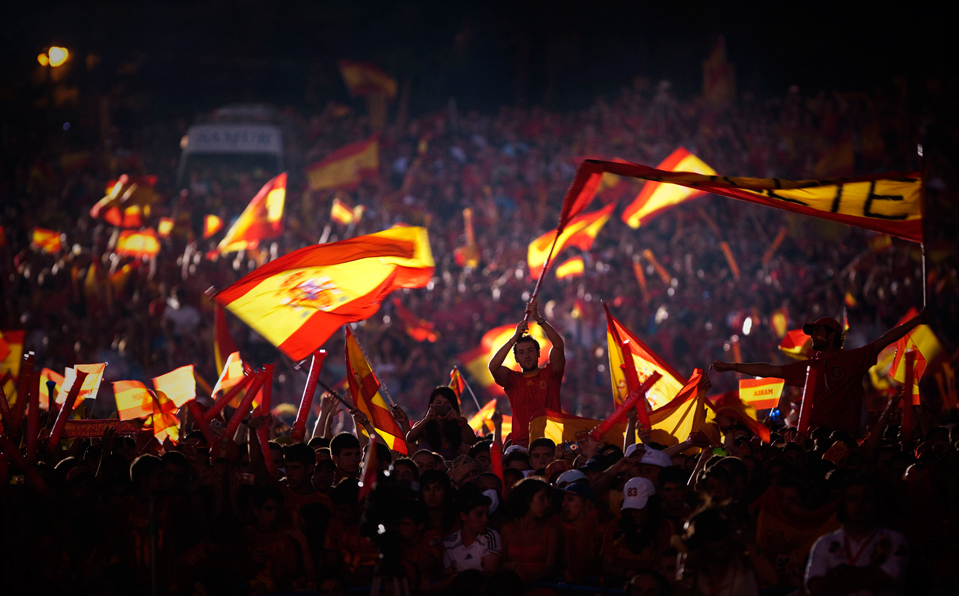 4
Spanish fans wave their flags as they wait for the arrival of the Spanish team in Madrid July 12 after its victory in the World Cup. (AP Photo/Emilio Morenatti) # 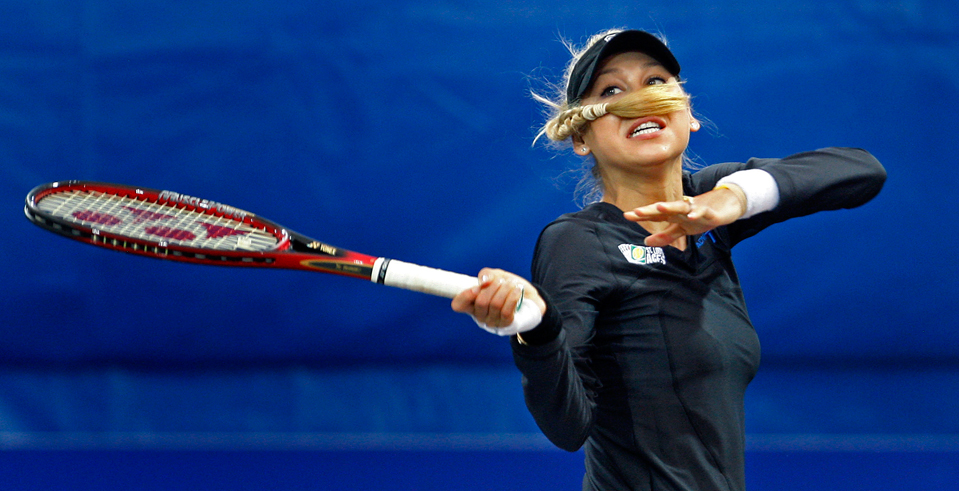 5
A ponytail mustache doesn't stop Anna Kournikova of the St. Louis Aces from returning a shot during the women's doubles match against the Boston Lobsters in World Team Tennis action at the Ferncroft Country Club in Middleton, Mass. July 19. (Jim Davis/Globe Staff) # 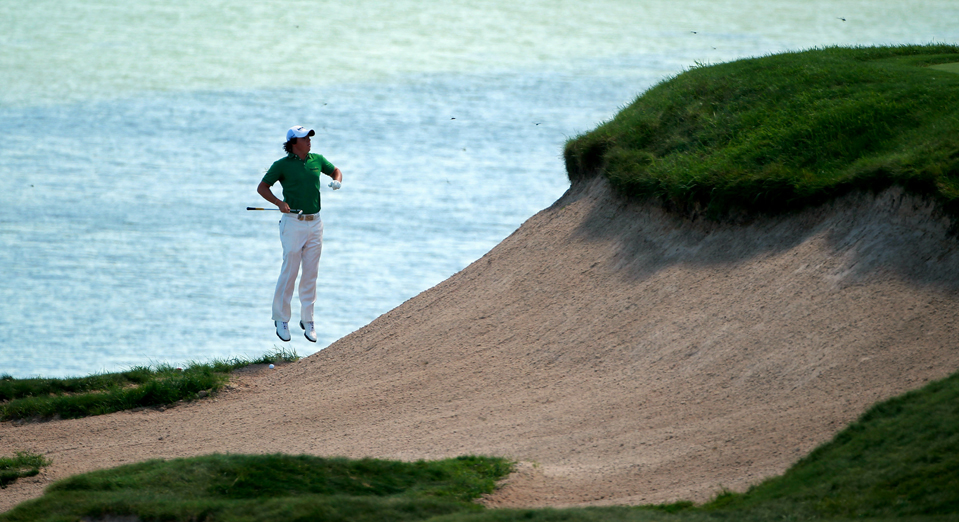 6
Rory McIlroy leaps in the air to watch a bunker shot on the third hole during the final round of the 92nd PGA Championship on the Straits Course at Whistling Straits August 15 in Kohler, Wis. (Andrew Redington/Getty Images) # 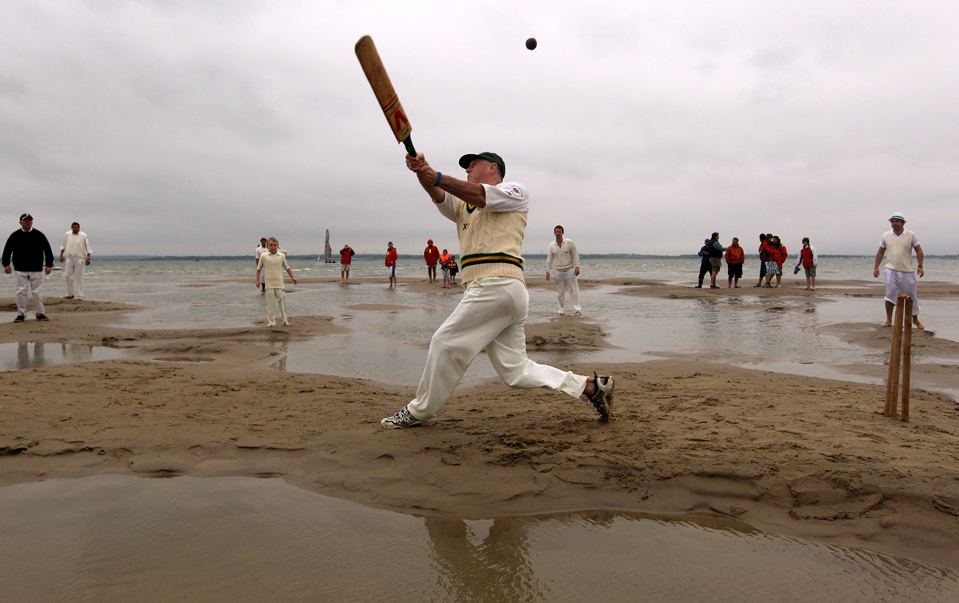 7
Teams play a cricket match in the middle of The Solent on the Brambles sandbank, which appears for 30 minutes at low tide, August 14 in Southampton, England. The annual cricket match takes place between the Royal Southern Yacht Club and Cowes's Island Sailing Club. Boats of players and spectators travel from the Isle of White and Southampton to wait around Bramble Bank at low tide, where play continues until the tide returns. (Oli Scarff/Getty Images) # 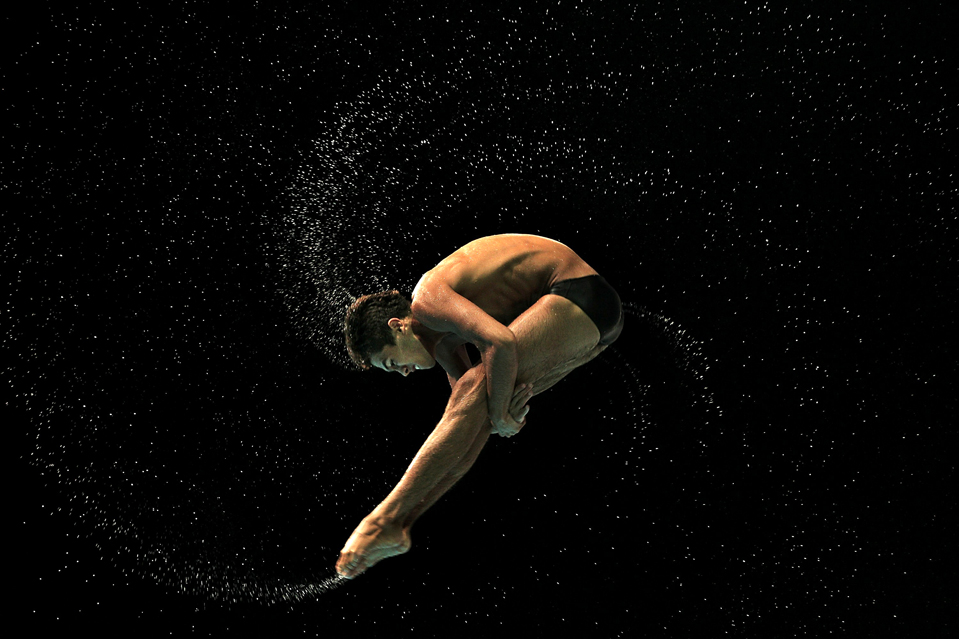 8
Angel Miguel Reyes of Colombia competes in the final of the 3m springboard diving competition at the Youth Olympics at Toa Patoh Swimming Complex August 22 in Singapore. (Adam Pretty/Getty Images) # 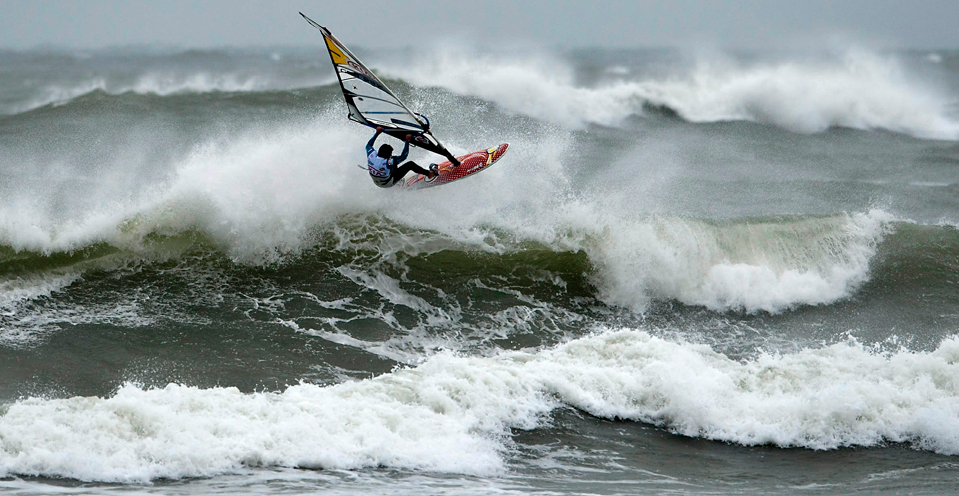 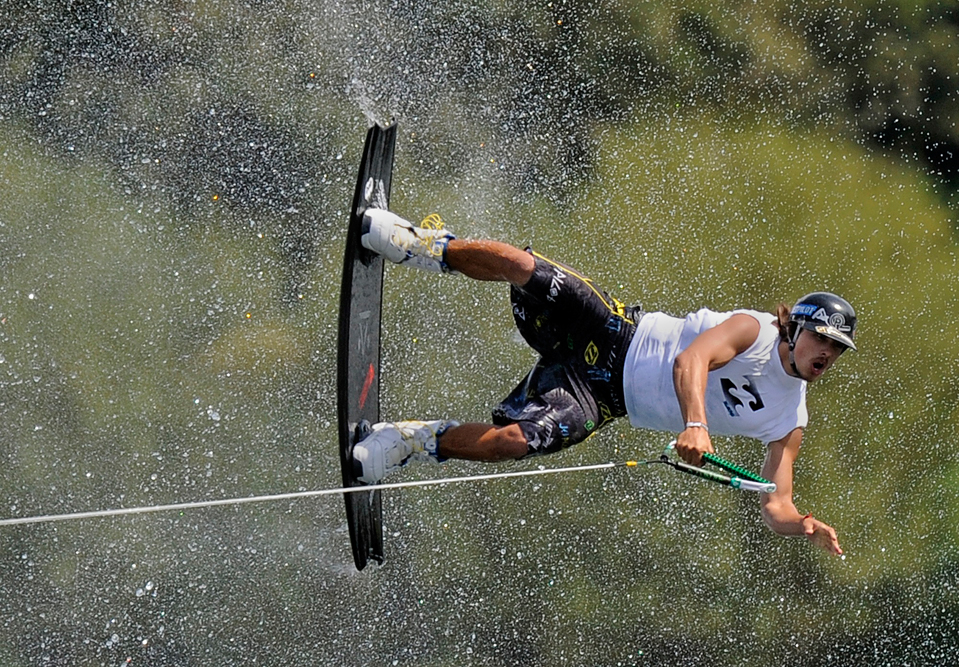 10
Tobias Dammith performs on his board during the German Wakeboarding Championships on Fuehlinger Lake in Cologne August 14. (AP Photo/Martin Meissner) # 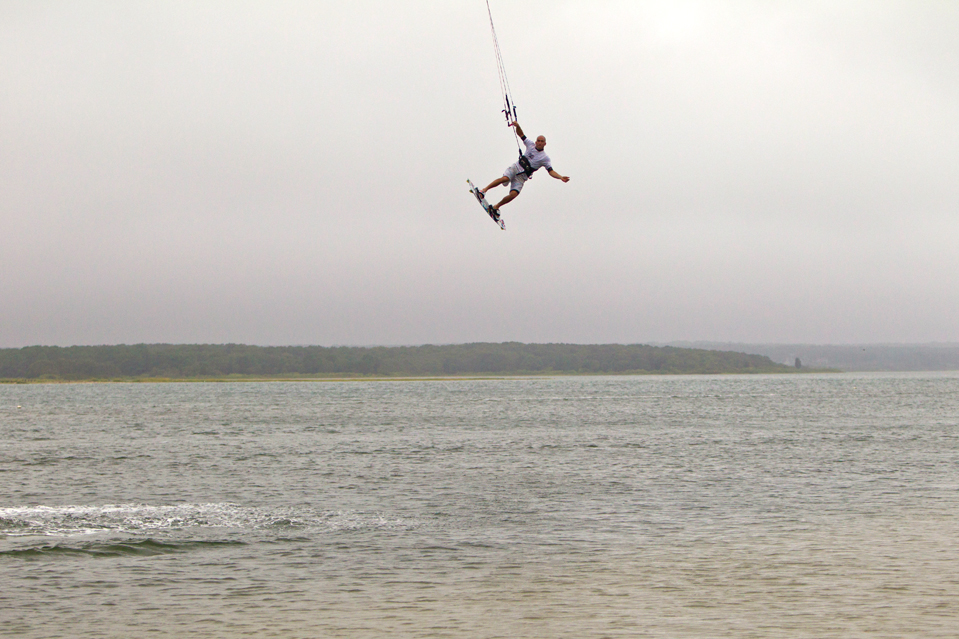 11
A kitesurfer sails on the strong winds in Sengekontacket Pond near Oak Bluffs, Mass. as Hurricane Earl approaches Martha's Vineyard. (Aram Boghosian for The Boston Globe) # 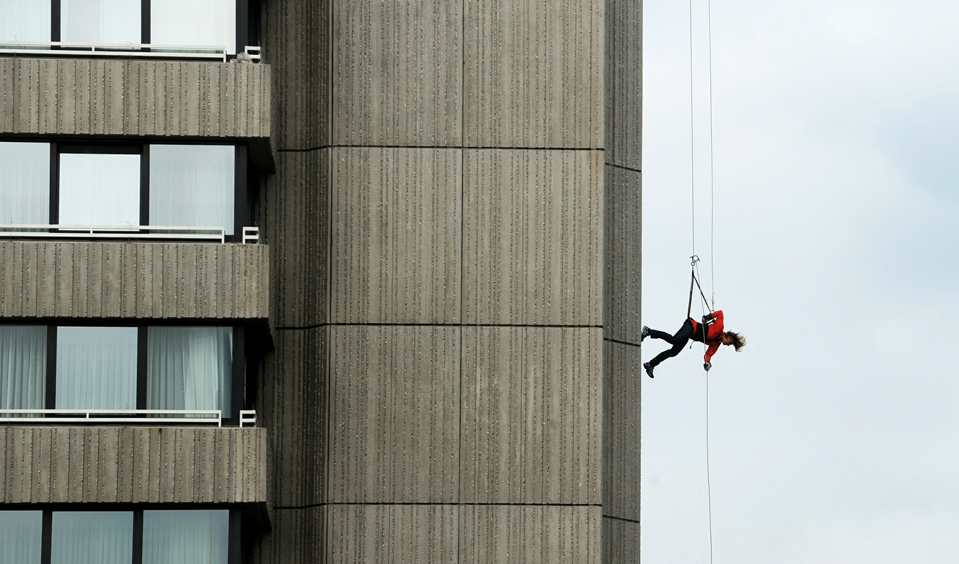 12
The visually impaired Paralympics cross-country skiing medal winner Verena Bentele walks down the side of a 60-meter wall of a high-rise building during a house running event in Munich August 19. (CHRISTOF STACHE/AFP/Getty Images) # 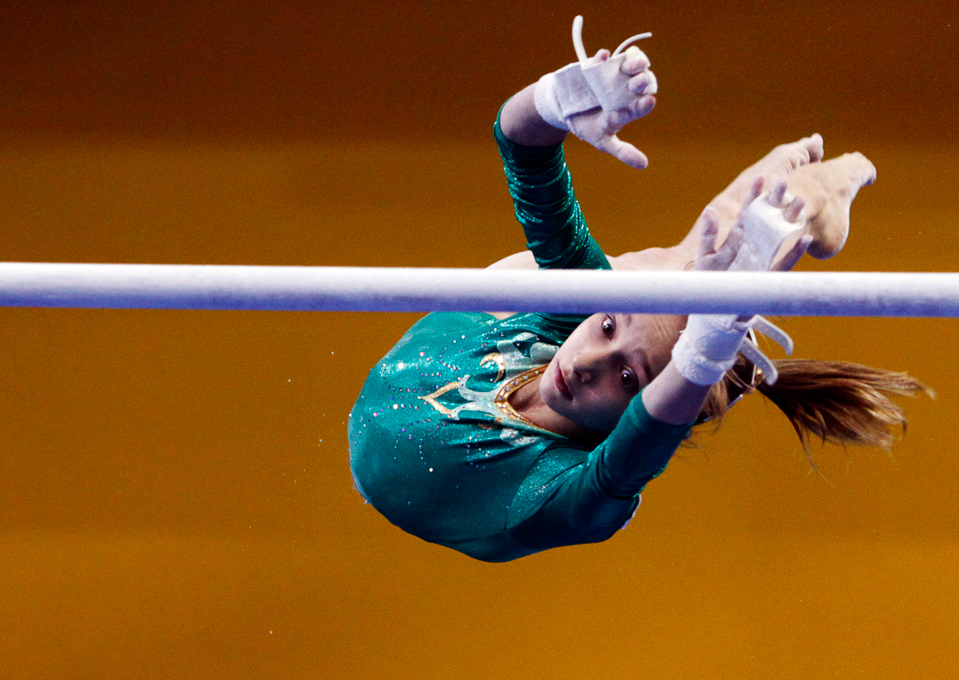 13
Viktoria Komova of Russia competes in the uneven bars in qualification during the artistic gymnastics competition at the Youth Olympic Games in Singapore August 17. (REUTERS/Issei Kato) # 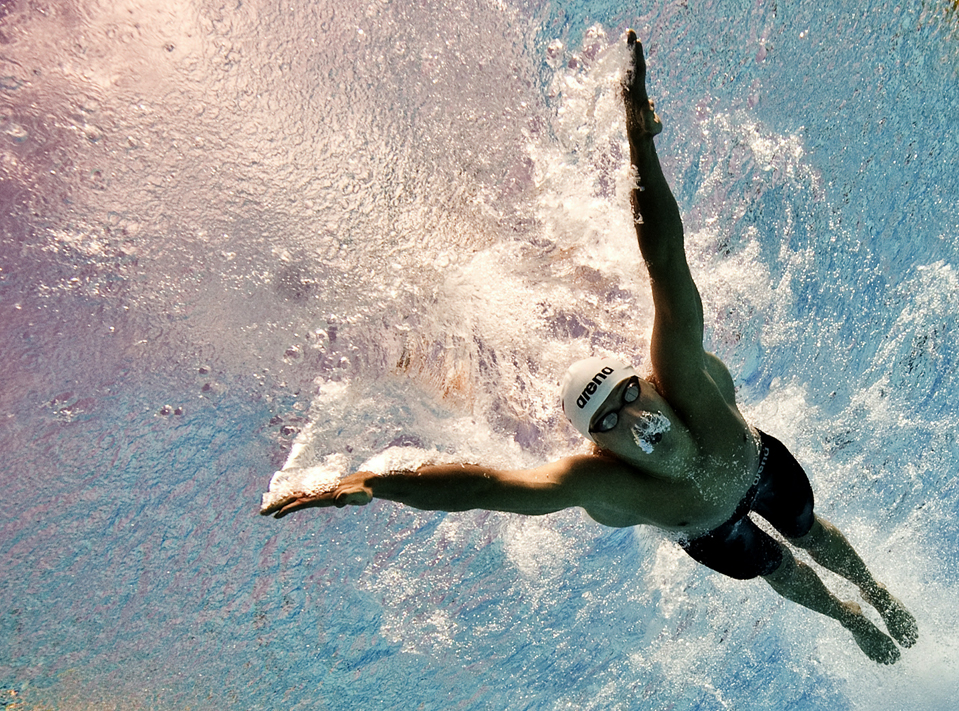 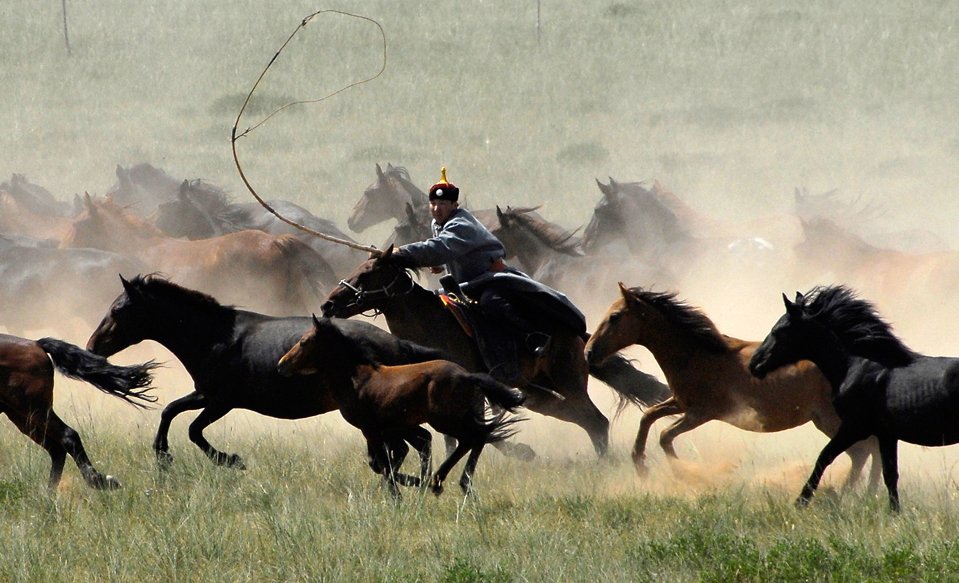 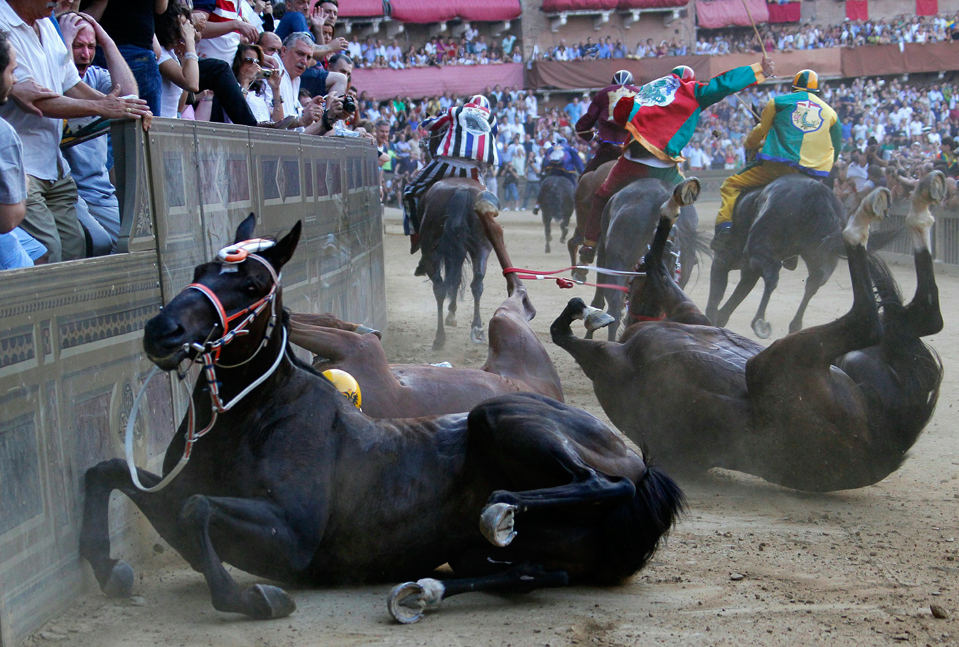 16
Horses fall down in the Casato curve during the Palio horse race July 2 in Siena, Italy. The Palio is a medieval horse race and pageant, which pits the ancient districts of Siena against each other in competition for the victory banner and in honor of the Virgin Mary. (FABIO MUZZI/AFP/Getty Images) # 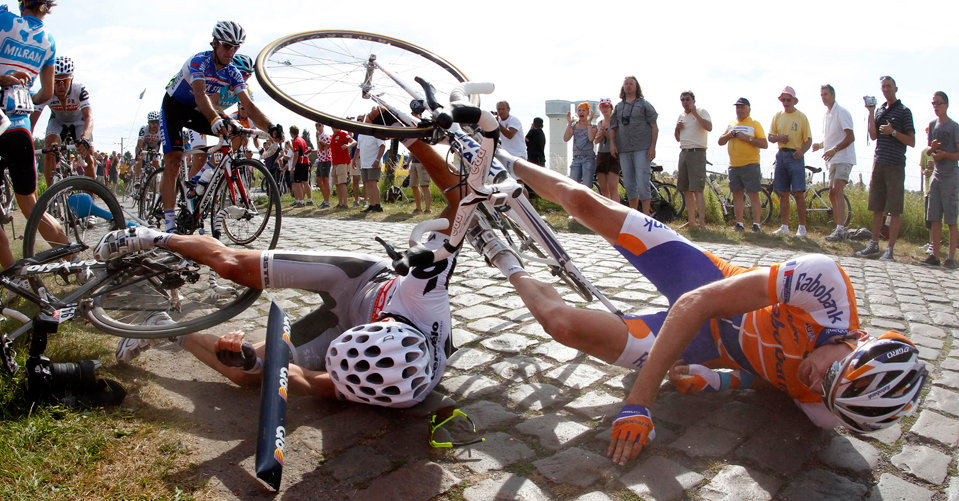 17
Riders fall on the cobblestones during the third stage of the Tour de France cycling race between Wanze and Arenberg-Porte Du Hainaut July 6. (REUTERS/Eric Gaillard) # 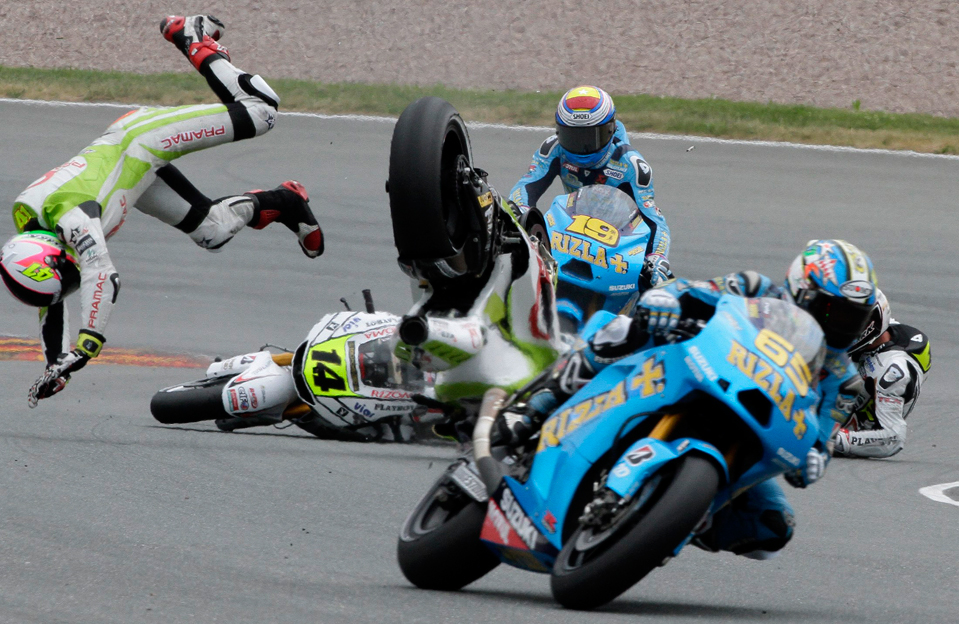 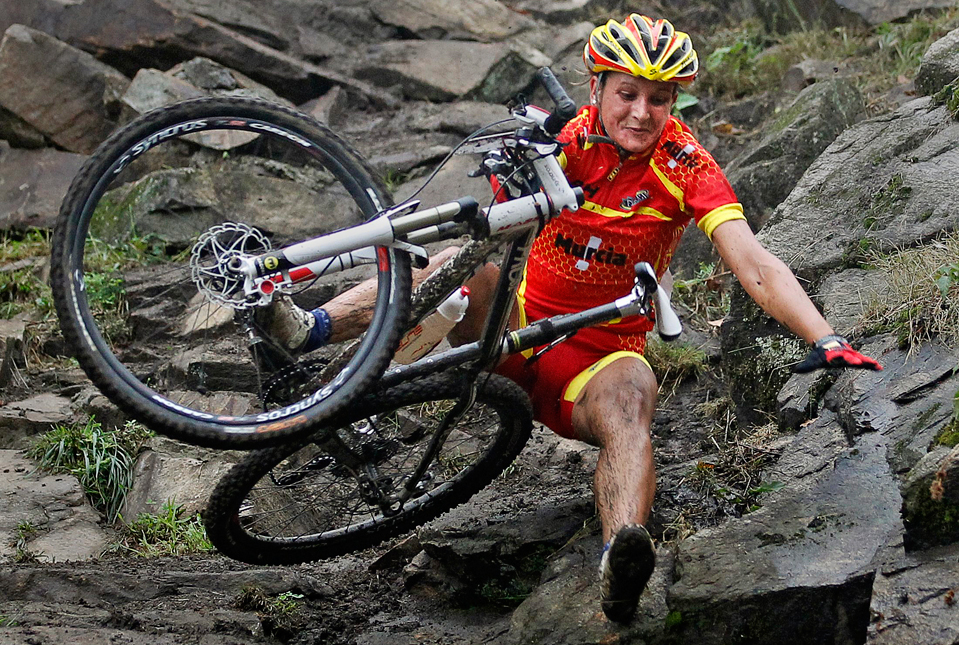 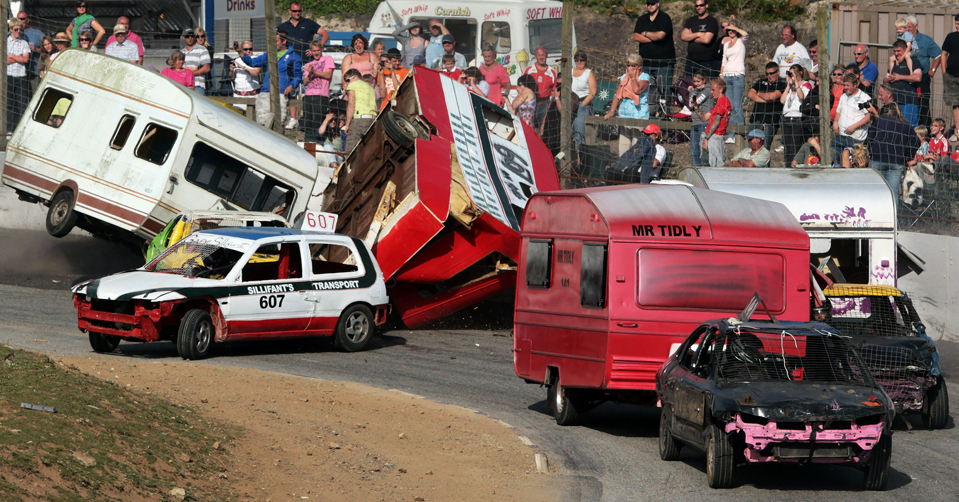 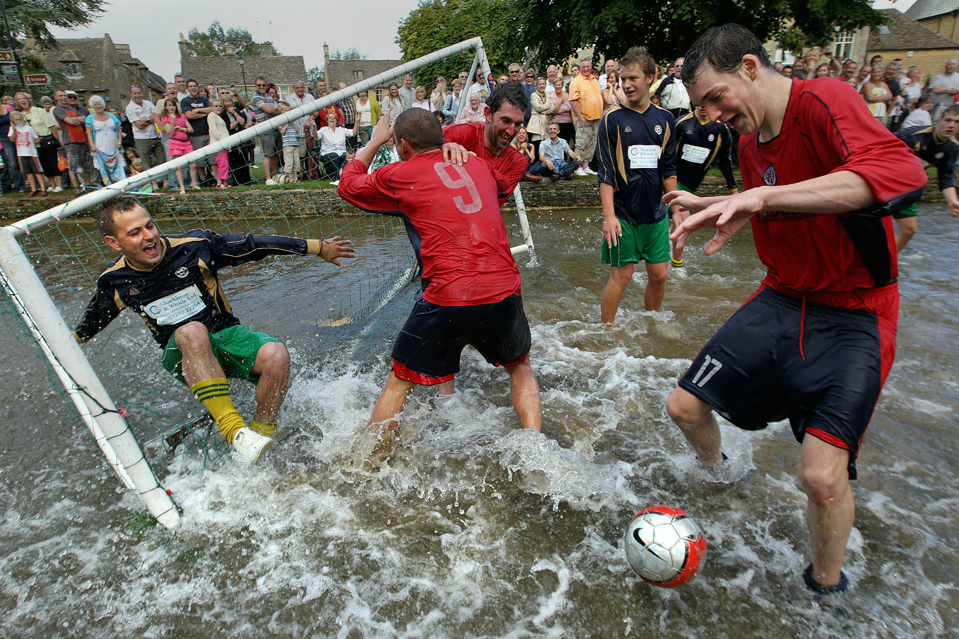 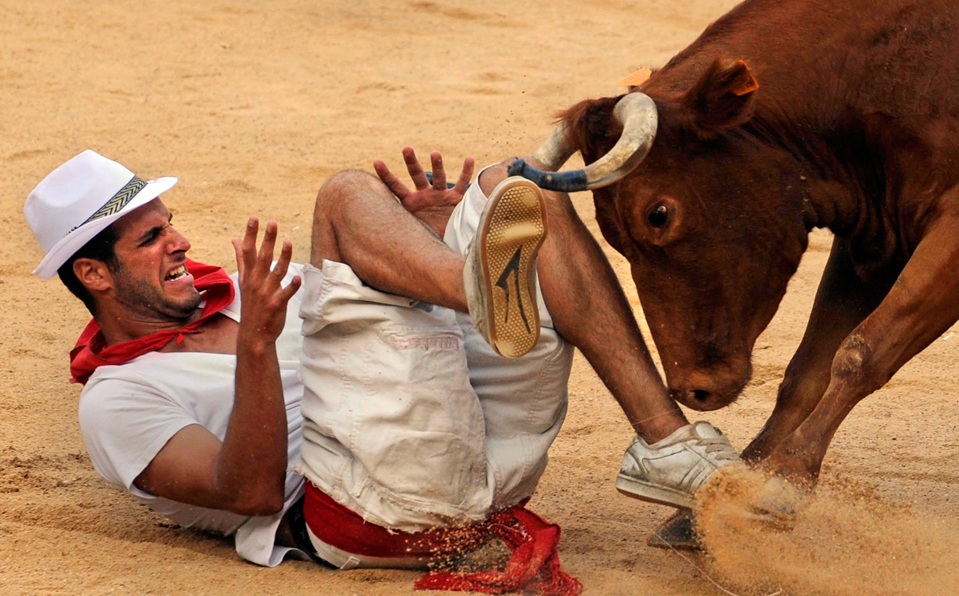 22
A bull charges a reveller in the bull ring following the third Running of the Bulls during the San Fermin festival in Pamplona July 9. (REUTERS/Eloy Alonso) # 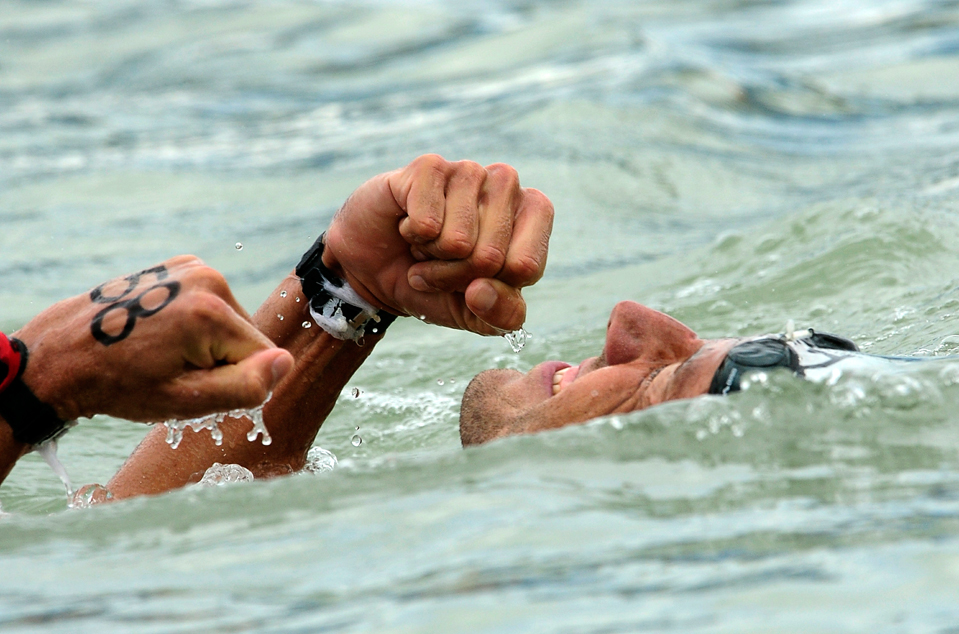 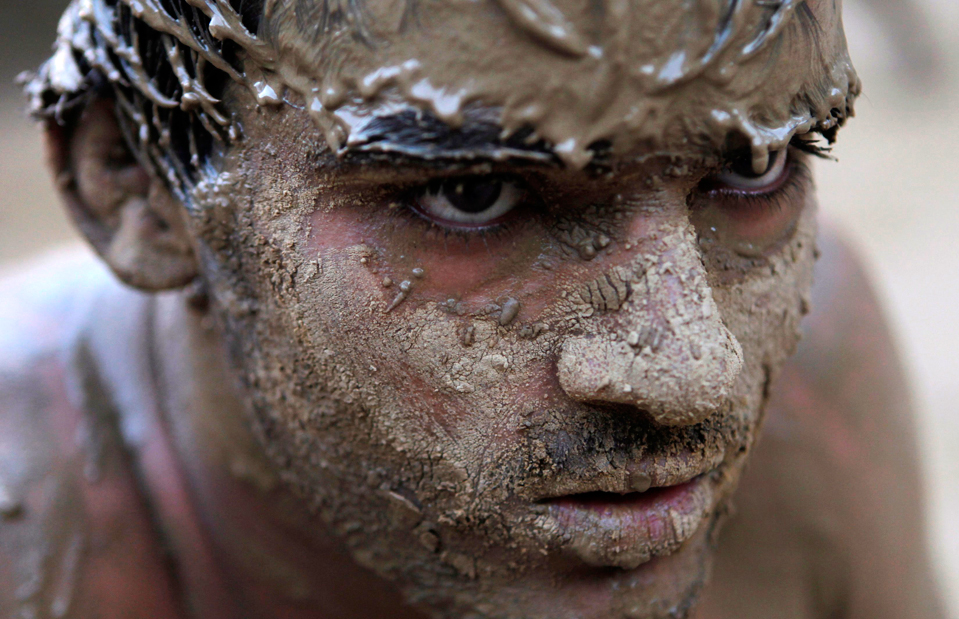 24
A wrestler pauses after practicing in the mud at an Akhaara, or traditional Kushti wrestling training center, in New Delhi September 6. (REUTERS/Adnan Abidi) # 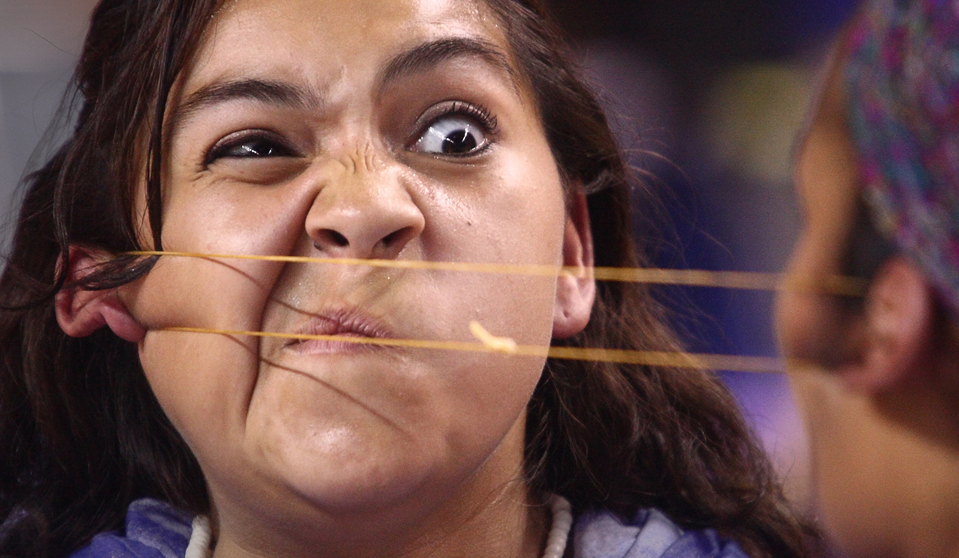 awesome final installment. That ear-pulling contest is a new one on me.

Posted by Chris January 13, 11 09:28 AM
recent entries
Advertisement
(only click once)