This week Big Shots brings you our first coverage of Saluki racing in Qatar, the first World Surfing Reserve in Malibu, and what is surely not the last pictures of fans in goofy headgear. There's also the first Alpine skiing picture of the season, and the return of the NHL. Next week I hope to have a big post from the Commonwealth Games in India, which ended yesterday. ( 30 photos total) 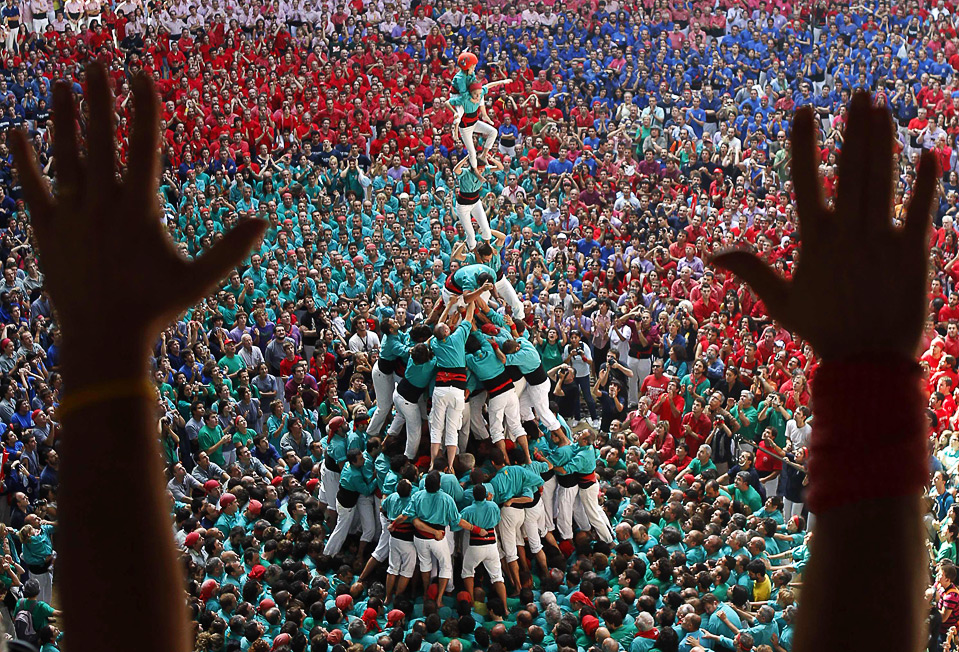 The group 'Castellers de Vilafranca' falls after forming a human tower called 'Castell' during a biannual competition in Tarragona, Spain October 3. The formation of human towers is a tradition in the area of Catalonia and between 100 and 200 people are needed to complete a big tower. (REUTERS/Albert Gea) 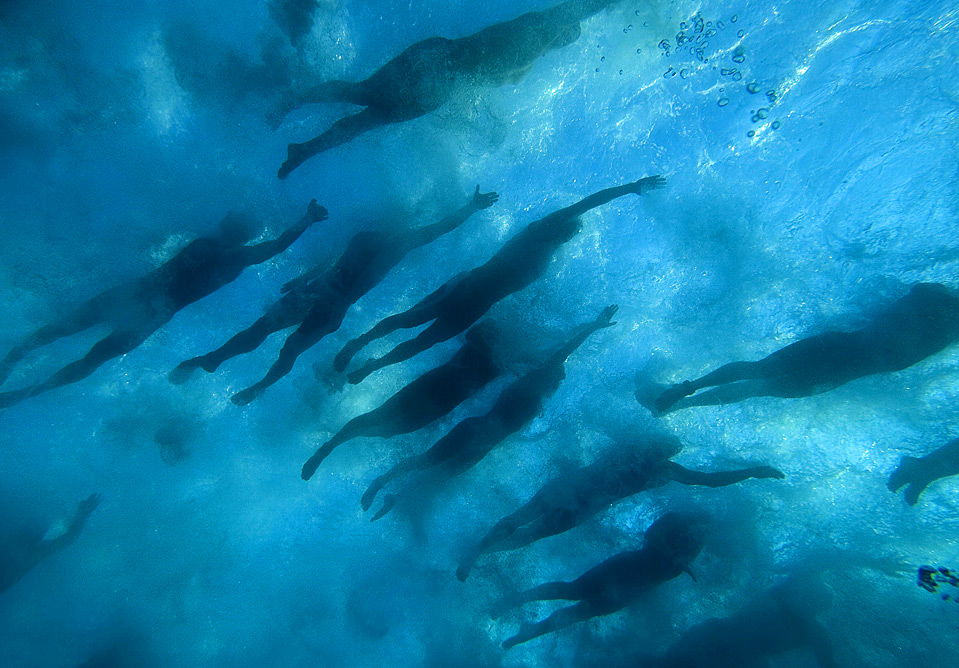 3
Mati Waiya from the Chumash Nation conducts the dedication ceremony for the iconic Malibu Surfrider Beach to become the first "World Surfing Reserve" October 9. Malibu has one of the world's perfect waves, but has struggled with water quality in recent years. The WSR program, inspired by UNESCO's World Heritage Sites, helps the surfing community to identify and preserve surfing heritage, and raise environmental awareness at important surf breaks. (MARK RALSTON/AFP/Getty Images) # 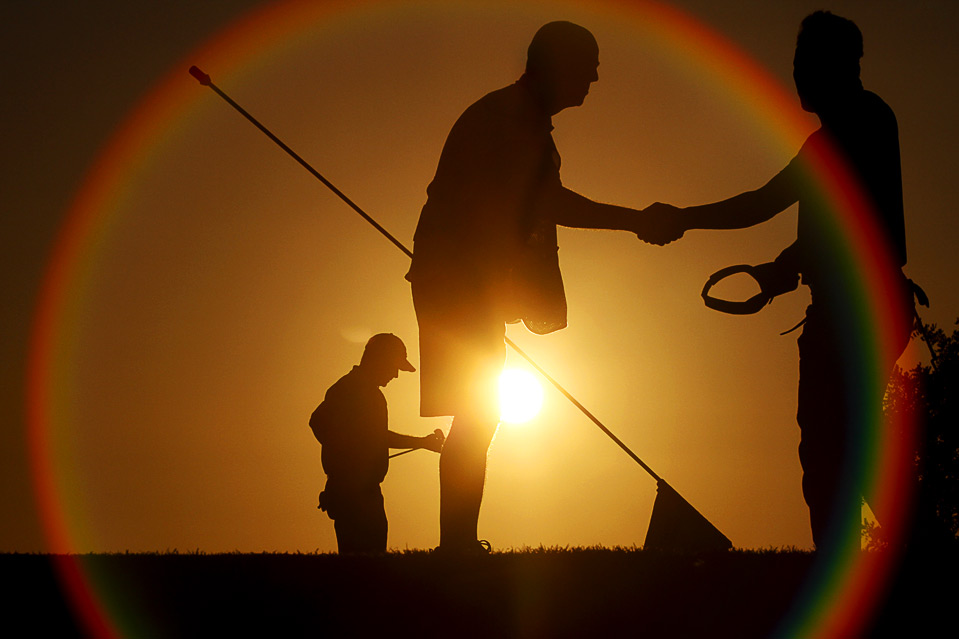 4
Golfers and caddies greet each other after completing their first round during the Portugal Masters golf tournament October 4 at Victoria golf course in Vilamoura, Portugal. (AP Photo/ Francisco Seco) # 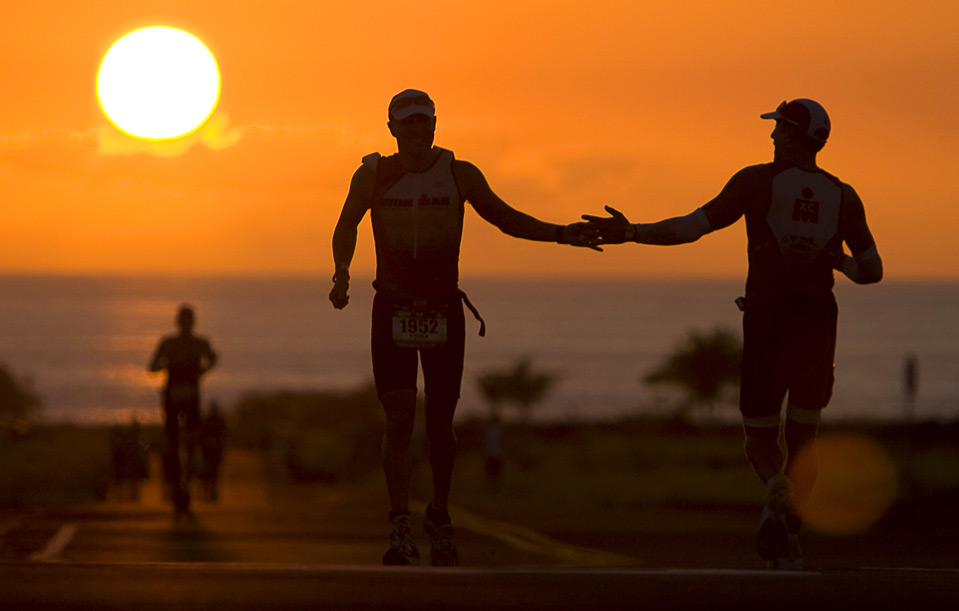 5
Steven Pressman (center) slaps hands as he passes another runner near the halfway point at the "Energy Lab" on the marathon section of the Ironman World Championship triathlon in Kailua-Kona, Hawaii October 9. (REUTERS/Hugh Gentry) # 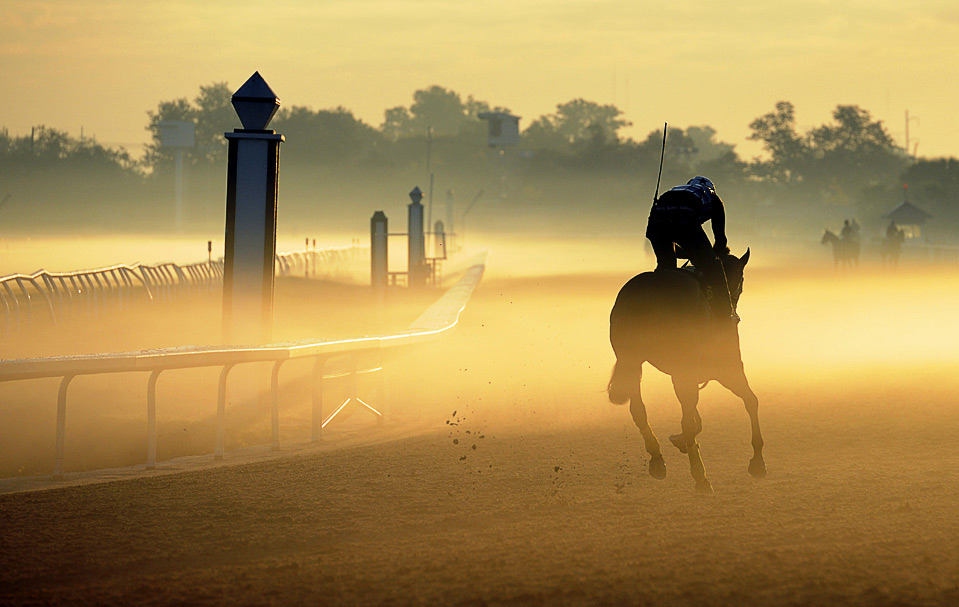 6
A horse makes his way through the early morning fog at the Fair Grounds Race Course in New Orleans October 11. (AP Photo/Alexander Barkoff) # 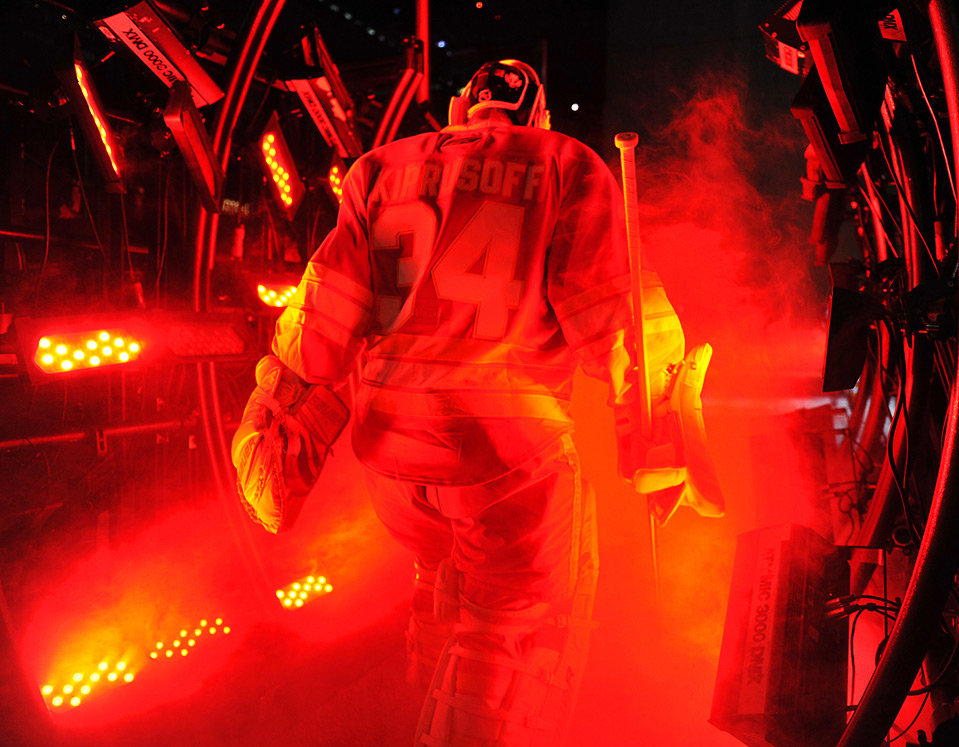 7
The Calgary Flames' Miikka Kiprusoff gets ready to take to the ice in the Flames' NHL hockey home opener against the Los Angeles Kings in Calgary October 10. (REUTERS/Todd Korol) # 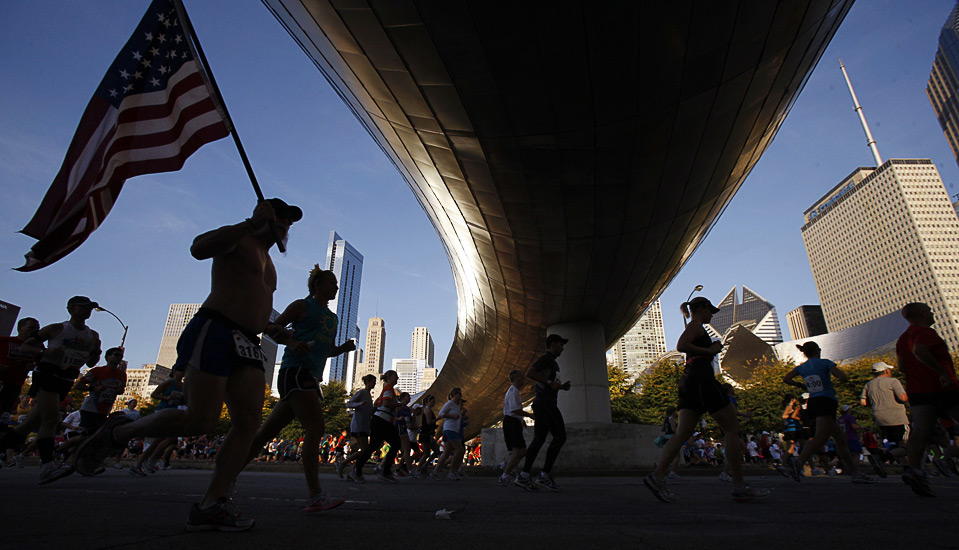 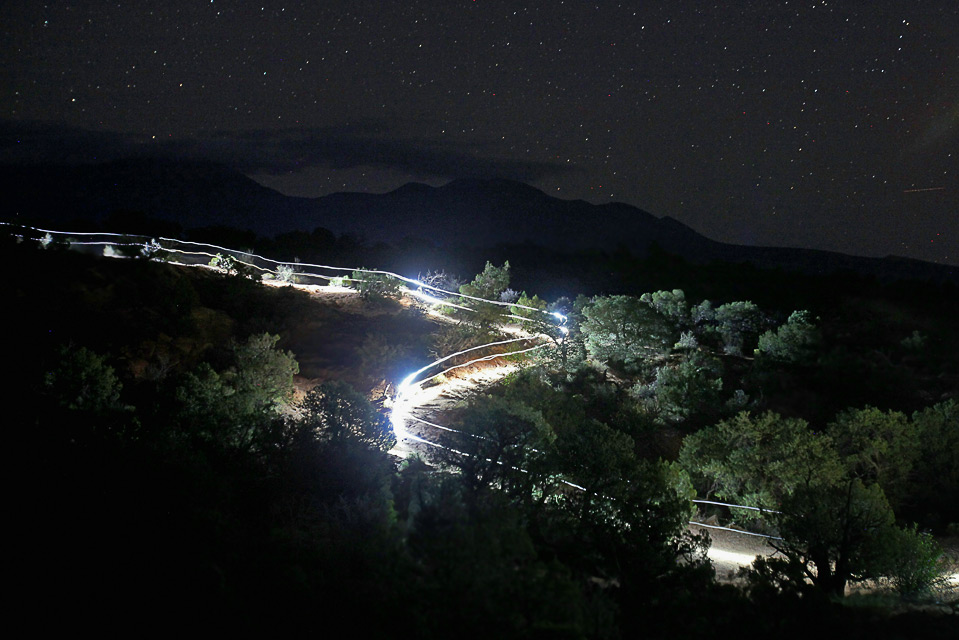 9
Competitors streak through the woods with their head lamps lighting the course as darkness falls and the stars come out on the 24 Hours of Moab Mountain Bike Race October 9 in Moab, Utah. More than 1000 mountain bikers are estimated to complete more than 7000 laps on the 14.9 mile course. (Doug Pensinger/Getty Images) # 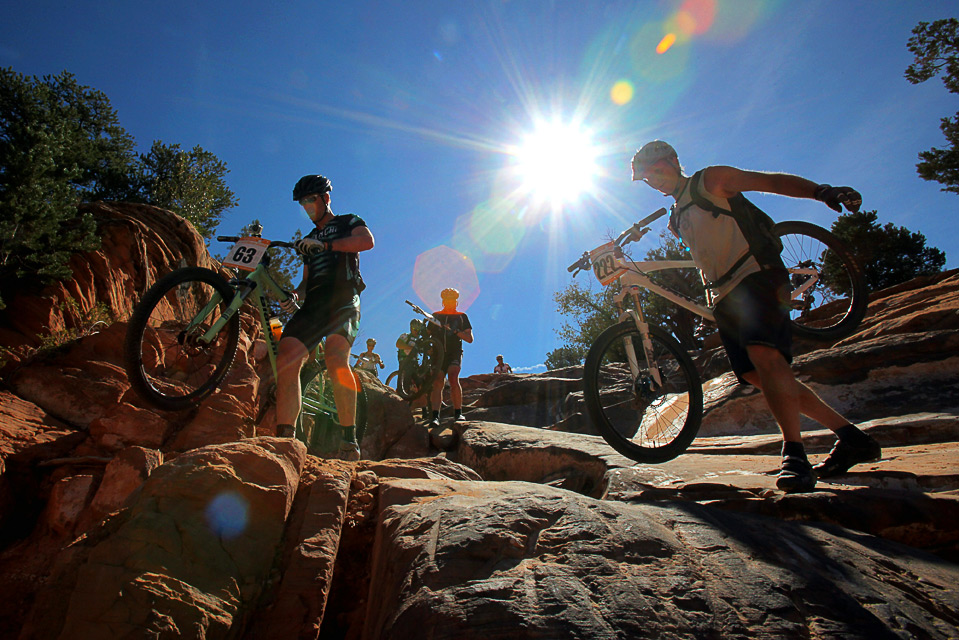 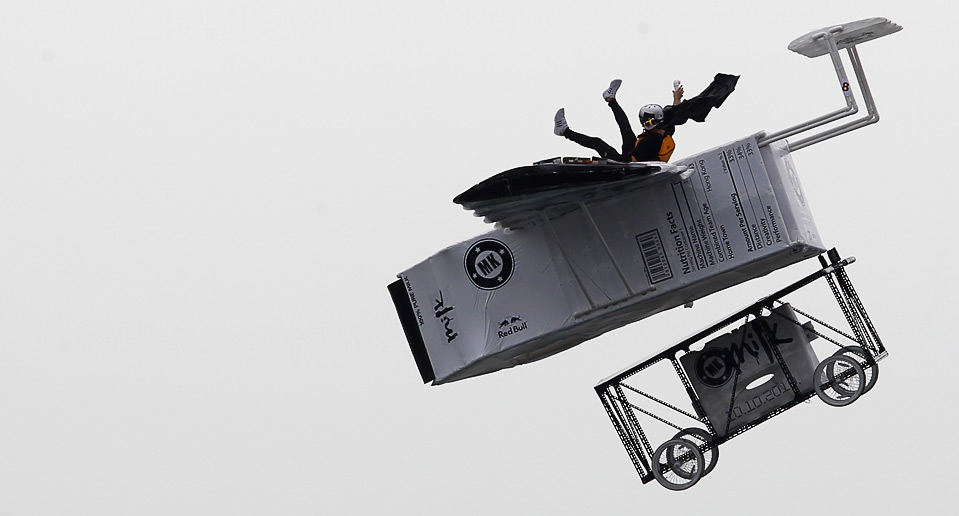 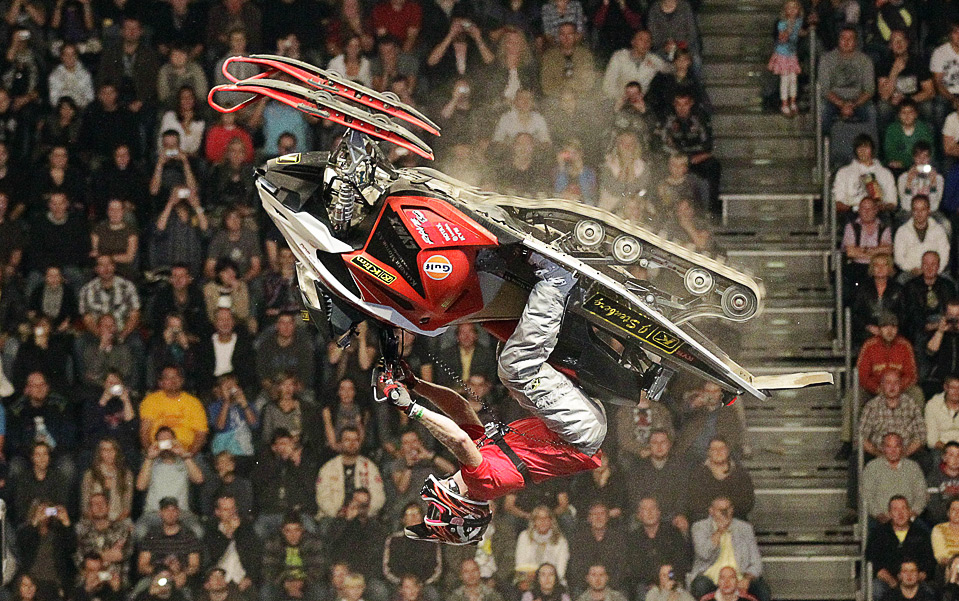 12
Fabian Bauersachs sets a world record with a backflip of a snowmobile during the Night of the Jumps at the FIM Freestyle MX World Championships in Cologne October 9. (AP Photo/Frank Augstein) # 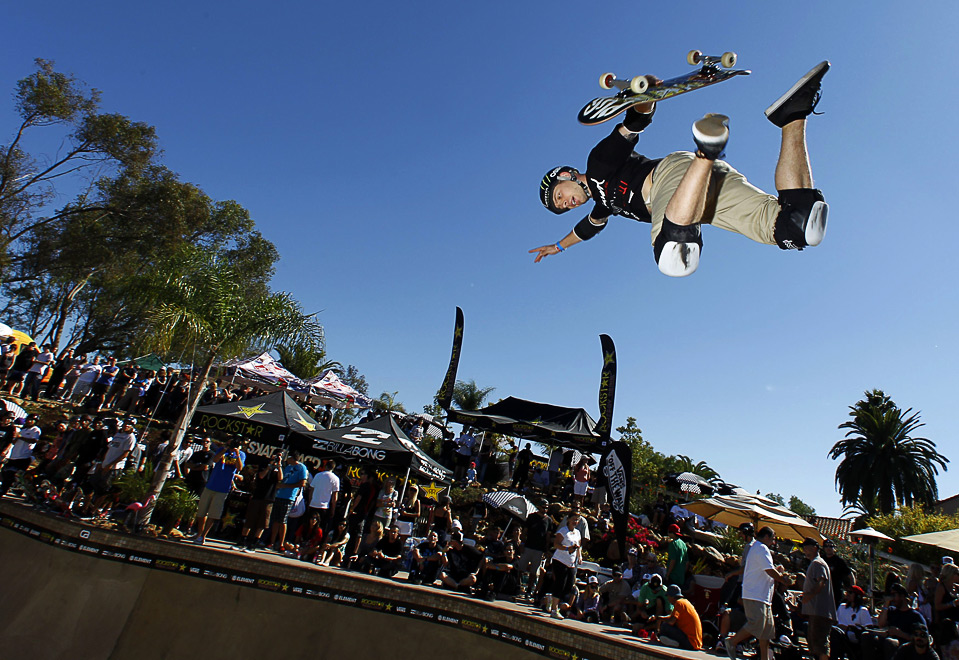 13
Pierre-Luc Gagnon sails out of an empty swimming pool in the backyard of professional skateboarder Bucky Lasek's house as he participates in a local fund-raising event known as Bucky Lasek's Barbeque in Encinitas, California October 10. (REUTERS/Mike Blake) # 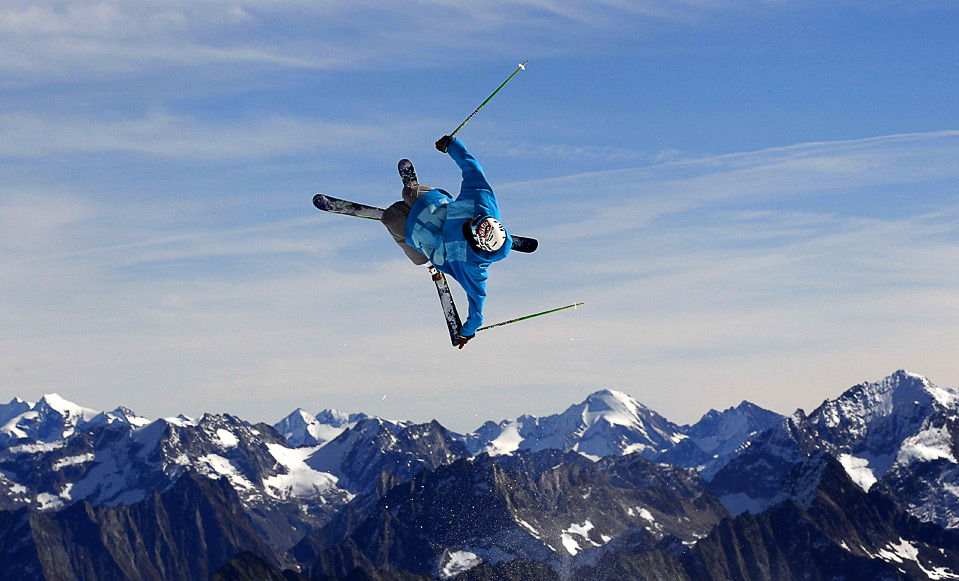 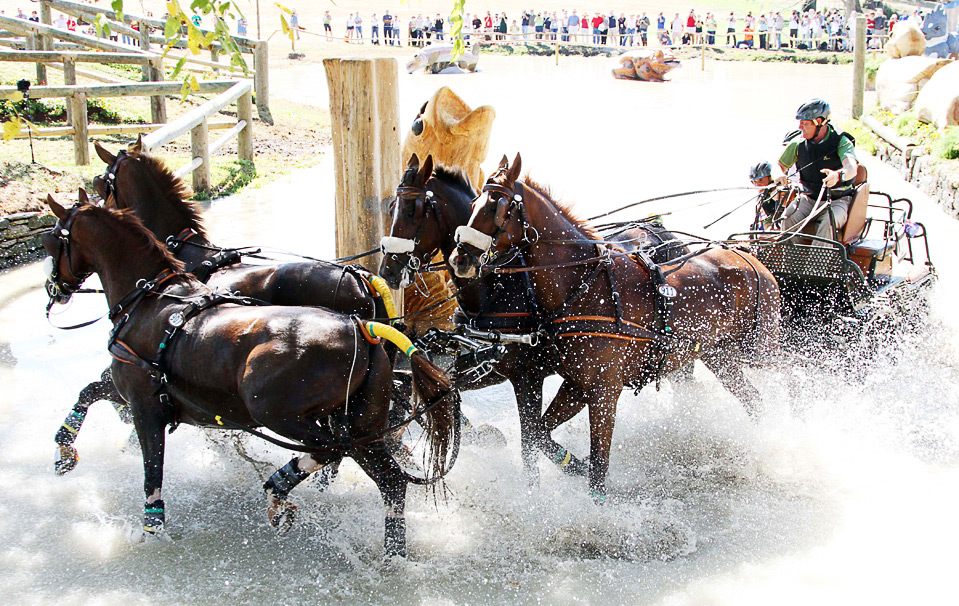 17
Gavin Robson of Australia drives his team during the marathon event at the World Equestrian Games in Lexington, KY October 9. (AP Photo/James Crisp) #

18
Dog breeders try to encourage their Salukis as they drive alongside them during the first Gulf Challenge of the Arabian Saluki Championship in the Qatari desert near Khor October 10. The race consists of Saluki dogs, which are popular with Bedouin tribes in the Gulf countries for racing, chasing after a gazelle along a 2km route. (REUTERS/Stephanic McGehee) # 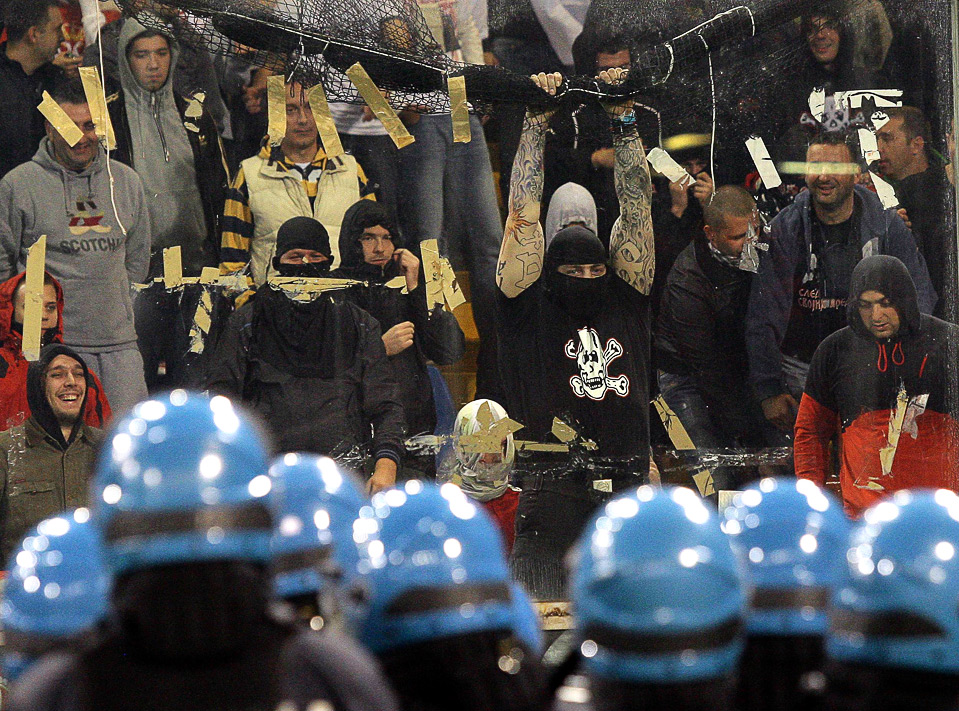 19
Police officers stand in front of supporters of Serbia's soccer team before the Euro 2012 qualifying soccer match against Italy at the Luigi Ferraris stadium in Genoa October 12. The match was suspended after just six minutes and was likely to be abandoned when Serbian fans threw flares onto the pitch and at Italian fans. (REUTERS/Alessandro Garofalo) # 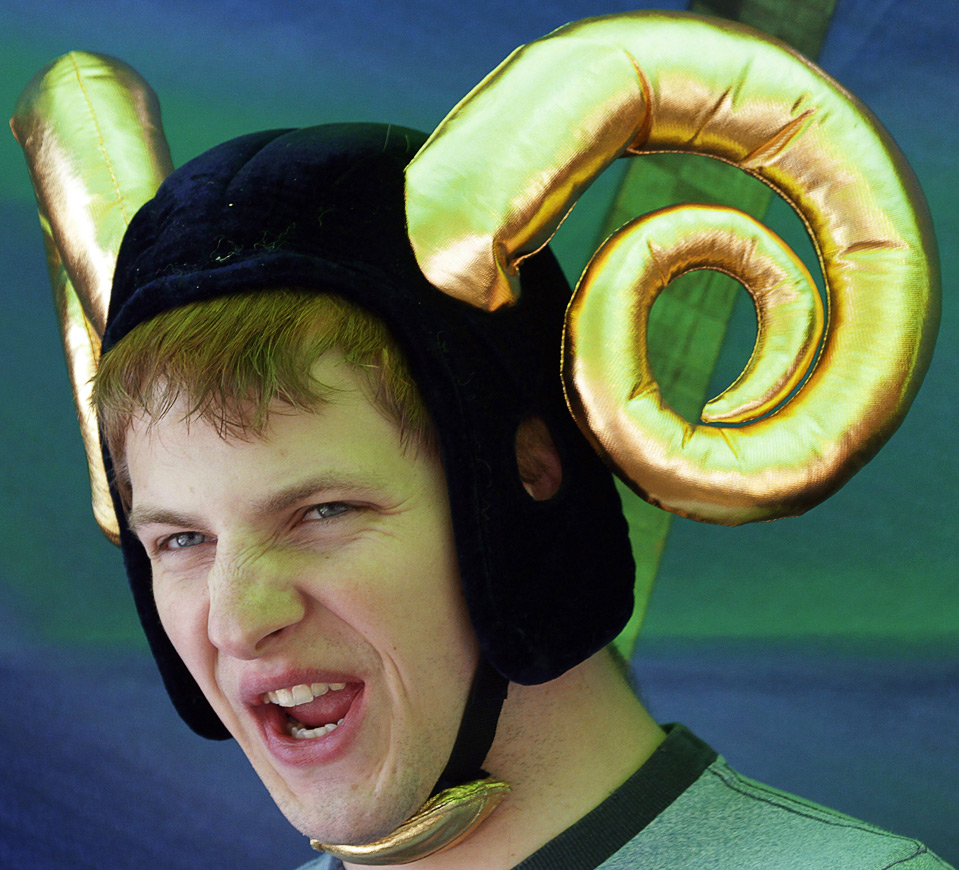 20
St. Louis Rams fan Ben Johnson gets in the spirit of the game before the start of an NFL football game against the Seattle Seahawks in St. Louis. (AP Photo/Seth Perlman) # 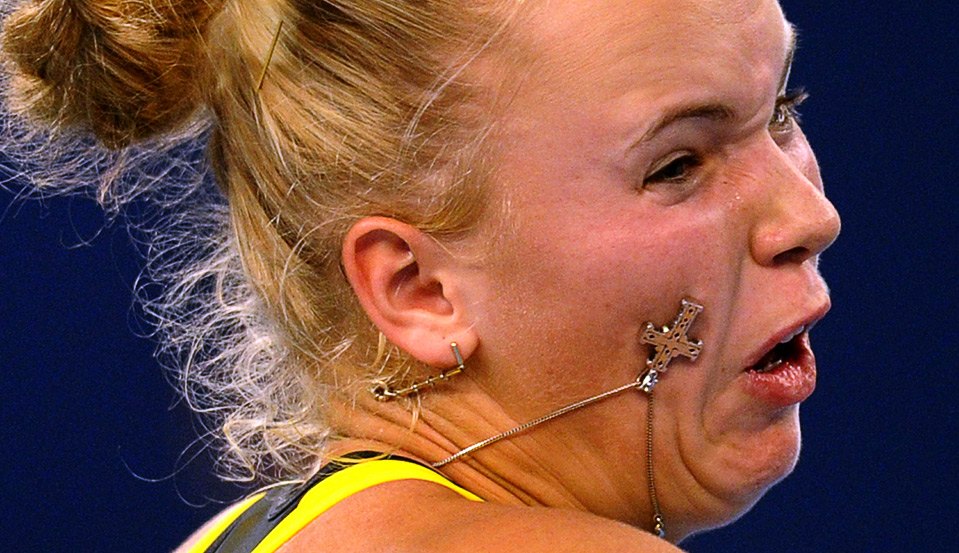 21
Caroline Wozniacki hits a return against Shahar Peer during their singles semifinal in the China Open tennis tournament at the National Tennis Center in Beijing October 9. (LIU JIN/AFP/Getty Images) # 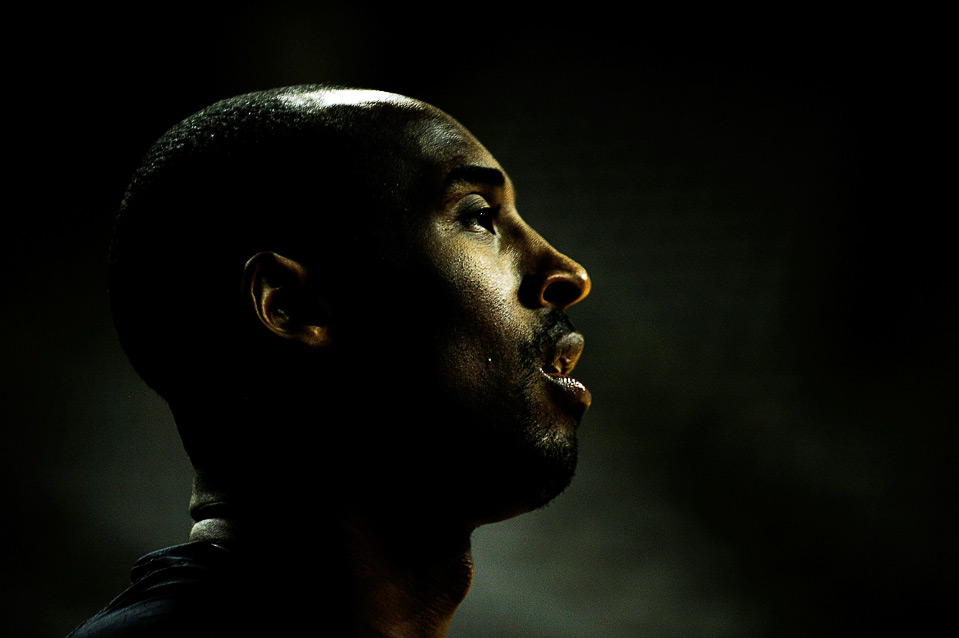 22
Kobe Bryant of the Los Angeles lakers pauses before the NBA Europe Live match against Regal FC Barcelona at the at Palau Blaugrana October 7 in Barcelona. (David Ramos/Getty Images) # 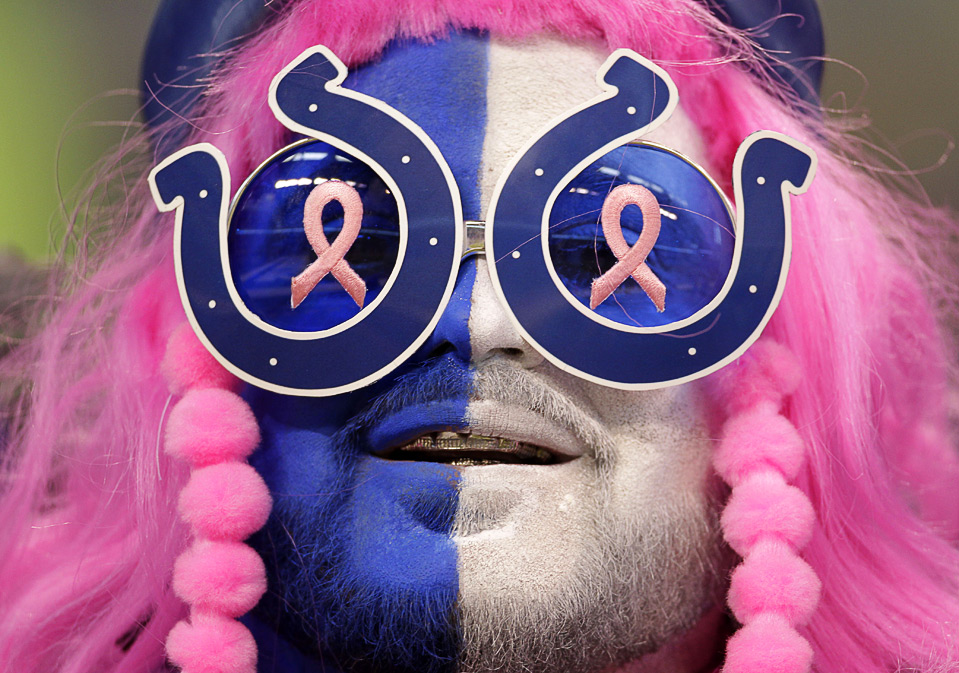 23
Indianapolis Colts fan Brandon Gardner sports a pink wig as he cheers for the Colts before the NFL football game against the Kansas City Chiefs in Indianapolis October 10. (AP Photo/Darron Cummings) # 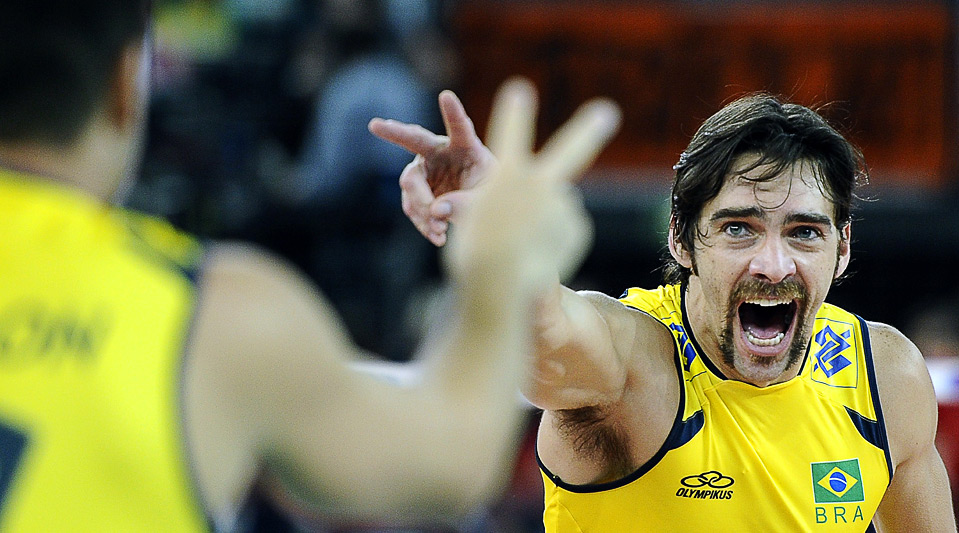 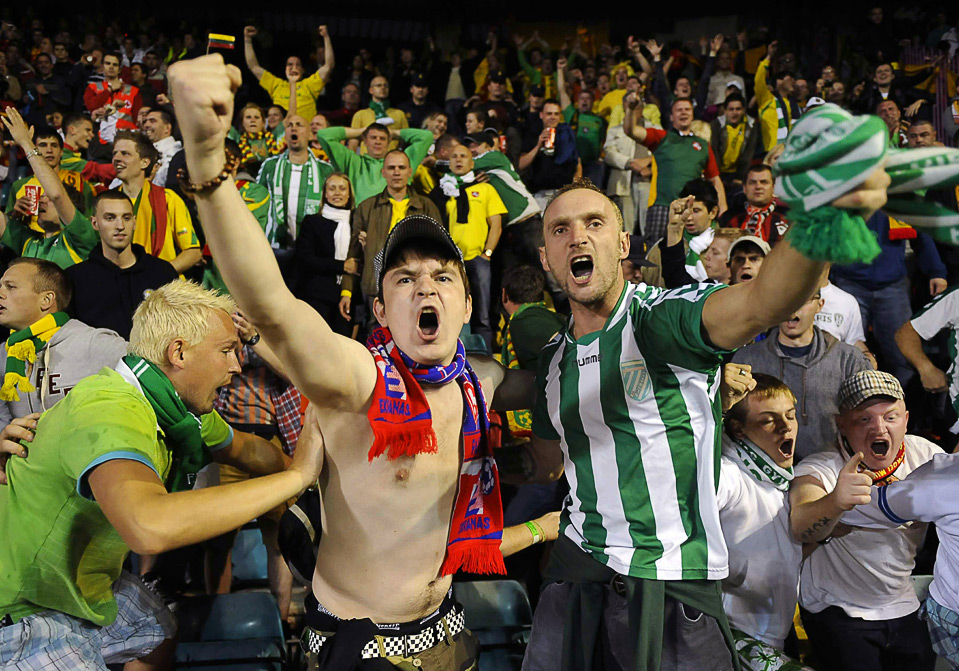 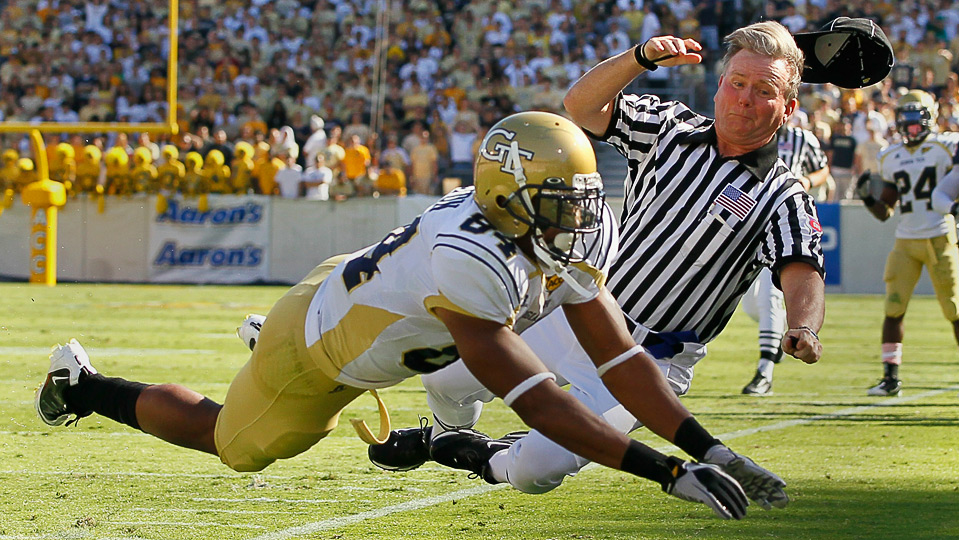 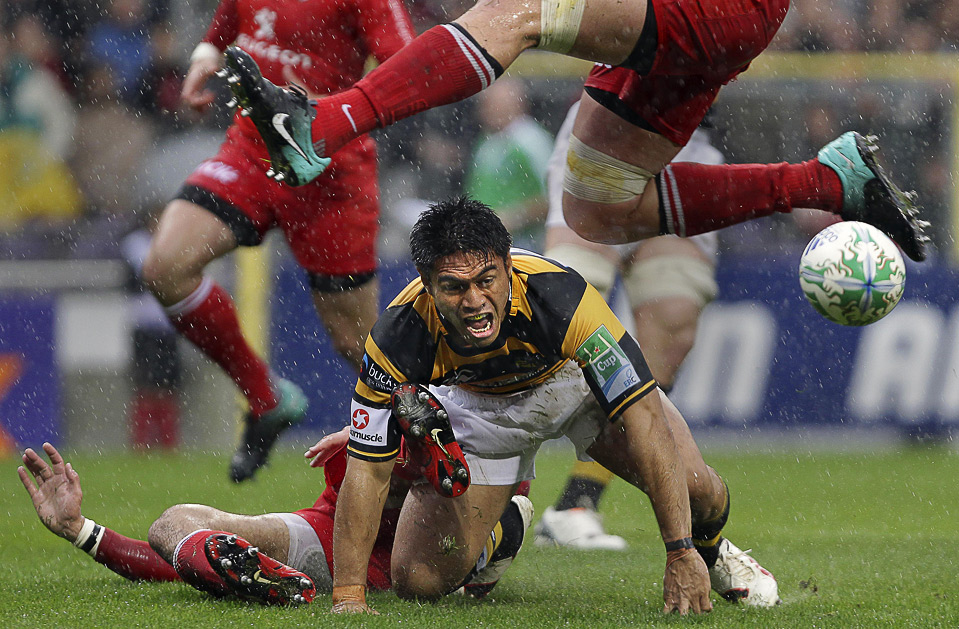 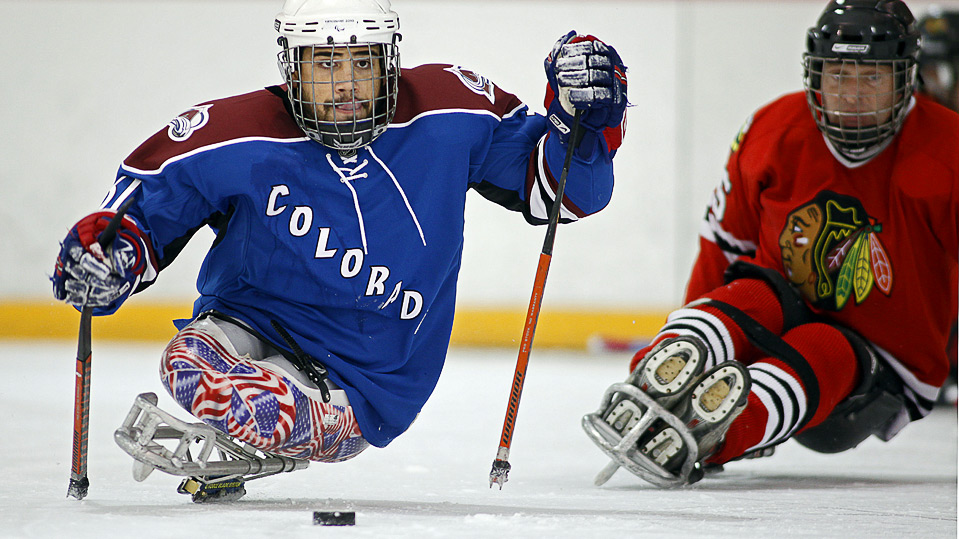 28
Nikko Landeros of the Colorado Avalanche sled hockey team chases after a loose puck in front of Richard Byrne of the Chicago Blackhawks during the semifinals of the first annual USA Hockey Sled Classic October 9 at the Edge Ice Arena in Littleton, Colorado. (Marc Piscotty/Getty Images) # 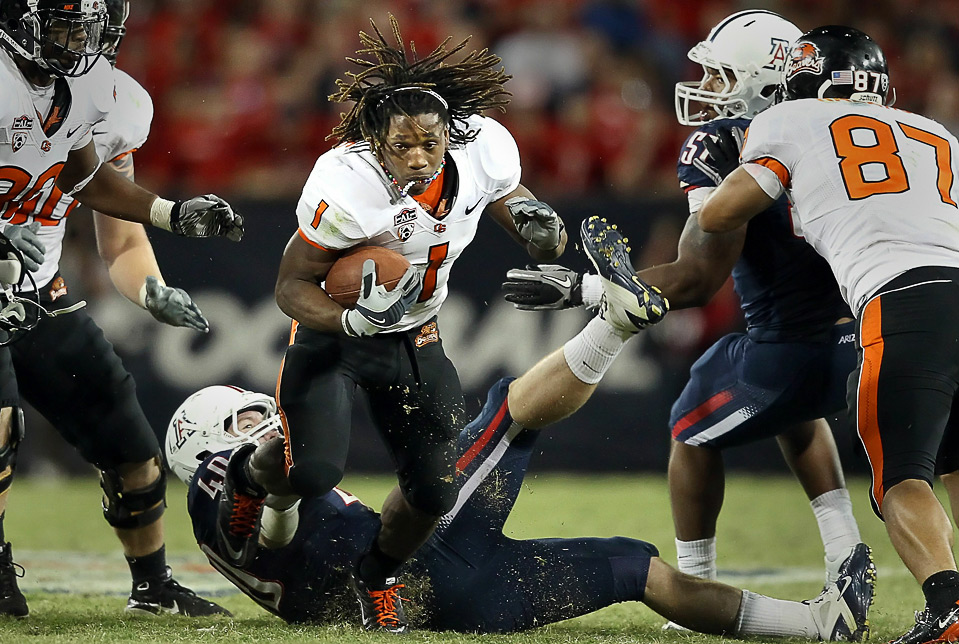 29
Runningback Jacquizz Rodgers of the Oregon State Beavers rushes the football after losing his helmet during an NCAA college football game against the Arizona Wildcats at Arizona Stadium October 9 in Tucson. (Christian Petersen/Getty Images) # 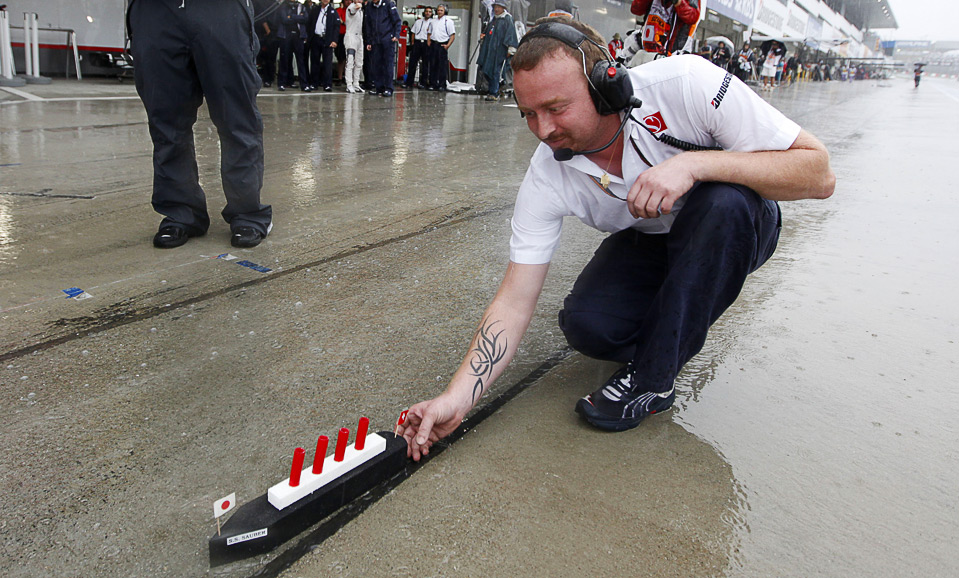 30
A mechanic sails a toy boat down a river of water flowing through pit lane as teams waited for the qualifying session to begin at the Suzuka Circuit for the Japanese Grand Prix in central Japan October 9. Qualifying was postponed due to the heavy rain at Suzuka. (AP Photo/Mark Baker) #