This week Big Shots dips into chilly waters in both England and China, and sets sail in Australia for the Sydney Hobart yacht race. Then it's on to dune racing in Saudi Arabia and snowboarding in Colorado. There's more, of course, as the year draws to a close and I prepare the last installment of the 100 Best Sports Photos of 2009, which I'll post on Thursday. ( 21 photos total) 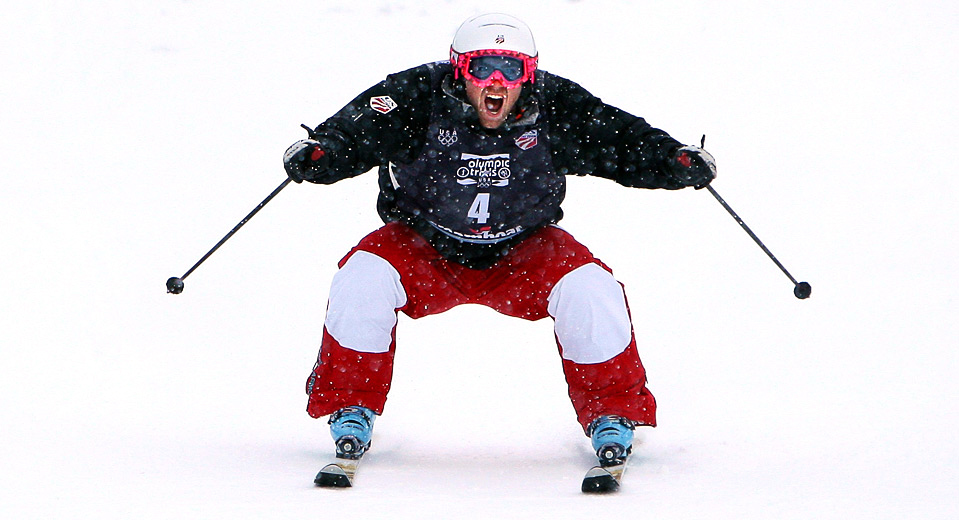 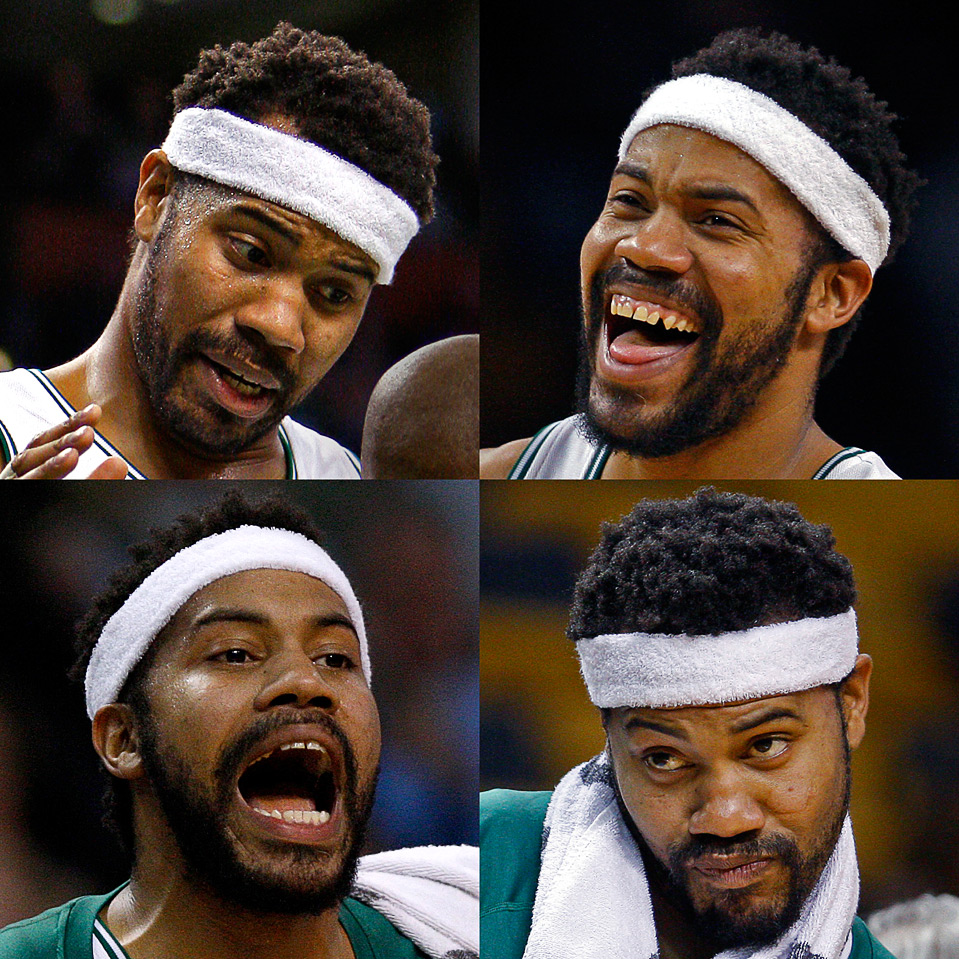 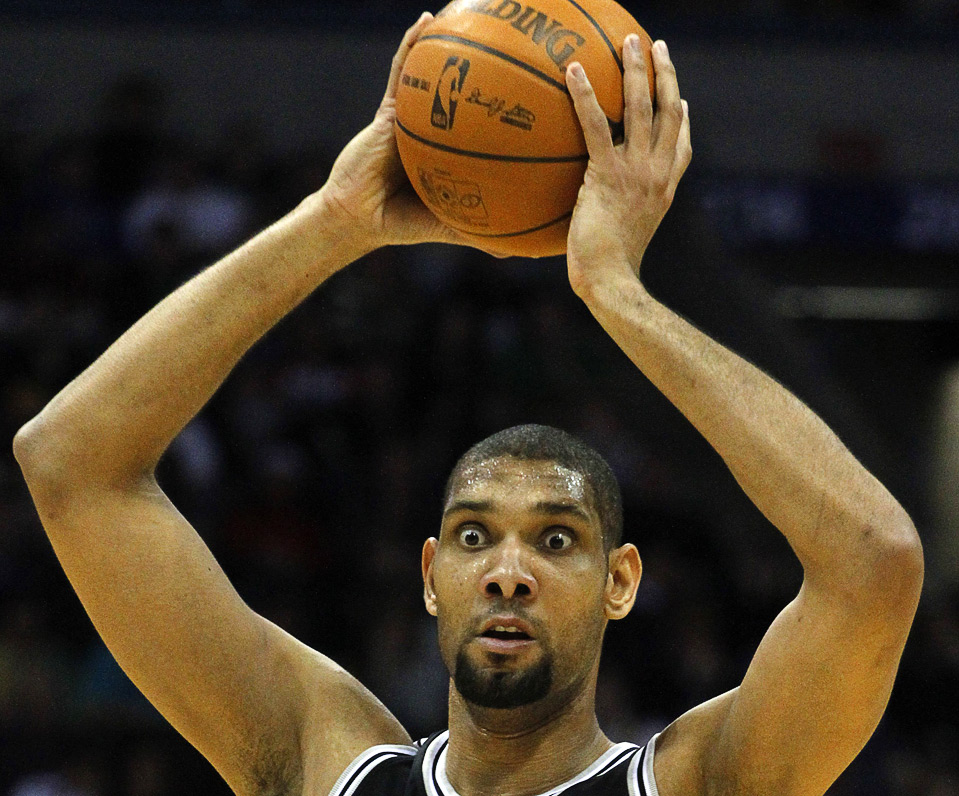 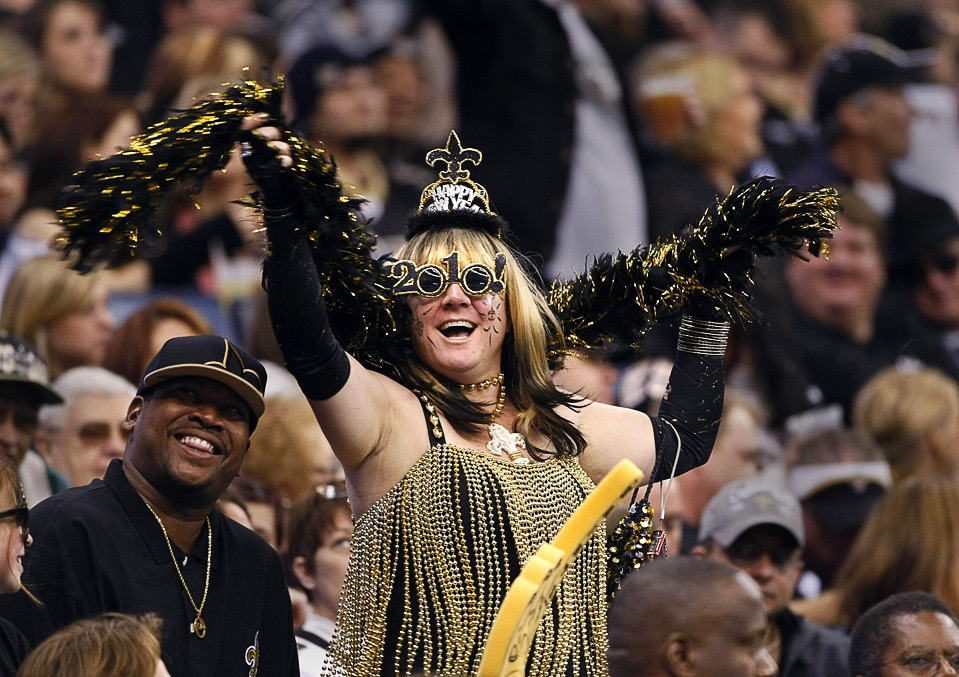 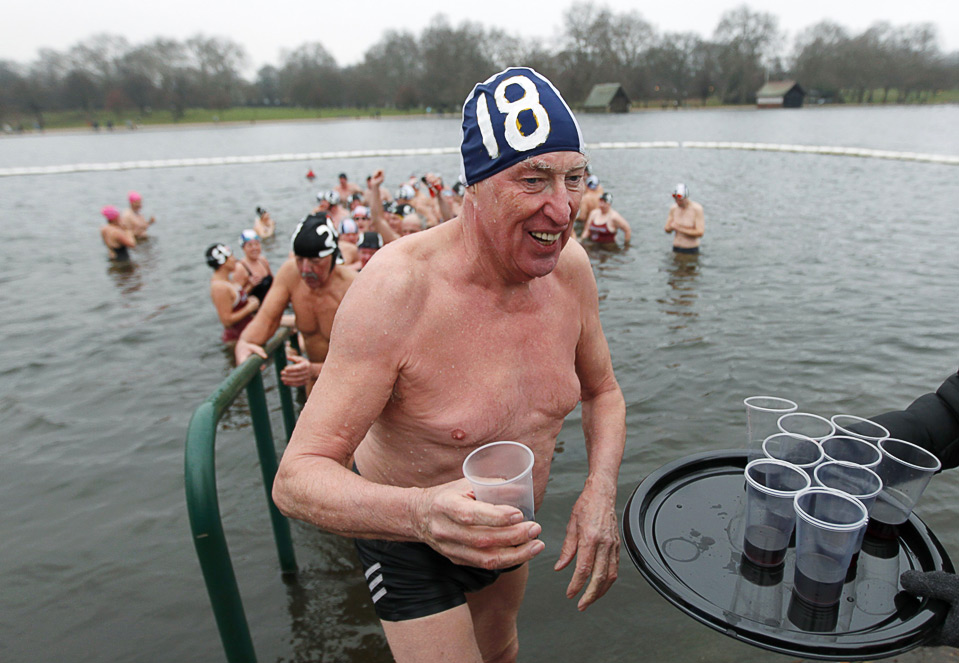 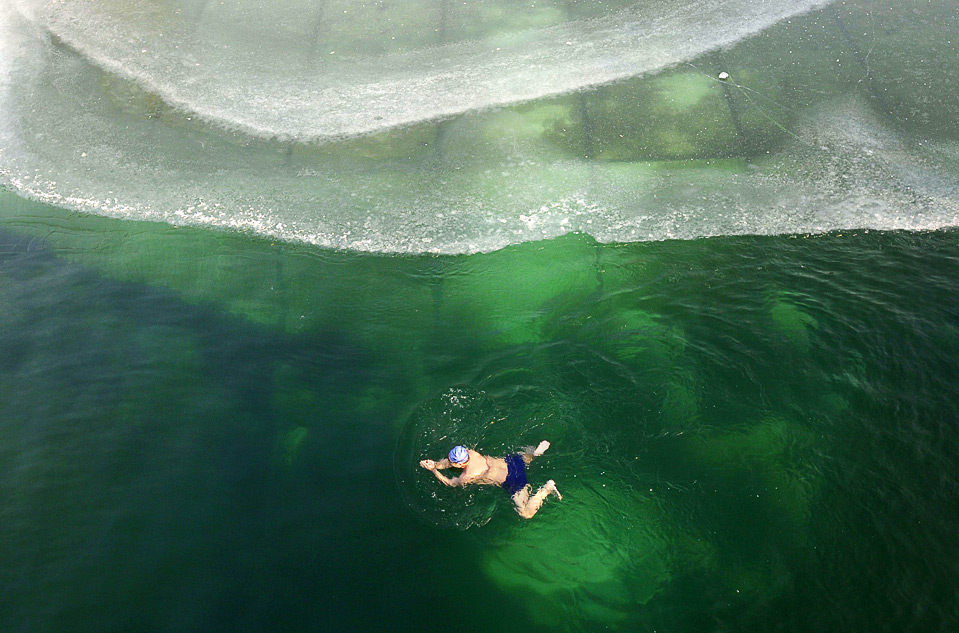 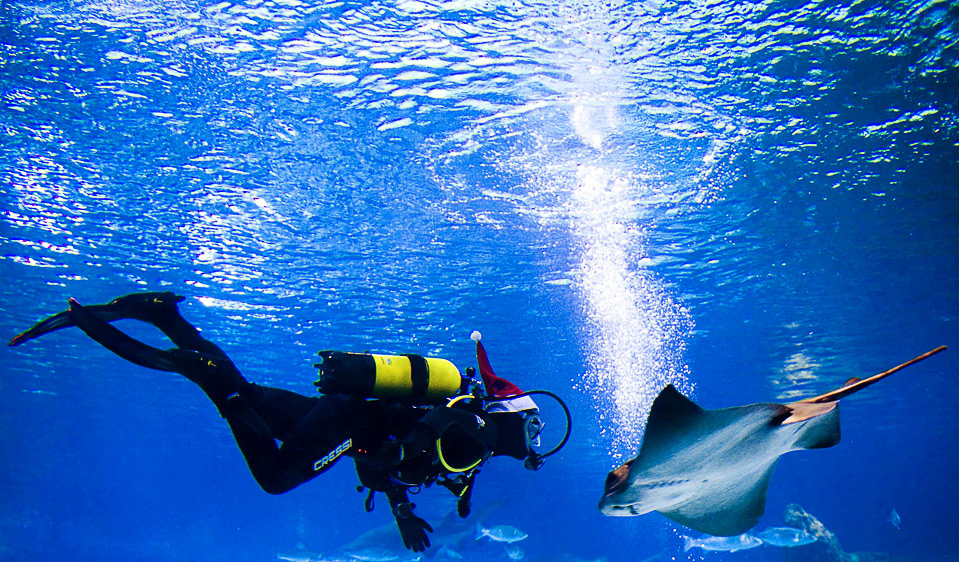 7
FC Barcelona's Bojan Krkic wears a Santa Claus hat as he dives with a manta ray at the Aquarium in Barcelona December 23. (AP Photo/David Ramos) # 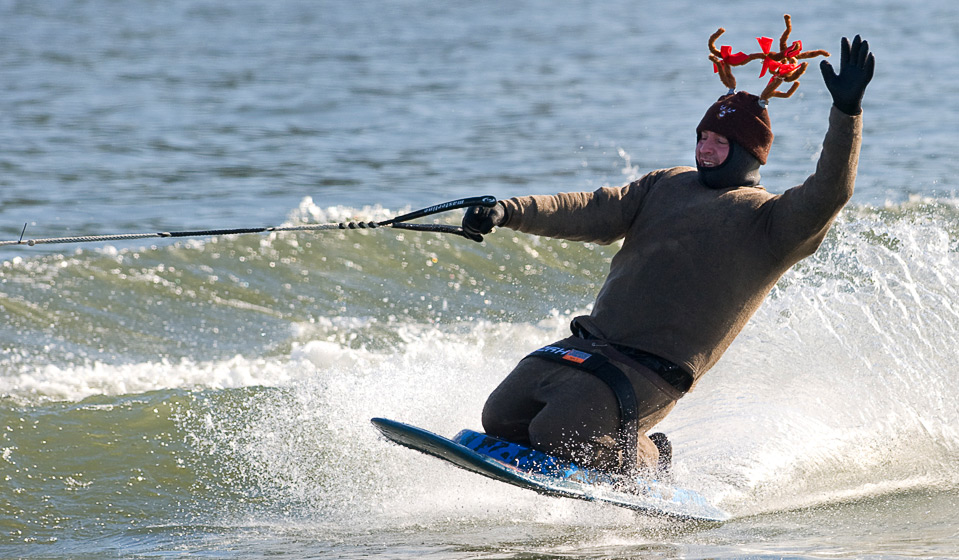 9
A kneeboarding reindeer joined elves, a snowman, and Santa for a water-skiing show on the Potomac River at National Harbor in Prince George's County, Md. December 24. # 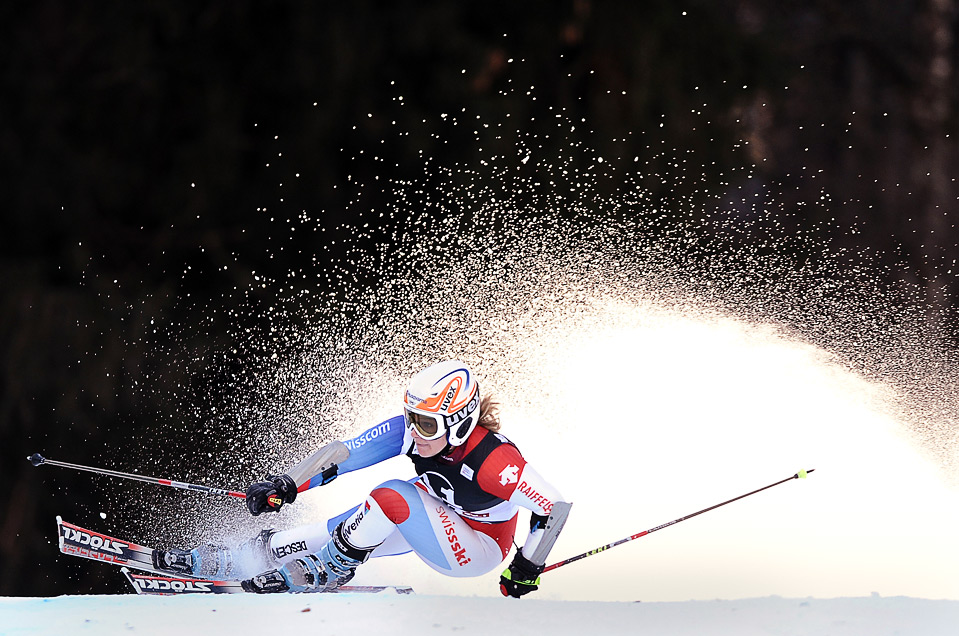 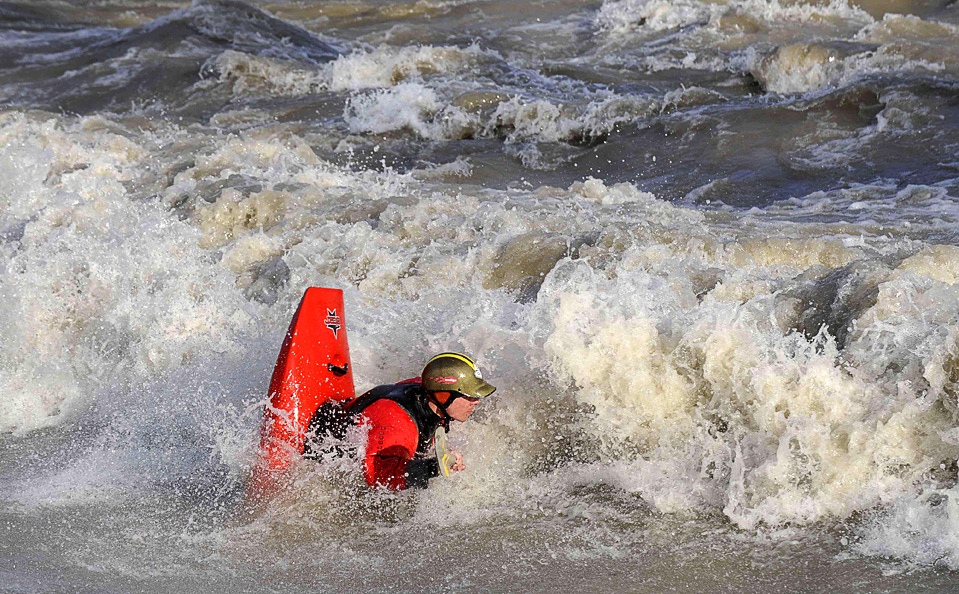 11
A kayaker paddles on the Sora River in Medvode, Slovenia December 26 after heavy rain caused flooding in west and central Slovenia. (REUTERS/Srdjan Zivulovic) # 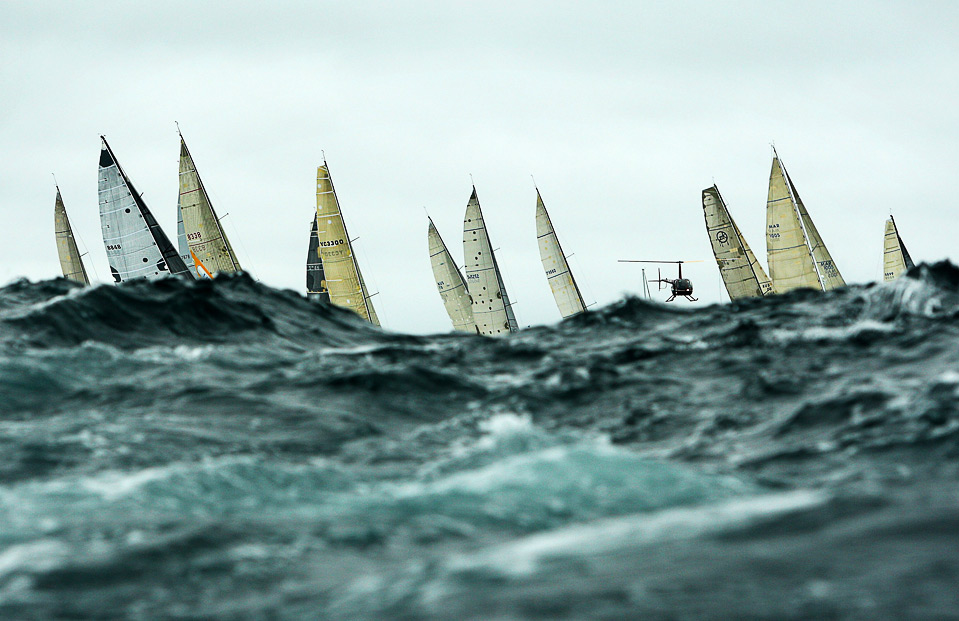 12
Competitors set sail during the start of the 65th Sydney Hobart Yacht Race December 26 in Sydney. A fleet of 100 boats are competing in the 628 nautical mile race to Hobart in Tasmania. (Cameron Spencer/Getty Images) # 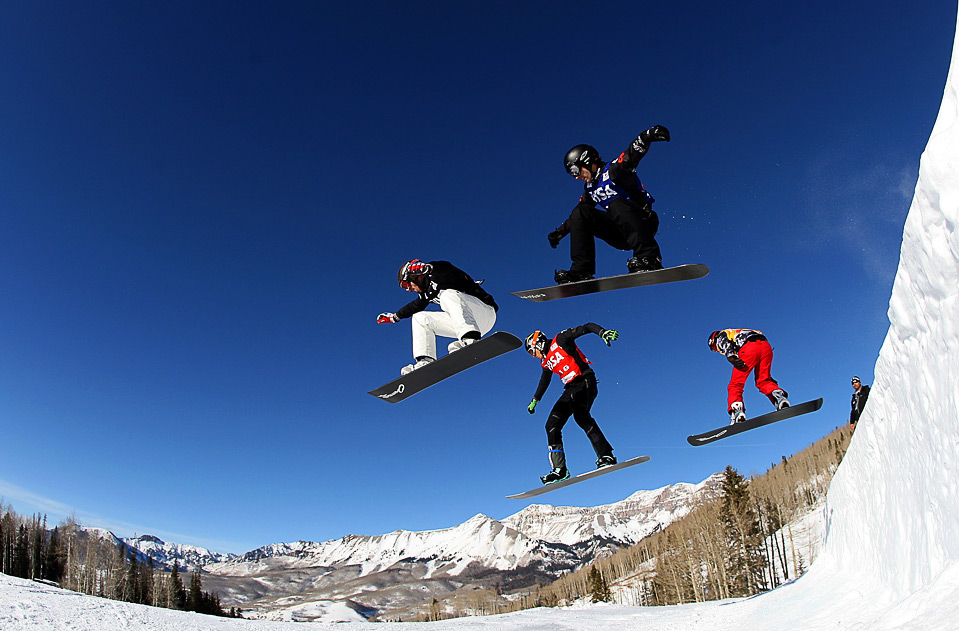 13
Snowboarders race down the track during the finals of the FIS Snowboardcross World Cup 2010 December 19 in Telluride, Colo. (Streeter Lecka/Getty Images) # 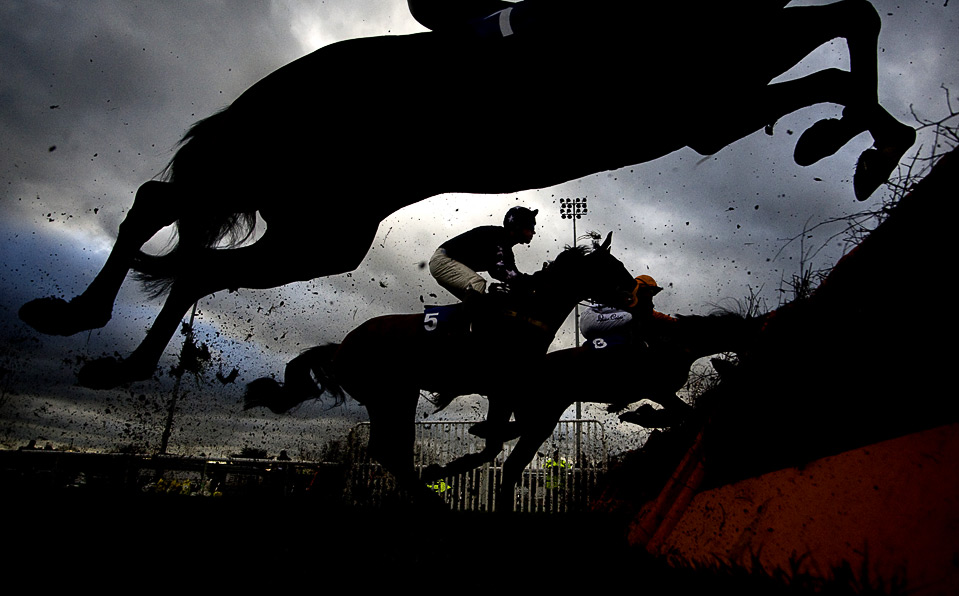 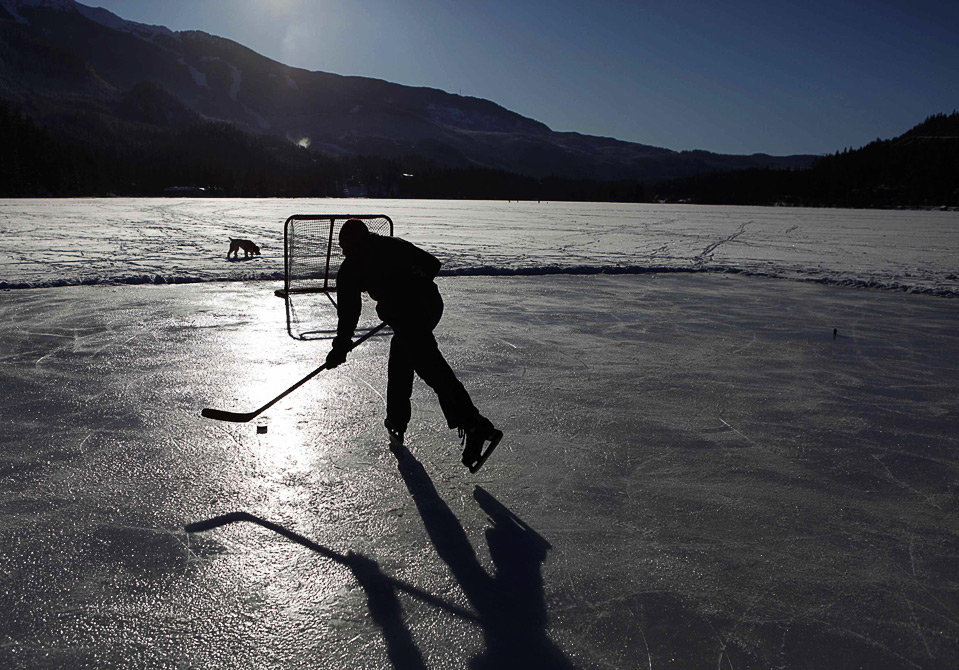 16
Steam rises off the face of the Seattle Seahawks' Brandon Mebane during an NFL football game against the Green Bay Packers December 27 in Green Bay. (AP Photo/Jim Prisching) # 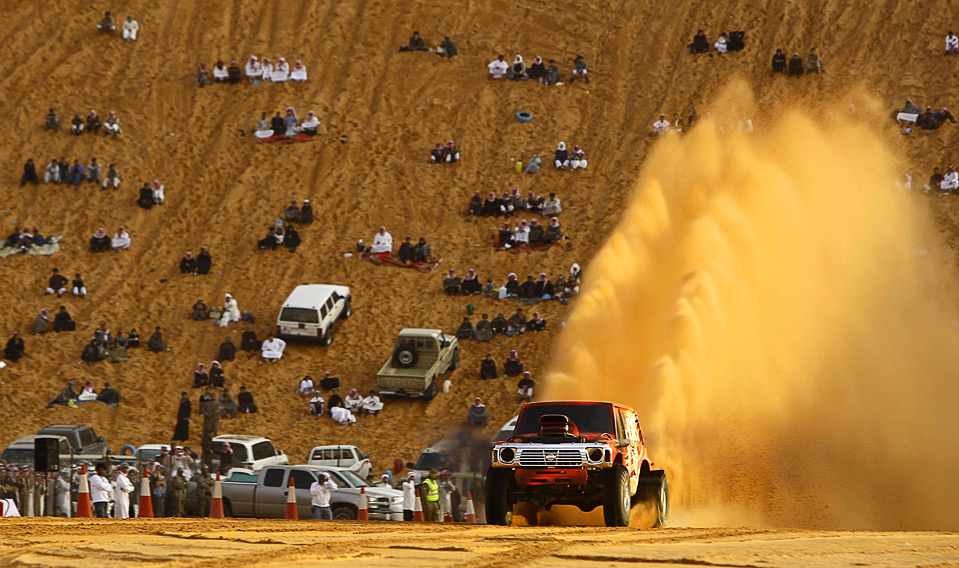 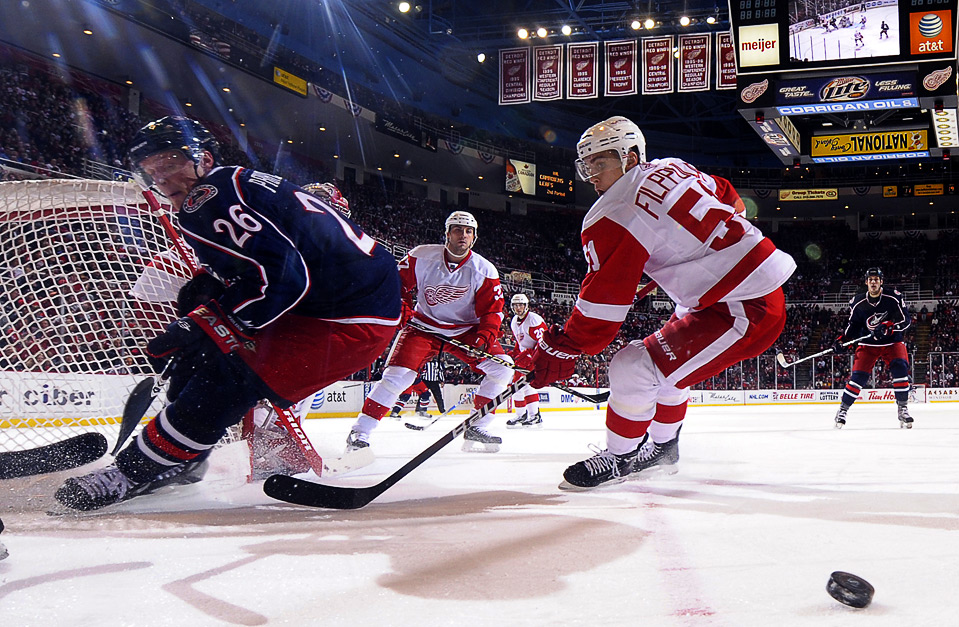 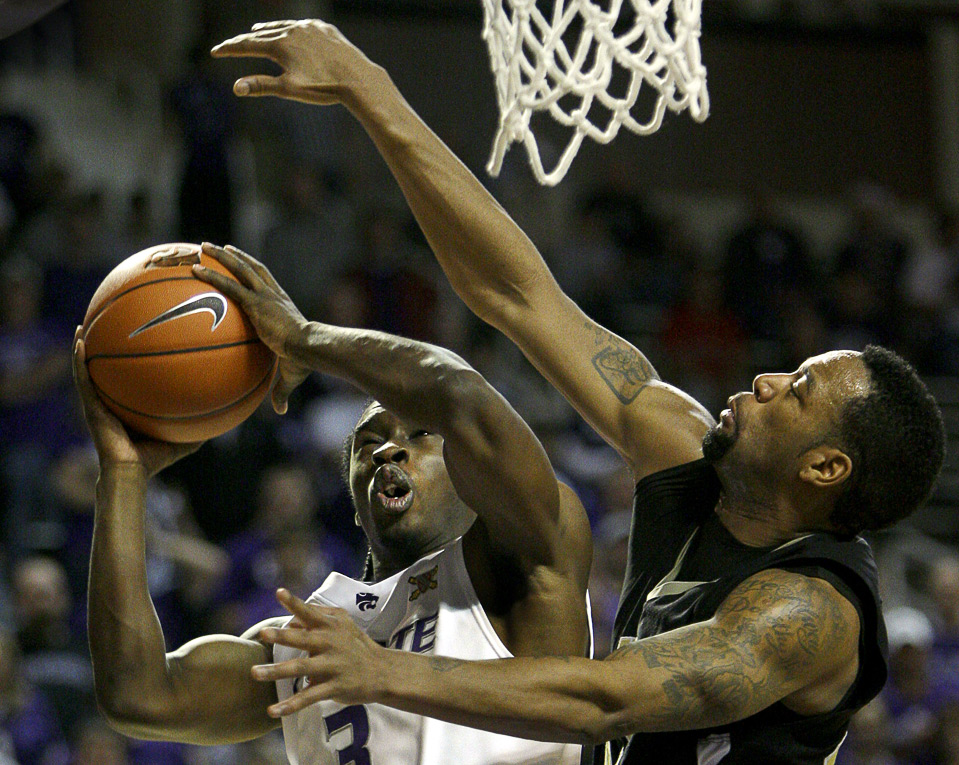 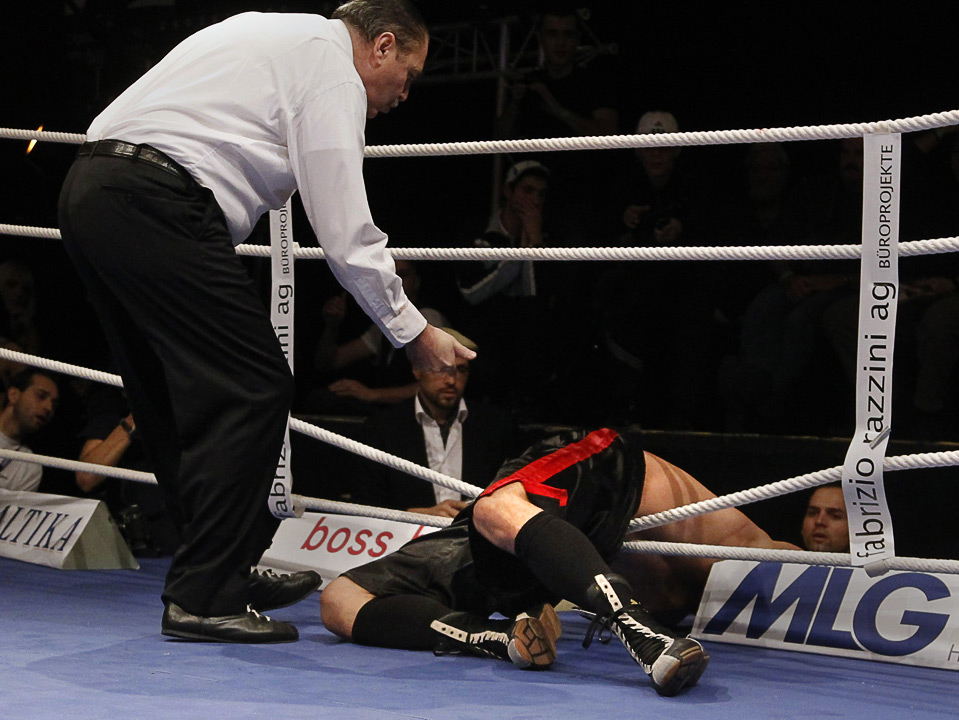 20
The referee counts out Mohamed Belkacem of Switzerland after he was hit by defending champion Magomed Aripgadjiev of Belarus during the European Light Heavyweight Championship EE-EU fight at the Boxing Day in Bern, Switzerland December 26. (AP Photo/Keystone/Peter Klaunzer) # 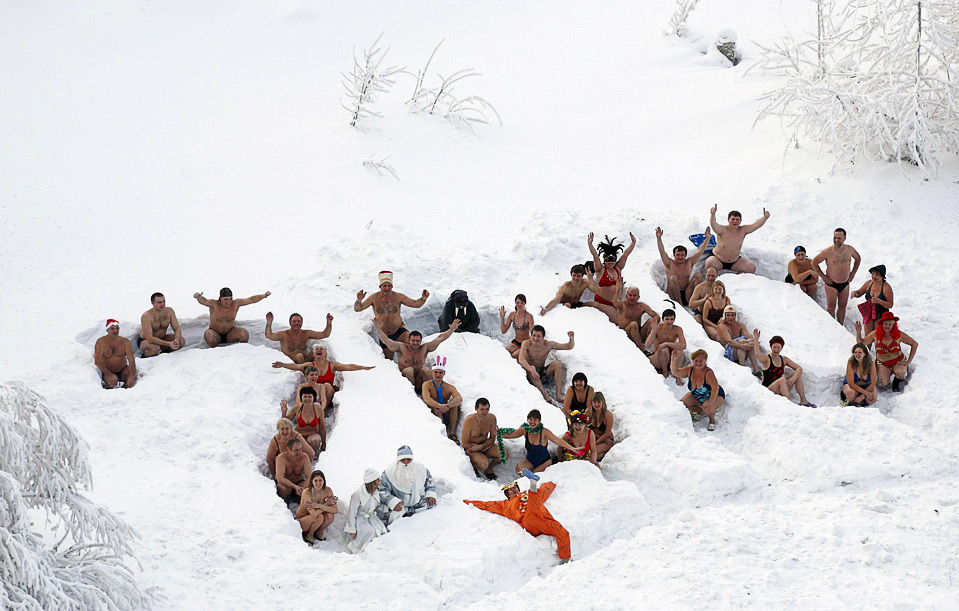 21
Members of a winter swimming club form a 2010 sign in the snow on the bank of the Yenisei River as they celebrate the coming of the new year in Russia's Siberian city of Krasnoyarsk December 27. (REUTERS/Ilya Naymushin) #

More links and information
See more great photography at The Boston Globe's photography home page here -
The Natural World: a weekly full-screen gallery of the best photographs in the world showing nature and the environment -
The best pictures of the week from the photography staff of the Boston Globe -
The Big Picture: news stories in photographs -
Sportsshooter.com, the online resource for sports photography -
ADVERTISEMENT
< Back to front page
recent entries
Advertisement
(only click once)