This week Big Shots travels to Peru for the South American Bodybuilding Championships in Lima, kitesurfs from Tasmania to the Australian mainland, and yells "skate!" at octogenarian hockey players. I'll show you the Peace Marathon in Moscow, World Cup soccer qualifying in Riyadh, and cricket in Colombo, Sri Lanka. There's more, of course, as I look forward to bringing you the third of cycling's grand tours, La Vuelta a Espana early next week. ( 30 photos total) 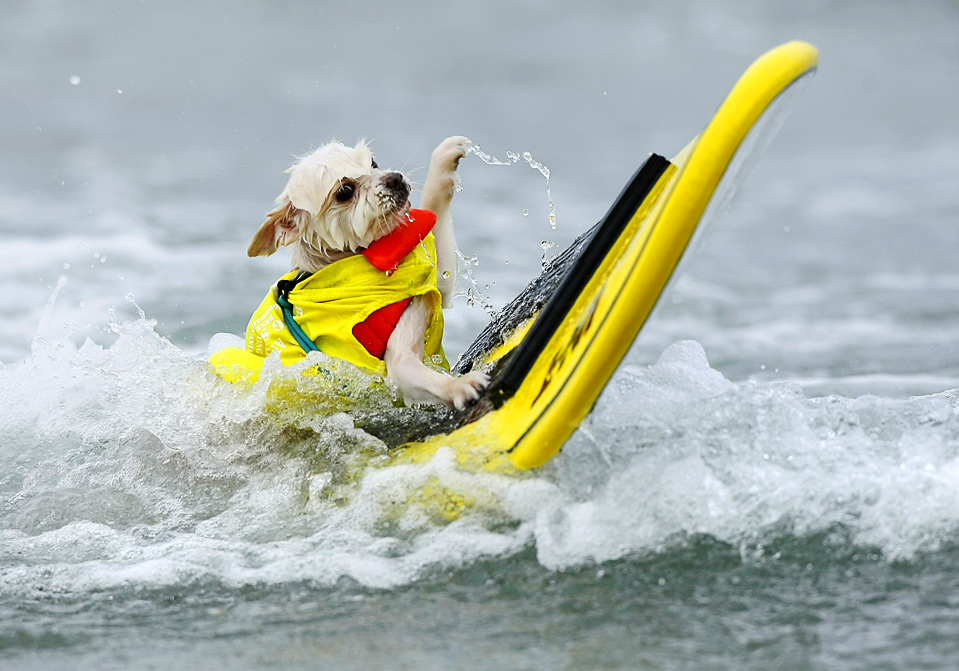 A six-year old Pomeranian named Bobby Gorgeous hangs on to the surfboard as he competes in his 20lbs and under heat at the 4th annual Helen Woodward Animal Center "Surf Dog Surf-A-Thon" in Del Mar, Calif. September 13. (REUTERS/Mike Blake) 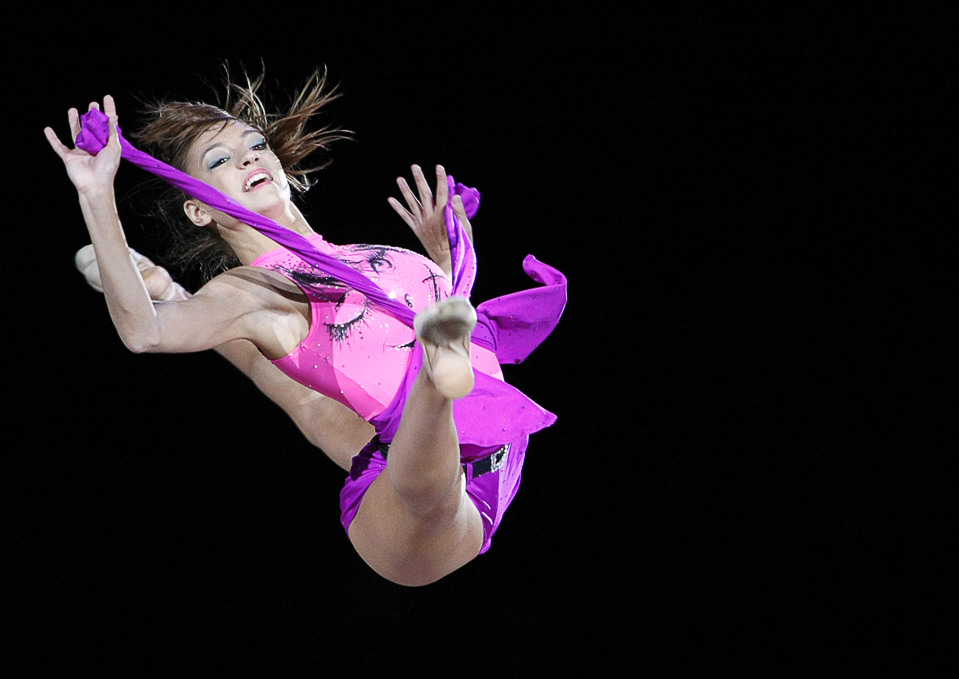 2
Evgenia Kanaeva of Russia performs during an exhibition at the Rhythmic Gymnastics World Championships in Ise, Japan September 13. (REUTERS/Issei Kato) # 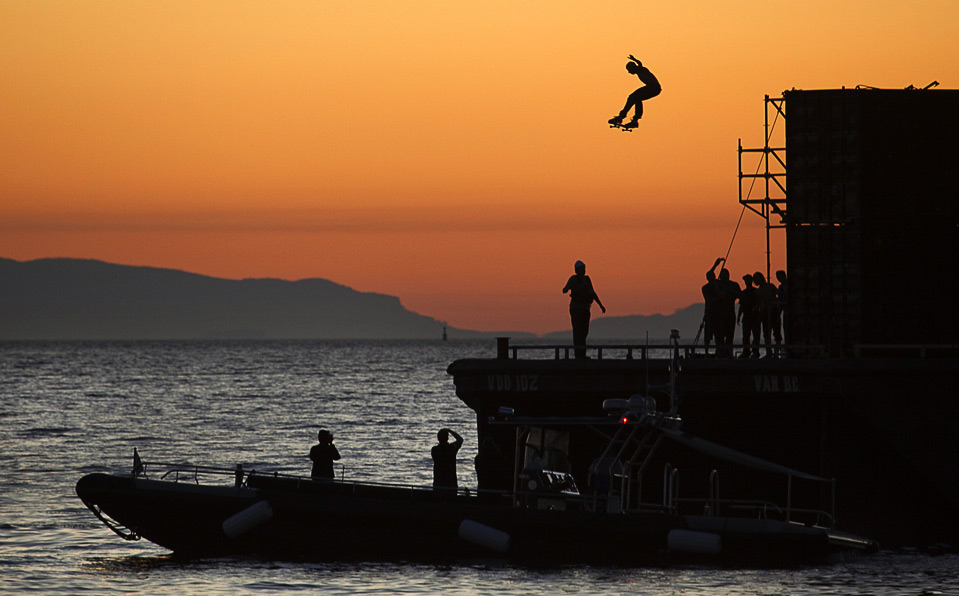 3
Skateboarder Ryan Decenzo jumps from a shipping container aboard a barge into the waters of English Bay at sunset in Vancouver September 11. (REUTERS/Andy Clark) # 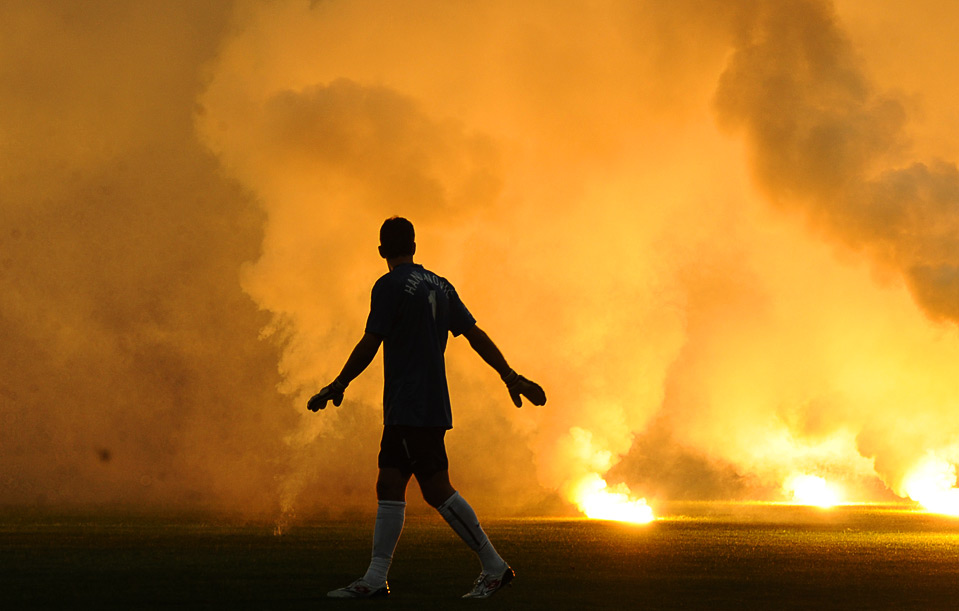 4
A Polish player is silhouetted by torches thrown by Slovenian supporters onto the pitch during the World Cup 2010 qualifying soccer match between Slovenia and Poland in Maribor, Slovenia September 9. (HRVOJE POLAN/AFP/Getty Images) # 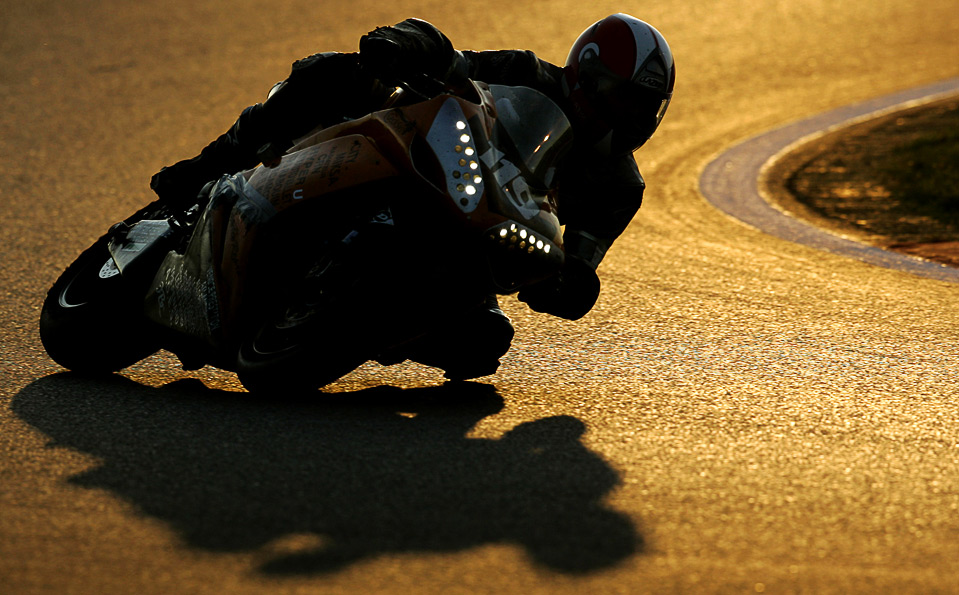 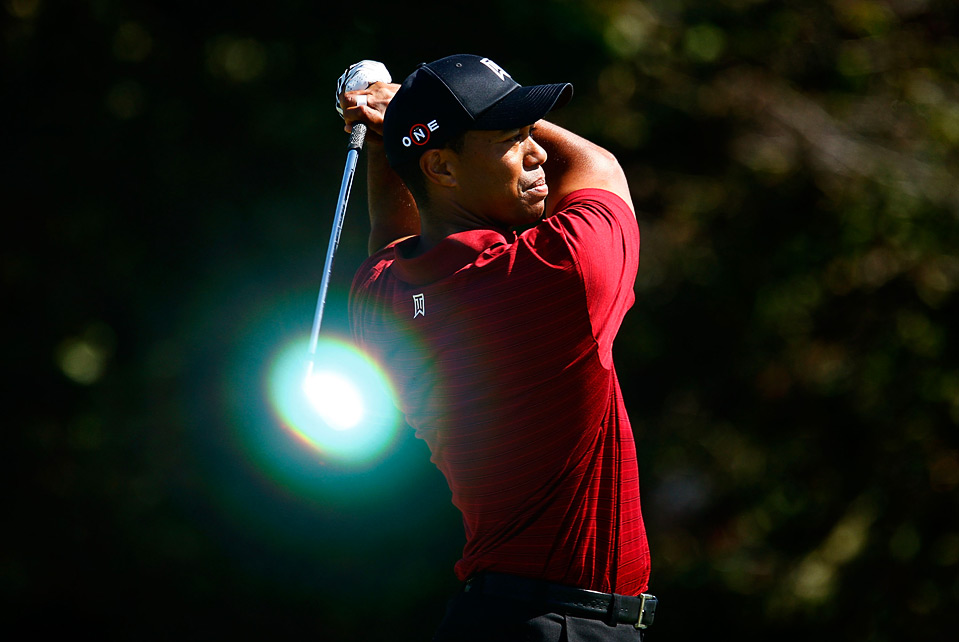 6
Sunlight on his club head creates a burst of lens flare as Tiger Woods watches his tee shot on the eighth hole during the final round of the BMW Championship held at Cog Hill Golf & CC September 13 in Lemont, Ill. (Scott Halleran/Getty Images) # 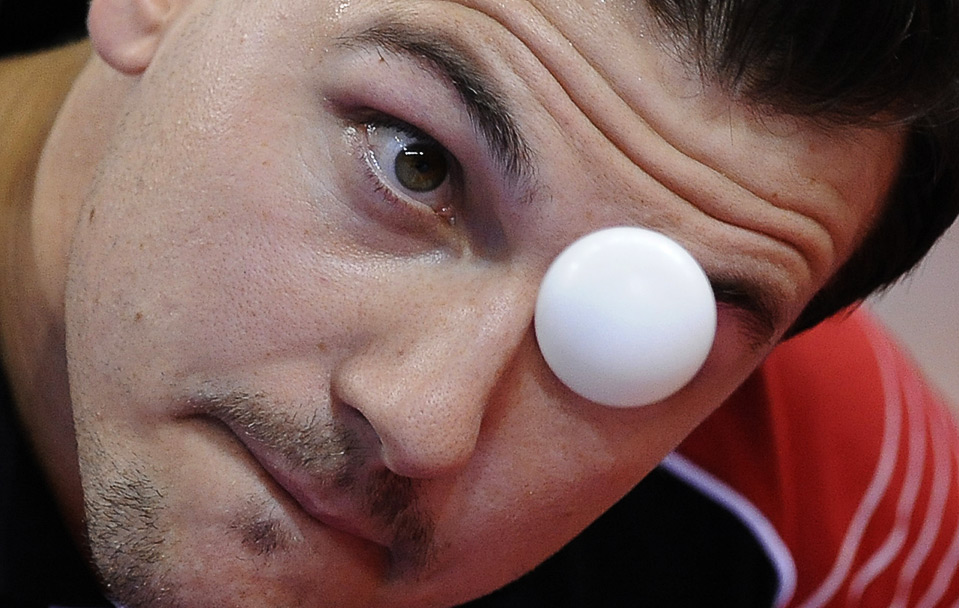 7
German table tennis player Timo Boll focuses on the ball as he serves in his semifinal match against Romania during the Table Tennis European Championships in Stuttgart September 15. (AP Photo/Daniel Maurer) # 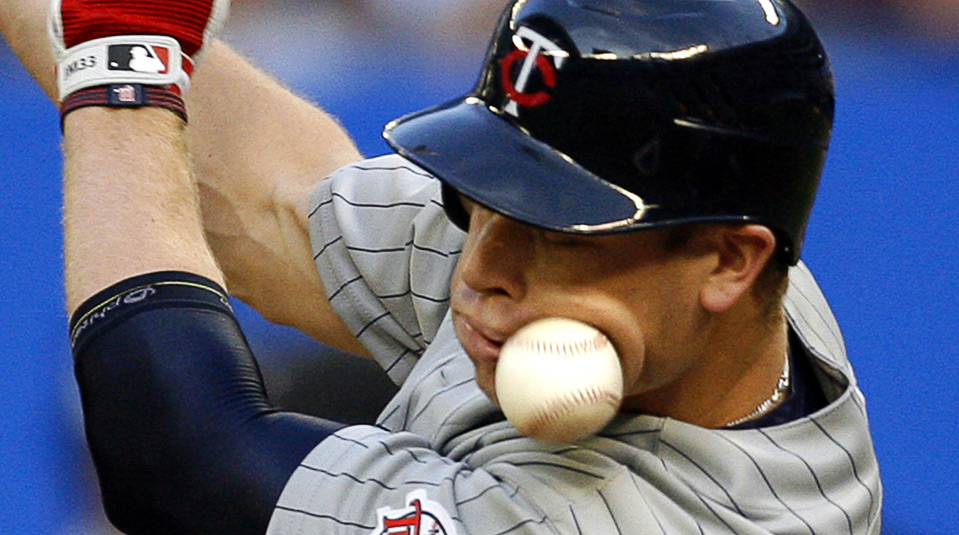 8
The Minnesota Twins' Justin Morneau fouls a ball off his cheek during an MLB baseball game against the Toronto Blue Jays in Toronto September 9. (REUTERS/ Mike Cassese) # 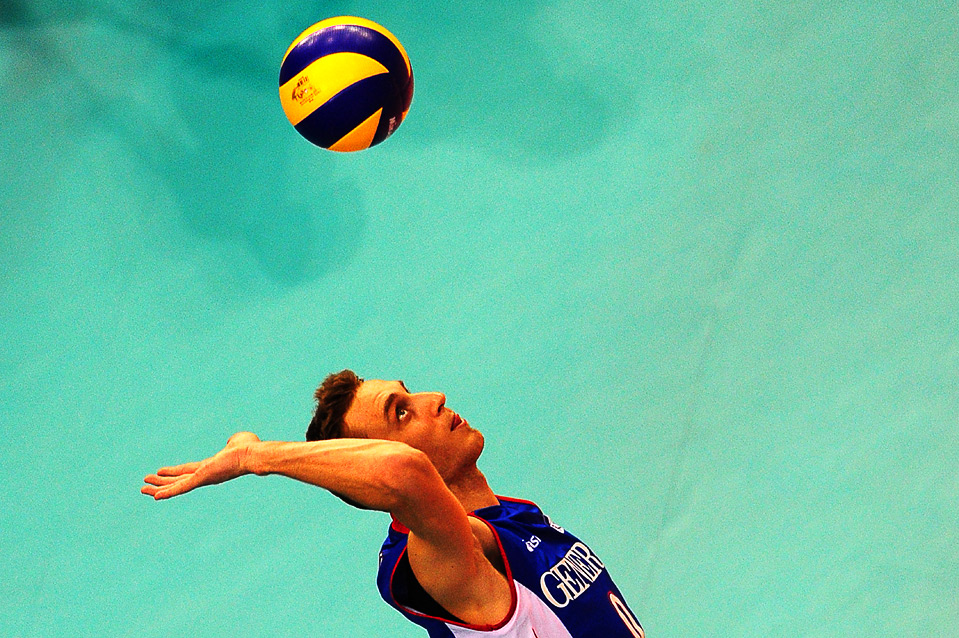 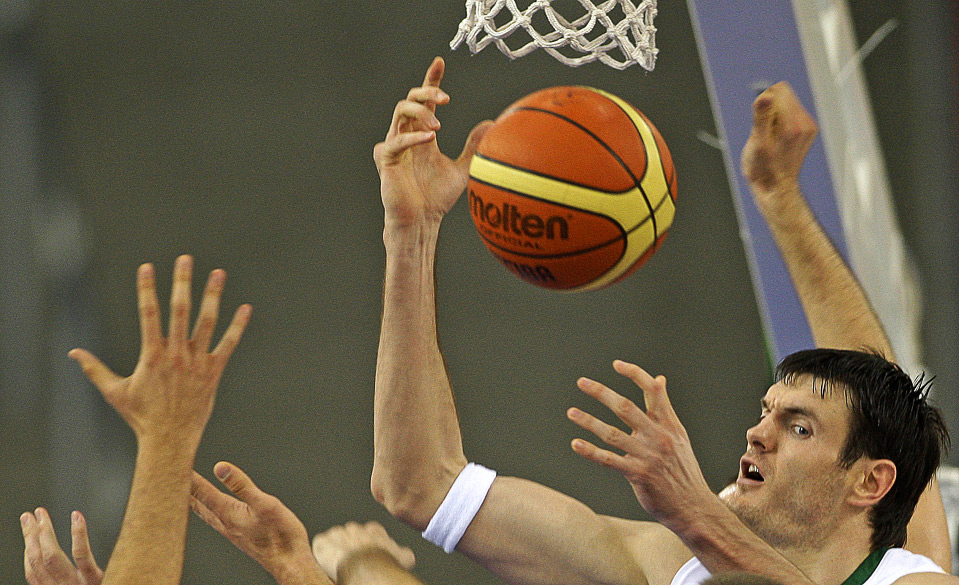 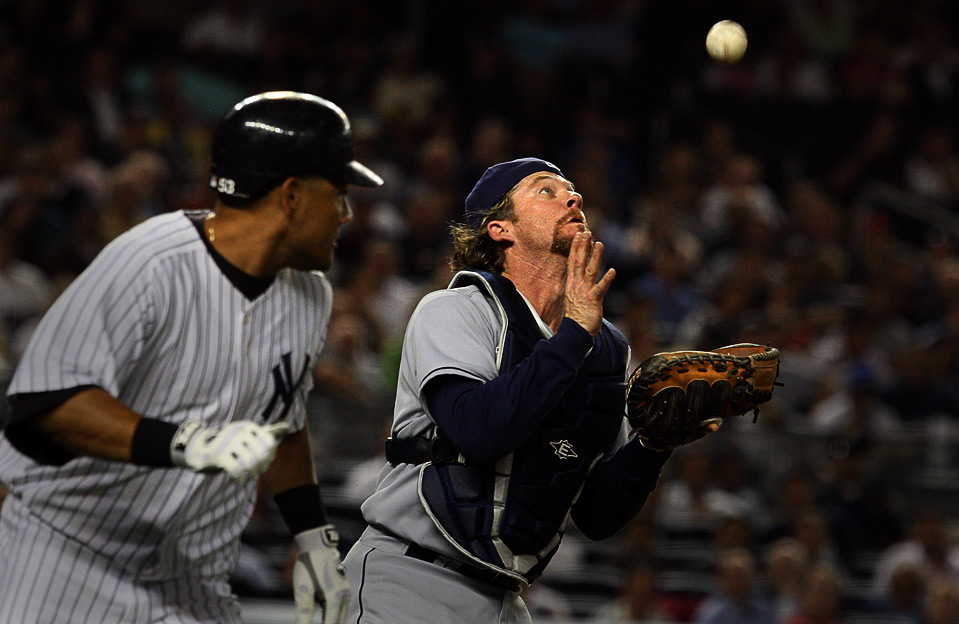 11
Gregg Zaun of the Tampa Bay Rays catches a pop up from Melky Cabrera of the New York Yankees September 8 at Yankee Stadium in the Bronx. (Jim McIsaac/Getty Images) # 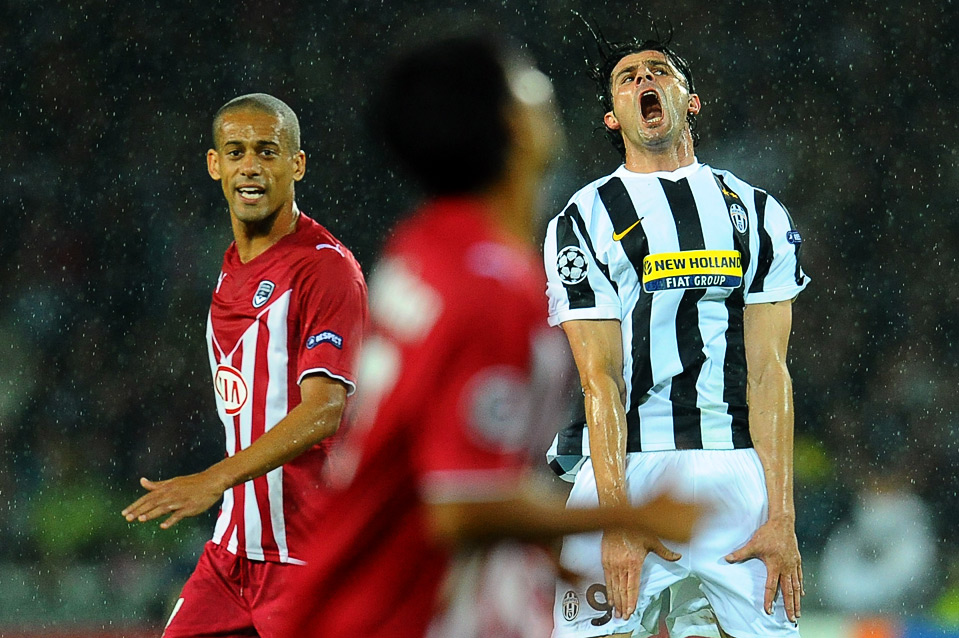 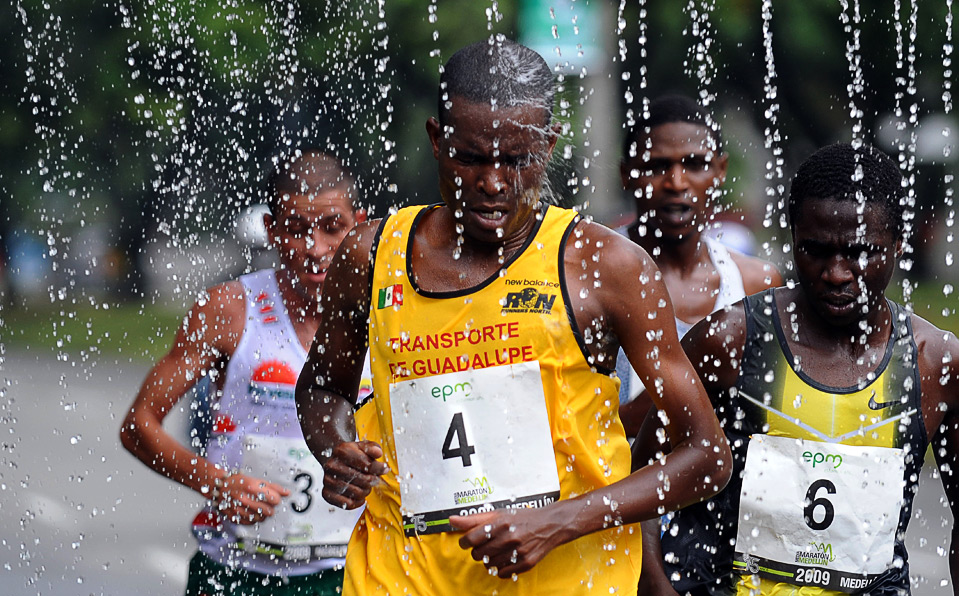 13
Runners are cooled with water during the 15th edition of Medellin's International Half Marathon September 13 in Medellin, Colombia. (RAUL ARBOLEDA/AFP/Getty Images) # 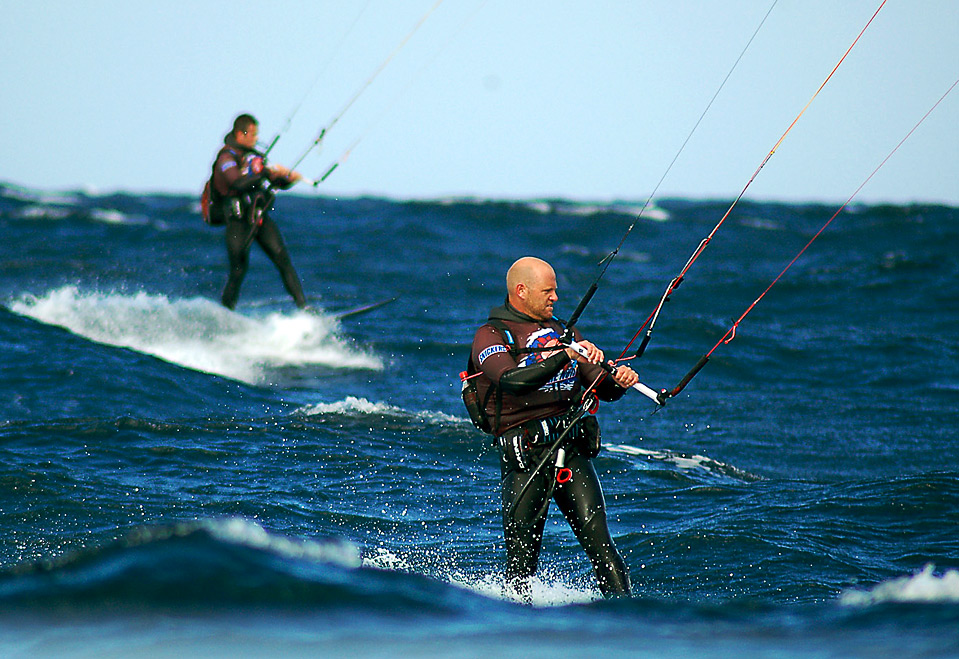 14
Australian dare-devils Ben Morrison-Jack (right) and James Weight on their way to claiming a world first by kite-surfing across the notoriously stormy waters of Bass Strait from Tasmania to mainland Australia September 9. The friends braved giant swells on their 12-hour journey across the 259 kilometer stretch of treacherous water before swimming the final kilometer to Apollo Bay. (NALU PRODUCTIONS/AFP/Getty Images) # 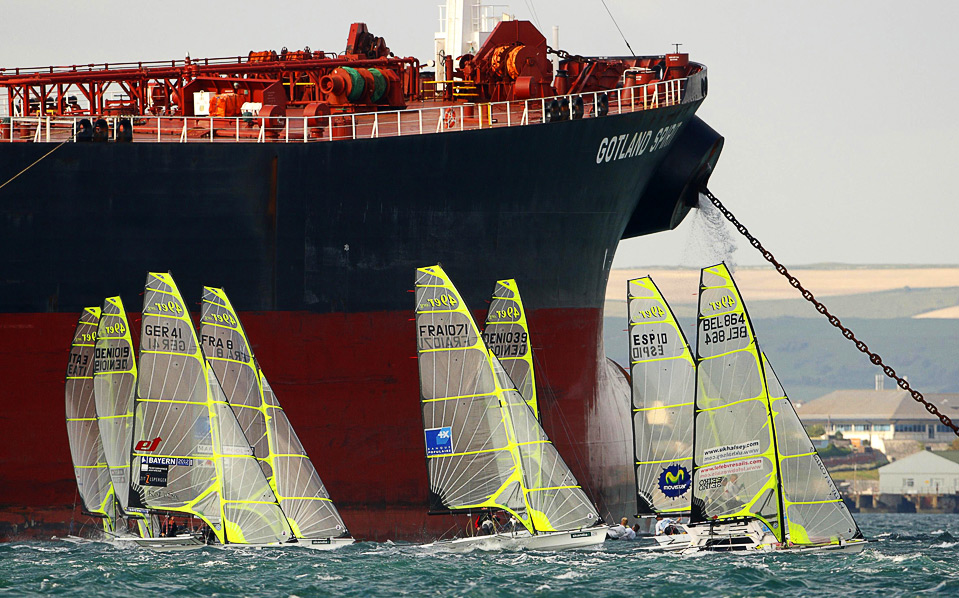 15
The 49er fleet passes a tanker moored in Portland Harbour during the Skandia Sail for Gold Regatta off the coast of Weymouth, England September 16. (AP Photo/PA, Chris Ison) # 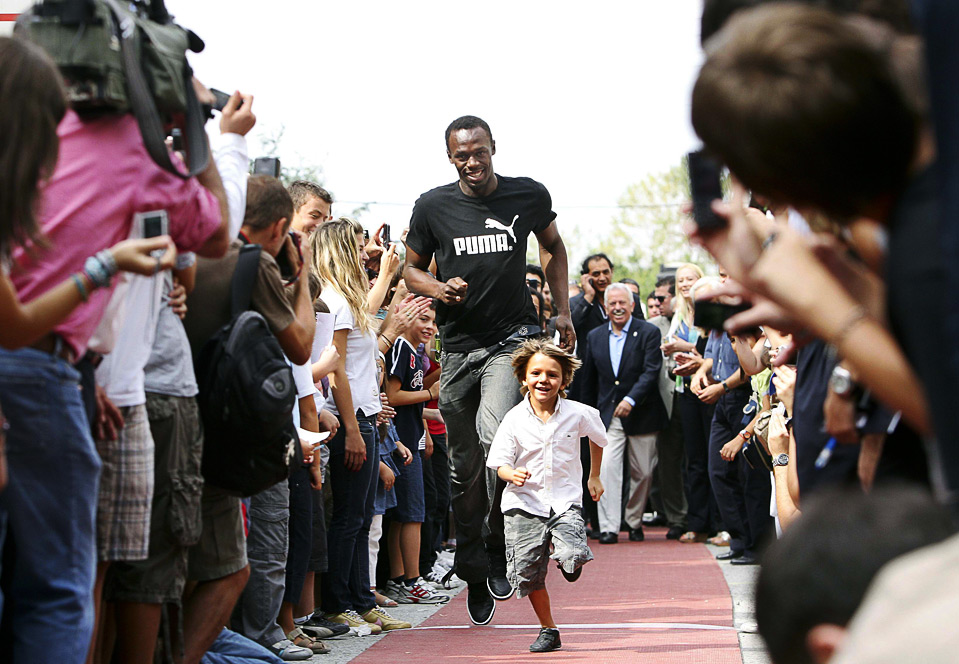 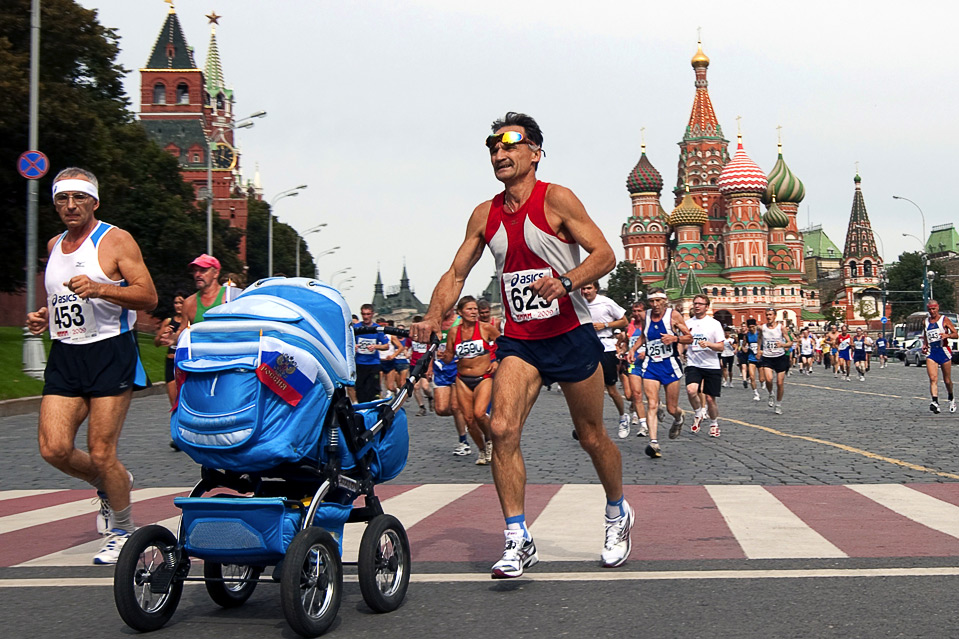 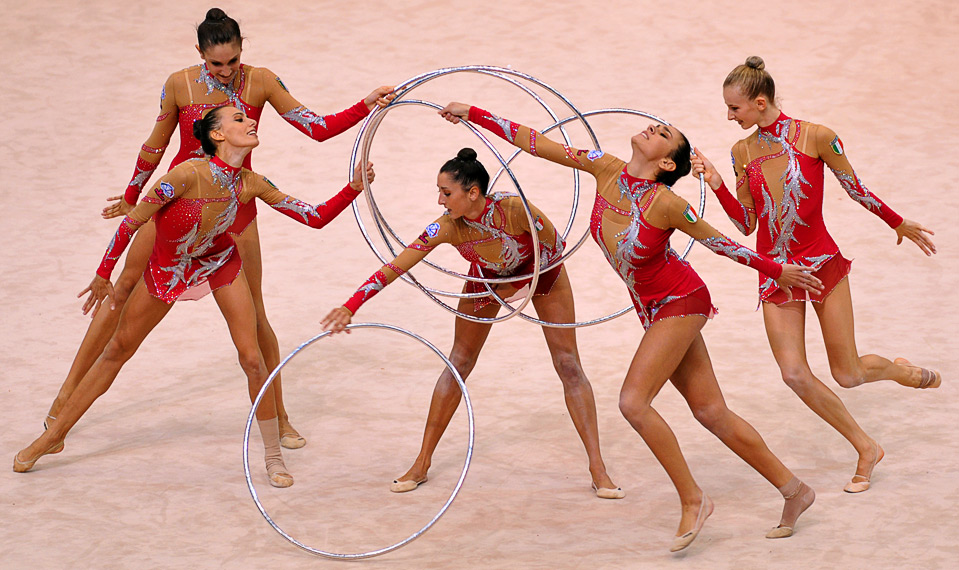 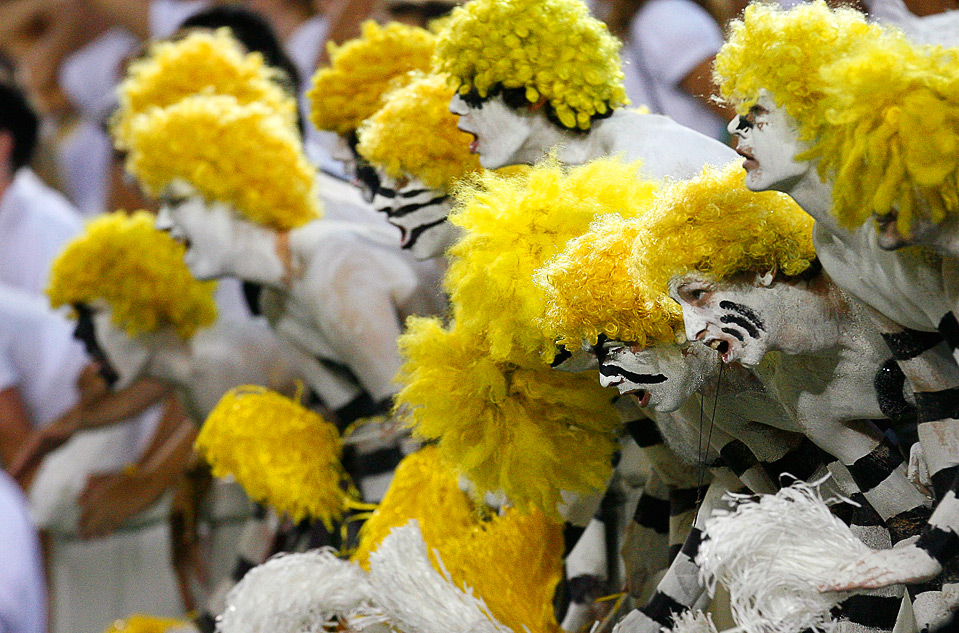 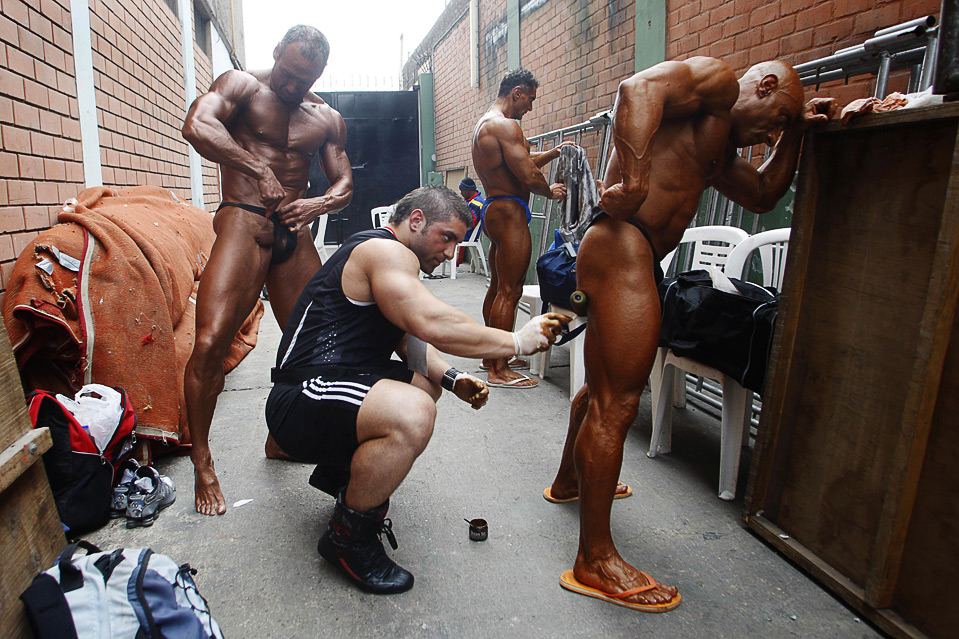 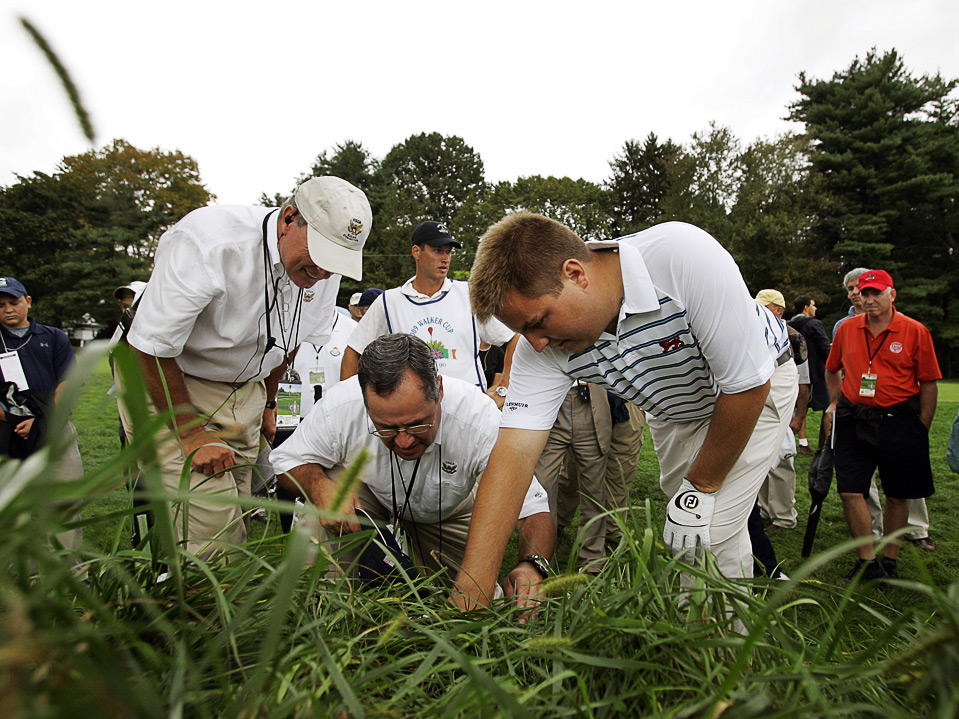 21
Rules officials Jeff Hall (left) and Jim Hyler (center) help Gavin Dear of Scotland after his ball landed in tall grass on the fifth hole during a pairs round of the Walker Cup September 12 at the Merion Golf Club in Ardmore, Pa. (AP Photo/Mel Evans) # 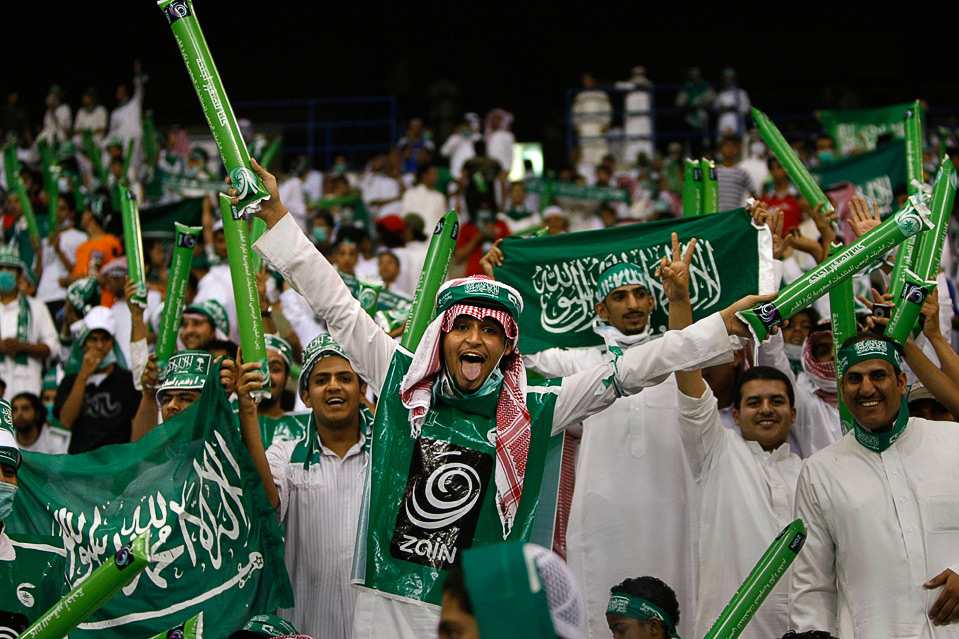 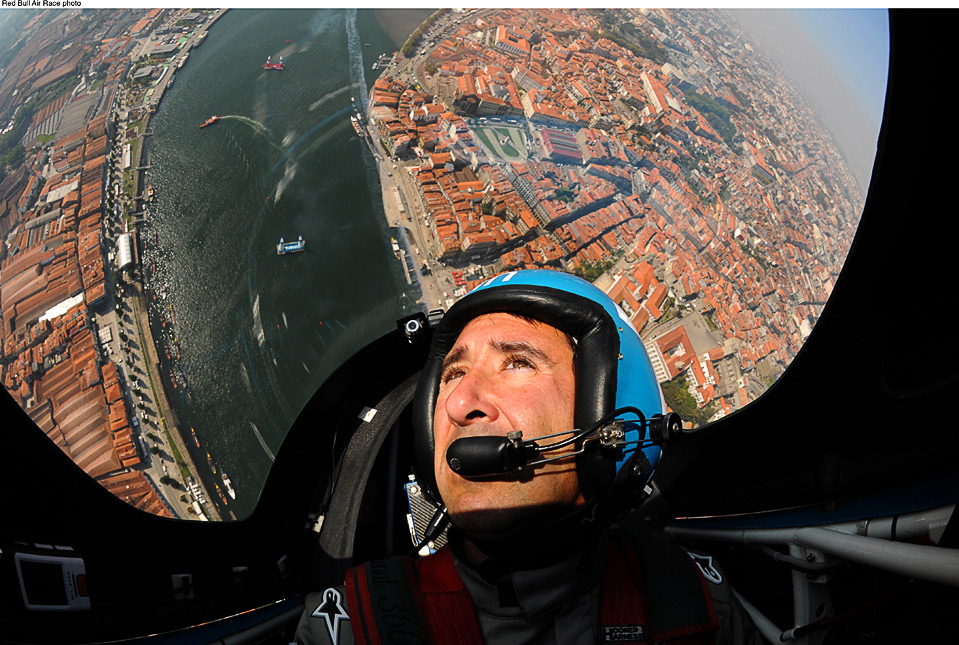 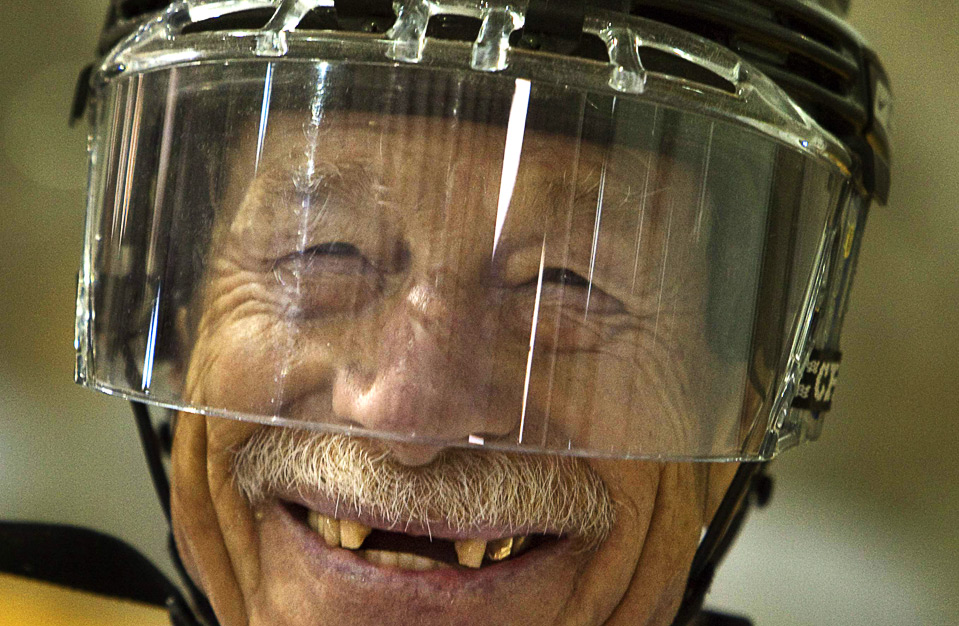 24
Art Horowitz, 79, smiles while taking part in a geriatric hockey tournament in Burnaby, British Columbia September 8. Horowitz, who is from Scottsdale, Ariz., came to take part in the tournament that involves players 75 years and older. (REUTERS/Andy Clark) # 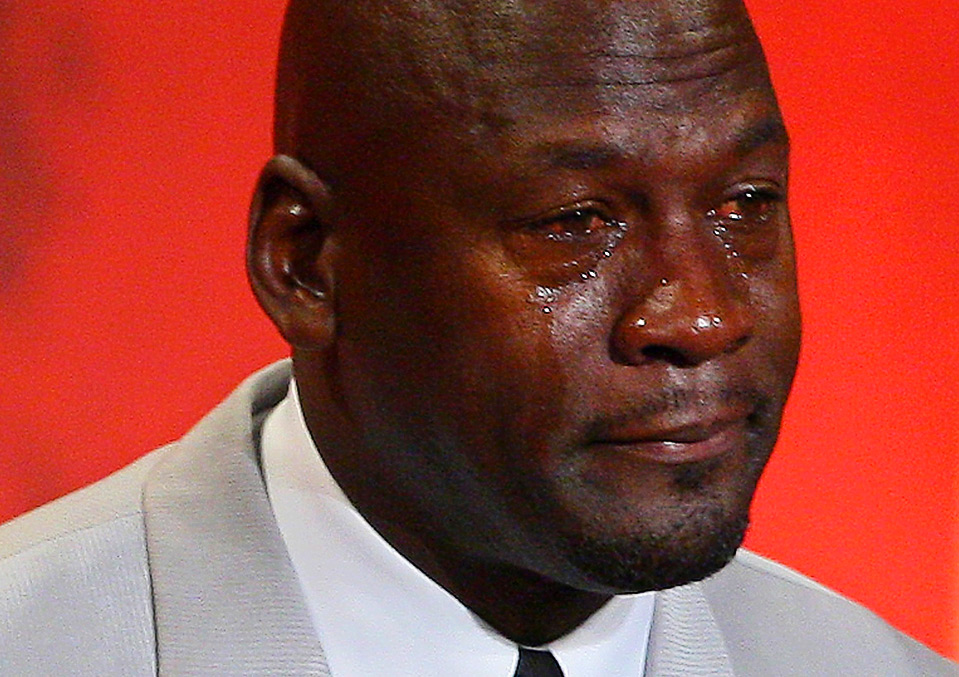 25
Former Chicago Bulls and Washington Wizards player Michael Jordan cries as he takes the podium during his enshrinement ceremony into the Naismith Basketball Hall of Fame in Springfield, Mass. September 11. (AP Photo/Stephan Savoia) # 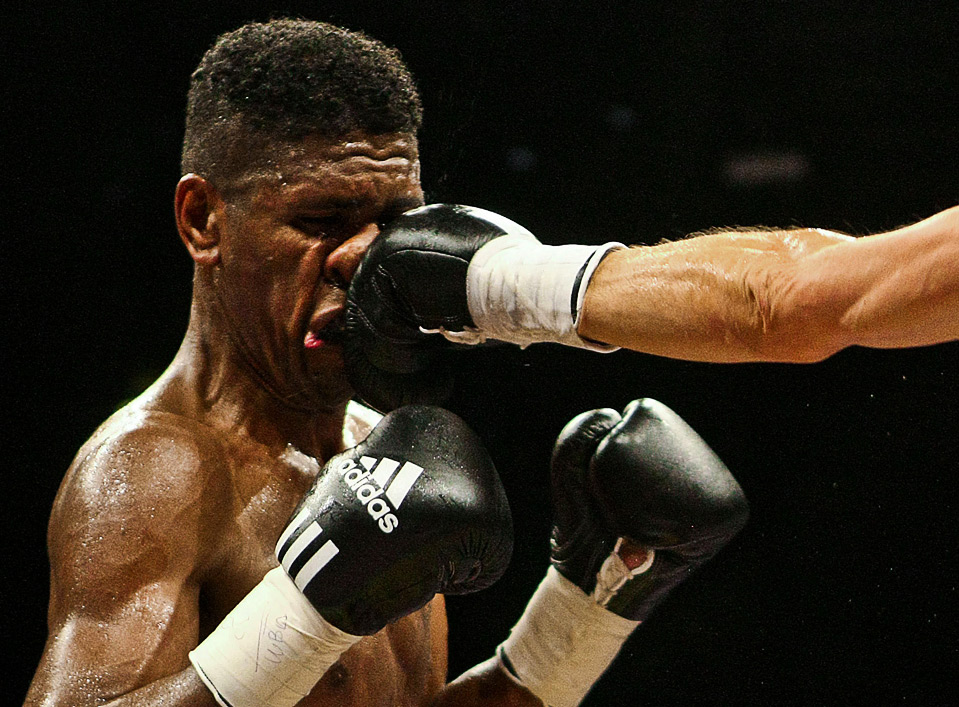 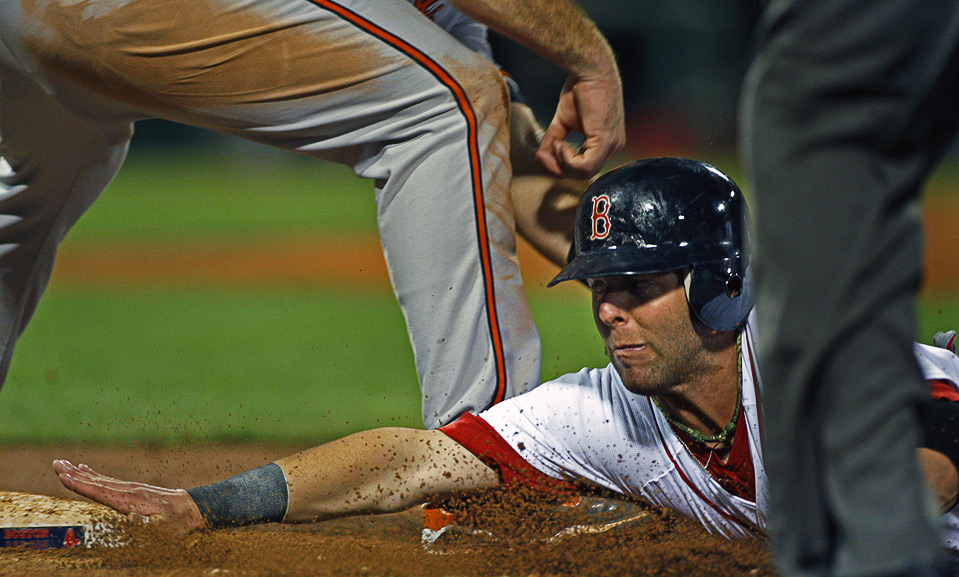 28
The Boston Red Sox' Dustin Pedroia just beats a pickoff throw to first base in an MLB baseball game against the Baltimore Orioles September 9 at Fenway Park in Boston. (Jim Davis/Globe Staff) # 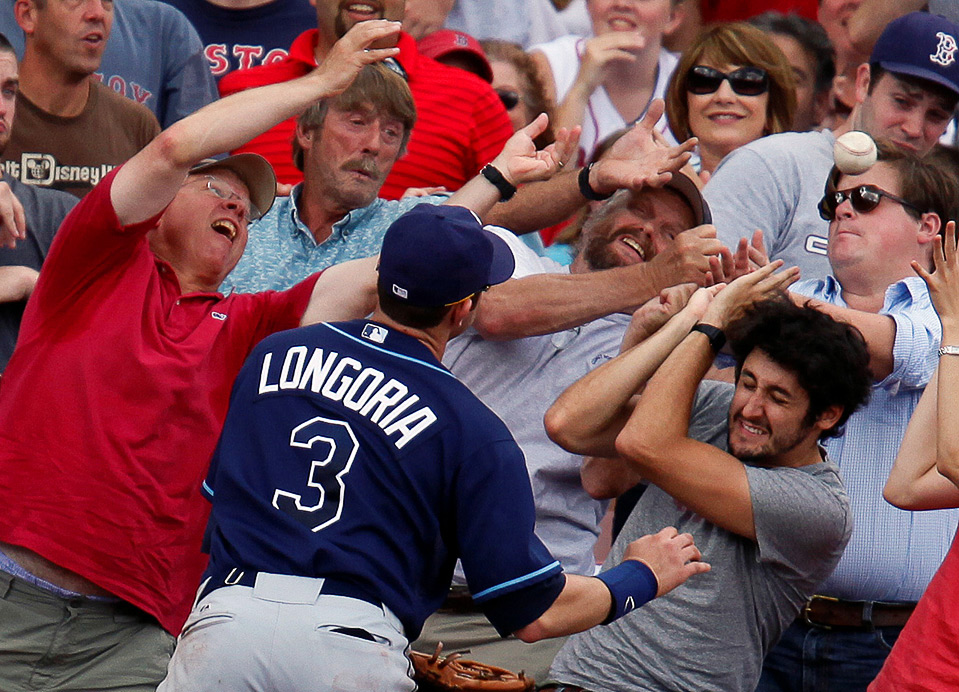 29
The Tampa Bay Rays' Evan Longoria cannot reach a foul ball in the stands during an MLB baseball game against the Boston Red Sox September 13 in Fenway Park in Boston. (AP Photo/Michael Dwyer) # 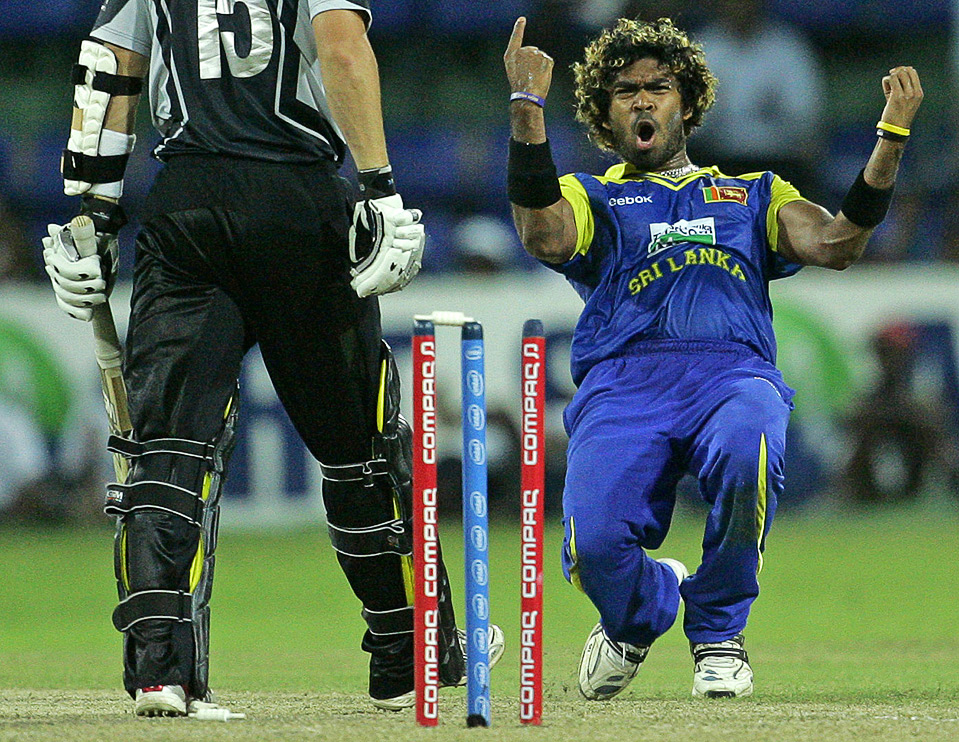 btw, the caption on #4 is wrong, it's actually Slovenia's keeper Samir Handanovic (you can see his name), not Arturt Boruc.

Pretty sure that's Samir Handanovič of Slovenia in picture #4, not Artur Boruc. It could be because of the name on the back of his jersey... I don't know... I'm not a doctor.

tHESE PICTURES ARE GREAT!!!

The first picture is actually of a dog surfers use as a decoy for sharks. Sort of like the canary in the coal mine for surfer dudes.

he does not look like micheal jordan at all.

I'm pretty sure Artur Boruc is about double the weight and blond...

To address questions of the use of Photoshop that occasionally are raised here, allow me to explain our policy. We use Photoshop to process all photographs in the Boston Globe and on Boston.com, including all of those featured in this blog. So in a sense, all the photographs are "Photoshopped". But what that actually means versus what is implied by Joe in comment #4 is very different. In preparing images for this blog, I use Photoshop to: crop, color-correct, and density-correct as well as to do minor dodging and burning as would be done in a traditional darkroom, do minor sharpening, and remove dust spots that appear on a camera's capture plate and are not a part of the original scene. Nothing else is done to photographs that appear in this blog or in any other space in the Boston Globe or on Boston.com. The images that wire services transmit are vetted by editors, and photographers who violate journalism ethics are usually terminated quickly in the rare instances when this occurs. Whenever I come across a photograph that appears questionable, I do not publish it.


Posted by Aianz September 6, 10 03:28 AM
recent entries
Advertisement
(only click once)