Michael Phelps, the Red Sox, the Dauphine Libere and more

Among the many stops on our constant world tour, Big Shots travels this week to Soweto, South Africa for the FIFA Confederations Cup soccer tournament. We stay in the Southern Hemisphere to check out the world's largest surfboard in Serra, Brazil. Then it's on to France for the 24 hours of Le Mans and the mountain passes of the Dauphine Libere cycling race in Briancon. And it doesn't end there. Later this week, Big Shots looks at the NBA basketball playoffs. ( 30 photos total)

Getting their game face on, quite literally, are (left to right) a South African soccer fan at the opening ceremony of the FIFA Confederations Cup in Johannesburg June 14, a Columbian soccer fan during a World Cup 2010 qualifying game against Peru in Medellin June 10, and David Williams of the Sea Eagles before a rugby match between the Penrith Panthers and the Manly Warringah Sea Eagles June 13 in Sydney. (ALEXANDER JOE/AFP/Getty Images) (AP Photo/Luis Benavides) (Matt King/Getty Images) 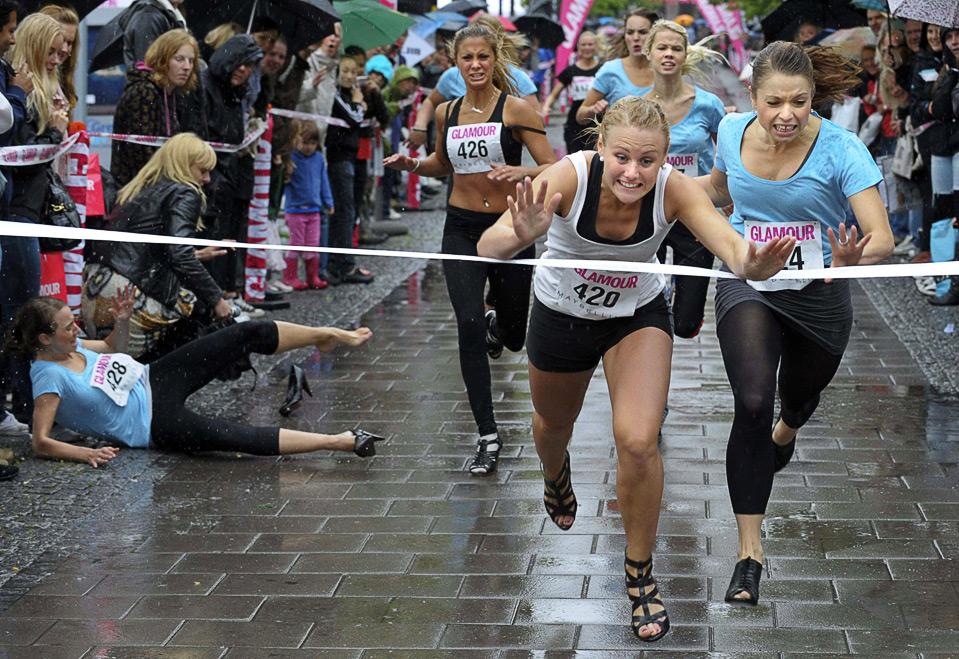 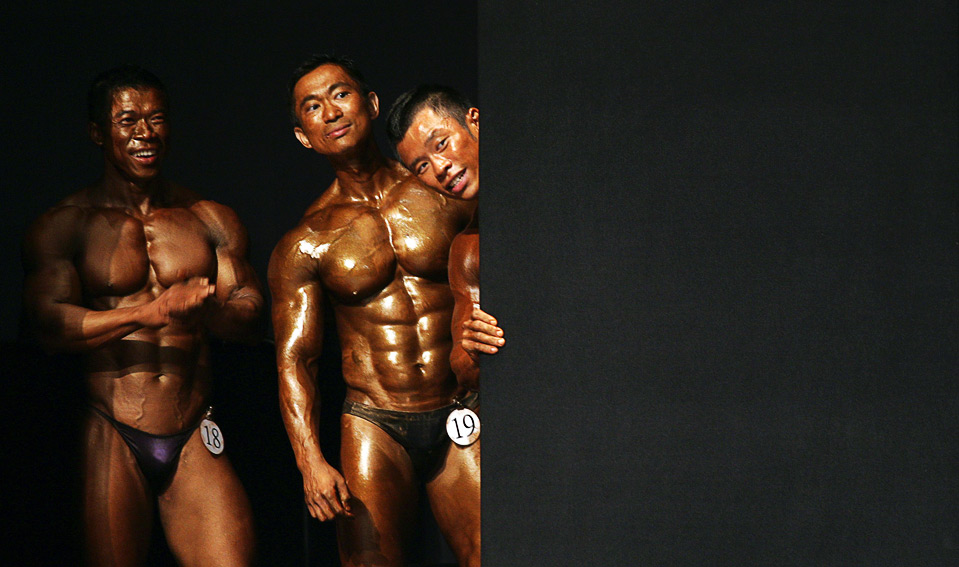 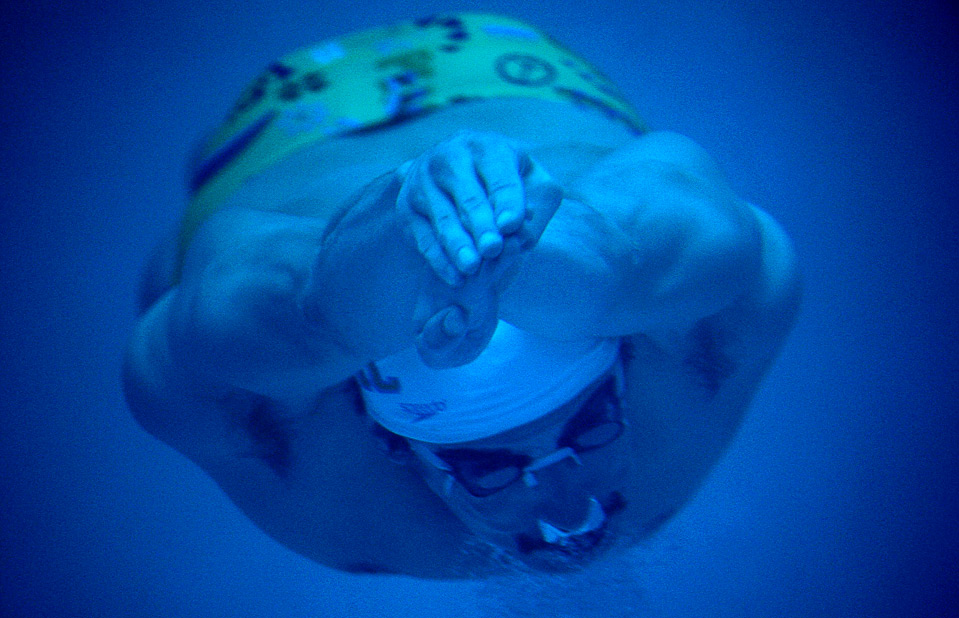 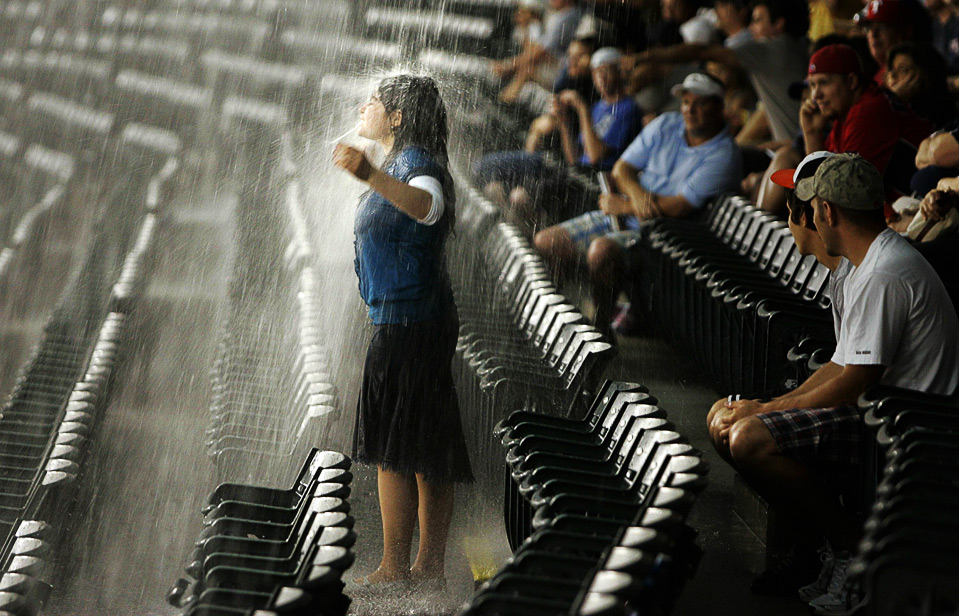 5
A girl luxuriates in water pouring down from an upper balcony during a rain delay before the start of MLB baseball action between the Texas Rangers and Toronto Blue Jays in Arlington, Texas June 10. (REUTERS/Jessica Rinaldi) # 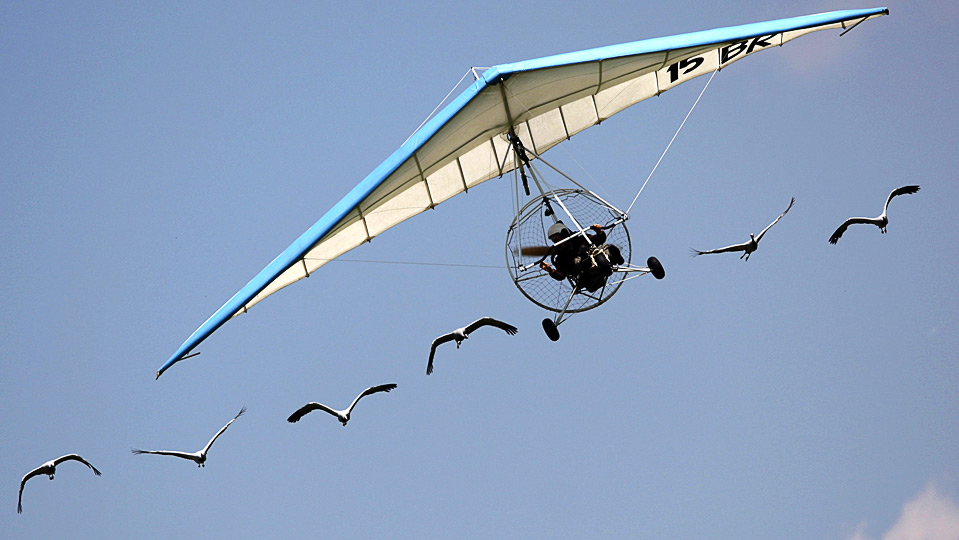 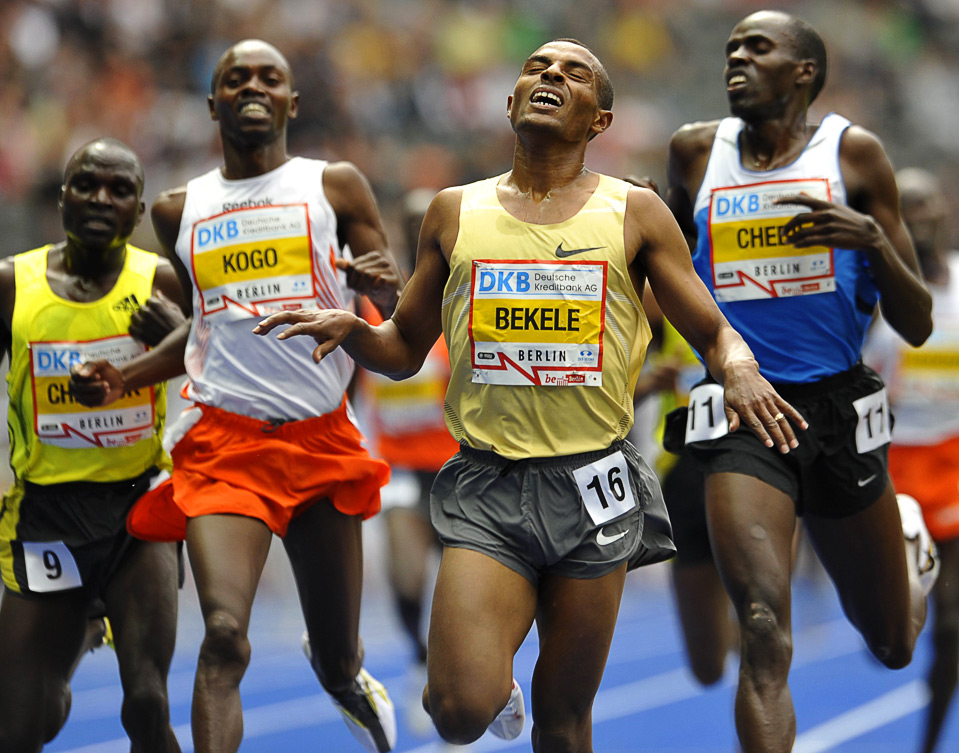 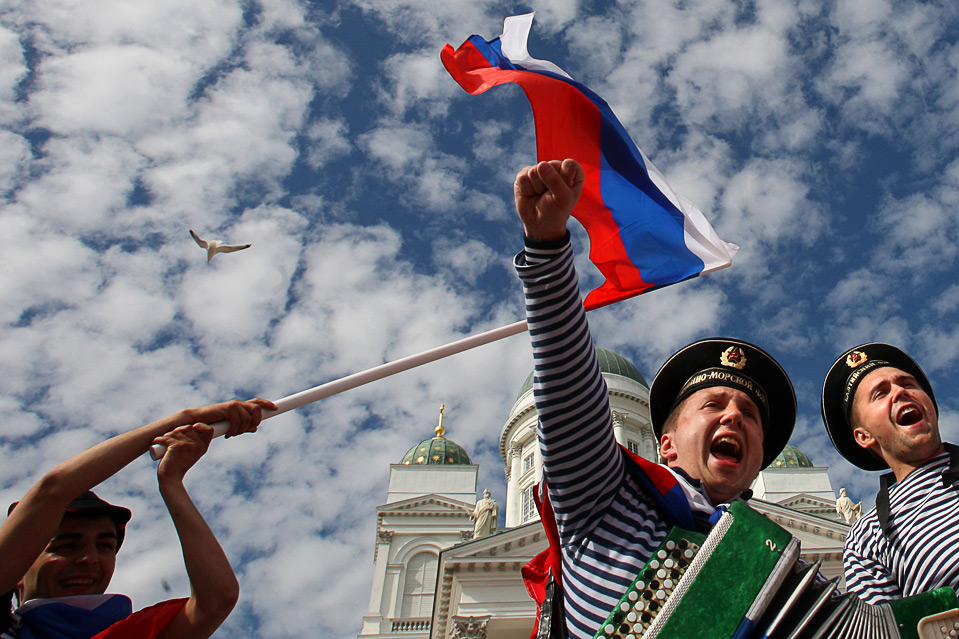 9
Russian fans sing in the streets of Helsinki before the World Cup 2010 qualifying soccer match between Finland and Russia June 10 at the Olympic Stadium in Helsinki. (KIRILL KUDRYAVTSEV/AFP/Getty Images) # 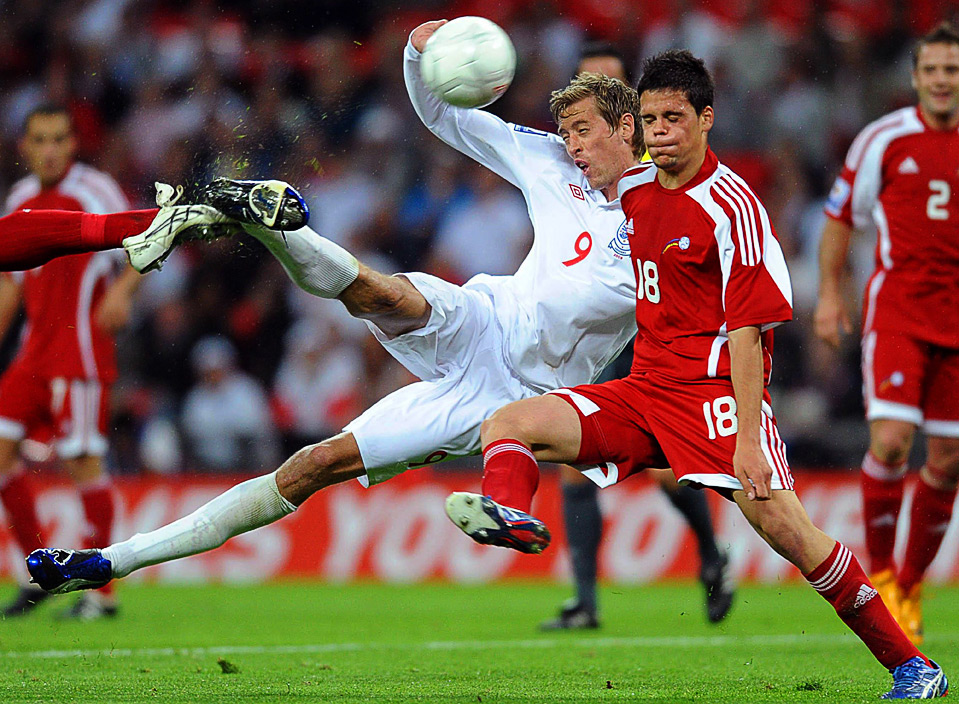 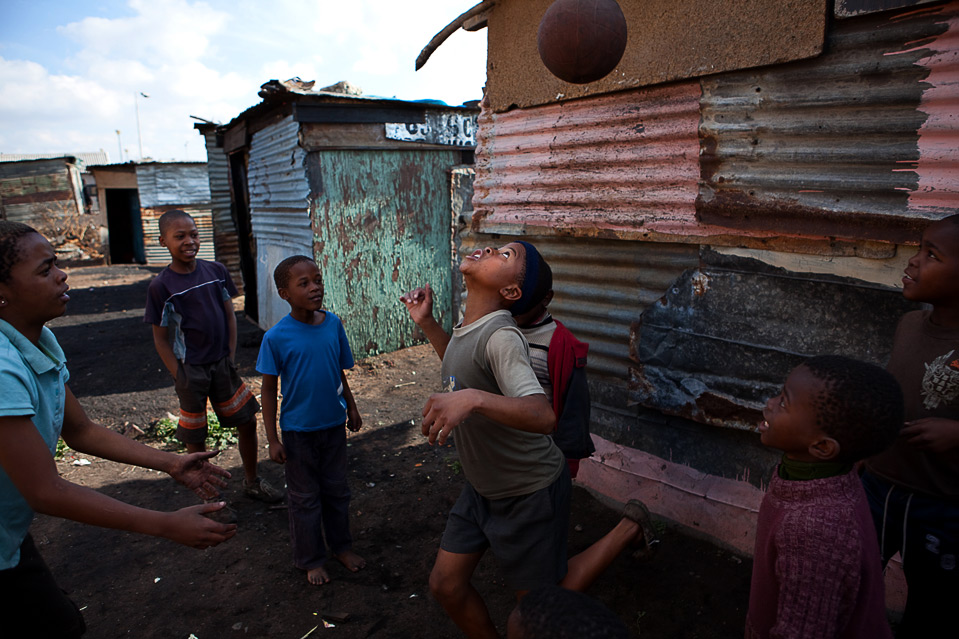 11
Children play football in Soweto June 12 two days ahead of the opening match of the FIFA Confederations Cup in Johannesburg. (YASUYOSHI CHIBA/AFP/Getty Images) # 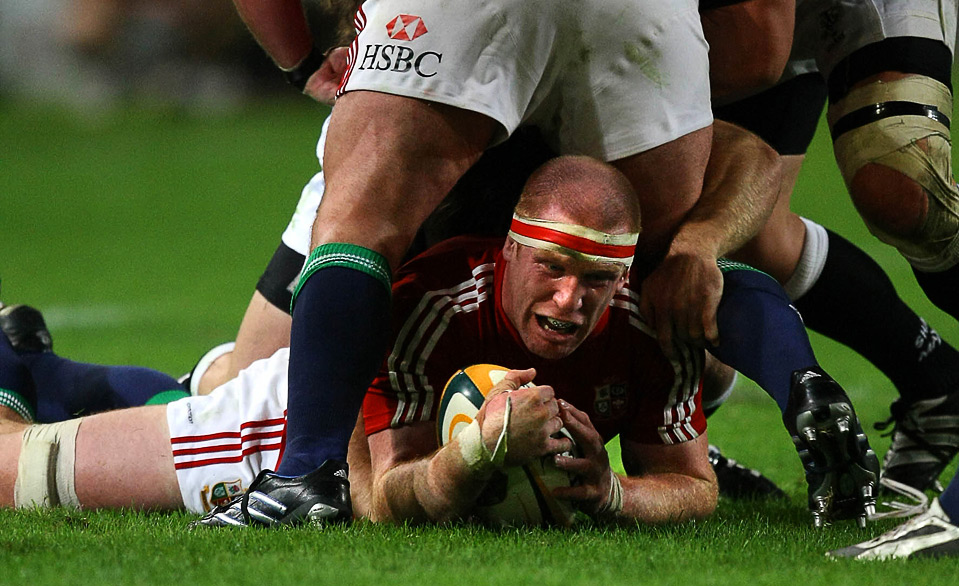 12
British and Irish Lion's captain Paul O'Connell holds on to the ball versus South Africa's Sharks during their rugby match in Durban June 10. (STR/AFP/Getty Images) # 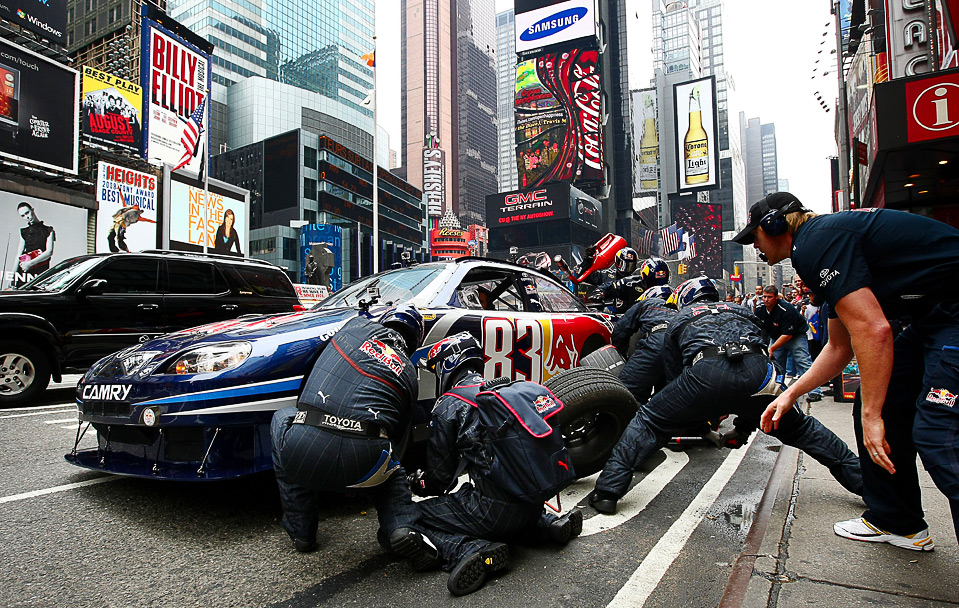 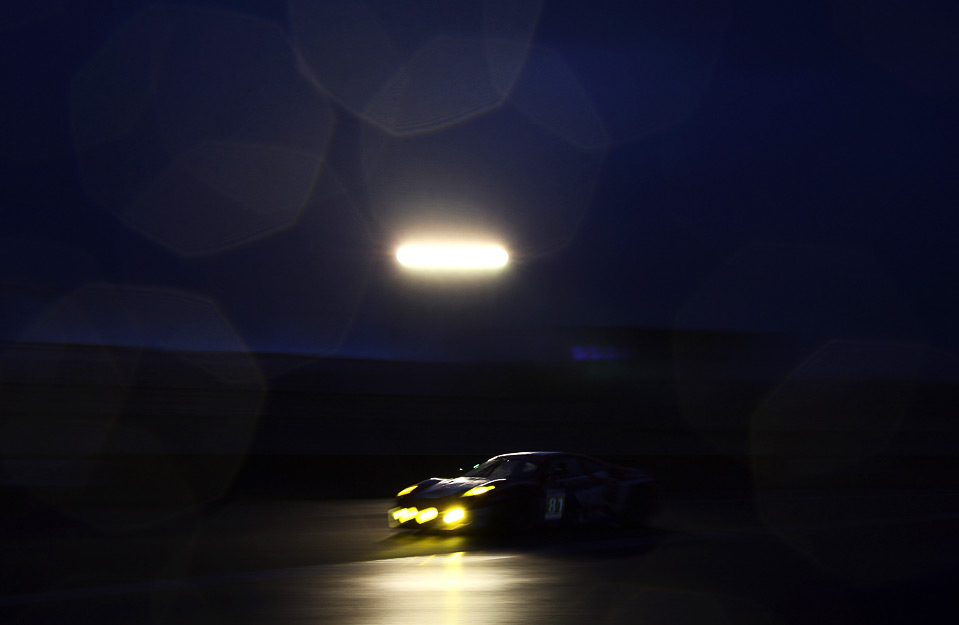 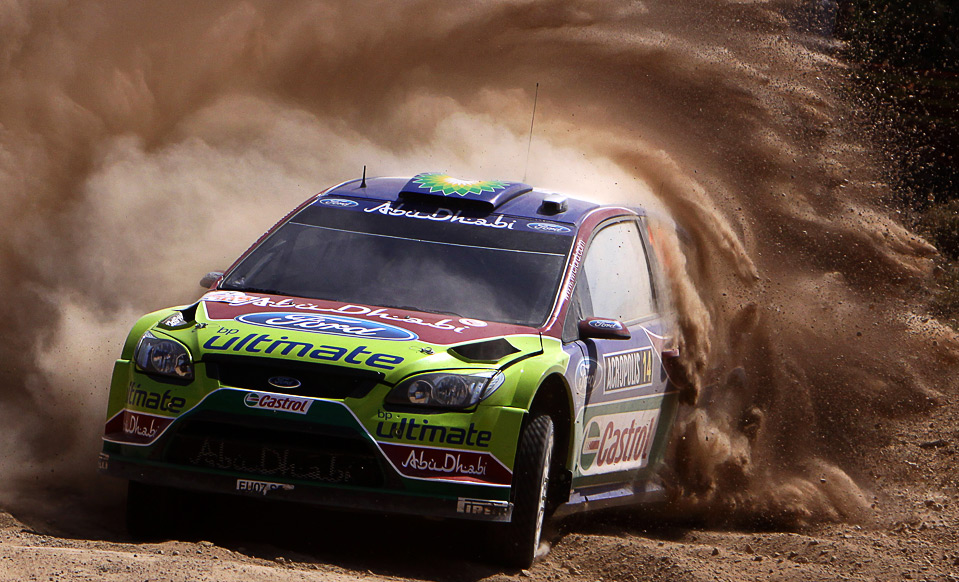 15
Khalid Al Qassimi and his co-driver Michael Orr from United Arab Emirates compete with their Ford Focus RS WRC08 near the town of Thiva, Greece during the Acropolis Rally June 12. (AP Photo/Thanassis Stavrakis) # 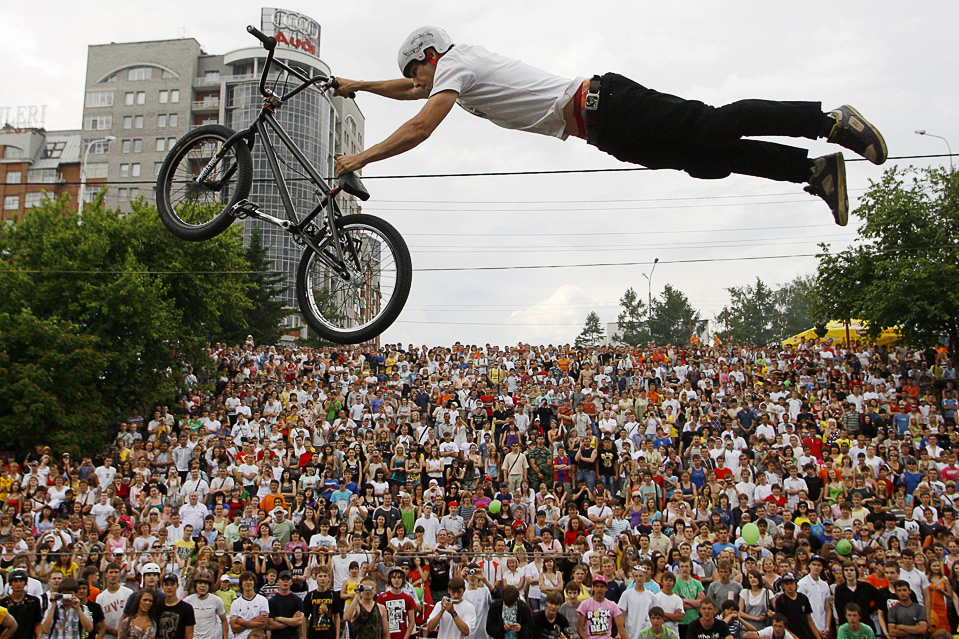 16
Anton Sidorov performs during a freestyle bicycle competition as part of Day of the City celebrations in the Siberian city of Krasnoyarsk June 12. (REUTERS/Ilya Naymushin) #

17
Mikhail Youzhny dives for a forehand during the men's quarter final match against James Blake during the AEGON Championship at Queens Club June 12 in London. (Julian Finney/Getty Images) # 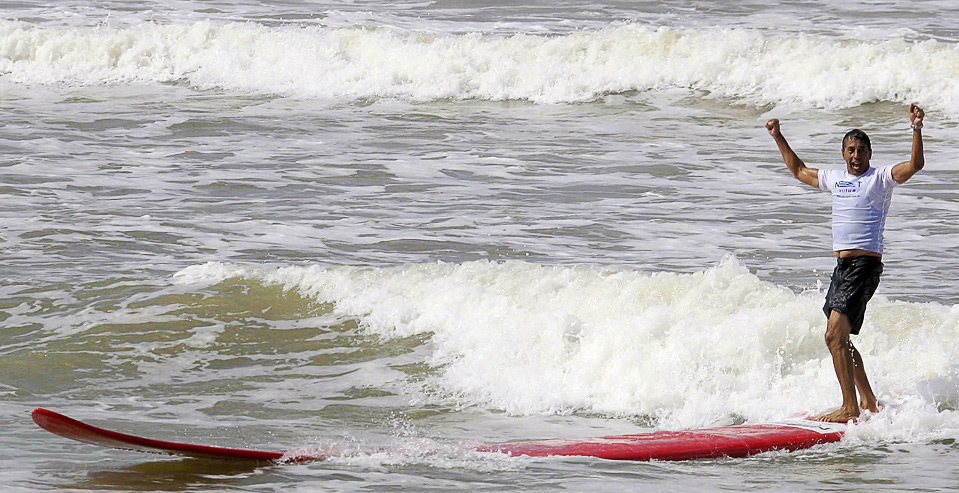 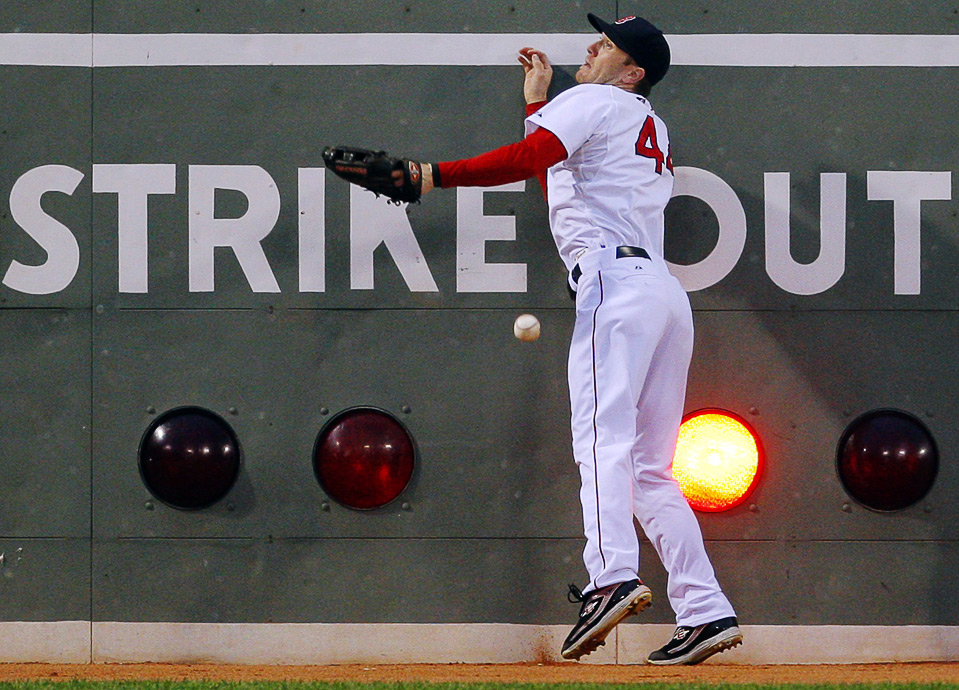 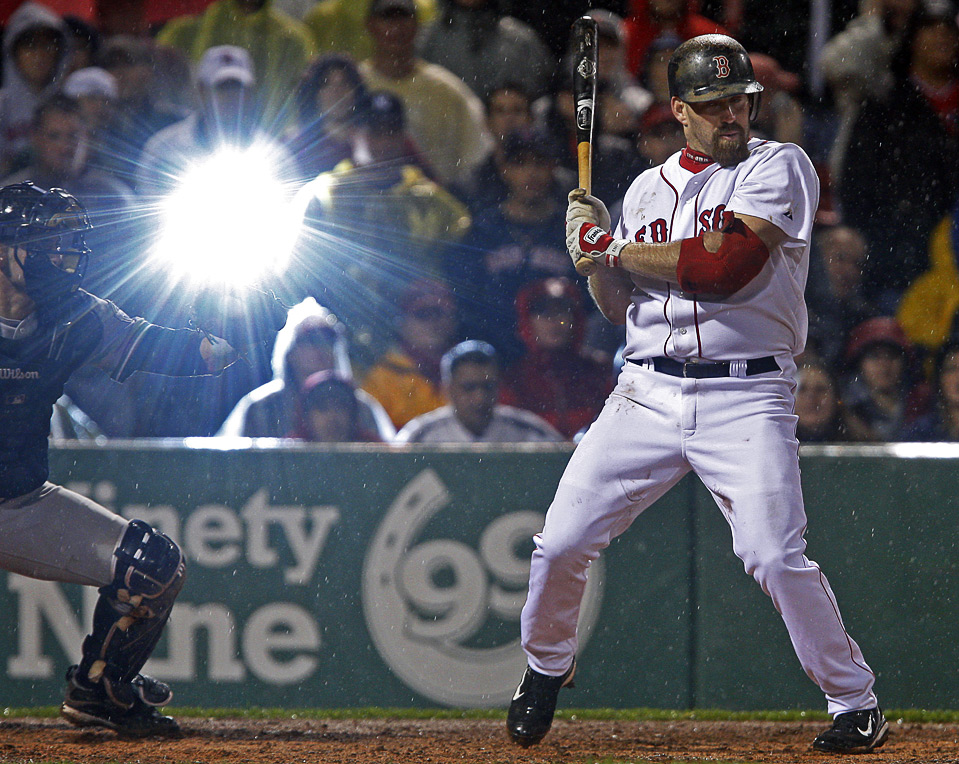 21
A fan's camera flash in the stands lights up the Boston Red Sox' Kevin Youkilis during an MLB baseball game against the New York Yankees at Fenway Park in Boston June 11. (Jim Davis/Globe Staff) # 22
People try to pull out hair from a "dragon's tail" to bring them good luck for the coming year during the traditional Doudou celebration in Mons, Belgium June 14. The annual celebration re-enacts the battle between Saint Georges and a dragon, according to believers. (REUTERS/Sebastien Pirlet) # 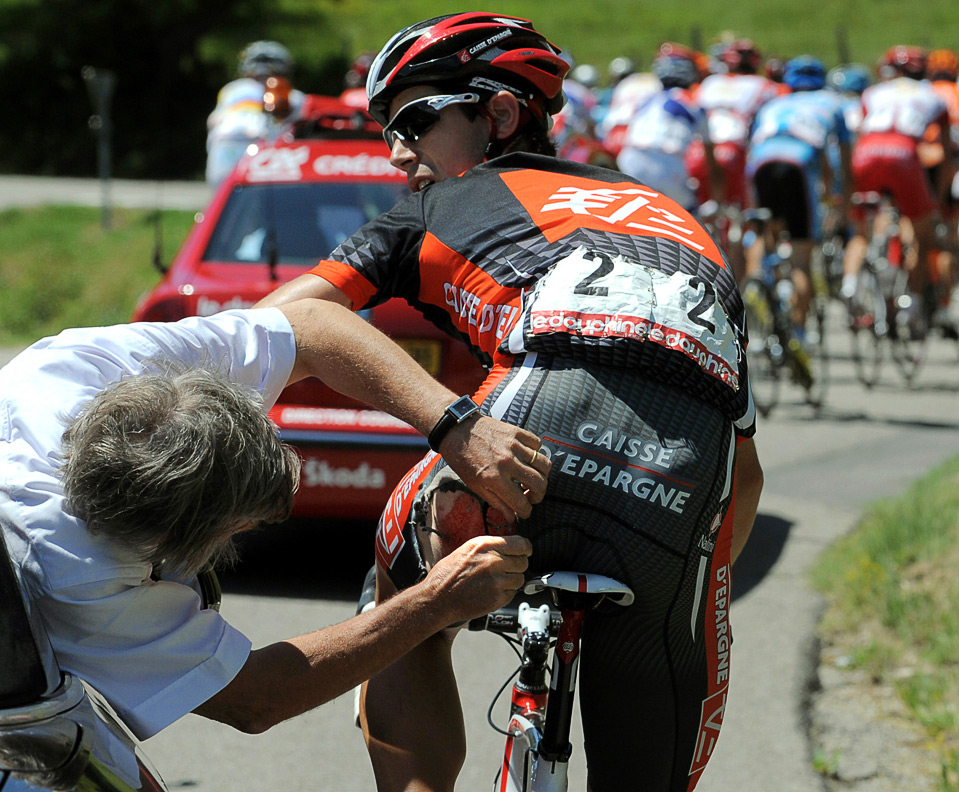 23
A doctor leans out of a car to check the injured leg of Imanol Erviti Ollo June 11 during the fifth stage of the Dauphine Libere cycling race between Valence and Mont-Ventoux. (PATRICK HERTZOG/AFP/Getty Images) # 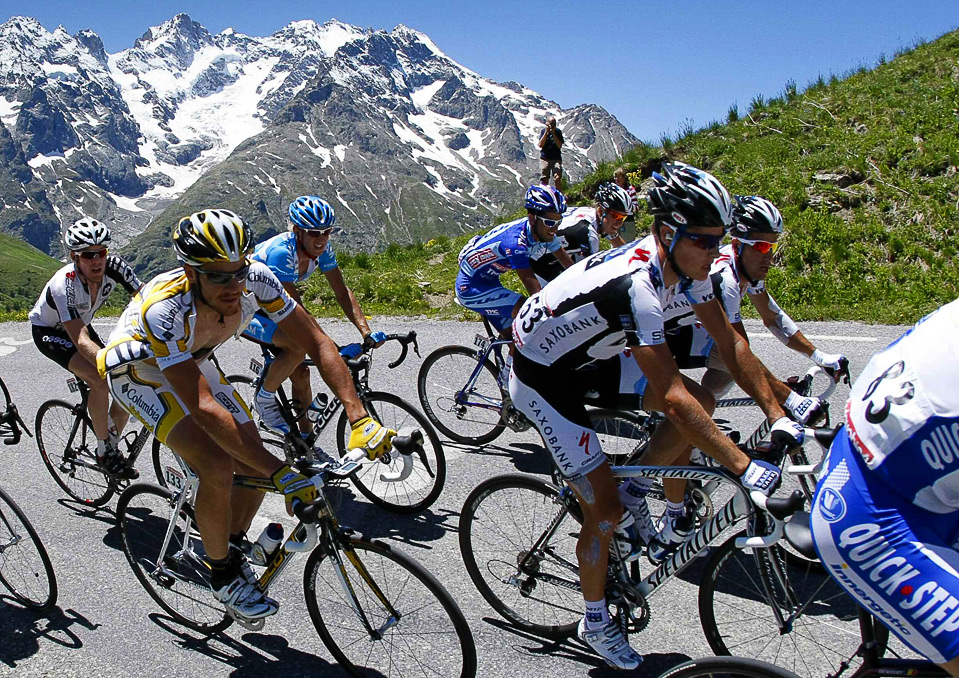 24
Riders climb the Galibier pass during the seventh stage between Briancon and Saint-Francois Longchamp of the Dauphine Libere cycling race June 13. (REUTERS/Robert Pratta) # 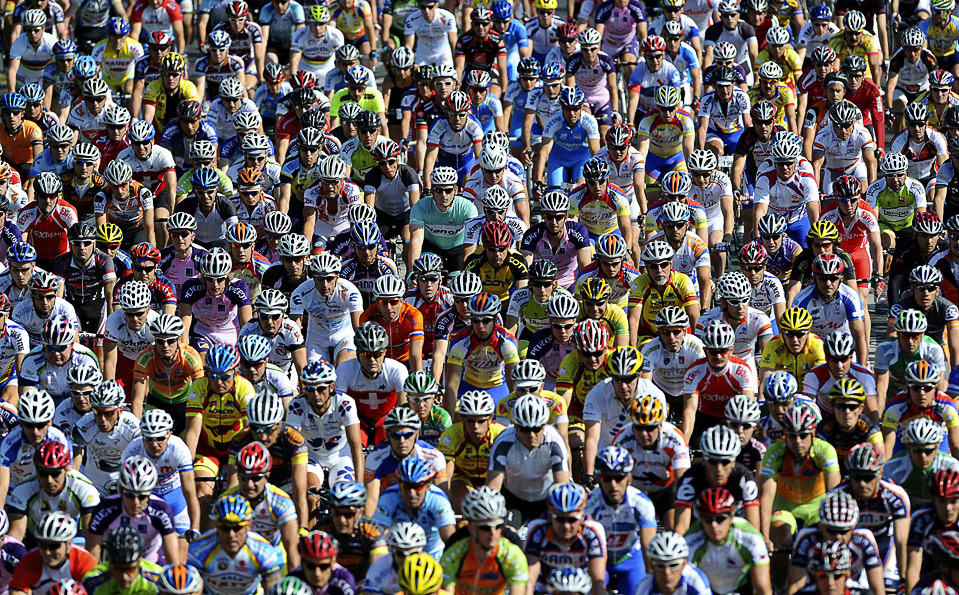 25
Participants ride through the Slovenian capital at the mass start of the 98-mile "Franja" cycling marathon in Ljubljana June 14. (REUTERS/Srdjan Zivulovic) # 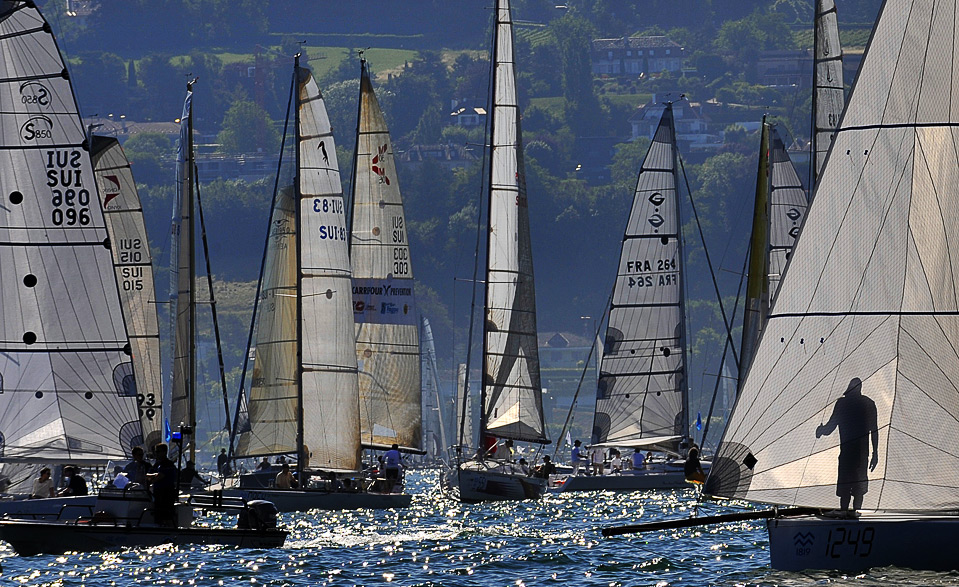 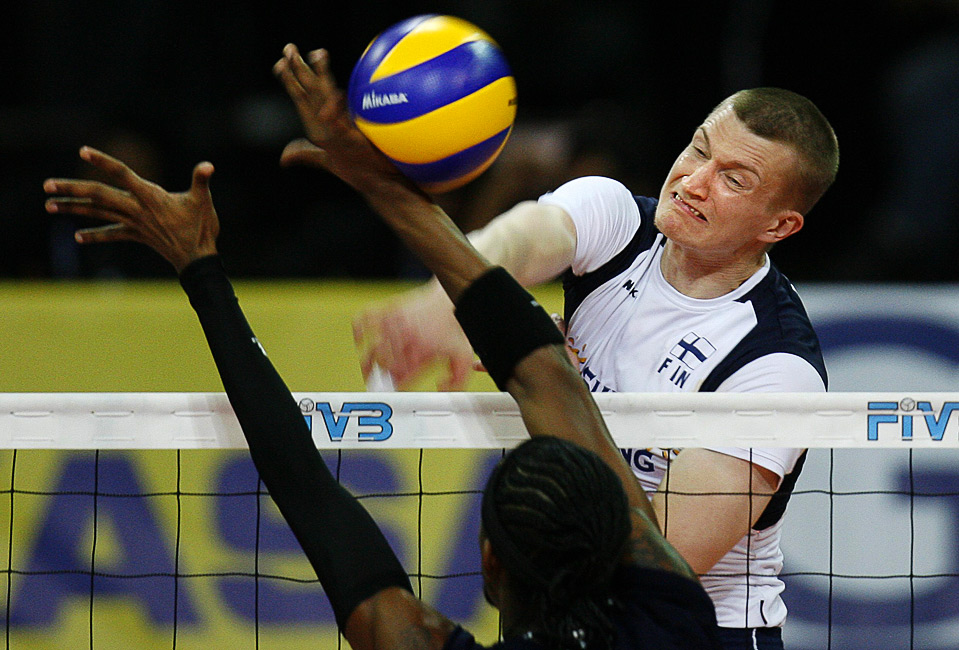 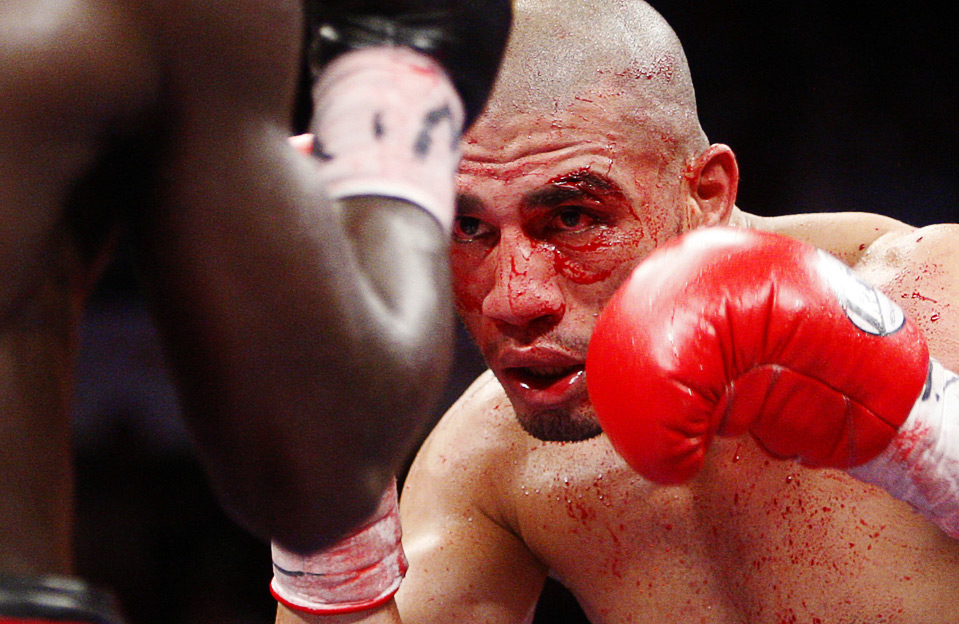 28
Boxer Miguel Cotto waits to deliver a punch against Joshua Clottey during the fourth round of their WBO World Welterwight Title fight at Madison Square Garden in New York June 13. (REUTERS/Shannon Stapleton) # 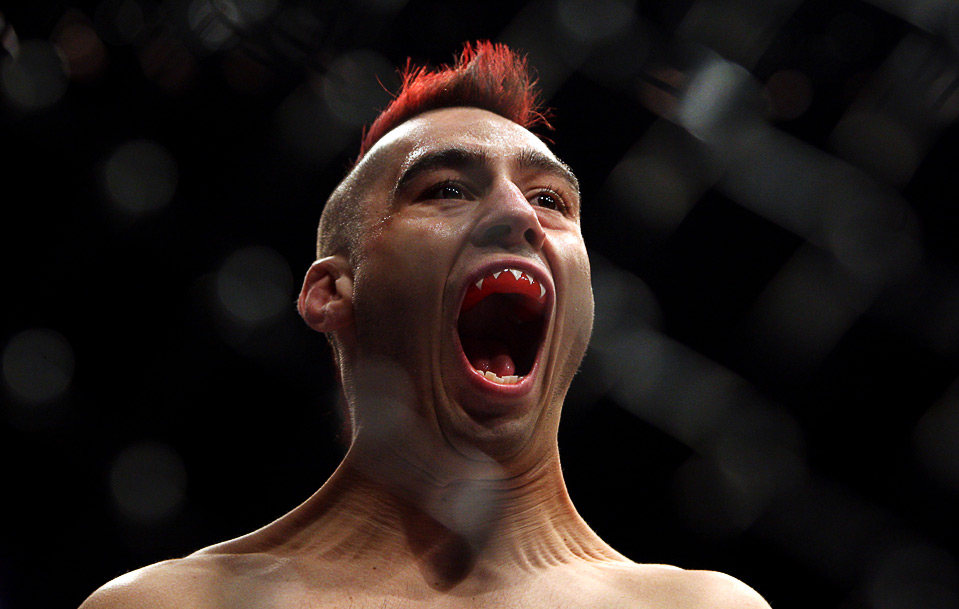 29
Dan Hardy yells prior to his welterweight bout against Marcus Davis during the UFC 99 The Comback at Lanxess Arena June 13 in Cologne, Germany. (Lars Baron/Bongarts/Getty Images) # 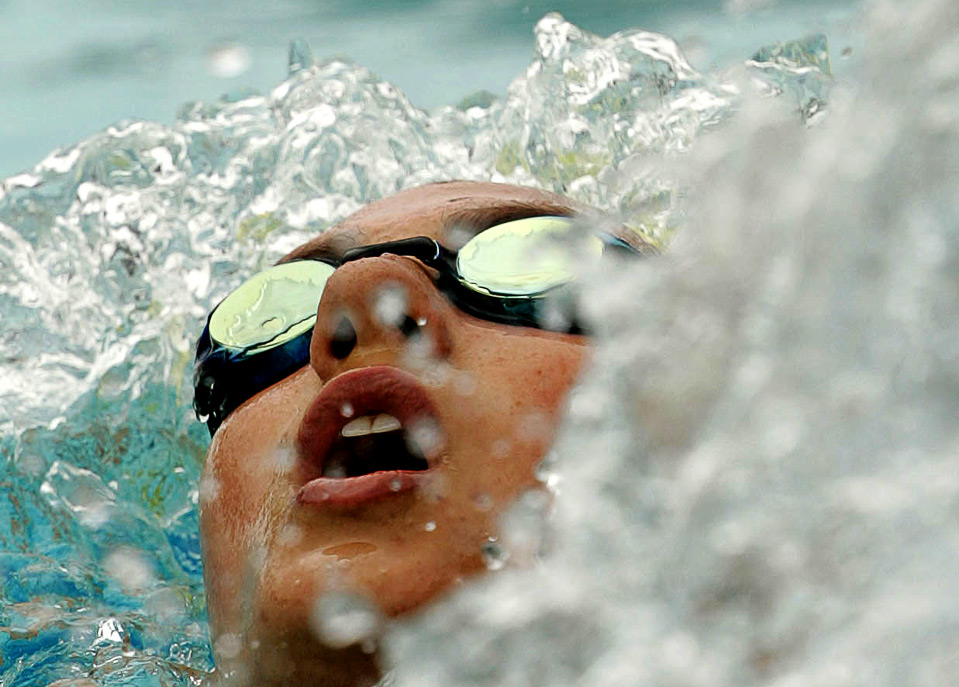 Great pictures as always. Gotta love #1 and the grit and determination in their eyes for $10 grand of shopping. How about some pictures from the Portugal vs. Albania game? They barely beat them and if they didn't, the Brazil of Europe would not make the 2010 world cup!!

Just discovered this site - and THIS PAGE!

Wow - from now on, I'm coming here every day - love so many sports - the dynamism and purity of these pics is heart-stopping - no editorializing, no politics, no scores, no favorites, just the essence of all-out sports competition and the superlative artistry of the photogs. Thank you !!

These photos are amazing, you get a far greater feel for the drama of the various sports, in stark contrast to the 5mm postage stamp size photos in everyday articles.