This week Big Shots heads to London for the start of the Wimbledon Lawn Tennis Championships, bungee jumps off a power station in South Africa, and wonders how to get the stains out after the "tomatina" tomato fight in Colombia. There's also Turkish oil wrestling in Germany and steer wrestling (without oil) in Reno. And there's more to enjoy this week as we look forward to an upcoming post on track & field all over the world. ( 28 photos total) 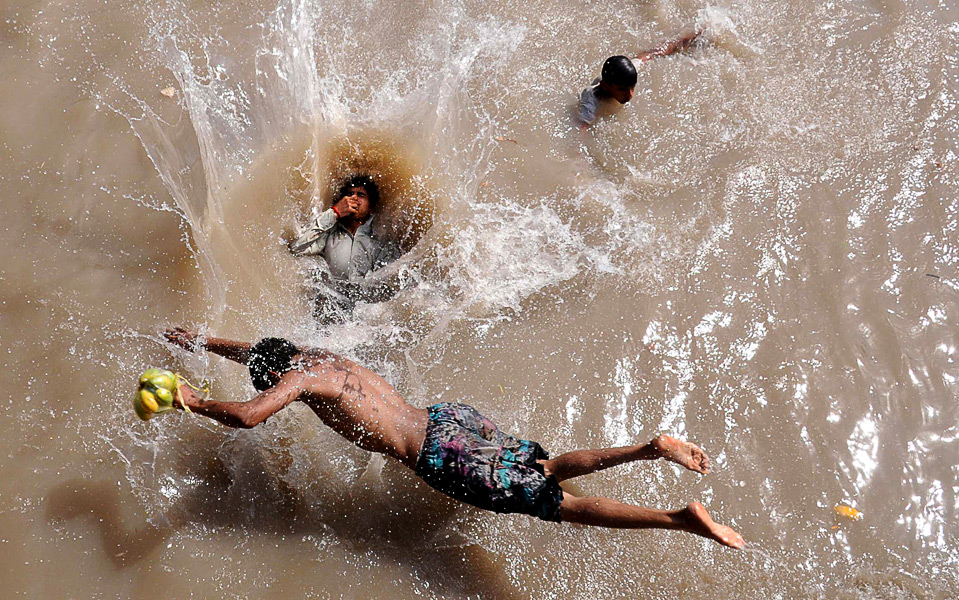 Pakistani youths cool off in a canal during a heat wave in Lahore June 28. (Arif Ali/AFP/Getty Images) 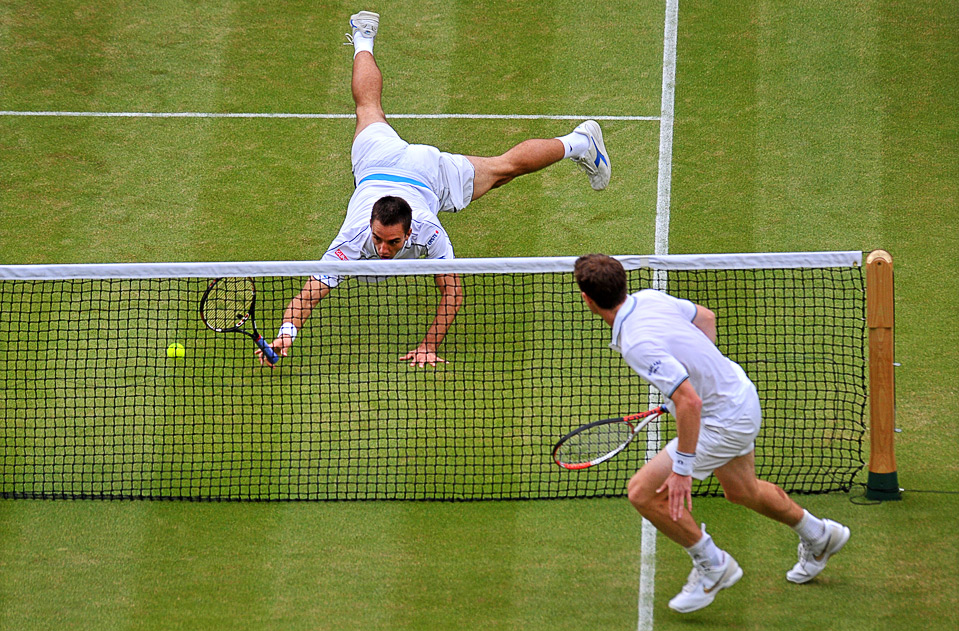 2
Serbia's Victor Troicki dives for the ball against Britain's Andy Murray during the 2009 Wimbledon Tennis Championships at the All England Lawn Tennis and Croquet Club June 27. (CARL DE SOUZA/AFP/Getty Images) # 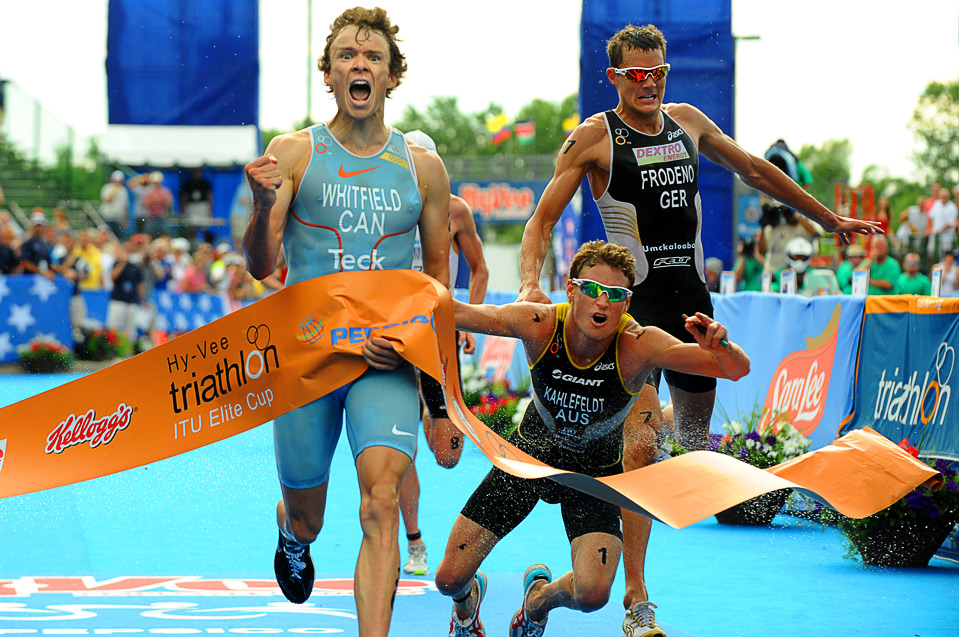 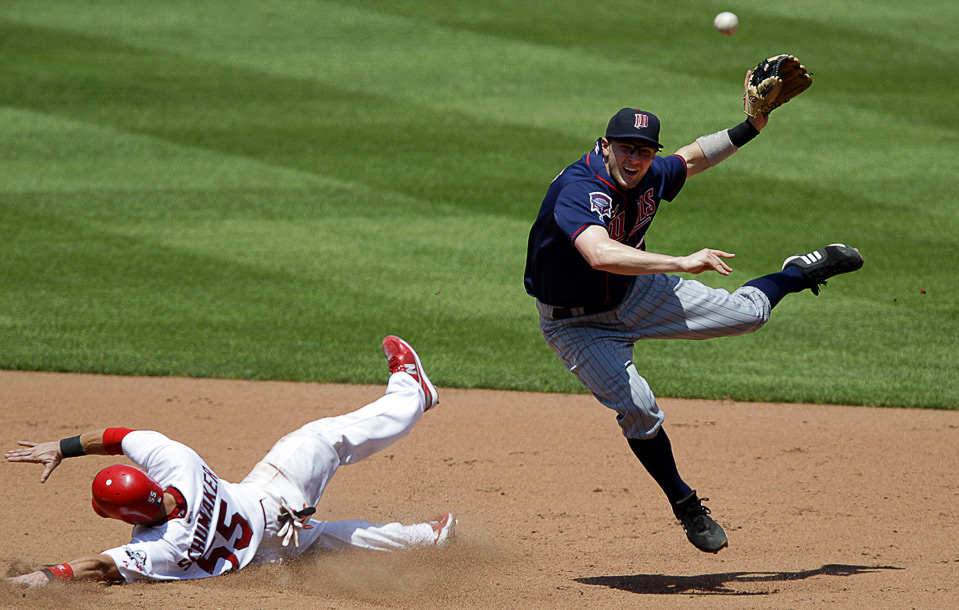 4
Minnesota Twins shortstop Brendan Harris (right) is unable to turn a double play as the St. Louis Cardinals' Skip Schumaker is forced out at second during a baseball game June 27 in St. Louis. (AP Photo/Jeff Roberson) # 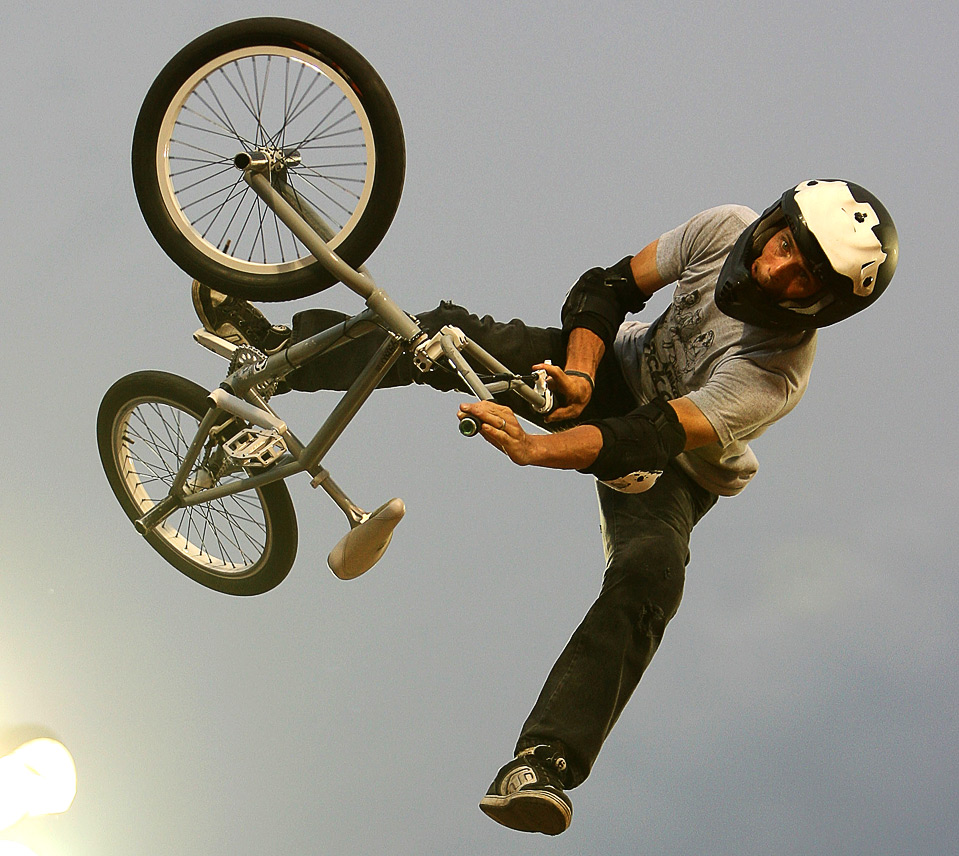 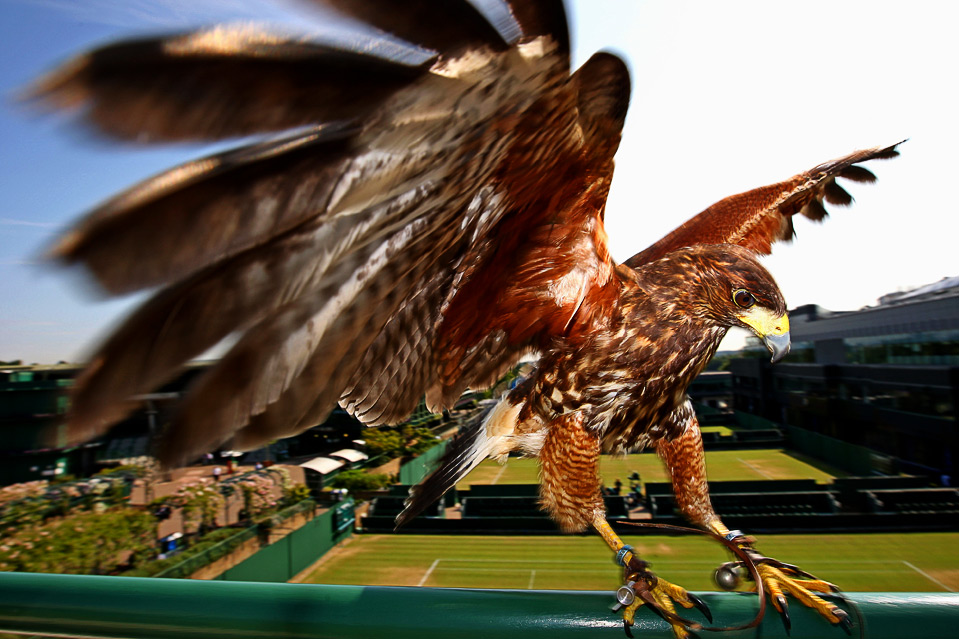 6
Rufus the resident Harris Hawk keeps the courts pigeon-free during the Wimbledon Lawn Tennis Championships at the All England Lawn Tennis and Croquet Club June 29 in London. (Ian Walton/Getty Images) # 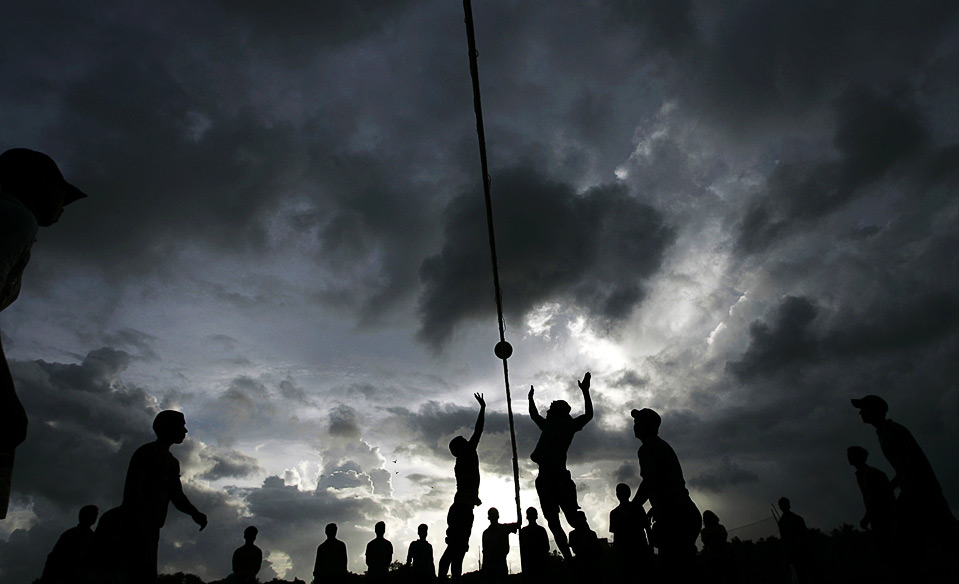 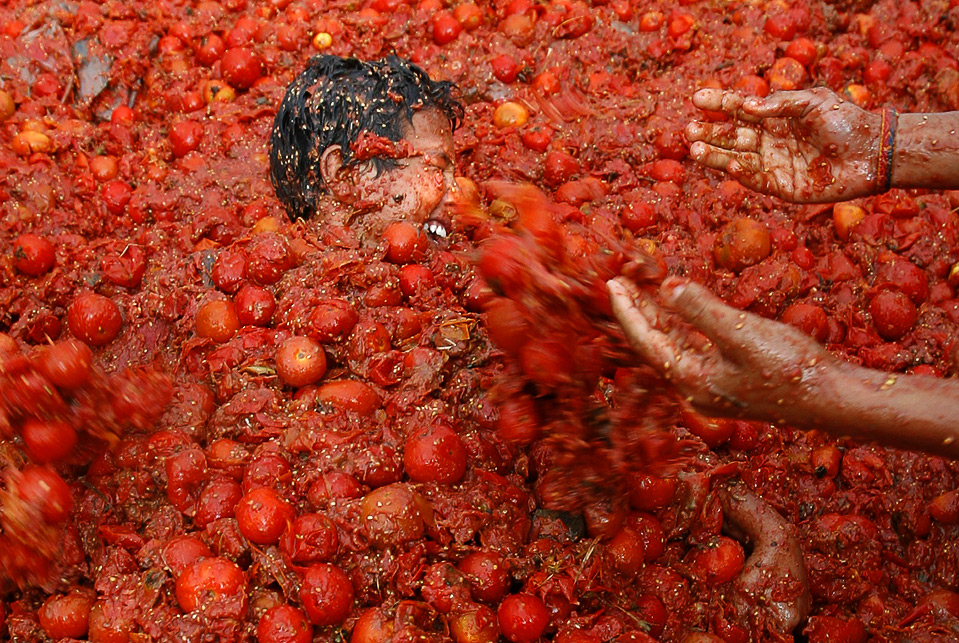 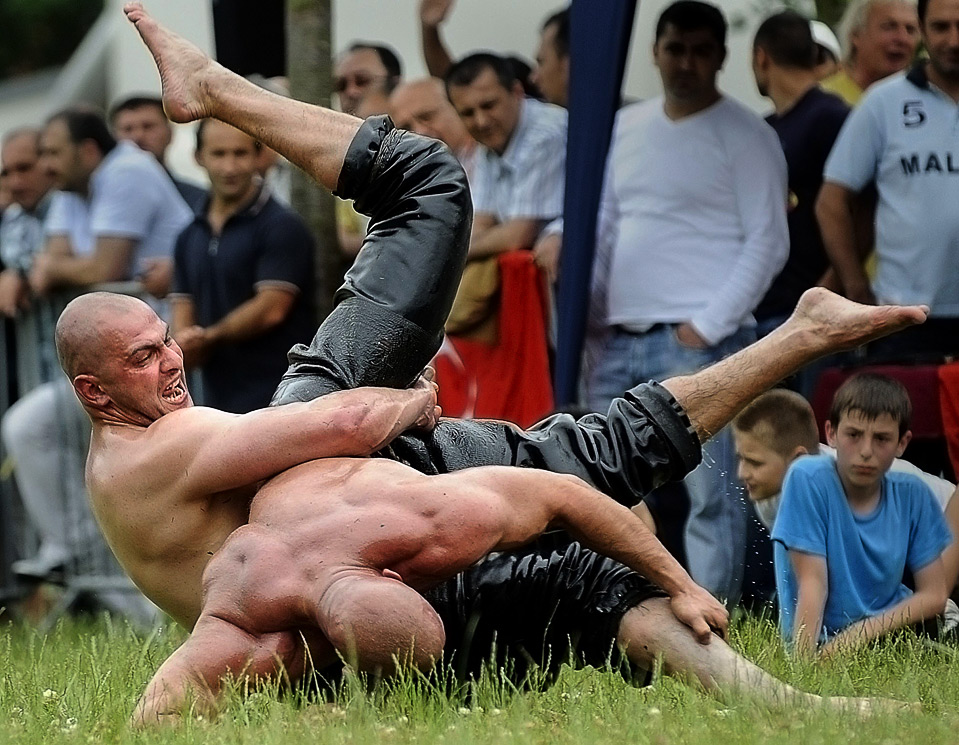 10
Wrestlers compete during the Turkish oil wrestling event in the western German city of Kassel June 28. In the Turkish national sport also known as âYagh gueresâ, the athletes douse themselves with olive oil before the fight. (THOMAS LOHNES/AFP/Getty Images) # 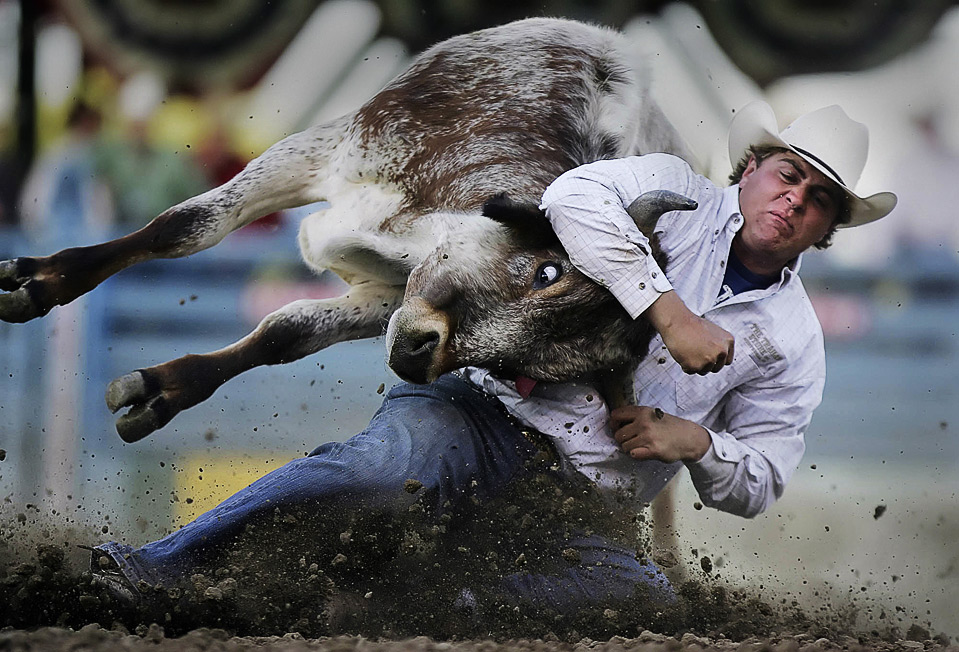 11
Zane Hankel tackles a steer during the steer wrestling competition at the Reno Rodeo at the Reno Livestock Events Center in Reno June 24. (AP Photo/Brad Horn) # 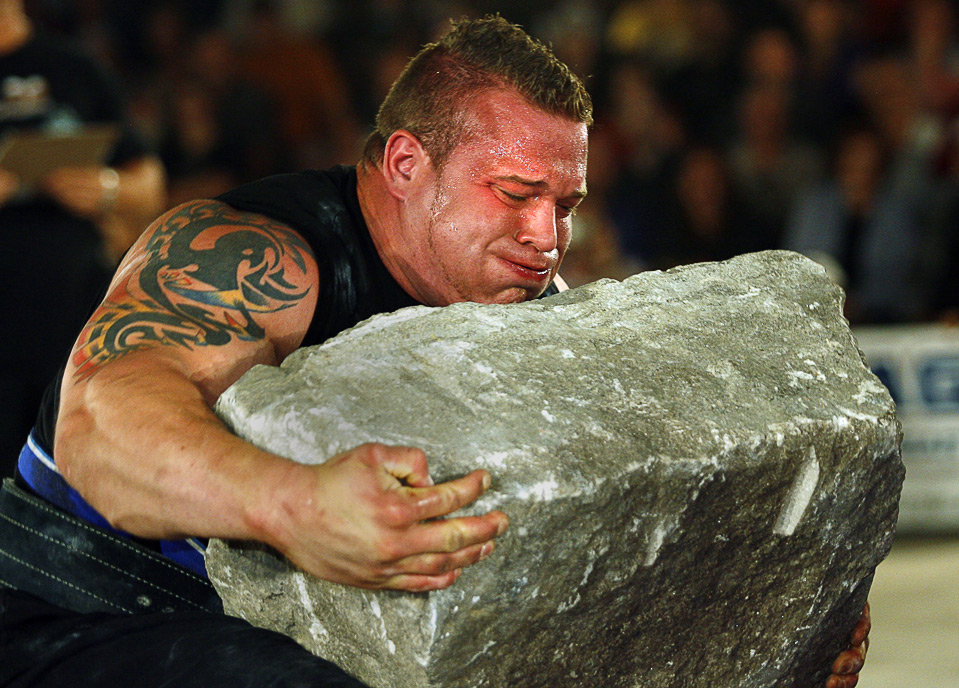 12
Louis-PhilippeJean grimaces as he lifts a stone in the Slater King of Stone Challenge at the Fortissimus World Strength Challenge June 28 in Montmagny, Quebec. (AP Photo/The Canadian Press/Jacques Boissinot) # 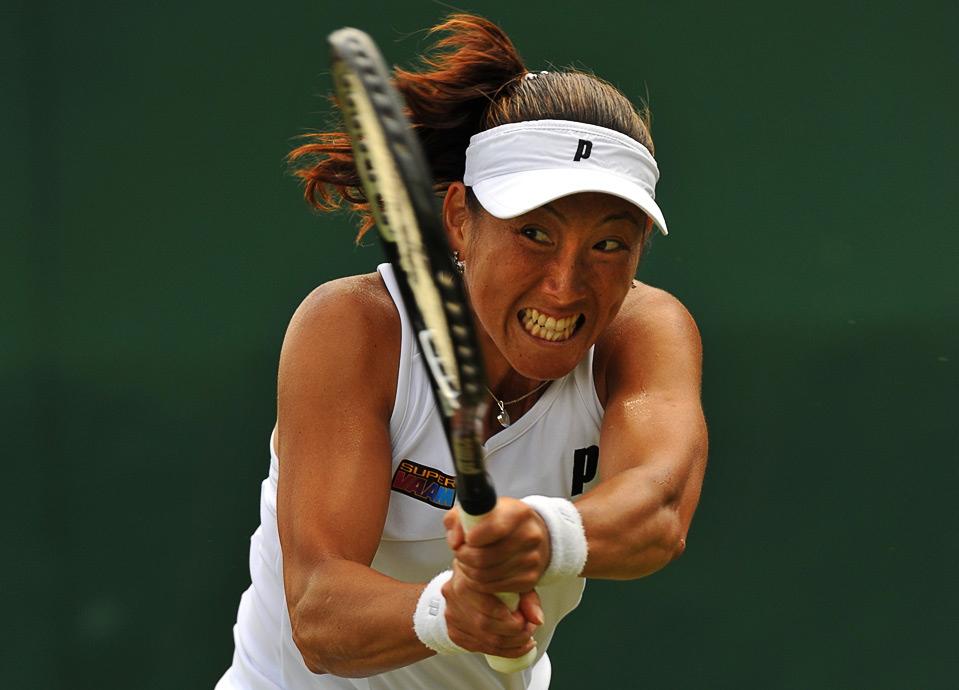 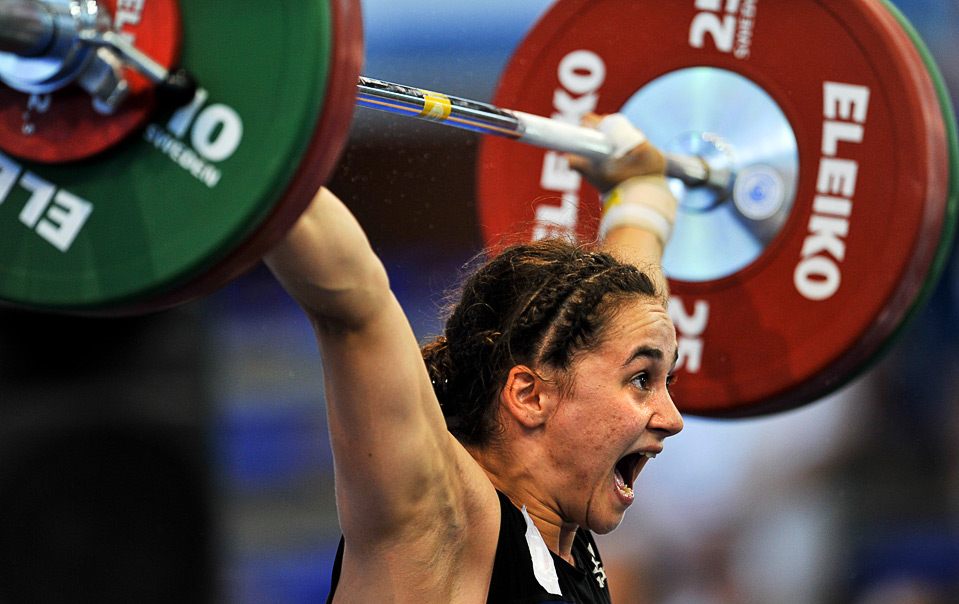 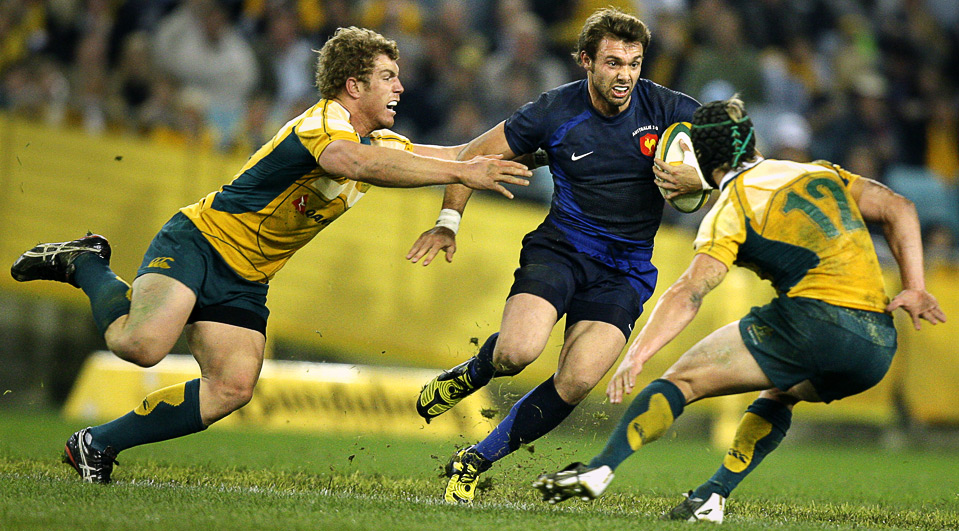 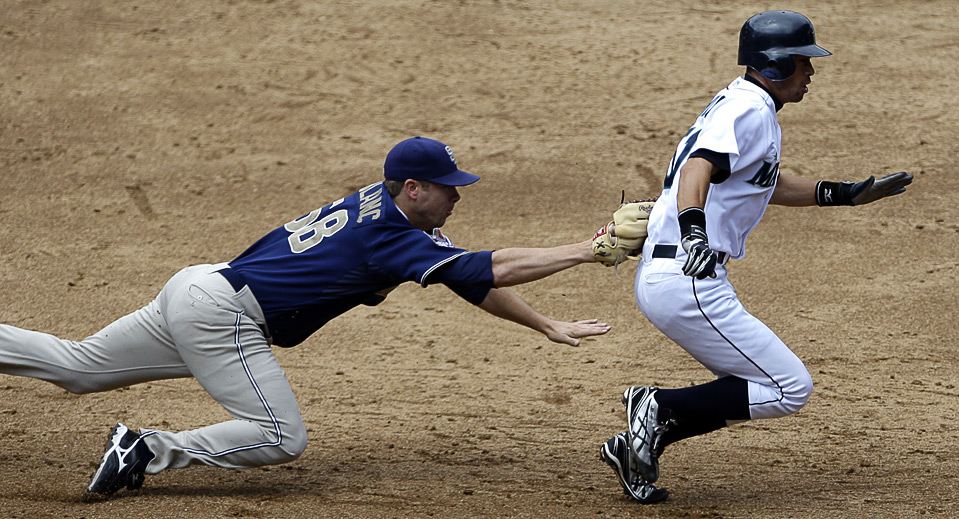 16
The Seattle Mariners' Ichiro Suzuki (right) is tagged out by the San Diego Padres Wade LeBlanc during a rundown between second and third bases June 25 during a baseball game in Seattle. (AP Photo/Elaine Thompson) # 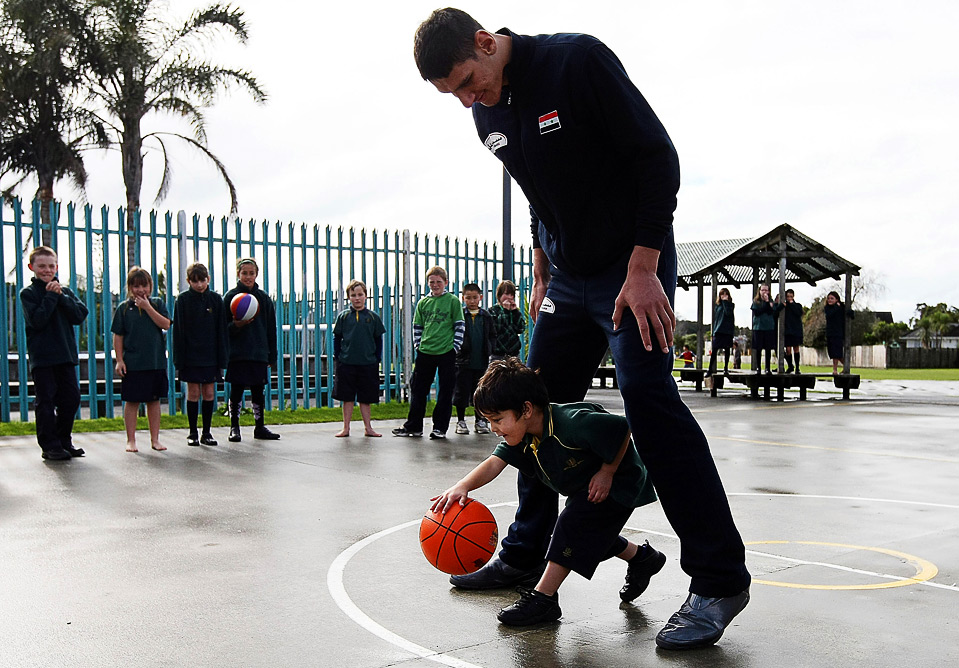 17
Five-year-old Boston Thompson dribbles through the legs of 7' 6" Syrian Abd Al Wahab Al Hamowi as the Syrian U19 basketball team visits a school June 29 in Auckland during the 2009 FIBA U19 World Champiosnhip. (Photo by Hannah Johnston/Getty Images) # 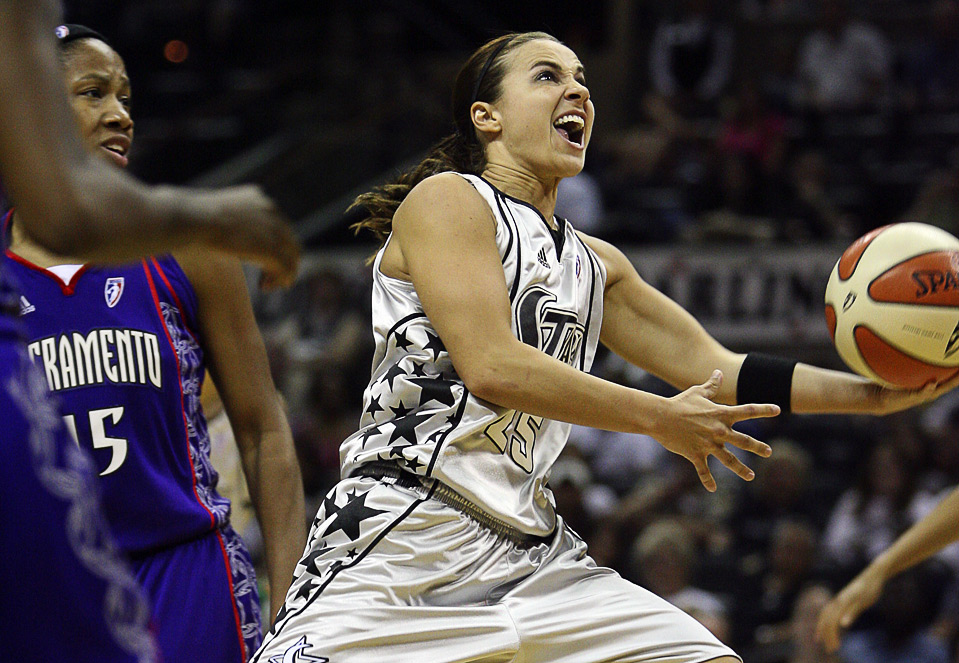 18
The San Antonio Silver Stars' Becky Hammon drives to the basket against the Sacramento Monarchs during an WNBA basketball game at the AT&T Center in San Antonio June 26. (AP Photo/San Antonio Express-News/Tom Reel) # 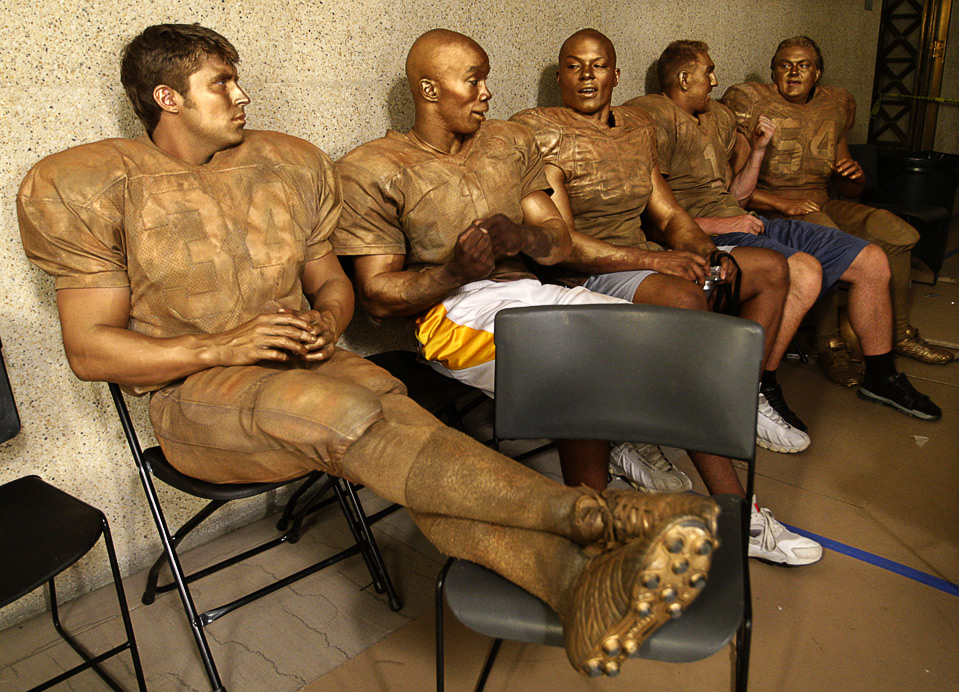 19
Models painted gold to look like statues wait for their cue to join the taping of a segment for ESPN's Monday Night Football in Nashville June 22. (AP Photo/Mark Humphrey) # 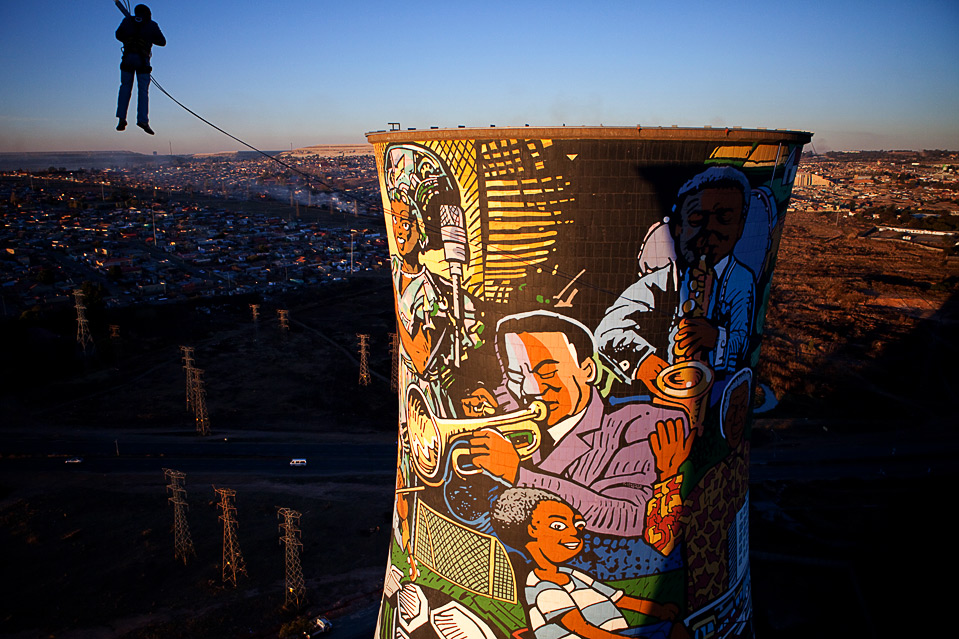 20
A man bungee jumps from the top of a closed thermal power plant in Soweto June 28. (YASUYOSHI CHIBA/AFP/Getty Images) # 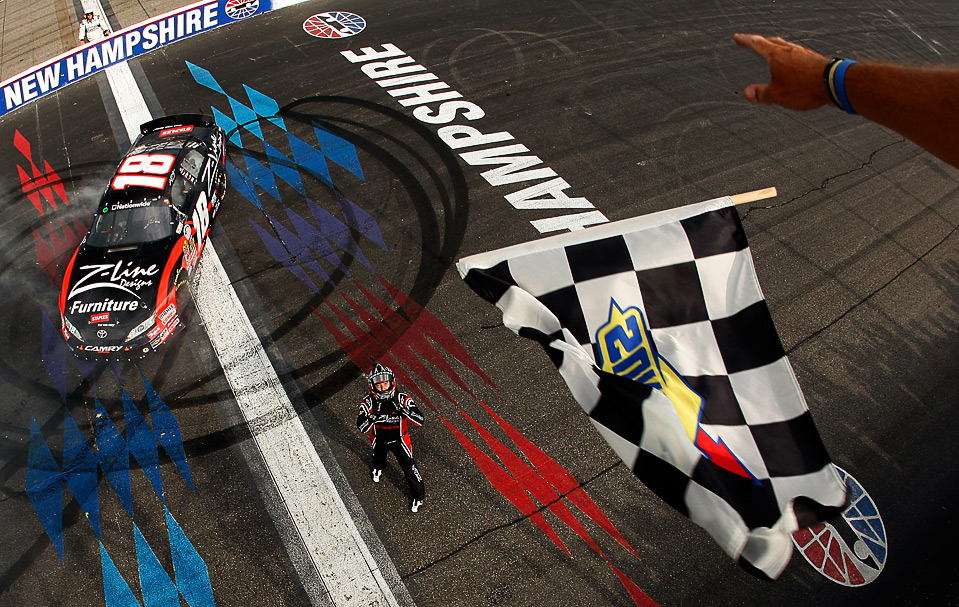 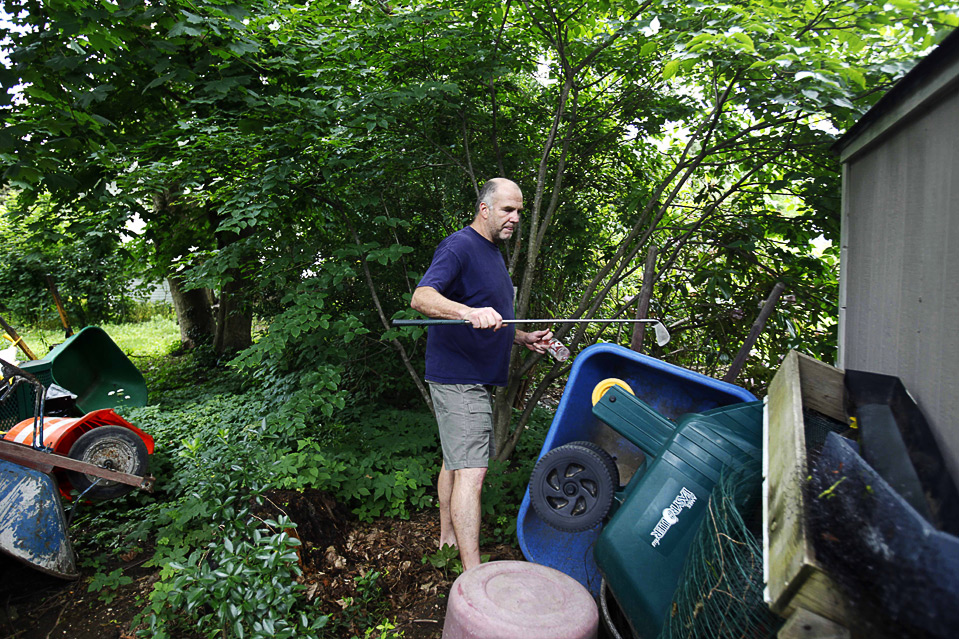 22
Mike Lennon, an organizer of the Sea Cliff golf tournament, tries to figure out how to get to the next hole through some gardening tools and bushes in a yard in Sea Cliff, N.Y. The tournament is part mini-golf and part neighborhood tour: the thirty-six holes are in public parks, private yards, and even through a neighbor's enclosed courtyard. All the proceeds from the whimsical tournament will go to the local library and fire department. (AP Photo/Seth Wenig) # 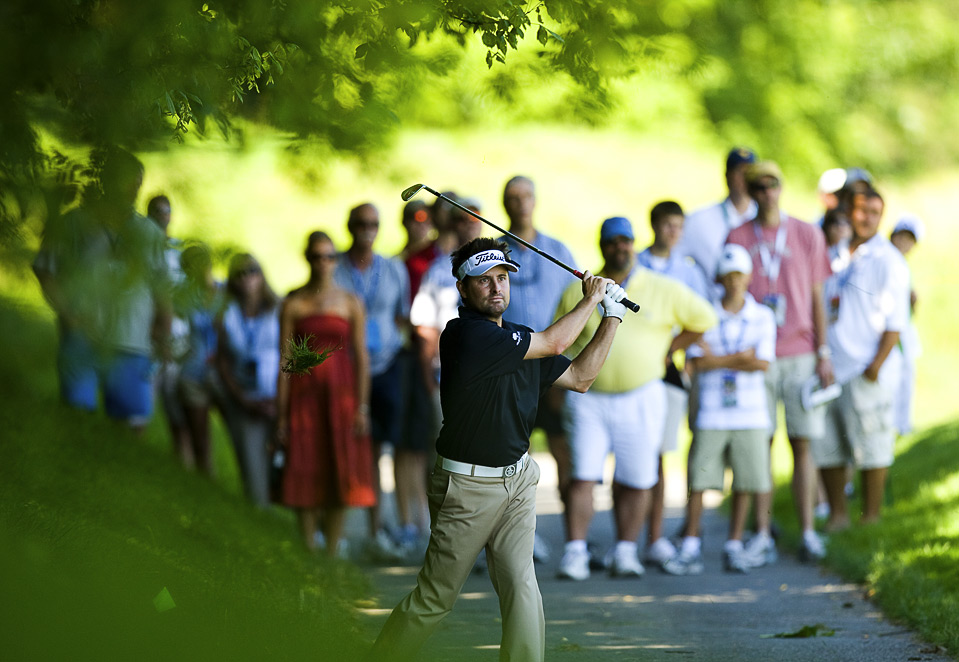 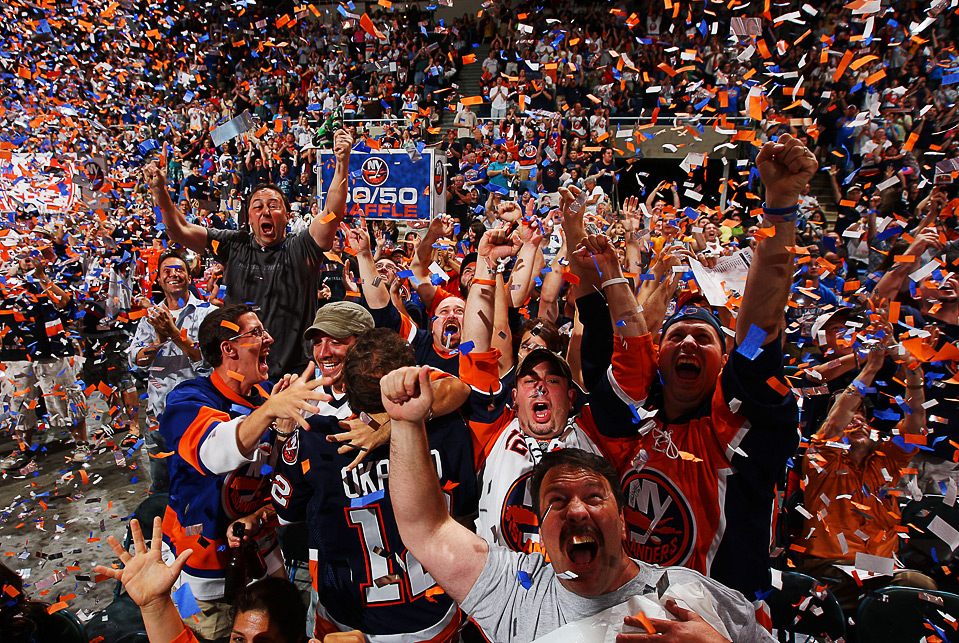 24
Islander fans cheer after John Tavares is picked number one overall in the 2009 NHL Entry Draft by the New York Islanders during the Islanders Draft Party June 26 at Nassau Coliseum in Uniondale, N.Y. (Mike Stobe/Getty Images) # 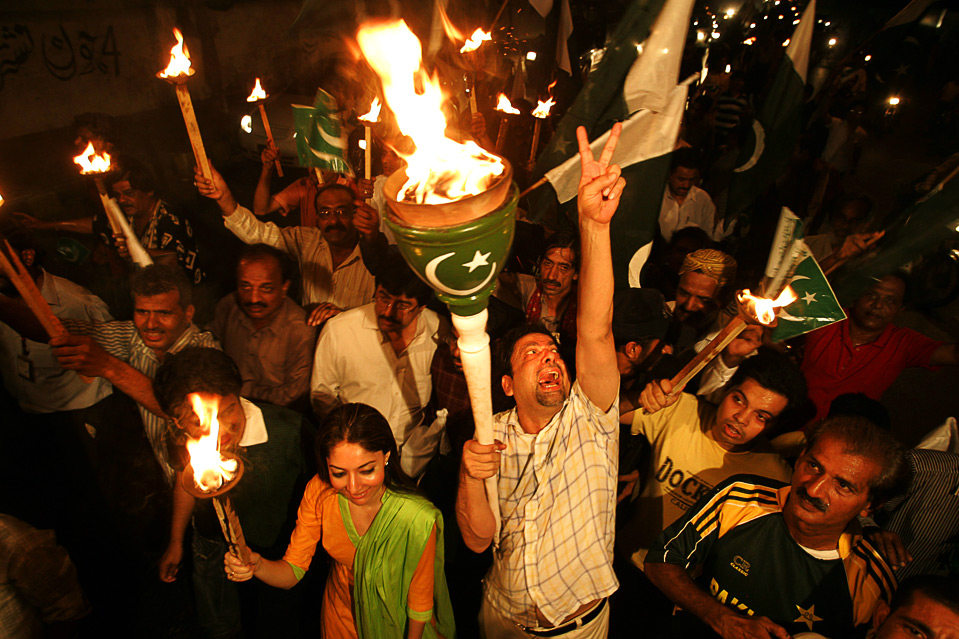 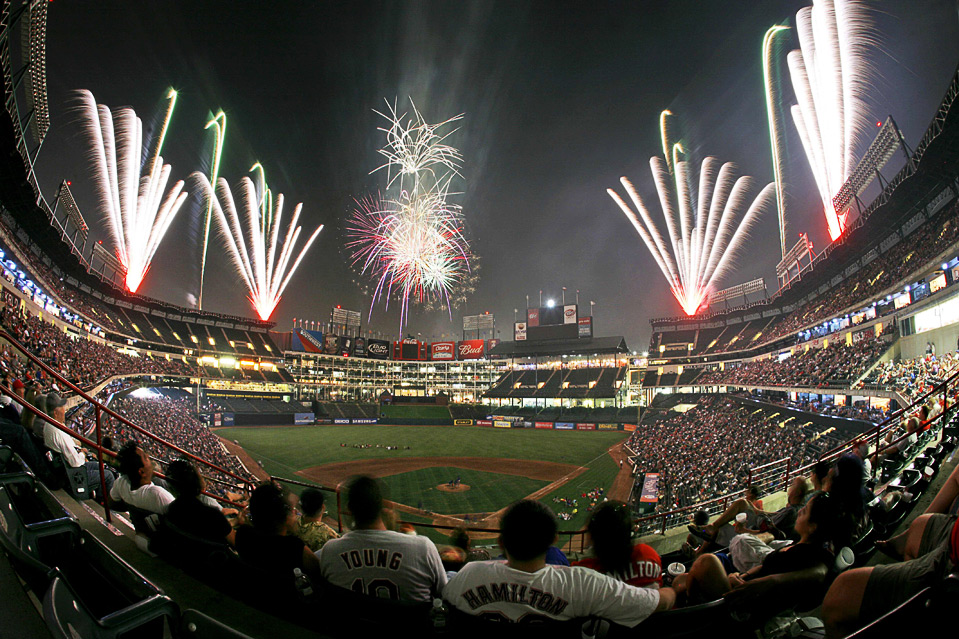 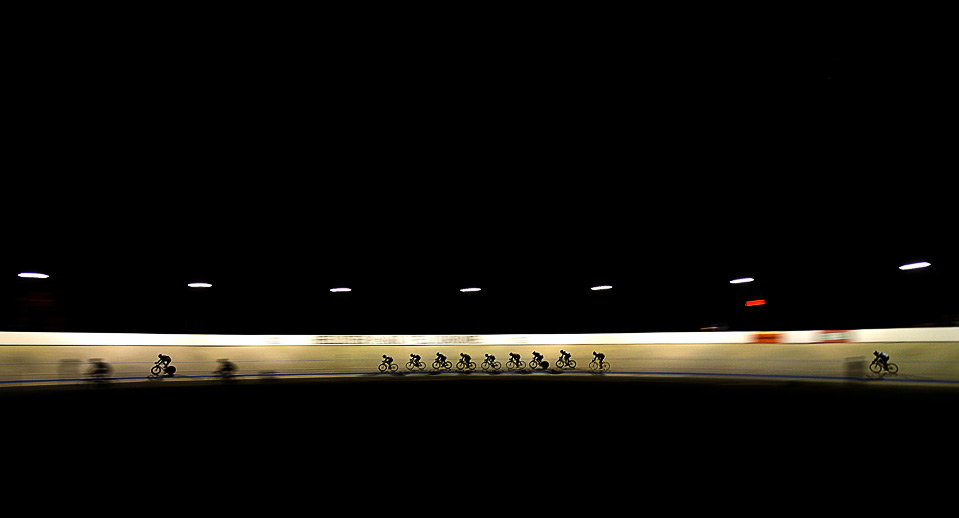 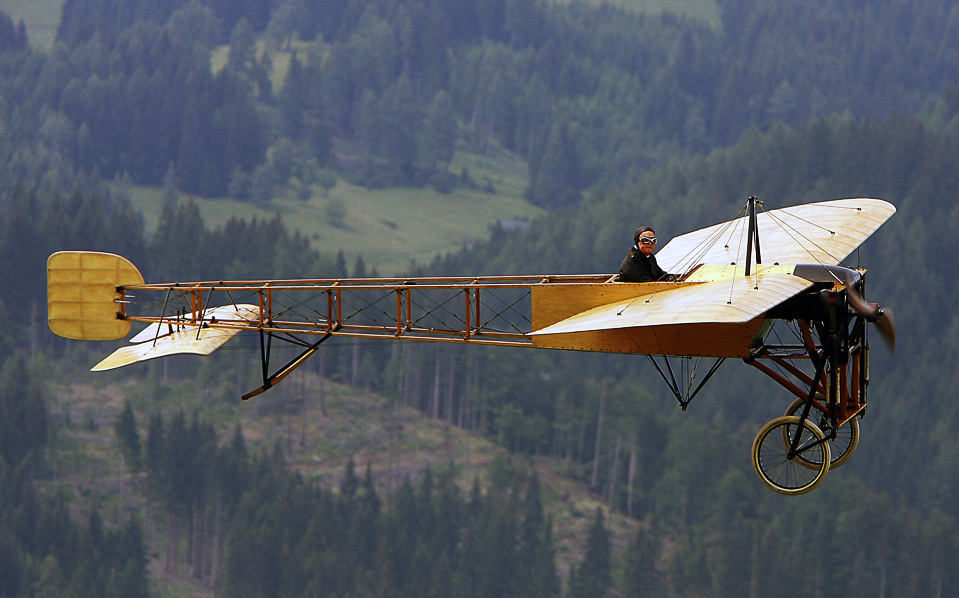 28
A Bleriot XI aircraft from the year 1908 performs during the Airpower 09 airplane show in Zeltweg, Austria June 26. (AP Photo/Ronald Zak) #

Very interesting -- wish there were some Western States 100 shots in this group!