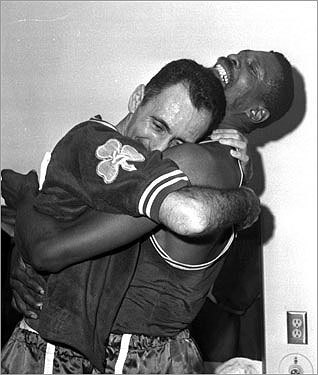 After roundly demolishing the league to the tune of a 58-22 record in the regular season, the Celtics marched through the playoffs, defeating the Cincinnati Royals in seven games in the Eastern Division finals before knocking off the Lakers in six games in the NBA Finals. In his last Boston season, Bob Cousy (left) averaged 13.2 points per game, and Bill Russell (right, 16.8 points per game, 23.6 rebounds per game) took home league MVP honors.