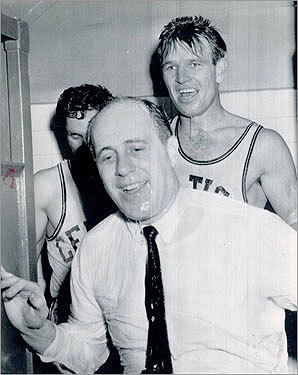 The Celtics' 11th NBA season marked the beginning of a sports dynasty. Led by Red Auerbach, the boys in green went on to win 11 of the next 13 championships. Auerbach traded for the draft rights of a center named Bill Russell, and chose Holy Cross's Tommy Heinsohn, who would become rookie of the year in 1956-57. In the Finals, Game 7 against the St. Louis Hawks went into double overtime, with the Celtics coming out on top, 125-123. Bob Cousy was named the league MVP, while All-NBA first teamer Bill Sharman led the league-best Celtics (44-28), averaging 21.1 points per game.