He settled in after unsettling period 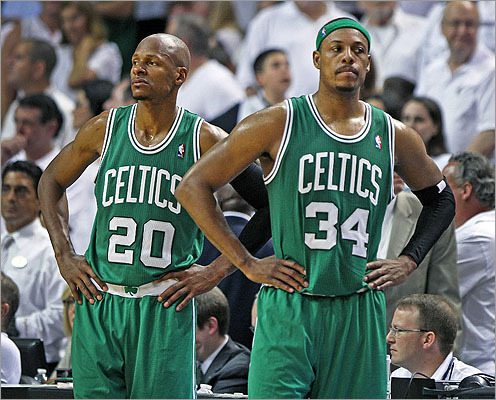 Paul Pierce said he was truly prepared to move forward. When he approached the media in the back of the visitors’ locker room at AmericanAirlines Arena June 9, Pierce talked as if the Big Three Era, and perhaps his time with the Celtics, was over.

“I mentally was prepared for that,” he said Friday after the final day of his annual basketball camp at Basketball City. “[Now] I am about to redo my carpet, no seriously. I wasn’t about to. But I am about to put new furniture in my basement knowing I’ll probably be here a couple of more years. No, that’s the truth. I wouldn’t have done that if I thought I was going somewhere else.”

Pierce had remained eerily silent the past seven weeks as the Celtics retooled. for perhaps two or three more years of deep playoff runs. Pierce spoke that June night as if Kevin Garnett had played his final game as a Celtic and he wouldn’t be the only one departing.

But team president Danny Ainge decided to not only re-sign Garnett for three more years but also bring back Brandon Bass, Keyon Dooling, Jeff Green, Chris Wilcox and then add Jason Terry and Courtney Lee. The Celtics are geared for more postseason success but that will occur without Ray Allen, who stunned Pierce and the rest of the organization by signing with the Miami Heat, accepting half the money Boston offered.

“I was a little disappointed, playing with Ray for five years,” he told the Globe. “ But at the end of the day, Ray has to make a decision that’s best for him and his family. He’s always going to be my brother. No hard feelings. There’s never going to be any hard feelings there, regardless. I was able to win a championship with him, something you’re going to be able to remember the rest of your life.

“We’re going to be able to come back here years from now when we’re all done. We’re going to be standing together at halfcourt sometime in the Garden. He did what’s best for him.’’He’s a couple of years away from retirement and he just felt that was best for his family.”

Allen said Pierce did not try to recruit him back to Boston. , and Pierce agreed with that assessment.

“I didn’t really feel the need for that,” he said. “Ray’s been here five years. Ain’t like I don’t know him and I’m trying to get him here. He knows everything that’s going on. He knows what he wants. I don’t think there’s nothing I could have said, KG, (Kevin Garnett), Doc [Rivers] or anybody could have said that could have changed his mind. I would love to have him back here. I thought it would have made our chances greater at getting to the Finals.”

Pierce did not deny a rift between Allen and Rondo, but also said that such issues between teammates are not uncommon.

“You know what? There’s a lot of stuff that goes on in NBA locker rooms that don’t even get talked about,” he said. “I had beef with a number of players that just don’t get talked about. And the reason I say that is that it’s nothing that’s new. It’s every year. You’re around each other all the time and sometime you have disagreements. That’s just the nature of it sometimes when you got strong personalities in one locker room.

“You’re going to have differences. You’re around each other 24/7, bus, plane, lunch, dinner. I didn’t see nothing any different that went on with Ray and Rondo that went on with me and KG or me and Brandon Bass or stuff that has been going on over the years.”

This season may be Pierce’s final year in Boston. He has one year on his contract with a team option for 2013-14. He said he has no plans of asking for an extension. since Garnett, Terry and Bass are signed to three-year deals.