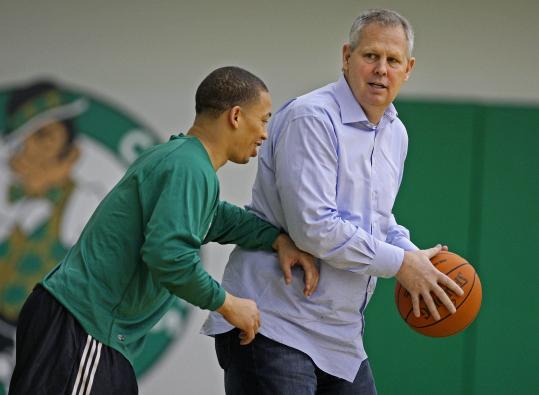 Tyronn Lue (left, with Celtics president Danny Ainge) no longer thinks of himself as a player, but rather a coach. (FILE/JIM DAVIS/GLOBE STAFF)
By Gary Washburn Globe Staff / July 19, 2012
Text size – +

LAS VEGAS — Two years ago, when Celtics coach Doc Rivers discussed the value of having Michael Finley on the roster, he mentioned the playoff-experienced sharpshooter was like a coach on the floor.

After hearing Tyronn Lue’s loud chatter with players during the interview, a reporter then asked if the presence of Lue was like having a player on the coaching staff. Rivers laughed, but indeed in his first year away from the NBA, Lue had every intention of playing again, and still carried the swagger of an NBA player, not an ex-player at the beginning of his coaching career.

Lue said he had no intention of pursuing coaching. He wanted to take a couple of years off after his 11-year playing career, enjoy life, and then determine a course for the future. That route did not include coaching, until the 2009-10 season.

While the Celtics advanced to the Finals, coming within one well-played quarter of winning a second title in three years, Lue transformed from an ex-player into a young, emerging coach. That change was methodical and arduous, with Lue having to adjust his relationships with some players to be perceived more as a coach and less as a peer.

Two years after dismissing coaching as a possibility, Lue is 6-1 with the Celtics’ summer league entry and has aspirations of being an NBA head coach. Last week in Orlando, as the Celtics won their first three games of a five-game slate, Lue joked that he should be given consideration for the vacant Orlando Magic coaching job.

He is joking now, but soon his aspirations will be serious. He has caught the bug, enjoying his time with the Celtics’ rookies, second-year players, and free agents, and pleased with his early success.

“When I played for Doc in Orlando, he just said when I’m ready to start coaching, I can come coach with him,” Lue said Wednesday as the Celtics enjoyed an off day at the Las Vegas Summer League. “I called Doc up when I was done and said I wanted to get into coaching, and the next day he had a job for me.”

Rivers was patient enough to allow Lue to grow comfortable on the bench. He increased Lue’s responsibilities in his second season to scouting reports, and Lue began to enjoy game preparation.

Coaching definitely wasn’t like playing. The level of competition was different, but it allowed Lue to pursue a new challenge.

“The first two years Doc gave me the chance to get the player out of me,” he said. “I was still doing what I have done because I wasn’t used to the coach’s life, the lifestyle, and I was so used to the playing days because that’s all I’ve done my whole life, and we were talking about working my way into it and when I’m ready to get serious, I’ll let him know. Last year was phenomenal. I took a lot of big steps, a lot of strides, doing scouting reports.”

On a February road trip, Rivers assigned Lue to coach the summer league team. And when the Celtics youngsters arrived in Orlando for practices at Rollins College, Lue was prepared, offering a laidback approach and opening practice to the media, something Rivers, visiting from his nearby home, chided Lue for doing.

But Lue has established his own style the last two weeks. While extremely talkative and lighthearted at practices, he is almost silent on the sideline. He told the players he wouldn’t ridicule them for mistakes and they have responded. Fab Melo, Jared Sullinger, and Kris Joseph have had their moments, while free agent Dionte Christmas may have earned an invitation to training camp.

“Coach has been great,” Christmas said. “He just tells us to play our game and stay within ourselves. For me, a guy trying to open some eyes, this has been a great opportunity.”

Lue still has no issue talking trash with Paul Pierce and Kevin Garnett. But he has changed his approach with younger players, seeking their respect first and friendship second.

“It’s been a great experience for me, just commanding a practice, running my own practice plan, commanding in timeouts, just joking with the guys and having fun, but when it’s time to be serious, be serious,” Lue said. “I’m getting very comfortable at doing this. My first couple of days in Orlando I wasn’t as comfortable, but going forward I’ve gotten a lot better. Last year, I took tremendous strides to becoming a head coach. The young guys, they look at me as Coach, but the other guys, we are the same age.

“That’s the first thing [Shaquille O’Neal] said last season, ‘How can I call you Coach? We played together, won championships together [with the Lakers].’ But this is definitely something I want to pursue and I definitely think I’ll get a chance. It will happen.”