Work over, but already looking ahead 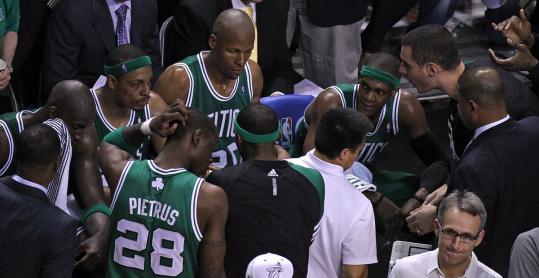 Mickael Pietrus is not easily discouraged. On a team of positive thinkers, Pietrus proved to be one of the more optimistic Celtics this season. Soon after the Celtics were eliminated from the Eastern Conference finals Saturday night, Pietrus was talking about going for a title next year.

“Our goal was to make it to the Finals,’’ Pietrus said after the Celtics’ 101-88 loss to the Heat in Game 7. “It was going to be hard but, at the same time, we had a great group. We worked hard throughout the entire series.

Asked about next season, Pietrus, an unrestricted free agent, replied, “Hopefully, everybody will be back. Next year, we look forward to work even harder and try to get that 18th [NBA championship]. My goal is to win a championship. I’m only 30. I want it to happen with the Boston Celtics.

“I’m going to fight for whoever I play for next year. I’m going to work hard this summertime. Every day [with the Celtics] is a part of history.’’

Pietrus was inconsistent in the playoffs, providing two key 3-pointers in the Celtics’ 94-90 win over the Heat in Game 5, but shooting only 12 for 54 (22.2 percent) on threes in the postseason. Pietrus was 12 for 19 on 2-point field goals.

The postgame scene in the Celtics’ locker room Saturday was emotional.

“My father passed away three years ago and I haven’t cried since, until tonight,’’ Keyon Dooling said. “It was memorable, lifelong friendships. This team is very unique. Though we aren’t champions this year, we have hearts of champions, and that will always keep us connected.’’

Said Brandon Bass: “This group of guys has been great to be a part of. We fought through so many different things. I love these guys. When you have a coach like Doc [Rivers], who gives it all to us, we leave it all on the court for him, as well.

“This group was like family. We had fights and ups and downs. But at the end of the day, we all fought for each other. I’m just grateful to be a part of this group. It’s big, the players and the coaches that I was around this year, and the experience that I gained. I am going to consider myself a veteran next year. The things I learned this year are just unbelievable.’’

Bass scored 16 points on 6-of-8 shooting in Game 7 and also defended LeBron James. Bass averaged 11.1 points in the postseason and led the Celtics in free throw percentage (92.2), third behind Paul Pierce and Kevin Garnett with 64 attempts.

“I would love to be back here,’’ said Bass, who has a player option for 2012-13. “For any player, this organization is the organization that you want to play for. A lot of different guys have been talking about retiring and different things, but it would be great to have this group back.’’

During his postgame remarks Saturday, the Heat’s Dwyane Wade referred to the Celtics’ “four future Hall of Famers.’’ High praise for Rajon Rondo, who had a big series . . . Game 7 on ESPN produced a 9.1 overnight rating, the highest for an NBA playoff game on cable since records started being kept in 2003. In Boston, the game had a 21.7 rating.