O’Neal is out for the season 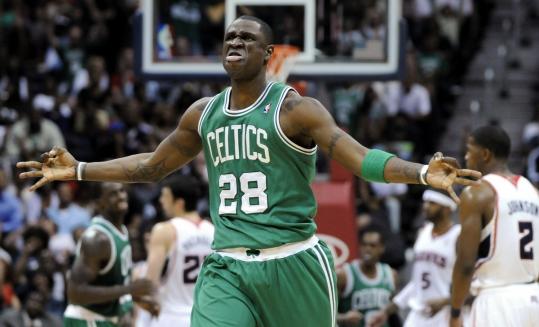 The Celtics’ Mickael Pietrus has this reaction after making a 3-point shot during the second half against the Hawks. (Tami Chappell/Reuters)
By Gary Washburn Globe Staff / March 20, 2012
Text size – +

ATLANTA - Jermaine O’Neal announced Monday he will have season-ending surgery on his sprained left wrist, likely ending his tenure with the Celtics. O’Neal landed awkwardly after taking a charge from the Mavericks’ Dominique Jones Feb. 20. O’Neal could have had minor surgery to alleviate the pain or taken a cortisone shot.

Doctors discovered a degenerative condition in O’Neal’s wrist, making the decision more complicated, according to a statement from the Celtics.

“Jermaine worked hard to get himself in condition to play this season despite his ongoing wrist issues,’’ president of basketball operations Danny Ainge said in the statement. “He played through pain the entire year and gave us all he could, but unfortunately after the fall against Dallas there simply wasn’t anything else he could do. We appreciate his contributions to our team over the last two years.’’

Coach Doc Rivers appreciated how O’Neal spent the past month trying to get himself back on the court.

“He tried to see if he could do it the other way besides surgery and he was smart enough to know that usually doesn’t work,’’ Rivers said. “He could have had surgery a month ago and shut it down but he tried to see what he could do to get back.’’

Kevin Garnett collected his 5,000th career assist Saturday night in Denver, then offered some rare reflection on his 17-year career.

“To be honest man, I’m not a stat guy,’’ Garnett said. “But any time you’re able to meet accomplishments in the league or reach milestones, you got to be grateful. I’m praising the man upstairs for giving me the ability, and management, Doc, coaches, [former Timberwolves coach] Flip [Saunders], and those coaches who have given me the opportunity to show my talent, the platform, so I can come out here and show many fans my craft.

“Lord knows I worked hard enough on it. Countless teammates I’ve played with, you just don’t reach milestones by yourself, you need help. I not only wanted to give thanks to coaches but former players that I played with, former teammates, great friends.

“So the milestone is a great one. I am very appreciative of it; someday it will be a big deal to me. I wish it could have transpired into some wins.’’

Garnett entered the NBA out of high school. He was the fifth pick in 1995 out of Farragut Academy in Illinois and emerged into one of the league’s most versatile big men.

“I’ve always told you guys what I am. My greatest strength is sometimes my greatest weakness,’’ he said.

“If you know anything about my personality, I’m not one-dimensional. I work really hard at understanding the game and trying to perfect my craft, every year trying to better myself, finding things I need to work on, staying motivated. Those are not easy things, staying healthy. Out of 17 years, I’ve only had one surgery.

“I’m blessed, man. This is by no means something you just wake up and it just happens.’’

Garnett will be 36 in May and has spent nearly half his life in the NBA. That is not lost on him.

“I think if I’m able to reach 38, I would have been in the league half my life,’’ he said. “Duration is everything, man. To be able to be still playing on this level says a lot. It’s not like I’m playing on some grand level but I am playing on a decent level to where it’s helping the team and I’m just trying to create different matchups and different mismatches night in and night out.’’

The Celtics expressed interest in Sacramento forward J.J. Hickson before the trade deadline, but he won’t be coming to Boston after the Kings bought him out Monday. An NBA source said Hickson has targeted a team, and it’s not the Celtics.

After a miserable stint with Sacramento, Hickson apparently wants to increase his marketability by playing more minutes. He likely would have come off the bench for the Celtics.

Rivers said the team is seeking two big men and is close to a deal with a player he did not name.

Greg Stiemsma played 19 minutes despite sitting out the shootaround because of a sore right foot. Stiemsma was injured March 9 against the Trail Blazers and has been wearing a walking boot after games since then. Stiemsma also suffered a cut on his hand in a collision with Atlanta’s ZazaPachulia . . . The Celtics will take Tuesday and Wednesday off because of a shortage of healthy bodies to practice. Their next game is Thursday at Milwaukee.