Report: Rondo back on block 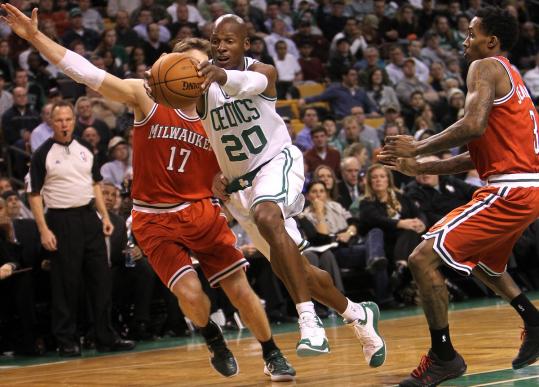 Ray Allen, who scored 15 points, had two hands on the wheel as he veered between a pair of Bucks in the first half. (Barry Chin/Globe Staff)
By Gary Washburn Globe Staff / March 1, 2012
Text size – +

Rajon Rondo’s future in Boston continues to be a story line as a report last night indicated the team is shopping its point guard and an NBA source said the Celtics are “listening’’ to offers.

An ESPN.com report said the Celtics have decided to trade Rondo after his attitude and personality have become too burdensome for the organization. An NBA source told the Globe the Celtics aren’t trying to dump Rondo but his name is being mentioned in deals, similar to the way it was when the team made a play for Chris Paul in December.

Rondo collected his 16th career triple-double and third this season in last night’s 102-96 victory over the Bucks. He has endured a difficult season with the trade rumors, an eight-game absence because of a sprained right wrist, and two because of a NBA suspension for throwing the ball at official Sean Wright.

Rondo also was upset at originally being left off the All-Star team and responded with one of his worst games of the season Feb. 10 against the Raptors in Toronto. On Tuesday in Cleveland he missed all six shots from the field and dished out 11 assists but committed five turnovers.

Last night he bounced back with 15 points, 11 rebounds, and 10 assists. Coach Doc Rivers lauded Rondo for his orchestration of the offense and pushing the pace. While he has shown flashes of brilliance, it’s uncertain if the organization feels it can begin the post-Big Three era around Rondo.

He has three years and $36 million left on his contract after this season.

Center Jermaine O’Neal saw a hand specialist yesterday but there is no timetable on his return from a sprained left wrist. O’Neal has missed nine days with the injury.

Bass got his second consecutive start at power forward while Garnett was shifted to center, a move Rivers said he was contemplating before the O’Neal injury. Rivers said he likes the team’s small lineup that allows Garnett to use his quickness against opposing centers, and Bass can beat opposing power forwards to the ball.

“I was thinking about doing this regardless, if you want me to be honest,’’ Rivers said. “In some ways, we’re a quicker basketball team.’’

A point on Stars

Ray Allen spent a rare All-Star weekend off in the Bahamas but couldn’t help but see the game because it was on all the televisions. The pickup style of play that resulted in a 152-149 score was unsavory for Allen to watch.

As usual, the All-Stars didn’t play seriously until there were about six minutes left, to make it a competitive game.

“It was too much,’’ said Allen. “The ball was going in the air and alley-oops. I’d rather see a competitive game, a guy who’s playing defense and they have pride enough to get stops.

“You’ve got great players on each side of the ball. So watching it unfold and seeing different strategies throughout the game, that’s what I like to see and I think that’s what the people like to see.

“From the days when I used to watch All-Star games, watching them play in an offensive set together is what made it more interesting.

“That’s what I want to see, as opposed to nobody playing defense and not getting back on defense and just throw the ball up and be a dunk contest.’’

The Bucks were without three key players last night, as Luc Mbah a Moute (sore left shoulder) joined Andrew Bogut and Stephen Jackson on the sideline. Bogut, a former No. 1 overall pick, has been out since Jan. 25 with a left ankle fracture. Jackson (sore right hamstring) has not made the expected impact with Milwaukee, being relegated to the bench because of the team’s depth. He has not played in the past three games . . . E’Twaun Moore was on the Boston inactive list for the second consecutive game. Moore’s impact has been minimal because of the improvement of Avery Bradley. Sasha Pavlovic and Marquis Daniels had been splitting time on the inactive list the past few weeks . . . Garnett began the game just 240 minutes from 45,000 for his career. He scored a team-high 25 points in 31 minutes in last night’s 102-96 victory. The all-time minutes leader is Kareem-Abdul Jabbar with 57,446.