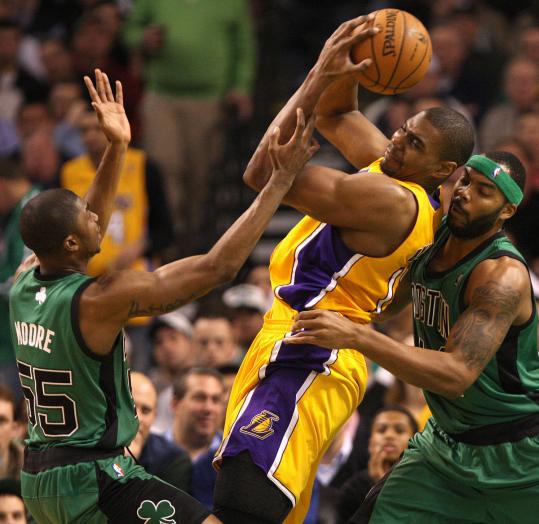 Ever since Kendrick Perkins went down underneath a Kobe Bryant-Andrew Bynum sledgehammer in Game 6 of the 2010 NBA Finals, the Celtics have been unable to match the Lakers’ inside game.

Both teams have changed personnel since then, but the Celtics are still struggling mightily to contend with the Bynum-Pau Gasol duo.

Not only did Bynum provide the deciding points and Gasol block Ray Allen’s follow just before the final buzzer last night, they helped their team to a 55-45 rebounding advantage in the Lakers’ 88-87 overtime win last night.

The Celtics actually did well to stay in contention, and had a legitimate shot at winning this game, despite surrendering 24 second-chance points. Bynum (16 points, 17 rebounds) and Gasol (25 points, 14 rebounds) were able to keep possessions alive or finish second-chance opportunities at several key junctures.

Three of the Lakers’ final six field goals were on follows, including Gasol’s tip in with 9.8 seconds remaining in regulation time and Bynum’s tip-in with 1:29 left in overtime.

“Just being active,’’ Gasol said of the Lakers’ offensive rebounding success. “[The Celtics] do a good job on being really aggressive loading the strong side of the floor. And, obviously, with Kobe creating so much attention, sometimes they took the bodies off us, and we just took advantage of that pursuing the ball and getting rebounds and putting them back.’’

Said Bynum: “We can always do that. I mean, Pau and I can definitely go to the glass and, a lot of times, guys are going to be smaller, so it’s just a priority to go to the glass. I mean, we’re supposed to crash. We’ve got guys that can get back.

“You know, [Rajon] Rondo’s a good guard, so he was able to push it a couple times, but for the most part we did OK with that.’’

Lakers coach Mike Brown made enough of the right tactical moves and was able to motivate Bynum for his team to come out on top.

“[Bynum’s] ability to rebound, seven offensive rebounds, and 24 second-chance points in a grind-it-out game is important, especially when they have the fast-break advantage,’’ said Brown.

“What I told him [yesterday] was ‘Every play - every play.’ If Andrew Bynum can figure out how to play every play like he’s a monster, he would be off-the-charts good for us. I thought whether he got touches or not, he kept coming.’’

As for Gasol, Brown said, “Pau is multitalented - he’s such a great passer, he’s a great shooter, he can hit the 17-foot shot. He’s so skilled on the post, he can do anything he wants on the block and, obviously, offensive rebound. So, for him to bring his complete game was definitely fun to watch and needed for us to win on the road in this environment.’’

Yet, the Celtics were shooting for the victory in the final seconds.

“That shot Ray Allen took at end of the game, that was good, in my opinion,’’ Brown said. “Pau did not stop playing until he heard the horn and he came up with the block.’’

Gasol said Allen’s follow was going in, “probably, for sure.

“He had momentum, he was going to the rim, he obviously has an amazing touch. And I continued to play and made a big play down the stretch, which could have cost us the game.

“You’ve just got to play until the clock runs out and that’s what I try to do. Because I’ve been in situations before in my career where you just freeze and catch yourself looking at the ball and somebody makes a play and you end up losing. So, I’m glad that I was able to play until the end and play a good game for my team.’’