Rivers happy to get Rondo back on point 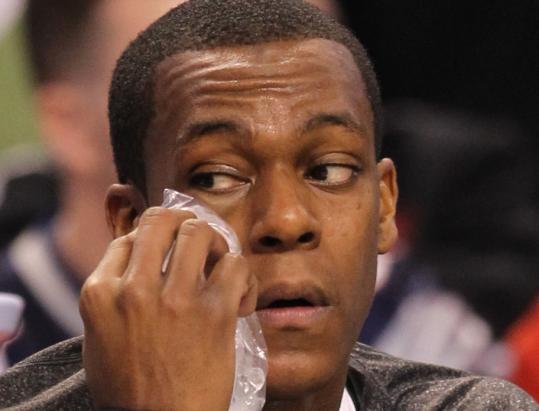 After missing eight games with a wrist injury, point guard Rajon Rondo returned to the lineup last night against the Knicks. The Celtics were able to go 6-2 in his absence. (Jonathan Wiggs/Globe Staff)
By Gary Washburn Globe Staff / February 4, 2012
Text size – +

The night began with an elbow to the right eye from Iman Shumpert, causing a swelling shiner he wore like a battle scar the rest of the game. Rajon Rondo was back last night against the Knicks, and although he was far from vintage form, he was good enough to contribute down the stretch in the 91-89 win.

Rondo, who missed the previous eight games with a sprained right wrist, convinced the team’s medical staff he was ready to come back. He appeared sluggish at times, missing three of four free throws and favoring the wrist on occasion, but he managed to make a key play when he re-entered in the fourth quarter.

Pestering Shumpert near the sideline, he knocked the ball away and forced the Knicks rookie into a loose-ball foul. Rondo then fed Ray Allen for two critical baskets that gave the Celtics a 90-85 lead. He finished with 7 points, 7 assists, and 5 turnovers in 34 minutes.

“I thought he played well,’’ coach Doc Rivers said. “I mean, he was rusty, obviously. And I thought he played a little gingerly with his hand at times. You know, we’ll assess it tomorrow and see how he feels and keep going. You don’t miss that amount of games and then don’t practice at all and then walk into an NBA game and play well. That’s just hard to do.’’

Rondo hadn’t played since Jan. 18, when a midair collision with Toronto’s Linas Kleiza sent him sprawling to the floor, and he landed awkwardly on his right wrist. The Celtics managed to go 6-2 in his absence, allowing Avery Bradley and E’Twaun Moore to gain much needed experience.

Last night, Rivers played Bradley nearly 16 minutes, including 6:34 of the fourth quarter. But what has hampered the Celtics during Rondo’s injury is fourth-quarter offensive execution because the offense was simplified for Bradley and Moore.

“The defense was great,’’ Rivers said. “Avery put amazing ball pressure on. And it was what we talked about - but then at the end of the game you needed a guy that could run the offense. So, they both did their jobs.’’

Rondo did not speak with the media after the game, but his teammates lauded his contributions.

“It was just good to have Rondo on the floor,’’ forward Chris Wilcox said. “We’ve been going through a good stretch of games and we’ve been winning and things like that and then to bring him back only helps our team. Tonight he was kind of timid, didn’t want to get his hand hurt, but he worked through it, he played hard and we came out with a W.’’

Meanwhile, swingman Marquis Daniels missed last night’s game with a sprained ankle sustained Wednesday against the Raptors. Daniels has essentially lost his minutes to Sasha Pavlovic, who has begun to find his offense in his past few appearances.

Daniels has struggled with his shot all season, making just 32.9 percent of his attempts, many of those close to the basket.

The Celtics had no one close to being an All-Star starter, with Rondo’s third-place showing in the voting at guard being the closest.

Rivers said he will lobby for Rondo and the Big Three of Paul Pierce, Ray Allen, and Kevin Garnett.

Pierce’s case will be the most interesting. He missed the first three games with a bruised right heel, then took two weeks to round into vintage form.

Allen and Garnett have played well in stretches but are likely to be passed up as reserves by more standout performers.

“I usually call [coaches]. I always do just to make sure,’’ Rivers said.

“And they call you. Last year [with four All-Stars] was just strange, really. I didn’t get one call from a coach last year asking me to vote for their guy. This year, I think I’m going to get a ton of calls. This year is going to be a lot tougher. There’s a lot of guys who are playing well.’’

Former Harvard standout Jeremy Lin has found a home with the Knicks after being released by the Warriors and Rockets. He played nearly seven minutes last night and scored 2 points. Lin made a nice spinning move to the basket before making a backhanded pass to Amare Stoudemire for his lone assist . . . Keyon Dooling was taking jumpers at shootaround and said he is feeling better. He has missed the past four games with a right hip pointer and his return is undetermined . . . Pierce is now 31 points from passing Larry Bird for second on the Celtics’ scoring list. Pierce has 21,761 after his 30-point outing last night. John Havlicek leads with 26,395 . . . Meanwhile, Garnett became the third player to collect 10,000 defensive rebounds (10,002) with six last night. He trails only Karl Malone (11,406) and Robert Parish (10,117) . . . Rivers picked up his fourth technical foul of the season, leading all NBA coaches.