THIS STORY HAS BEEN FORMATTED FOR EASY PRINTING
Cavaliers 88, Celtics 87

Cavaliers steal one from Celtics 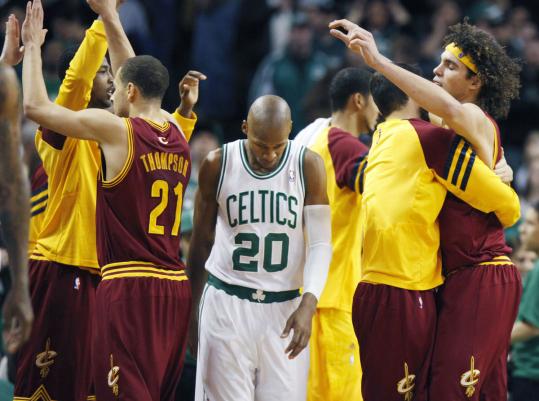 As the Cavaliers celebrated their 1-point victory at the Garden, Ray Allen and his mates knew they let one get away. (Matthew J. Lee/Globe Staff)
By Gary Washburn Globe Staff / January 30, 2012
Text size – +

While there is no question Kyrie Irving is headed for stardom, and his spinning, twisting, winning lefthanded layup perhaps quieted any doubters about his ability to thrive in the NBA after just 11 games at Duke, there were those in the Celtics locker room who were convinced last night’s game never should have come down to a final shot.

The Celtics had an 11-point lead over the Cavaliers at TD Garden with 4:25 left, and could taste a winning record after a horrendous start. But the Celtics shut down for the final third of the fourth quarter, going scoreless and allowing 19-year-old rookie Irving to steal the game with his heroics.

Irving’s layup with 2.6 seconds left was the difference as the Cavaliers scored the game’s final 12 points for a stunning 88-87 win, snapping Boston’s four-game winning streak.

The Celtics again seemed to have the complacency they’ve shown many times over the past few years against lesser teams. They needed one more play to seal the win, but Ray Allen missed an open layup, Kevin Garnett traveled after gathering an offensive rebound with a 1-point lead, and Paul Pierce thought he drew a foul on a pump fake with 1:53 left but it wasn’t called.

Pierce was angry after the game, most notably because he did not re-enter the contest until 3:42 was left after having been removed to begin the fourth. The Celtics were leading, 87-79, when Pierce checked in and did not score again.

“Maybe I should play a little bit more,’’ Pierce said when asked what the team can do to secure fourth-quarter leads. “I don’t know.’’

Asked if he was disappointed at coming into the game at the 3:42 mark, he said, “No comment.’’

When asked if coach Doc Rivers explained to him why he was held out so long, Pierce said, “No, it’s not his job to explain that. The coaches make their decisions. But at the time we had a pretty good lead, so I can understand. I can understand.’’

Pierce then was asked what the outcome would have been if he had re-entered earlier. “I wish I was a fortune teller,’’ he said. “I don’t think this would have been the outcome, though. I’m more upset with losing than not getting back in sooner. I would have liked to been in there to finish off the game but the coaches make their decisions. At the time you can understand when you have an 8-, 9-point lead, so it’s a double-edged sword.’’

The fourth-quarter numbers were ghastly for the Celtics. While the Cavaliers shot just 37.5 percent in the quarter, they attempted eight free throws, outrebounded the Celtics, 14-8, and scored 8 second-chance points. The late-game rally was built on pure hustle, and Celtics-killer Anderson Varejao finished with four rebounds in the final period, including a critical offensive board that secured another possession that set up the Irving winner.

Irving, who wowed the crowd at times with crafty moves that seemed well beyond his years, scored the winning basket and then raced to point to his father Drederick, a former Boston University point guard who watched the game courtside with many of his former college teammates.

“We just came with a lot of energy out of that last timeout,’’ said Irving, who had 8 points during the late run. “We knew that if we got a couple stops we’d be in the game. We just wanted to come out aggressive - especially when we needed that comeback. We were down 11 points, it was a tough comeback, but we carried it out and I’m really proud of my teammates.’’

While Rivers was more than happy to credit Irving for his sparkling finish, he blamed his team for relaxing down the stretch. Several times in the Big Three era, the Celtics have fallen into a trance when victory appeared a certainty.

“It was more we were trying to do too much with the ball instead of making simple plays . . . holding on to it, instead of [passing] to the next guy,’’ Rivers said. “And I thought that hurt us. I also thought we let our guard down. I told our guys, ‘Think about down the stretch, the last five minutes, how many “cute’’ plays we made. You know? No-look passes, behind-the-back passes. And they got deflected and we didn’t score on them. You lose games this way.’ And this was a bad loss for us. Not that it was Cleveland; it was that we had the game under control. And we didn’t take care of it.’’

The collapse ruined a stellar return from a three-game absence by Allen, who finished with a team-high 22 points on 4-for-6 shooting from the 3-point line. A streaking uncontested layup that he rammed too hard off the glass is what will stick with him. The layup bid, with 2:53 left, could have given the Celtics a 9-point lead. Instead, Varejao scored consecutive baskets to cut the deficit to 87-84 and the Celtics eventually were finished.

“I missed a layup,’’ Allen said. “We had those looks. With the lead that we had, if we got stops, it wouldn’t have mattered.’’